Mortgage applications increased 6.8 percent from one week earlier, according to data from the Mortgage Bankers Association’s (MBA) Weekly Mortgage Applications Survey for the week ending August 7, 2020.

Mortgage rates fell across the board last week, as investors grew less optimistic of the economic rebound given the resurgence of virus cases. Loan types such as the 30-year fixed, 15-year fixed, and jumbo all reached survey lows. Refi activity responded to these lower rates, with the refi share reaching almost 66 percent of all applications, its highest level since May. And the refi index jumped 9 percent, reaching its highest level since April, as both conventional and government applications for refinances increased,” said Joel Kan, MBA’s Associate Vice President of Economic and Industry Forecasting. “Home purchase activity continued its strong run with a 2 percent increase over the week and was up around 22 percent compared to the same week a year ago. While this was still positive news for the purchase market, the gradual slowdown in the improvement in the job market and tight housing inventory remain a concern for the coming months, even as low mortgage rates continue to provide support.”
…
The average contract interest rate for 30-year fixed-rate mortgages with conforming loan balances ($510,400 or less) decreased to 3.06 percent from 3.14 percent, with points decreasing to 0.33 from 0.39 (including the origination fee) for 80 percent loan-to-value ratio (LTV) loans.
emphasis added 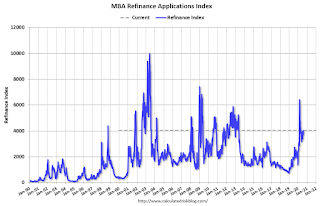 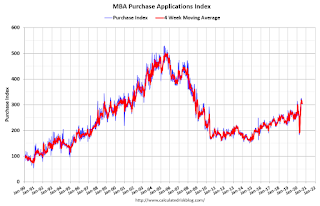 According to the MBA, purchase activity is up 22% year-over-year.