Added Kan, “Homebuyers were active the first week of the year. Purchase activity was 8 percent higher than a year ago, and the purchase index increased to its highest level since October 2009. Low rates and the solid job market continue to encourage prospective buyers to enter the market.”
…
The average contract interest rate for 30-year fixed-rate mortgages with conforming loan balances ($510,400 or less) decreased to the lowest level since September 2019, 3.87 percent, from 3.91 percent, with points decreasing to 0.32 from 0.34 (including the origination fee) for 80 percent loan-to-value ratio (LTV) loans.
emphasis added 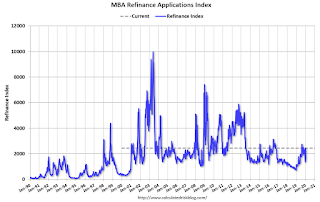 With lower rates, we saw a sharp increase in refinance activity, but mortgage rates would have to decline further to see a huge refinance boom. 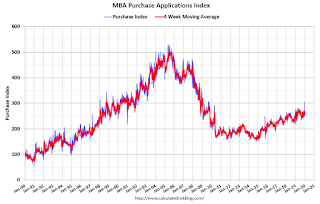 According to the MBA, purchase activity is up 8% year-over-year.

Note: Holiday adjustments are difficult, and there are frequently large swings around holidays.