MBA: “Mortgage Delinquencies Spike in the Second Quarter of 2020”

From the MBA: Mortgage Delinquencies Spike in the Second Quarter of 2020

The delinquency rate for mortgage loans on one-to-four-unit residential properties increased to a seasonally adjusted rate of 8.22 percent of all loans outstanding at the end of the second quarter of 2020, according to the Mortgage Bankers Association’s (MBA) National Delinquency Survey.

The delinquency rate increased 386 basis points from the first quarter of 2020 and was up 369 basis points from one year ago. For the purposes of the survey, MBA asks servicers to report loans in forbearance as delinquent if the payment was not made based on the original terms of the mortgage.

“The COVID-19 pandemic’s effects on some homeowners’ ability to make their mortgage payments could not be more apparent. The nearly 4 percentage point jump in the delinquency rate was the biggest quarterly rise in the history of MBA’s survey,” said Marina Walsh, MBA’s Vice President of Industry Analysis. “The second quarter results also mark the highest overall delinquency rate in nine years, and a survey-high delinquency rate for FHA loans.” 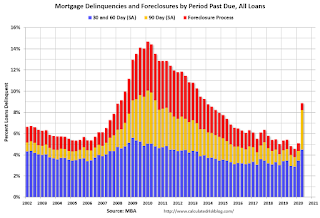 This graph shows the percent of loans delinquent by days past due.  Delinquencies increased sharply in Q2.

This sharp increase was due to loans in forbearance (included as delinquent, but not reported to the credit bureaus).

The percent of loans in the foreclosure process declined further, and was at the lowest level since at least 1985.