MBA Survey: “Share of Mortgage Loans in Forbearance Declines to 7.16%”

From the MBA: Share of Mortgage Loans in Forbearance Declines to 7.16%

The Mortgage Bankers Association’s (MBA) latest Forbearance and Call Volume Survey revealed that the total number of loans now in forbearance decreased by 4 basis points from 7.20% of servicers’ portfolio volume in the prior week to 7.16% as of August 30, 2020. According to MBA’s estimate, 3.6 million homeowners are in forbearance plans.
…
“The share of Ginnie Mae loans in forbearance increased again this week, as the current economic crisis continues to disproportionately impact borrowers with FHA and VA loans. As a result, IMB servicers, which have roughly one-third of their portfolio with Ginnie Mae, had a forbearance share that was unchanged, while depositories, which have a larger share of GSE and portfolio loans, saw a decrease,” said Mike Fratantoni, MBA’s Senior Vice President and Chief Economist. “The labor market continued to heal in August, with strong job growth and a large decline in the unemployment rate. However, the economy still faces an uphill climb and remains far away from full employment. High unemployment, and jobless claims consistently around 1 million a week, continue to cause financial strain for some borrowers – and especially for those who work in industries hardest hit by the pandemic.”

By stage, 35.76% of total loans in forbearance are in the initial forbearance plan stage, while 63.29% are in a forbearance extension. The remaining 0.94% are forbearance re-entries.
emphasis added 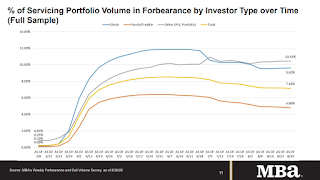 This graph shows the percent of portfolio in forbearance by investor type over time.  Most of the increase was in late March and early April, and has been trending down for the last ten weeks.

The MBA notes: “Total weekly forbearance requests as a percent of servicing portfolio volume (#) decreased relative to the prior week: from 0.10% to 0.09%, the lowest level reported for this series since March.”

There hasn’t been a pickup in forbearance activity related to the end of the extra unemployment benefits.