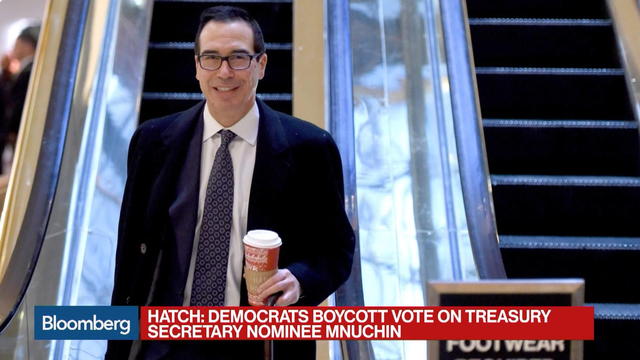 The nominations of Steven Mnuchin to lead the Treasury and Tom Price to run Health and Human Services ran into roadblocks Tuesday after Democrats staged a boycott as part of an intensified battle against some of President Donald Trump’s nominees.

The Senate Finance Committee was forced to scrap its planned votes Tuesday after Senate Democrats prevented a quorum over their complaints that the two men hadn’t provided complete information to the committee. Democrats also escalated their battle against Trump’s nominee for attorney general, Senator Jeff Sessions, stretching out a Judiciary Committee meeting with long speeches questioning the nominee’s independence.

Republicans were furious over the Democratic tactics, and some threatened to change the committee rules. Republican leaders could also try to bypass committee consideration and start sending nominees straight to the Senate floor for consideration.

“This is the most pathetic thing I’ve seen in my whole time in the U.S. Senate,” Finance Chairman Orrin Hatch of Utah said during the meeting. “I think they ought to stop posturing, and acting like idiots.”

The incident marked a new level of tension in the Senate over Trump’s nominees, particularly in the wake of a controversial executive order on immigration.

Democrats claimed both Mnuchin and Price didn’t tell the full truth during committee hearings. Senator Ron Wyden, the top Democrat on the committee, said Price received a sweetheart deal on shares of drugmaker Innate Immunotherapeutics Inc. as part of a private stock offer.

“We need to know the truth,” Senator Tom Carper, Democrat from Delaware, said. “Armed with the truth, we’ll move forward.”

As for Mnuchin, Wyden said the Treasury nominee denied that OneWest, the bank that he ran for more than five years, used an expedited method of processing foreclosure documents called “robo-signing” — despite court documents and testimony to the contrary.

“This is about getting answers to questions, plain and simple,” Wyden said in a statement. “Ethics laws are not optional, and nominees do not have a right to treat disclosure like a shell game.”

Senate Democrats said they’d vote when they have answers to all their questions on both nominees.

“We know they’re going to vote no, which I think in and of itself is reprehensible,” Hatch said to a mostly empty hearing room.

The delay on Price may further hurt Republicans’ efforts to unite around a plan to replace Obamacare, since GOP lawmakers are already in disarray on the issue and were counting on the nominee to help them once he is officially confirmed.

Trump has made far-reaching promises to replace Obamacare with something cheaper that provides insurance for everyone. Price has instead vowed everyone would have access to health insurance and hasn’t been willing to promise that no one would lose coverage under Republicans’ Obamacare replacement. In past legislation he introduced, Price has supported expanding health savings accounts and providing tax credits to help people afford insurance coverage.

The newfound resistance to Trump’s nominees was also seen in a straight party-line vote in the Senate Health, Education, Labor and Pensions Committee on the nomination of Betsy DeVos, his pick for education secretary. The Republican-led panel voted 12-11 on Tuesday to advance her nomination to the floor.

Chairman Lamar Alexander, a Republican from Tennessee, said he saw the days of inter-party cooperation on the panel coming to a quick end. Among other things, Democrats argued DeVos performed poorly in her confirmation hearing, would gut public schools in favor of vouchers and appeared to plagiarize some answers to written questions submitted to the committee on Monday night.

“I have the greatest respect for Senator Murray and for each member of this committee, I prize the fact that we’ve been able to resolve those differences in a good and civil way in the past and I hope we can get back to that way,” Alexander said, referring to ranking Democrat Patty Murray of Washington. “But I think I have to face the facts.”

Carper, the top Democrat on Senate Environment and Public Works Committee, said Tuesday that Democrats may boycott a planned vote Wednesday on the nomination of Scott Pruitt to lead the Environmental Protection Agency, a move that would deprive the panel of a needed quorum. Carper said the nominee has yet to provide answers to senators’ questions.

Earlier Tuesday, the Senate Energy and Natural Resources Committee approved Rick Perry to be Energy secretary on a 16-7 vote, and it backed Representative Ryan Zinke to run the Interior Department in a 16-6 vote.

The full Senate also voted Tuesday to confirm Elaine Chao to run the Department of Transportation in a 93-6 vote. Chao, a former Labor secretary, is married to Senate Majority Leader Mitch McConnell.