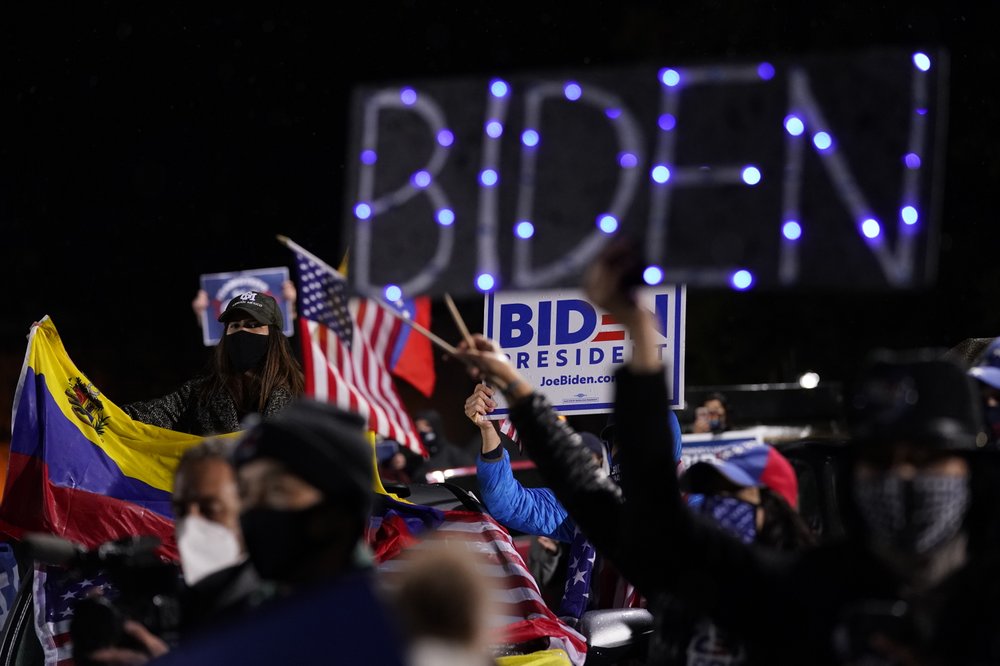 Bitter pandemic-hit 2020 campaign draws to a close with US facing a crossroads; Bruised and haunted, US holds tight for next chapter

America stands at a crossroads on Election Day eve, never before in modern history facing a choice between two candidates who offered such polar opposite visions in a time of such great and existential stakes amid a confluence of crises.

Donald Trump and Joe Biden are poised today to give their closing arguments, their last chance to sway any undecided voters as to why each would be best to steer the nation confronted with a once-in-a-century pandemic, the starkest economic contraction since the Great Depression and a citizenry toxically divided on cultural and racial issues. Jonathan Lemire, Zeke Miller, Will Weissert and Alexandra Jaffe report.

Trump’s final day has him rushing through five rallies from North Carolina to Wisconsin. Biden will be devoting most of his time to Pennsylvania, where a win would leave Trump with an exceedingly narrow path to victory. Biden will also be dipping into Ohio, a show of confidence in a state that Trump won by 8 percentage points four years ago.

The Campaign: Americans are bracing for a moment of truth, a crash landing, perhaps a crystal clear look in the mirror, as Trump and Biden race across the country in the final hours. The campaigns that began before Trump’s impeachment and acquittal are ending with a nation battered by the coronavirus and haunted by racial injustice. Images of confrontations between protesters, get-out-the-vote volunteers and police are putting people on edge. Many say they fear what comes after, since Trump has refused to commit to leaving office if he loses, Laurie Kellman reports.

The Race: Both parties can agree on one thing: The stakes in the White House race are higher than at perhaps any point in modern American history. The candidates have taken pride in their differing visions for the nation, including their approach to the pandemic. Even before Tuesday’s election, over 90 million Americans have already cast ballots through early voting. That’s shattered records in the U.S. for advance voting. The choice before voters is a shaping up as referendum on the role of the presidency itself and a test of the sturdiness of democracy, AP Washington Bureau Chief Julie Pace writes.

Trump on the Issues: Expect a lot more of the same if he wins a second term.

Trump vs. Fauci: The president suggested at a Florida rally that he will fire Dr. Anthony Fauci after the election, as his rift with the nation’s top infectious disease expert widens while the U.S. sees its most alarming surge of new infections since the spring, Zeke Miller reports.

Key Questions: Election Day is nearly upon the U.S. but critical questions still linger as the final votes are cast and counted. What do Americans want from a president? Whose turnout approach will win? Will voting be peaceful? Is 2020 more like 1968 or 1980? Bill Barrow reports.

Legal Challenges: Signature matches. Late-arriving absentee votes. Drop boxes. Secrecy envelopes. Democratic and Republican lawyers already have gone to court over these issues in the run-up to Tuesday’s election. But the legal fights could take on new urgency, not to mention added vitriol, if a narrow margin in a battleground state is the difference between another four years for Trump or a new Biden administration. Both sides say they’re ready, with thousands of lawyers on standby, Mark Sherman reports.

Paris Withdrawal: The U.S. is out of the Paris climate agreement on the day after the election. Experts say the outcome of the vote will determine to some degree just how hot the entire world will get in the future. The candidates have stark differences on fighting human-caused climate change. Biden has promised to return the U.S. to the agreement, while Trump took the country out of the 189-nation accord, Seth Borenstein reports. 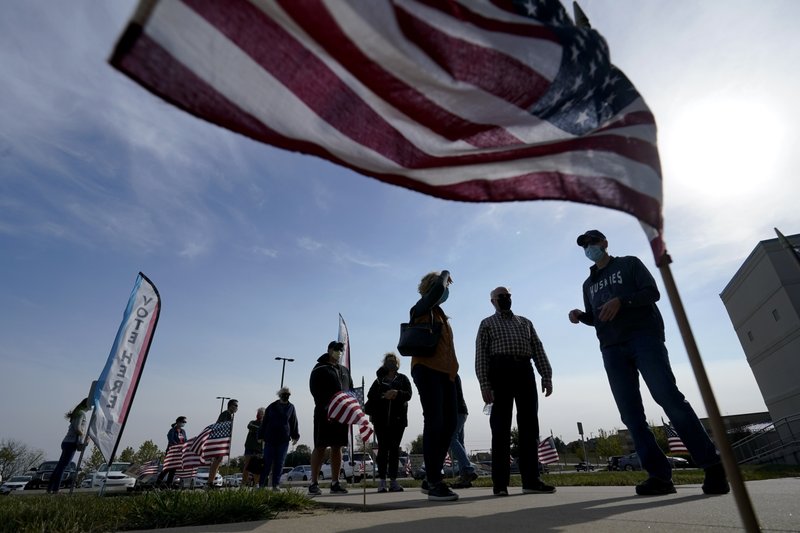 AP Explains: What you need to know about a complicated election night and beyond; AP plans openness on race calls

It has already been a U.S. presidential election like no other, with myriad potential complications and a slew of chaotic factors at play, including possible challenges, irregularities or even violence.

There are many confounding questions. Here are some answers from the AP’s reporters and editors:

Knowing the Results: It’s possible the world may not know the results of the U.S. election on Election Night – or for a while afterward. Why?

The 270 Factor: You hear it everywhere: the number 270, the Electoral College threshold for winning the presidency. How does that break down?

Road to 270 Map: An interactive capturing the number of electoral votes garnered by previous Republican and Democratic presidential contenders. Readers can view the past electoral results and come up with their own predictions.

Unprecedented or Not: Everybody’s talking about how different the 2020 election is, how it’s unlike any other in recent memory. What makes it so?

Voting in 1800: This tempestuous election has been rife with predictions of confusion and cataclysm, with warnings that a contested battle could last well into December. It’s happened before. Take 1800, for example.

Unpopular Victors: Five times in U.S. history, candidates have lost the popular vote but won the presidency — most recently in 2016. Could Trump be the first to do it twice? A look at the previous instances in which the person who got the most votes didn’t win the nation’s highest office.

INTERACTIVE: The facts about voting early, by mail or absentee.

VIDEO: What you need to know about your voting rights on Election Day.

VIDEO: How the votes will be counted on election night.

Senate Control: Thirty-five U.S. Senate seats are on the ballot and will determine which party controls the chamber for the next two years. But due to election law quirks in Georgia and Louisiana, where a total of three seats are up for grabs, it is possible that the fate of the current 53-47 Republican majority will remain unknown for weeks.

51 Elections: A major misconception about the vote for U.S. president is that it is a national election. It’s not. Instead, it consists of 51 elections — one in each state and in the District of Columbia. And that’s more than a technical difference.

The Transition: No matter what happens in the election, there will be a limbo period between who wins and who takes office on Jan. 20, 2021. What will that time look like – whether Donald Trump or Joe Biden wins?

Inaugural Planning: The inauguration of an American president is a large and complex affair – and only more so during a pandemic. How will planning it work?

How it’s Called: How does AP call a race? What’s the process behind it?

Show Your Work: AP plans to peel back the curtain and let people know how our experts declare winners and losers on election night. In so doing, the AP is joining with U.S. television networks, who also say they plan to be more transparent with viewers and show how conclusions are drawn. The intense interest and anxiety over the 2020 presidential election, and the complicating factor caused by early voting, have led to a new openness. The AP will explain its calls in stories that accompany the decisions and make top executives available publicly to discuss why decisions are being made.

Here’s the one-stop browsing location for all the AP Election Explainers. 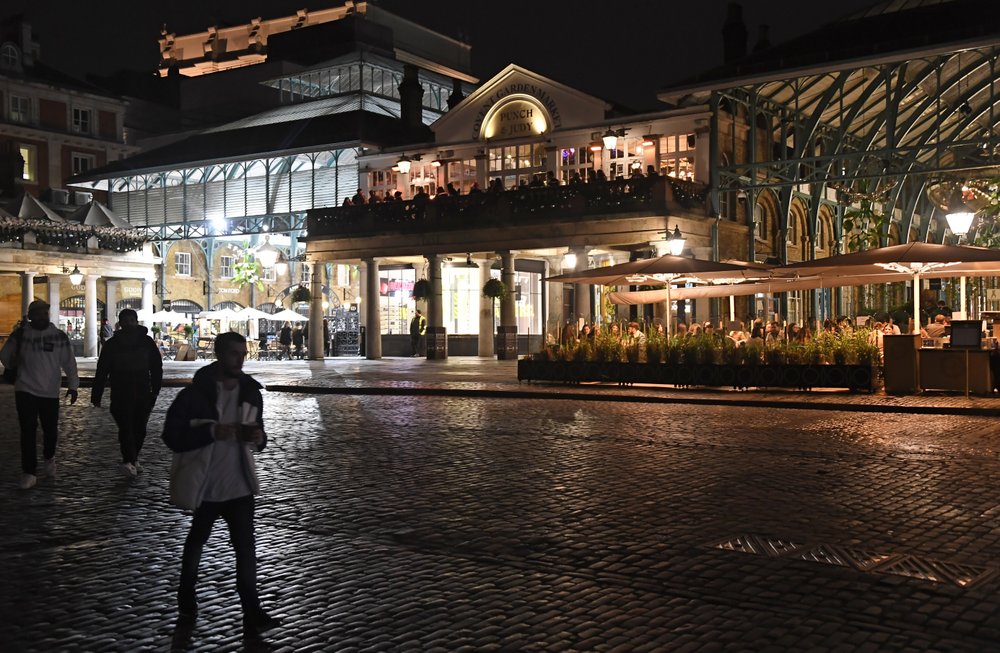 A relentless surge in coronavirus cases across the United States, including in key presidential battleground states, has created mounting health and logistical concerns for voters, poll workers and political parties ahead of Election Day.

In Iowa, county officials are preparing for scores of confirmed or potentially infected people to vote curbside. In Wisconsin, the governor sought to assure voters in the critical swing state that going to the polls would not be risky, even as officials announced more than 5,000 new coronavirus cases, Ryan J. Foley reports.

In the meantime, five of the six states with the nation’s lowest unemployment rates are in the Midwest, have Republican governors and have almost no restrictions intended to slow the spread of the virus, Josh Funk reports.

Plasma Contract: An AP investigation has found that the Trump administration awarded emergency coronavirus funds to a well-connected Republican donor’s company to test a possible COVID-19-fighting blood plasma technology. In discussing the contract, the administration noted Plasma Technologies LLC’s “manufacturing facilities” in Charleston, South Carolina. AP found that Plasma Tech has no manufacturing facilities in Charleston. Instead, the company exists within the luxury condo of its owner, Eugene Zurlo. Now, the tiny company may be in line for as much as $65 million in taxpayer dollars.  Richard Lardner and Jason Dearen have this exclusive story.

UK Lockdown: The British government says a new national lockdown in England may have to last longer than the planned four weeks if infection rates don’t fall quickly enough. The lockdown announced by Prime Minister Boris Johnson is to run from Thursday until Dec. 2.. Under the new restrictions, bars and restaurants can only offer take-out, non-essential shops must close and people must remain at home except for exercise and essential tasks. Hairdressers, gyms, golf courses, swimming pools and bowling alleys also have to shut. Jill Lawless reports from London.

Brazil: Protesters have gathered in the country’s two biggest cities to demonstrate against any mandate for having to take a coronavirus vaccine, supporting a rejection campaign encouraged by President Jair Bolsonaro that counters the advice of most health professionals, Christiana Sciaudone reports from Sao Paulo.

Mexico: Diminutive figures of skeletons in face masks and medical caps are all too common on Day of the Dead altars this year. More than 1,700 Mexican health workers are officially known to have died of COVID-19 and they are being honored with three days of national mourning. Amnesty International says Mexico had lost more medical professionals to the virus than any other nation. Lissette Romeo reports from Mexico City.

US Day Care Rules: As more families in America jump back into group day care this fall to restart lives and careers, many parents, pediatricians and care operators are finding that new, pandemic-driven rules offer a much-needed layer of safety but also seem incompatible with the germy reality of childhood, Sally Ho reports. 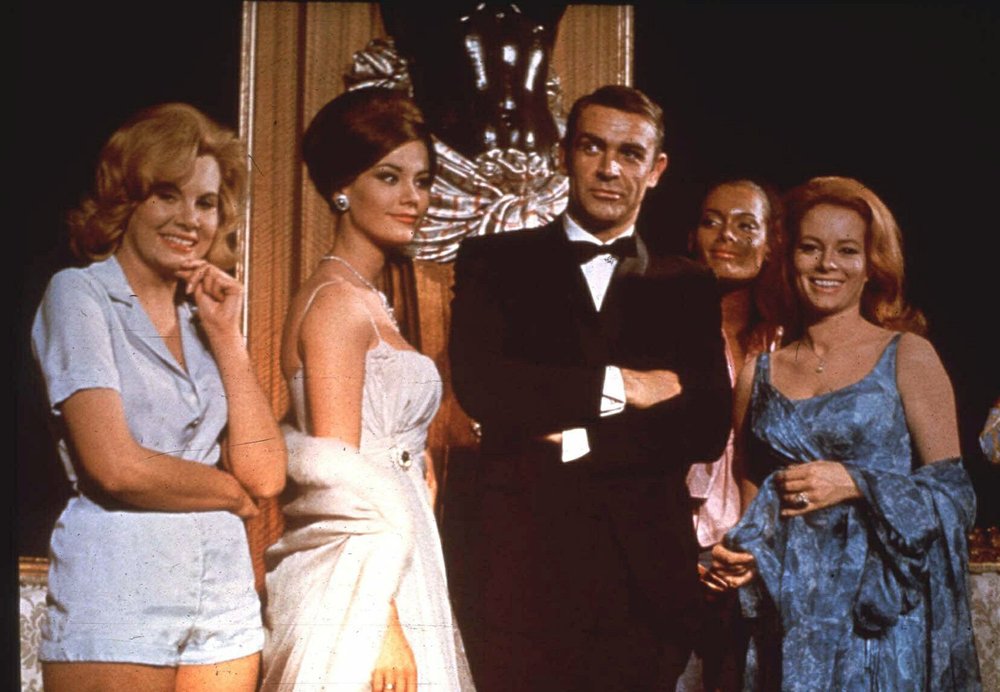 A lion of cinema whose roar went beyond 007

An Appreciation: To glimpse Sean Connery’s magnetism, you might turn to a photograph of him in a tailored suit, leaning against an Aston Martin. You’d probably get more of his menacing charisma by pulling up the “Chicago way” scene from “The Untouchables.” It might be enough simply to say: “The king is dead,” AP Film Writer Jake Coyle reports.

As a lion of movies for half a century, Connery’s talent was manifest. He was famously cast as James Bond without a screen test. And from then on, in even his lesser films, Connery was never out of place on screen. His presence was absolute.

The Scottish actor widely considered to be the best 007 of all died at 90 on Saturday.