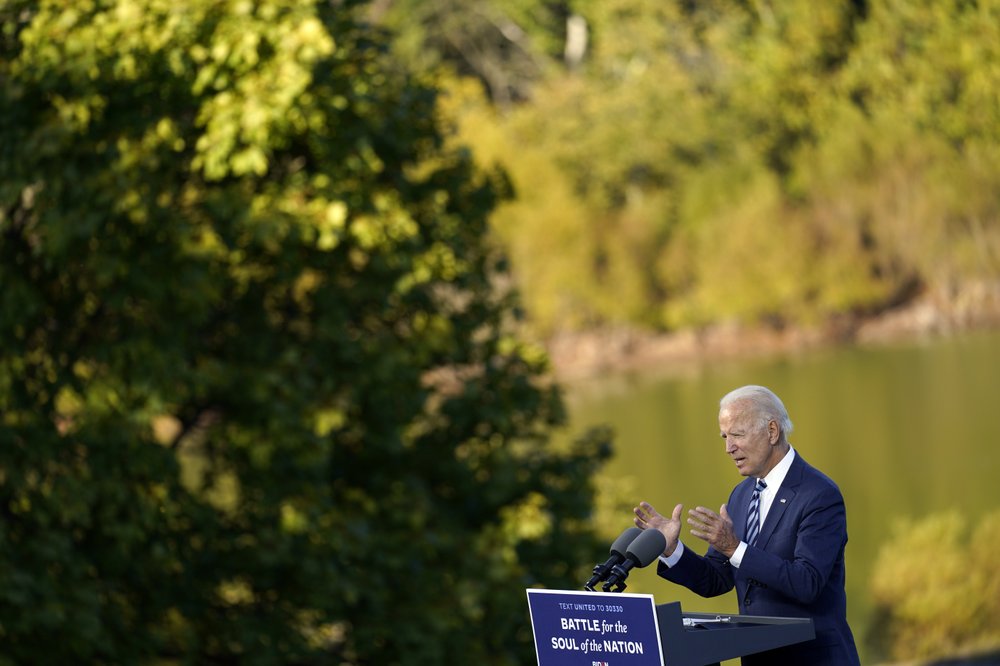 Three weeks before Election Day, President Donald Trump’s campaign has been left reeling by a series of self-inflicted calamities.

That’s rattling his base of support and triggering alarm among Republicans that the White House is on the verge of being lost, report Jonathan Lemire, Zeke Miller and Jill Colvin.

This account of Trump’s reelection effort was compiled from interviews with nearly two dozen White House and campaign officials and Republicans close to the West Wing, many of whom were not authorized to publicly discuss private conversations.

Stricken and sidelined from the campaign trail for more than a week, Trump now faces a massive financial disadvantage, stubborn battleground state deficits in polling, the first possible signs of an intraparty mutiny and, most daunting of all, an acute shortage of time.

Advisers privately concede that Trump, who has not moderated his tone on the virus after getting sick, has little chance of victory without Florida, which will be the site of his first post-diagnosis rally later today. And a loss in Arizona would require Trump to hold on to Pennsylvania.

America Disrupted: Aides say Trump’s campaign has seen an alarming drop in support among older adults. The campaign’s worries are supported by some public polls suggesting that Joe Biden could perform better among seniors than Hillary Clinton did four years ago. The shift appears to be driven largely by Trump’s handling of the virus, which affects these voters more than others. Nowhere is the battle for the election more evident than in The Villages, the nation’s largest retirement community, located in the all-important swing state of Florida, from where Tamara Lush reports.

VIDEO: A warning sign for Trump: ‘Go Biden’ at The Villages.

Biden’s Moment: Presidential hopefuls tend to declare every upcoming election the most important one that voters have faced in their lifetime. Joe Biden has ratcheted that up even further. The Democratic nominee portrays 2020 as an entanglement of social, economic, political, environmental and public health crises as threatening to America’s stability as the Civil War and the Great Depression.

Biden pointed to the presidents of those times — Abraham Lincoln and Franklin D. Roosevelt — for inspiration, even using one of the nation’s most hallowed battlefields, where Lincoln delivered his Gettysburg Address in 1863, as a backdrop for his closing argument against Trump.

Refashioning Lincoln’s words, Biden added: “It cannot be that here and now, in 2020, that we will allow the government of the people, by the people and for the people to perish from this Earth. It cannot, and it must not.” Bill Barrow reports from Gettysburg.

Biden is set to visit Ohio today, a clear signal the former vice president has high hopes of winning the state after Democrats lost by a significant margin in the 2016 election. 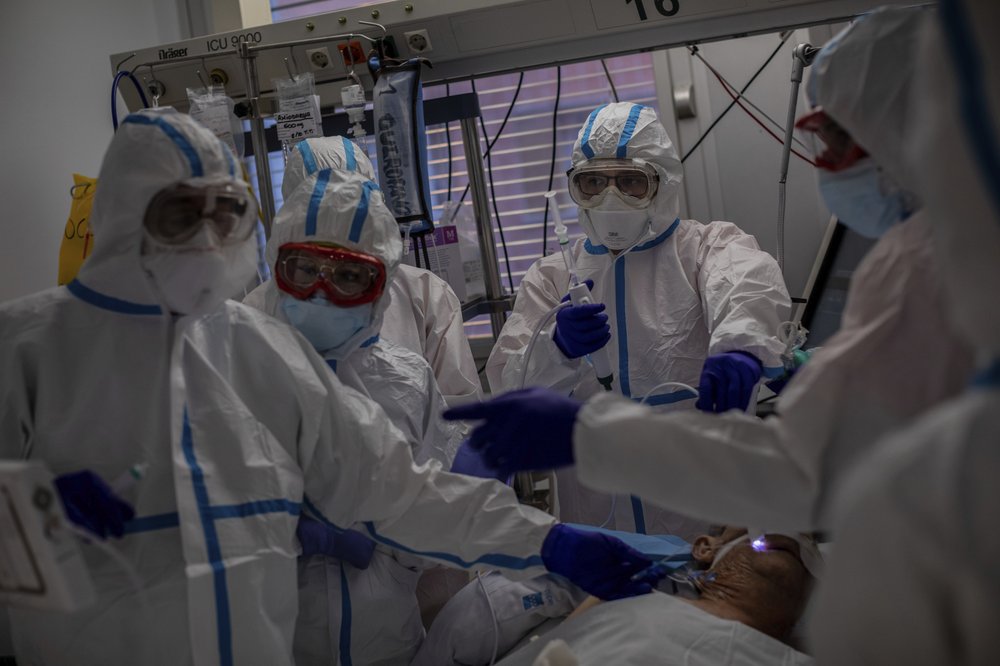 ”We are in the fall wave without having resolved the summer wave.” That’s how a viral immunology expert with Spain’s top research body describes an increasingly critical situation.

Europe’s second wave of coronavirus infections has struck well before flu season even started, reports Nicole Winfield. Intensive care wards are filling up again and bars are shutting down.

And authorities say a widespread case of “COVID-fatigue” is making matters worse.

Spain declared a state of emergency for Madrid amid increasing tensions between local and national authorities. Germany offered up soldiers to help with contact tracing in newly flaring hotspots. Italy mandated masks outdoors and warned that for the first time since it became the European epicenter of the pandemic, hospitals are filling up again.

The Czech Republic’s “Farewell Covid” party in June, when thousands of Prague residents dined outdoors at a 500-meter-long table across the Charles Bridge to celebrate their victory over the virus, seems painfully premature now that the country has the highest per-capita infection rate on the continent.

Britain Lockdown: Millions of people in northern England are waiting to hear whether they will be put under tighter restrictions in the coming days.  Prime Minister Boris Johnson is expected to announce in Parliament today a three-tier local lockdown system. Under the new rules, the country will be placed into “medium,” “high” and “very high” alert levels. Details haven’t been confirmed, but the highest level is widely expected to involve the closure of pubs and restaurants and the banning of household mixing, both indoors and outside, among other measures, Pan Pylas reports from London.

U.S. Virus Health Bills: COVID-19 can do more than torment patients physically. It also clobbers some financially. Even though many insurers and the U.S. government have offered to pick up or waive costs tied to the virus, holes remain for big bills to slip through and surprise patients. People who weren’t able to get a test showing they had the virus and those who receive care outside their insurance network are particularly vulnerable.  Who provides the coverage and how hard a patient fights to lower a bill also can matter. Tom Murphy has that story. 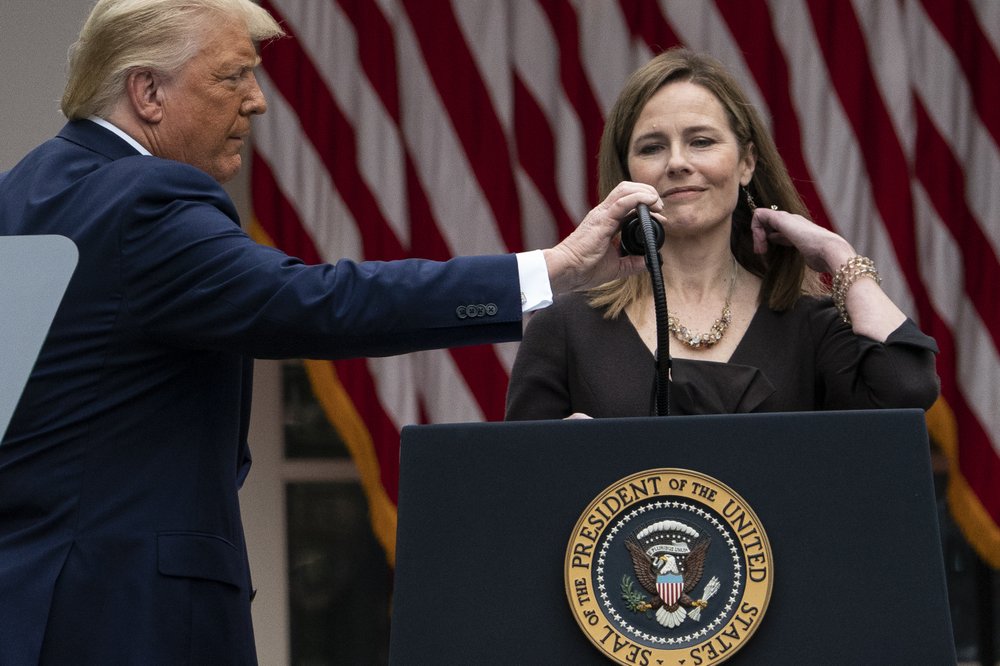 Republicans, who control the Senate, are moving at a breakneck pace to seat Barrett before the Nov. 3 election, to secure Trump’s pick and hear a high-profile challenge to the Affordable Care Act and any election-related challenges.

Democrats are trying in vain to delay the fast-track confirmation by raising fresh concerns about the safety of meeting during the pandemic after two Republican senators on the panel tested positive for the coronavirus.

In prepared remarks for the Judiciary Committee hearing, which the AP obtained, the federal appeals court judge says :“Courts are not designed to solve every problem or right every wrong in our public life.”

The three days of hearings are like no others before them with voting underway in many states and the country in the grips of the pandemic, Mark Sherman, Lisa Mascaro, Mary Clare Jalonick and Mike Balsamo report.

Barrett’s Faith: Her affiliation with the Christian community People of Praise is drawing scrutiny because of its ultraconservative views on women. Her defenders say examining her beliefs and relationship to the mostly Catholic organization is akin to anti-religious bigotry. But in interviews with a dozen former members of the organization or alumni of the schools it runs, most told the AP that her association with the organization is relevant. Some are excited. Others are concerned. Some wonder why Barrett hasn’t disclosed or even acknowledged her connection to People of Praise. Michelle R. Smith reports.

Graham’s last stand?  Senate Judiciary Committee Chairman Lindsey Graham is wielding the gavel in the performance of his political life. Once a biting critic of Donald Trump, the three-term South Carolina Republican opens the confirmation hearings for  Barrett just three weeks before Election Day. It could be a last stand for Graham as well as Trump, who are both struggling to win reelection, reports Laurie Kellman. 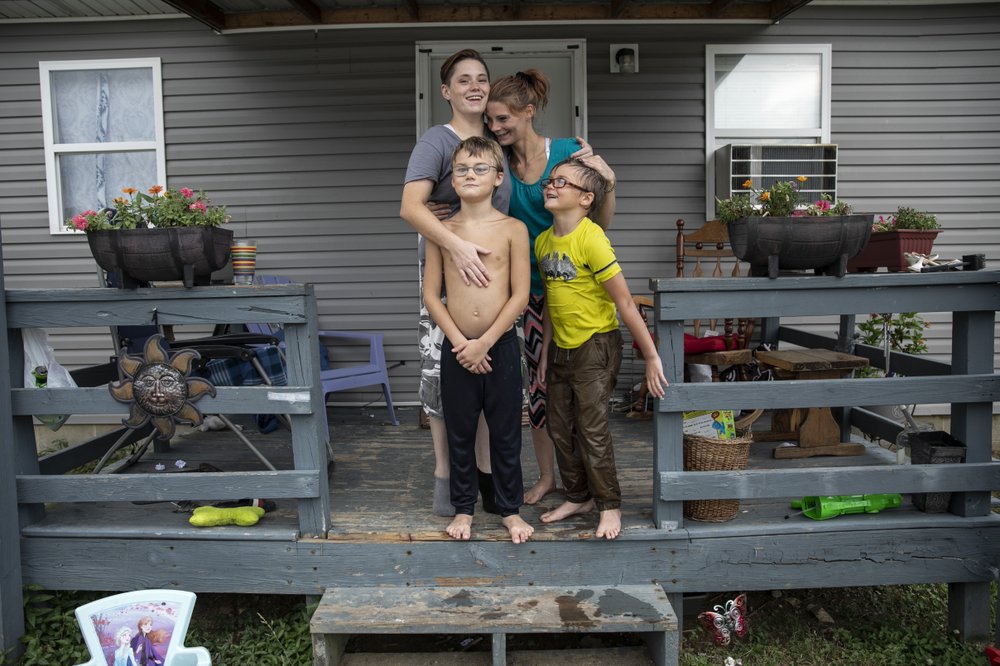 Looking for America: A Photo Essay

“I got stories.” A life of troubles, and a story of love

Tasha Lamm’s problems could seem overwhelming: poverty, unemployment, an abusive mother, a boyfriend who died of a heroin overdose. But Lamm is far more than the sum of those difficulties. She can seem almost unbreakable.

During the AP’s road trip across the U.S., the three-person team met Lamm in a little town in Appalachian Ohio as they tried to make sense of an America upended by the pandemic, unemployment, protests and the brutal politics of the upcoming elections.

Lamm humbled the photographer, Wong Maye-E, who says Lamm is smart, strong and organized, and these photographs try to capture that. She says Lamm has taken the little she has and made a life out of it for herself, her girlfriend and her two kids. In the end, it wasn’t the struggles of the little family that stood out most in that little house. It was love.

“I got stories,” Lamm said when they first met her. And she did.

Azerbaijan has accused Armenia of attacking its cities and villages in violation of the cease-fire brokered by Russia to end to the worst outbreak of hostilities in the separatist Nagorno-Karabakh region. It said that nine civilians were killed and over 30 wounded. Nagorno-Karabakh’s military officials said the territory’s army is observing the cease-fire and accused Azerbaijani forces of shelling the region overnight. The latest fighting between Azerbaijani and Armenian forces marks the biggest escalation since 1994. Nagorno-Karabakh lies in Azerbaijan but has been under the control of ethnic Armenian forces backed by Armenia.

Louisiana vows to rebuild in the wake of Hurricane Delta

Utility crews in Louisiana are scrambling to restore power, and residents in the besieged southwest part of the state are vowing to rebuild after being battered by Hurricane Delta. Louisiana officials have attributed the deaths of an 86-year-old man and a 70-year-old woman to the hurricane. The remnants of Delta were also blamed for a drowning in Florida. Delta made landfall Friday before moving over Lake Charles, still reeling from Hurricane Laura.

The winner of this year’s Nobel Prize in economics will be announced today. It comes as much of the world experiences the worst recession since World War II because of the impact of the coronavirus pandemic. The award caps a week of Nobel Prizes and is technically known as the Sveriges Riksbank Prize in Economic Sciences in Memory of Alfred Nobel.  The announcement is at 545 a.m. Eastern/945 GMT. You can click the link above to see who has won and for all the coverage.

LeBron James and the Los Angeles Lakers are back atop the NBA world, champions again, beating the Miami Heat 106-93 to end the NBA Finals in six games. It’s the 17th championship for the Lakers, tying Boston for the most in league history. And it’s the fourth crown for James, who has now carried three teams to championships. It caps a season where the league dealt with the pandemic, created a bubble and said farewell to Lakers legend Kobe Bryant — to whom this L.A. playoff run was dedicated.