Need to Know: As 2021 approaches, watch out for a 1999-style stock-market correction, says strategist

Need to Know: As 2021 approaches, watch out for a 1999-style stock-market correction, says strategist

As 2021 approaches, watch out for a 1999-style stock-market correction, says strategist 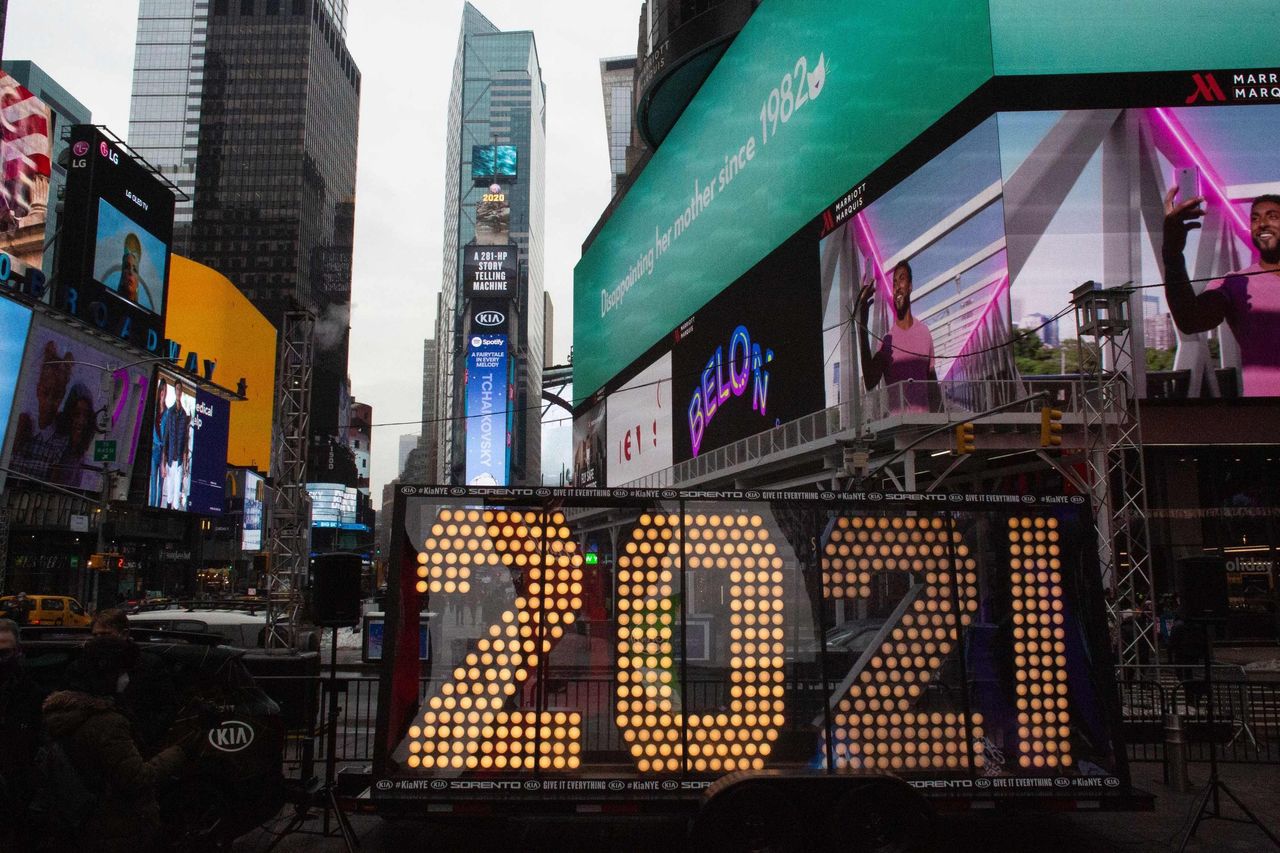 Welcome to the last trading week of 2020, a year we can’t see the back of fast enough. Stocks are pointing higher after President Donald Trump signed that $900 billion stimulus bill, despite 11th hour demands for bigger relief checks.

With just a handful of trading days before the year finishes, our call of the day says investors need to brace for a bumpy start to 2021 if we close out the year with stock-market records.

It’s been an “unprecedented year for financial assets,” with equity markets melting down earlier this year on the COVID-19 pandemic, followed by an impressive surge as authorities poured on the stimulus, notes John Hardy, head of FX strategy, at Saxo Bank.

“Market historians looking back to another incredible year—1999—in which the S&P 500 closed the year at a new all-time high, will recall that the initial few days of the year 2000 saw a vicious correction. Yes, times were different, and the focus then was on Y2K and the concentrated bubble of the time, but investors need a reminder that even during major bull market runs, one can see significant setbacks,” Hardy said, in a note to clients that published Monday.

Fresh closing highs hardly look like a far-fetched idea for Monday’s session. On Thursday, the S&P 500 closed just 0.5% off its record close of 3722.48 seen December 17. Stock futures are indicating the S&P may not open too far away from that level.

Stock futures YM00ES00NQ00are higher. London markets are closed for an extended bank holiday, while European markets XX:SXXPare up, helped as well by last week’s post-Brexit trade deal, which is giving sterling GBPUSD a big boost. Asian markets
mostly rose, and bitcoin BTCUSD is hovering at $26,000, after topping a record $28,000 over the Christmas weekend. But is it right for your portfolio?

President Trump signed the stimulus bill, but also said Congress would vote on lifting individual stimulus payments to what he wanted — $2,000—from the agreed $600. House Speaker Nancy Pelosi said she would hold another vote on Monday, but Republicans blocked such an effort last week.

Alibaba BABA HK:9988upped its stock buyback program from $6 billion to $10 billion, but shares of the e-commerce giant fell nearly 8% in Hong Kong, continuing to suffer from an antitrust probe by Chinese regulators. Over the weekend, authorities also demanded online finance platform Ant Group, of which Alibaba owns a 33% stake, clean up its business and present a plan for that, after suspending its stock debut last
month.

The EU’s COVID-19 vaccine campaign kicked off over the weekend. U.S. officials are “very seriously” looking at a new strain of the virus in the U.K., says the government’s top infectious disease expert, Dr. Anthony Fauci. He also warned of a possible “surge upon a surge” after Christmas in the U.S.

U.S. holiday spending rose 3% from October 11 to December 24, according to the Mastercard Spending Pulse survey. The biggest jump was seen in home furniture and furnishings, while apparel spending fell.

The man believed to be responsible for the Christmas Day Nashville bombing is believed to have died in the blast, say investigators.

With a “slightly larger” and “earlier” stimulus package now approved, Goldman Sachs has lifted its U.S. growth forecasts. A team led by chief economist Jan Hatzius, now predicts first-quarter 2021 growth of 5%, versus 3% previously, and “meaningfully higher levels of output in all four quarters.” 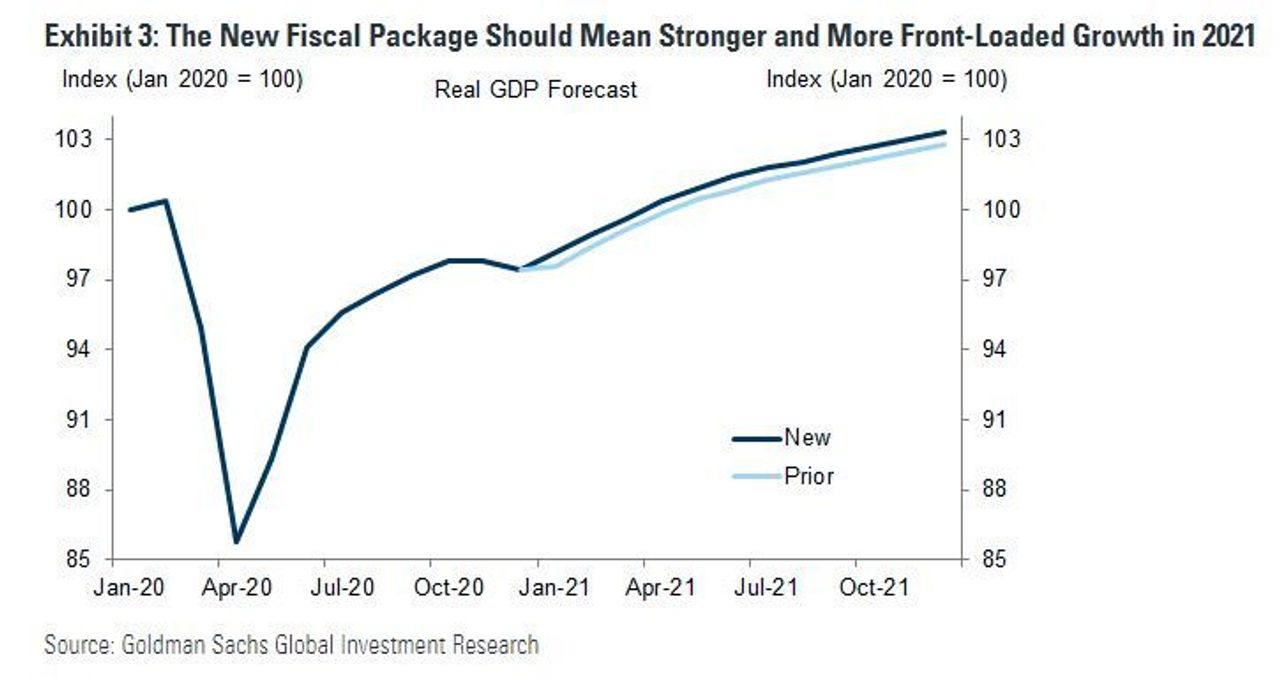 They expect a big bump in first-quarter disposable income: 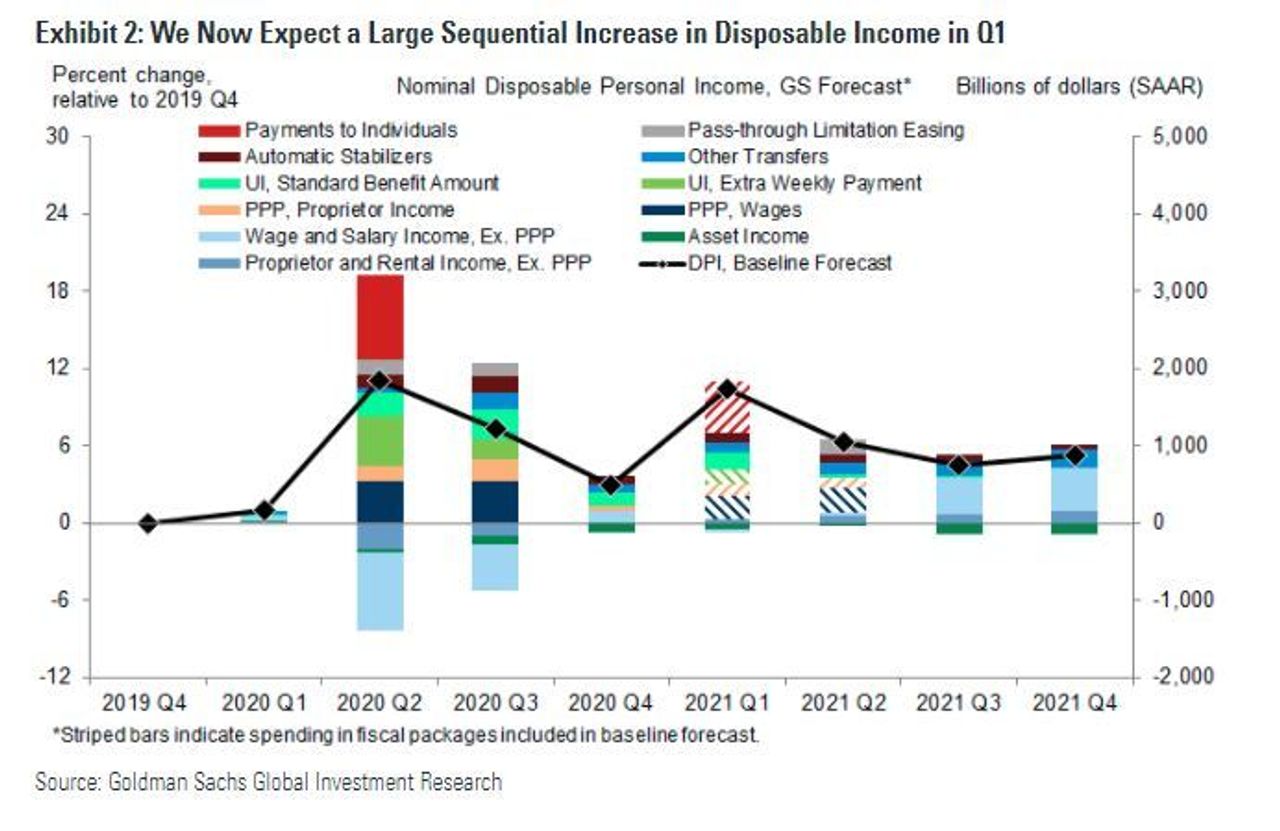 AP: Fauci: US taking hard look at variant of coronavirus