Need to Know: Brace for a volatile 2022, but cling to this tech stalwart when the storm comes, says investment advisor

15
SHARES
110
VIEWS
Share on FacebookShare on Twitter
Need to Know: Brace for a volatile 2022, but cling to this tech stalwart when the storm comes, says investment advisor

Brace for a volatile 2022, but cling to this tech stalwart when the storm comes, says investment advisor 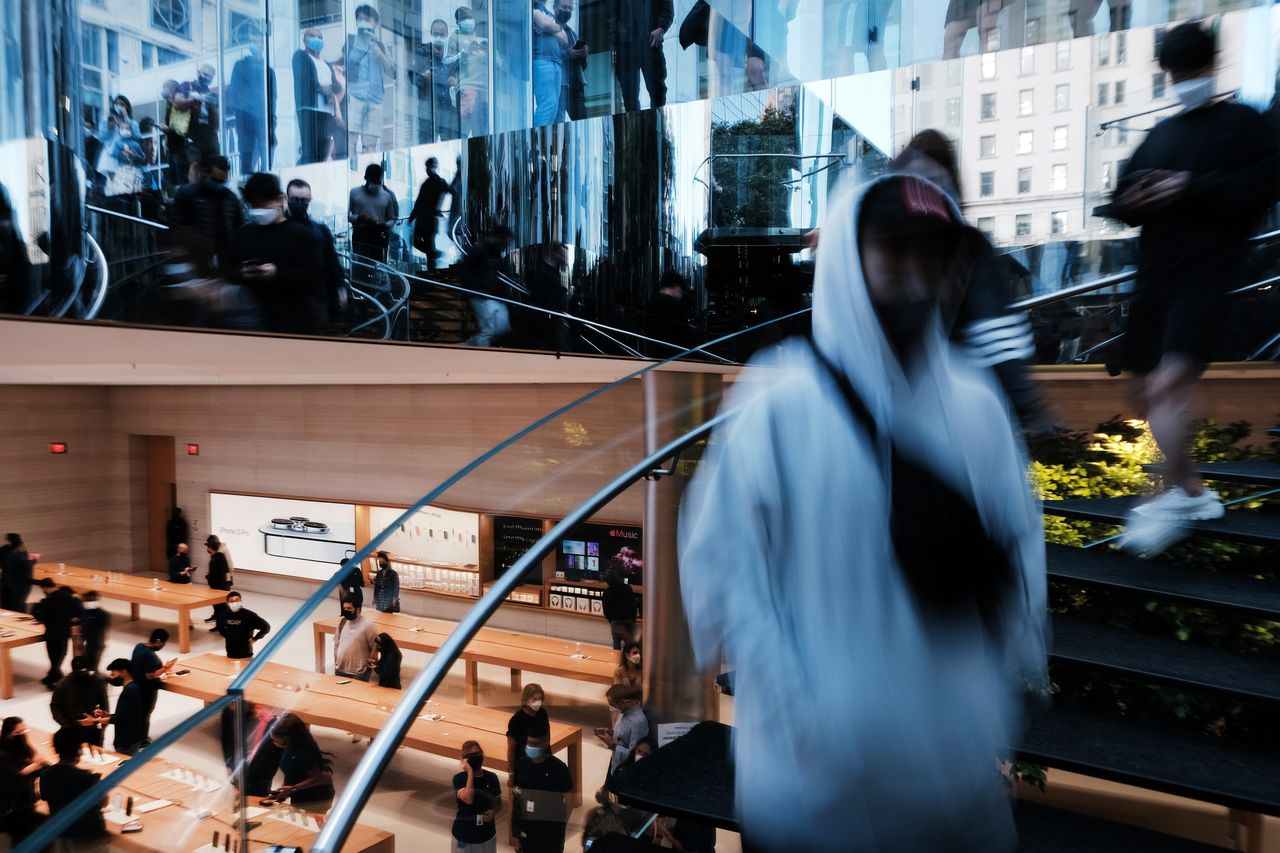 The pain is piling up for equity investors after the long U.S. holiday weekend, with bond yields at levels not seen since early 2020, and oil prices tapping 2014 highs.

The pace of Federal Reserve monetary policy tightening amid the highest inflation in about 40 years, a bumpy start to the corporate earnings reporting season and pandemic uncertainties are just a few things on the worry list. Technology stocks (COMP) are set to take the biggest hit on Tuesday, as a rapid rise in short term interest rates tends to make their future cash flows less valuable.

While a Deutsche Bank chart (below) reveals more tech-bubble worries, our call of the day makes a case for one of the biggest tech stalwarts, Apple (AAPL), saying the iPhone maker has an ace in its hole that few are paying attention to.

That call comes from investment adviser Wedgewood Partners, who kick off their fourth-quarter 2021 client letter with a warning about market volatility for 2022, triggered by central bankers who are about to usher in some market chaos by pulling the plug on years of cheap money. Even Chinese President Xi Jinping was heard warning the Fed not to hike interest rates at a virtual Davos on Tuesday.

However, the adviser also sees opportunities ahead as selling picks up speed, and they plan to stick to Apple, which they’ve owned for 16 years.

While Wedgewood said it couldn’t foresee the many products the company unveiled, “we did know that Apple’s vertically integrated [software and hardware] product development strategy was unique and extremely capable of creating products and experiences that customers thought worthwhile enough to spend growing amounts of time and money on,” said the adviser.

Today, that strategy remains intact, but more important Apple is commanding a key new realm, having developed over a dozen custom processors and integrated circuits, since launching its “A-series” processors. For example, one it produced in 2017 provided the iPhone X with enough power to operate FaceID 3-D algorithms, used to unlock phones and make digital payments.

“Apple has effectively created a semiconductor business that rivals and even surpasses some of the most established semiconductor-focused businesses in the industry,” said Wedgewood. “Apple continues to differentiate through vertical integration, which has been a hallmark of Apple’s long-term strategy to grow and capture superior profitability. It is difficult to predict what new products will be unveiled; however, we think this strategy should continue to serveshareholders quite well.” 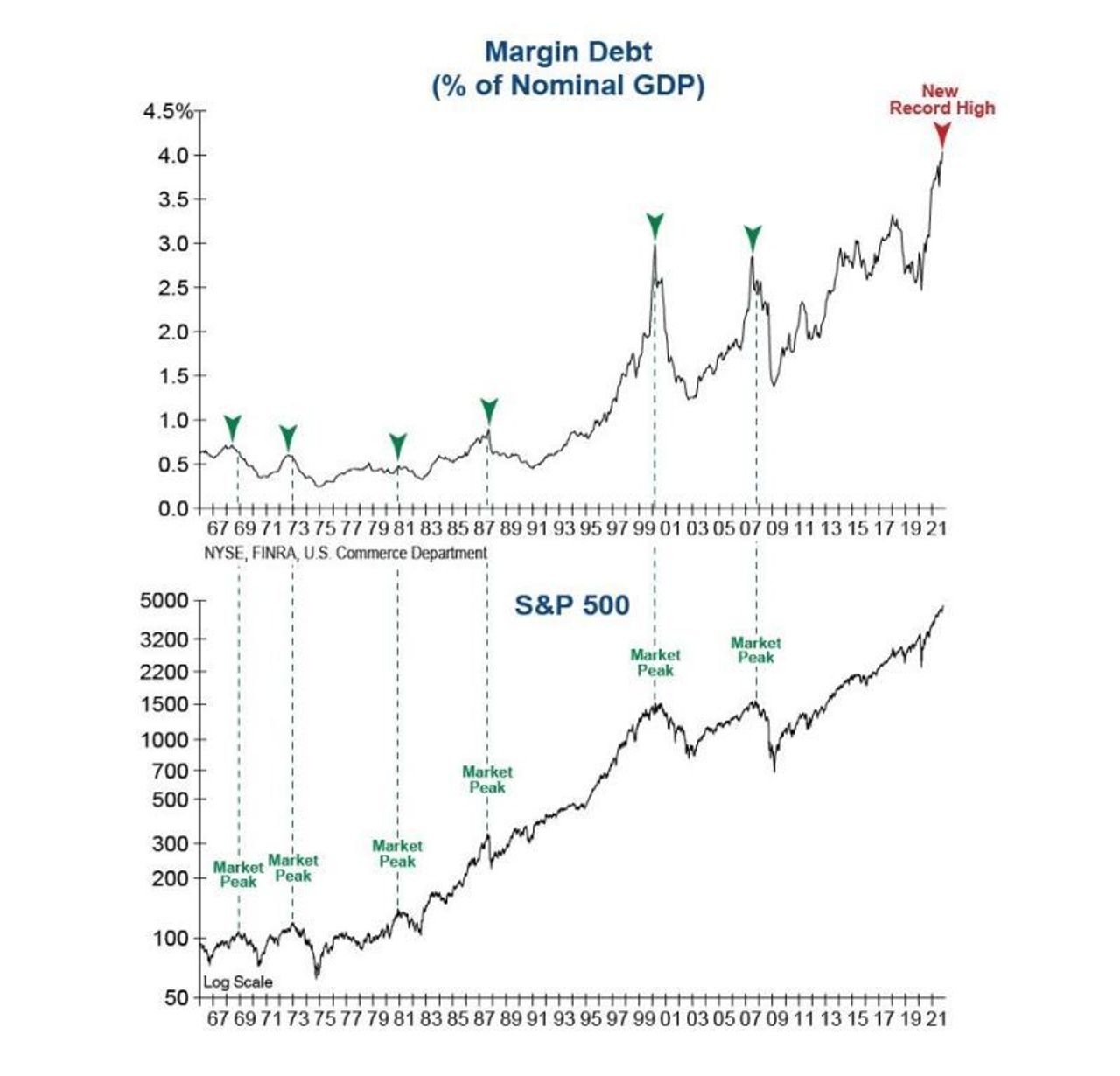 “Long term investors should root for such downside. Such times are opportunities to improve portfolios. Our pencils are sharpened for opportunities as Mr. Market serves them up.”

Meanwhile, after a disappointing batch of bank results last week, we’ll hear from Goldman Sachs (GS) and Charles Schwab (SCHW) ahead, along with Kinder Morgan (KMI) and Alcoa (AA).

Another study says COVID infections are turning children into fussy eaters due to parosmia disorders that distort their sense of smell. And China state media says packages from the U.S. and Canada had helped spread omicron.

An airline lobby group is warning of “chaos” for U.S. air travelers due to 5G services rolling out this month, in a letter signed by big carriers, UPS (UPS) and FedEx (FDX).

The New York Empire state manufacturing index for January is due ahead of the market open Tuesday, followed by a National Association of Home Builders index for the same month.

Retailer Walmart (WMT) is looking at creating its own cryptocurrency and nonfungible tokens, according to U.S. patent filings. 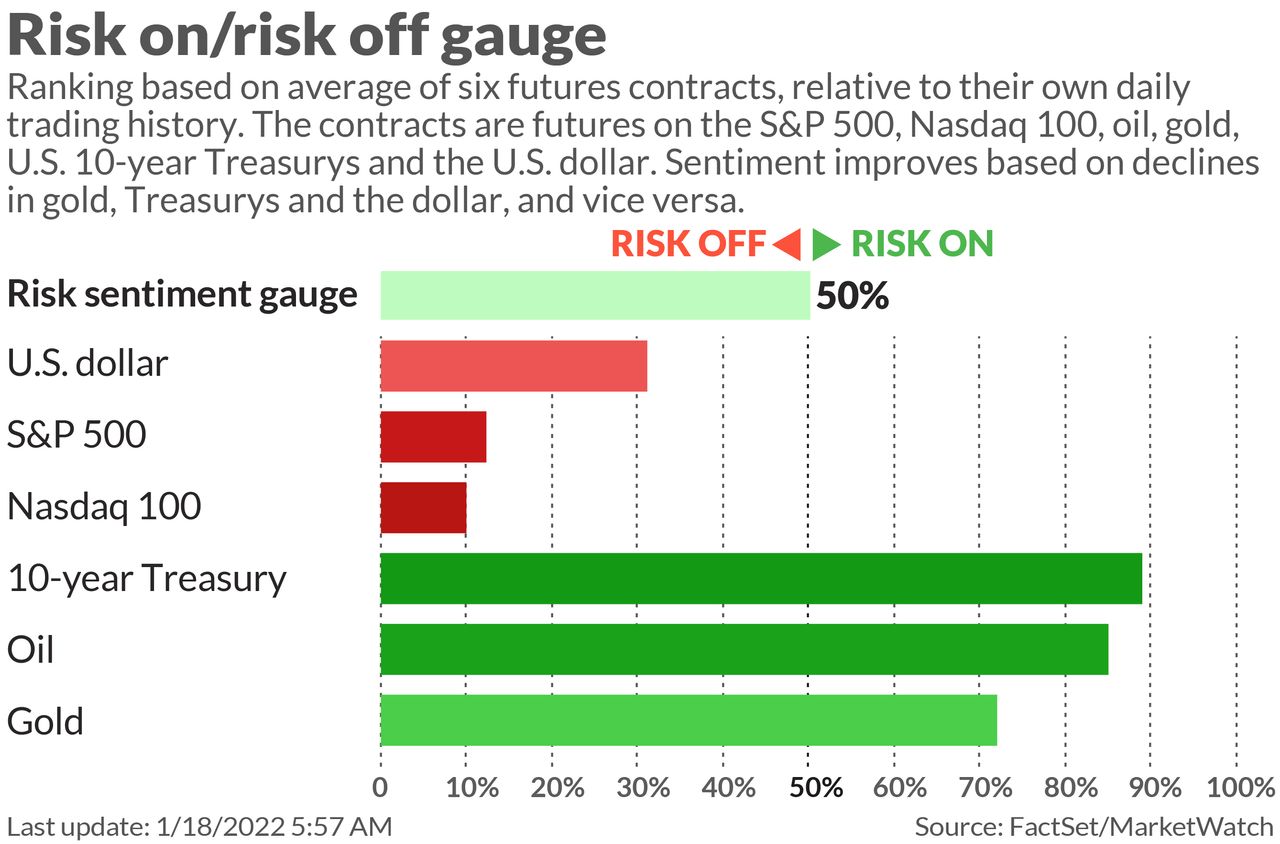 U.S. stock futures (ES00)(YM00) are under pressure Tuesday led by those for the Nasdaq-100 (NQ00) as bond yields (BX:TMUBMUSD10Y)(BX:TMUBMUSD02Y)surge across the curve. Oil prices (BRN00)(CL00) are surging after Iran-backed Houthi rebels launched a deadly drone attack on a key oil facility in Abu Dhabi. Goldman Sachs also predicted Brent could top $100 a barrel in 2023.

A January survey of more than 500 investors polled by Deutsche Bank shows a slightly gloomier mood. For example, they are more bearish: 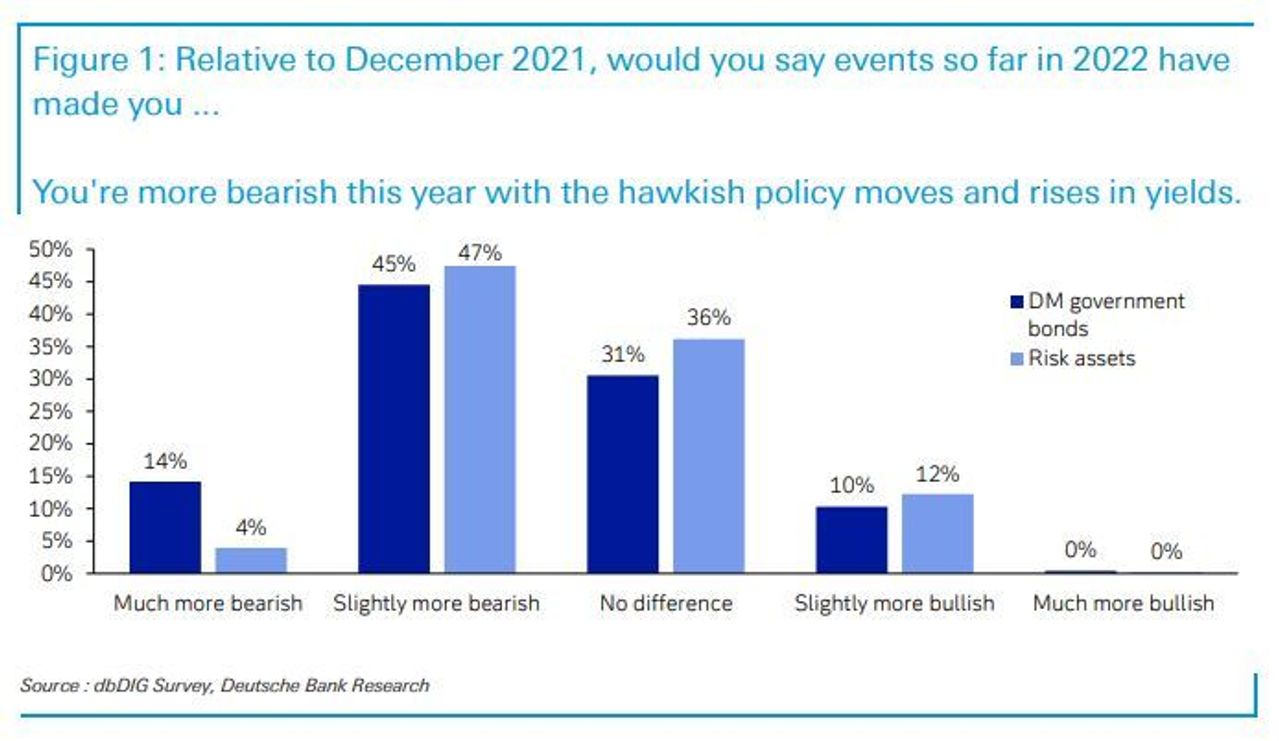 Many, especially those over 34, think tech shares are in a bubble: 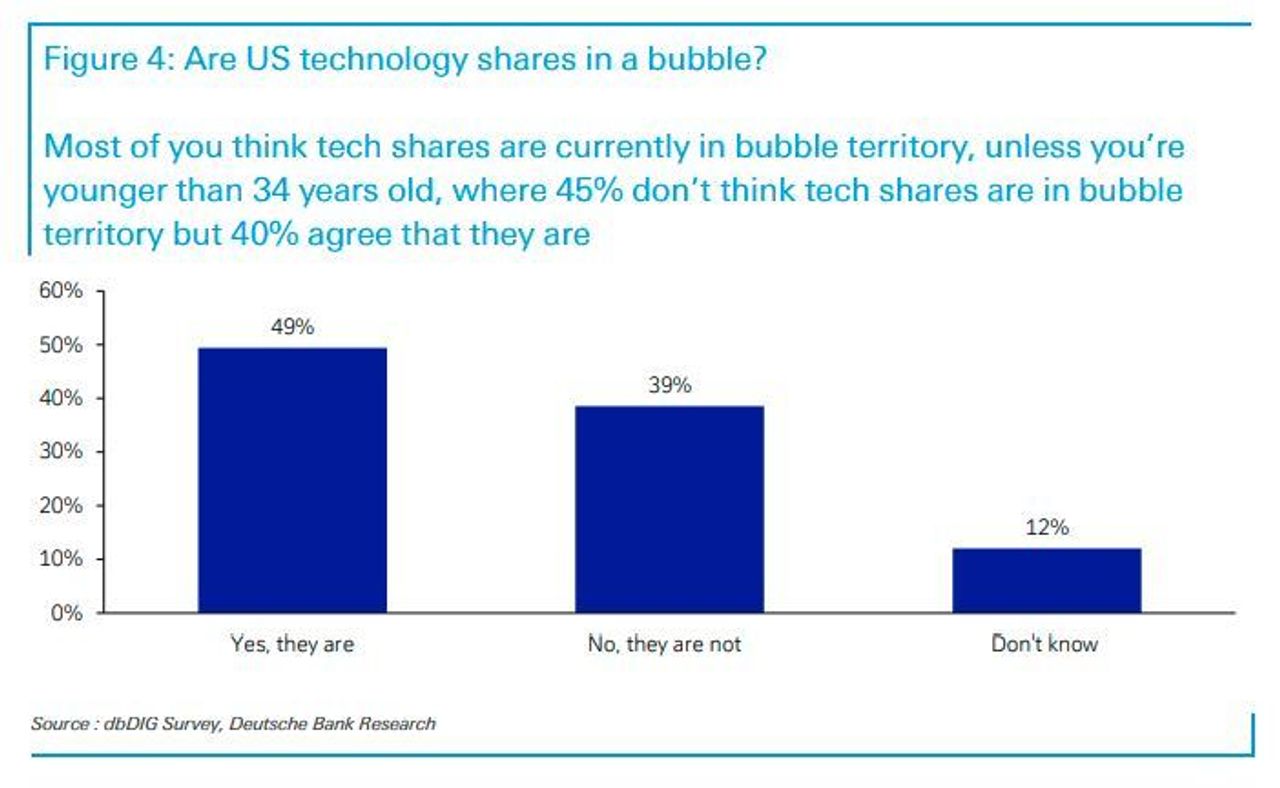 And they continue to see inflation as the biggest risk to markets, but are also fretting a more aggressive Fed: 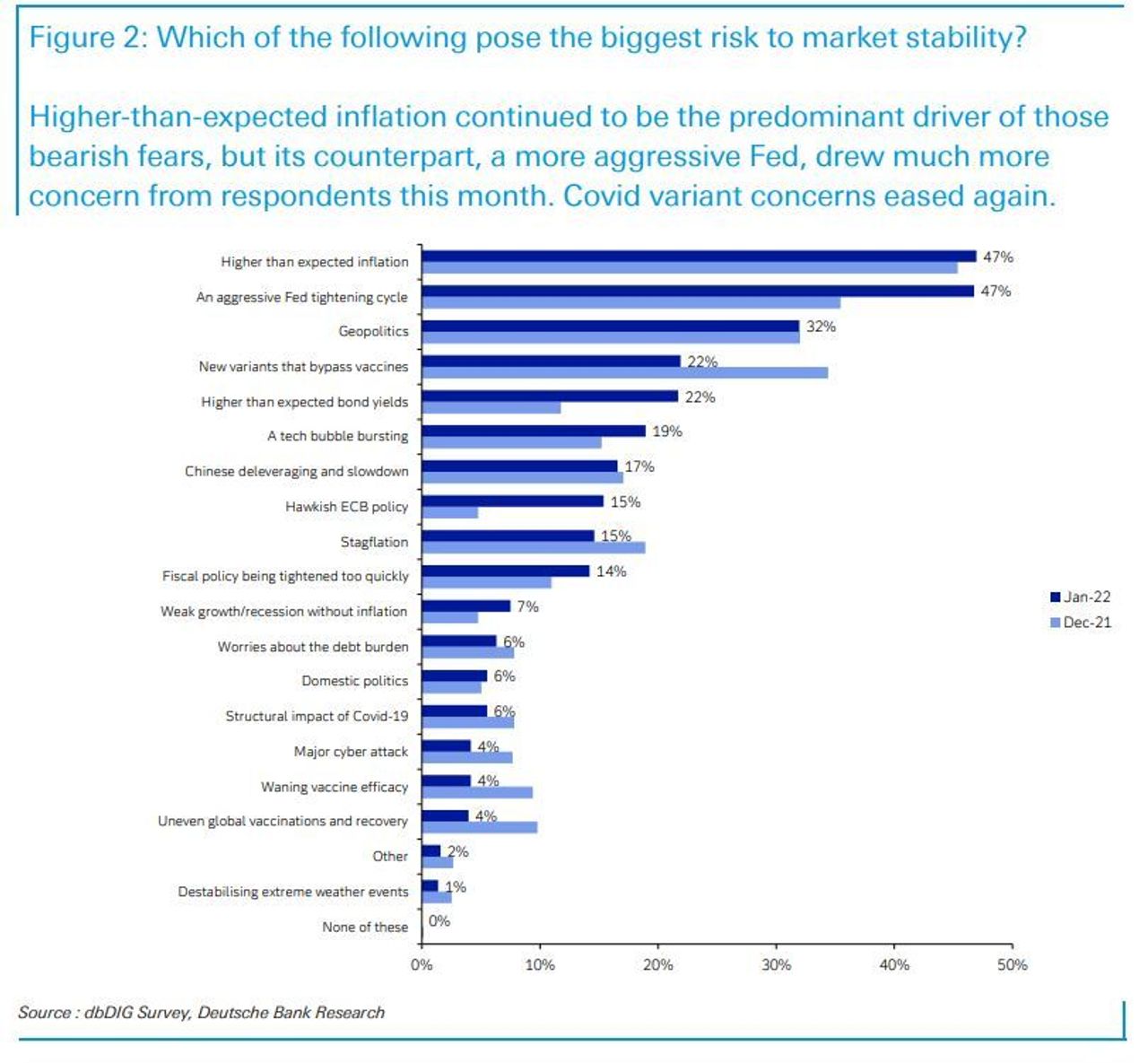 Here are the top stock tickers on MarketWatch as of 6 a.m. Eastern Time.

Tulsa pastor apologizes for wiping his saliva on a man’s face during a sermon.

The high environmental cost of your beloved fish-oil pills.