Need to Know: Fearless retail traders could help save the stock market in 2022

13
SHARES
94
VIEWS
Share on FacebookShare on Twitter
Need to Know: Fearless retail traders could help save the stock market in 2022

Fearless retail traders could help save the stock market in 2022 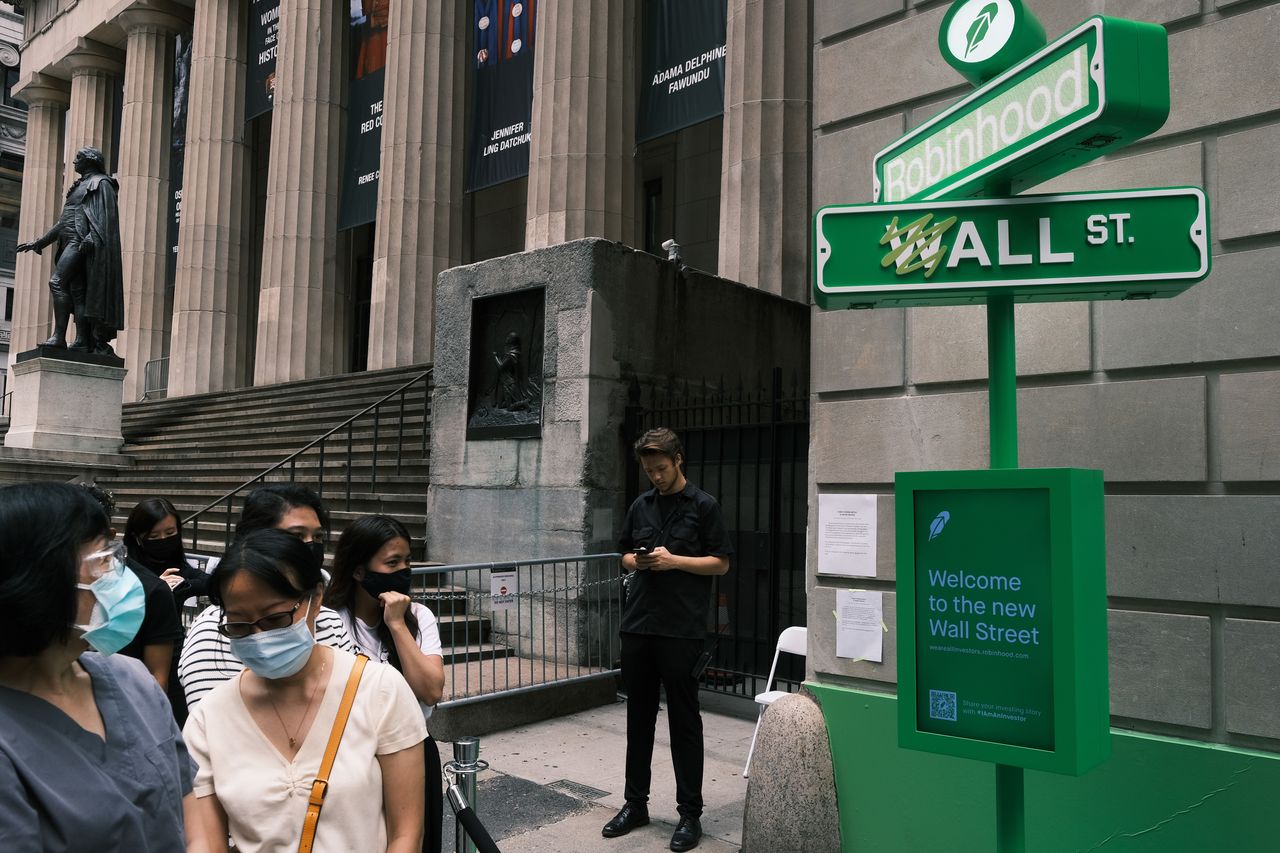 Investors look ready to hit the sidelines for Thursday, ahead of producer prices, which come a day after some nosebleed consumer-inflation data. We are also one day out from the start of fourth-quarter earnings, to be kicked off by big banks.

“U.S. equities are now firmly in a trading range, and we believe it will require significant surprises on earnings (either way) or a breakout in the U.S. 10-year yield to take U.S. equities out of the trading range,” Peter Garnry, head of equity strategy at Saxo Bank, told clients in a note.

Inflation updates are driving plenty of discussion about when the Federal Reserve rate hikes will come, with March looking like a shoo-in for the first one. This chart from ClearBridge Investments shows that equities often rise headed into that first hike, and settle into gains eventually afterward.

“After a period of choppiness following liftoff, the market has historically found its footing,” said Jeff Schulze, investment strategist at ClearBridge Investments, in a webcast to clients on Wednesday with Franklin Templeton Investments. Here’s another chart from that presentation, showing stock returns rising over time as rates rise: 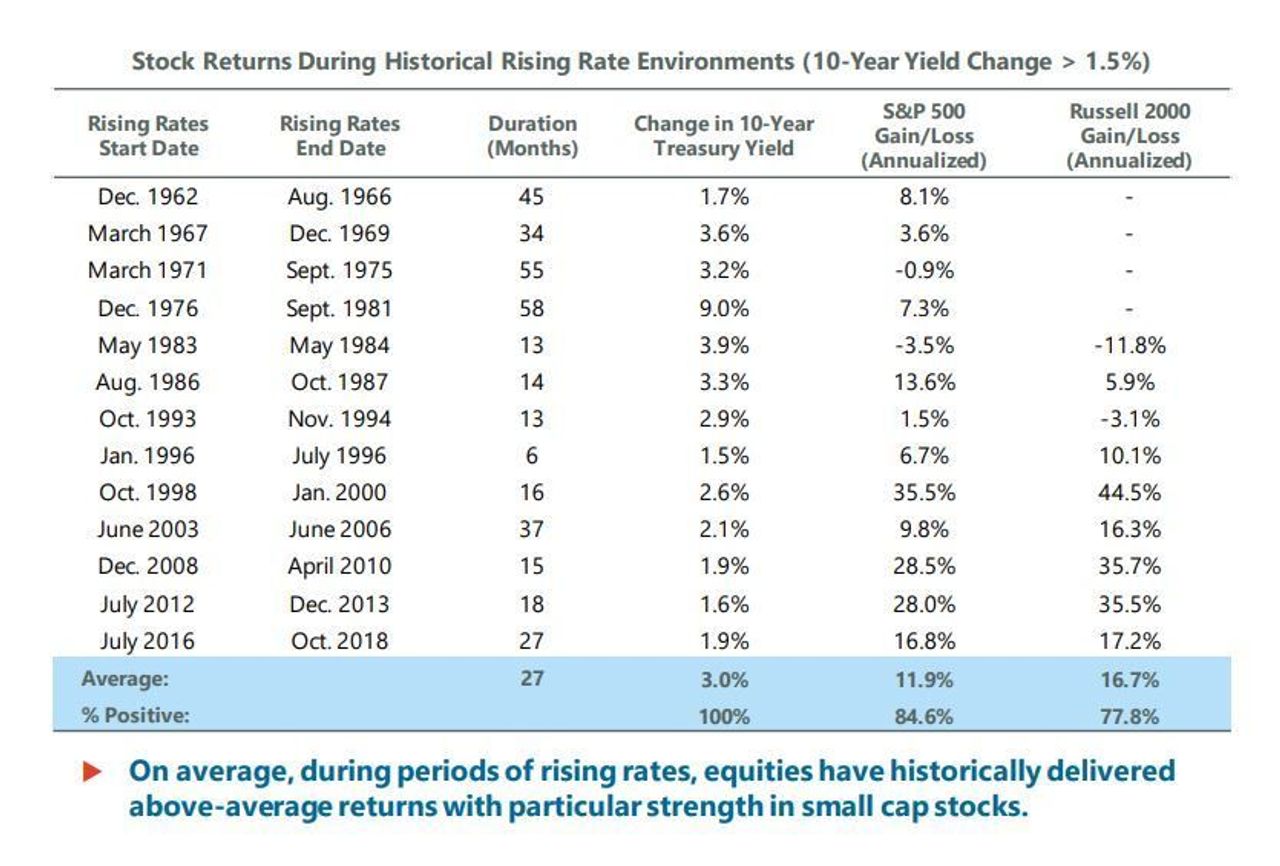 Our call of the day from the ClearBridge/Franklin Templeton team says retail traders may once again provide a support for stocks this year. In short, the “retail will replace the Fed put.”

As Schulze explained, investors have been emboldened in the past by expectations the Fed is always there to support equities in times of trouble. With central banks shifting to tapering and tightening in 2022, the theory is that retail traders could be ready to buy any dips.

In 2021, as their chart shows, investors poured more money into global equities than in the previous 25 years combined. That was predicted by Deutsche Bank and others in early 2021 who saw a “fearless” flock of new investors driving money into stocks.

“With retail investors stepping in to buy the dips, the market did not experience a significant drawdown in 2021. January typically experiences the largest inflows of any month, suggesting the retail put remains in place as we enter 2022,” said Schulze in the presentation.

Providing more support to this theory is a new survey from Investing.com showing that 86% of last year’s first-time stock buyers plan to keep buying in 2022. The survey of 1,600 U.S. respondents also showed they are more likely to take risks, with 58% including cryptocurrencies in portfolios, and also more interest in buying meme stocks.

Schulze said while it isn’t totally clear if those retail investors will show up this year, he believes the drumbeat around “TINA” — there is no alternative (to stocks) — may help. 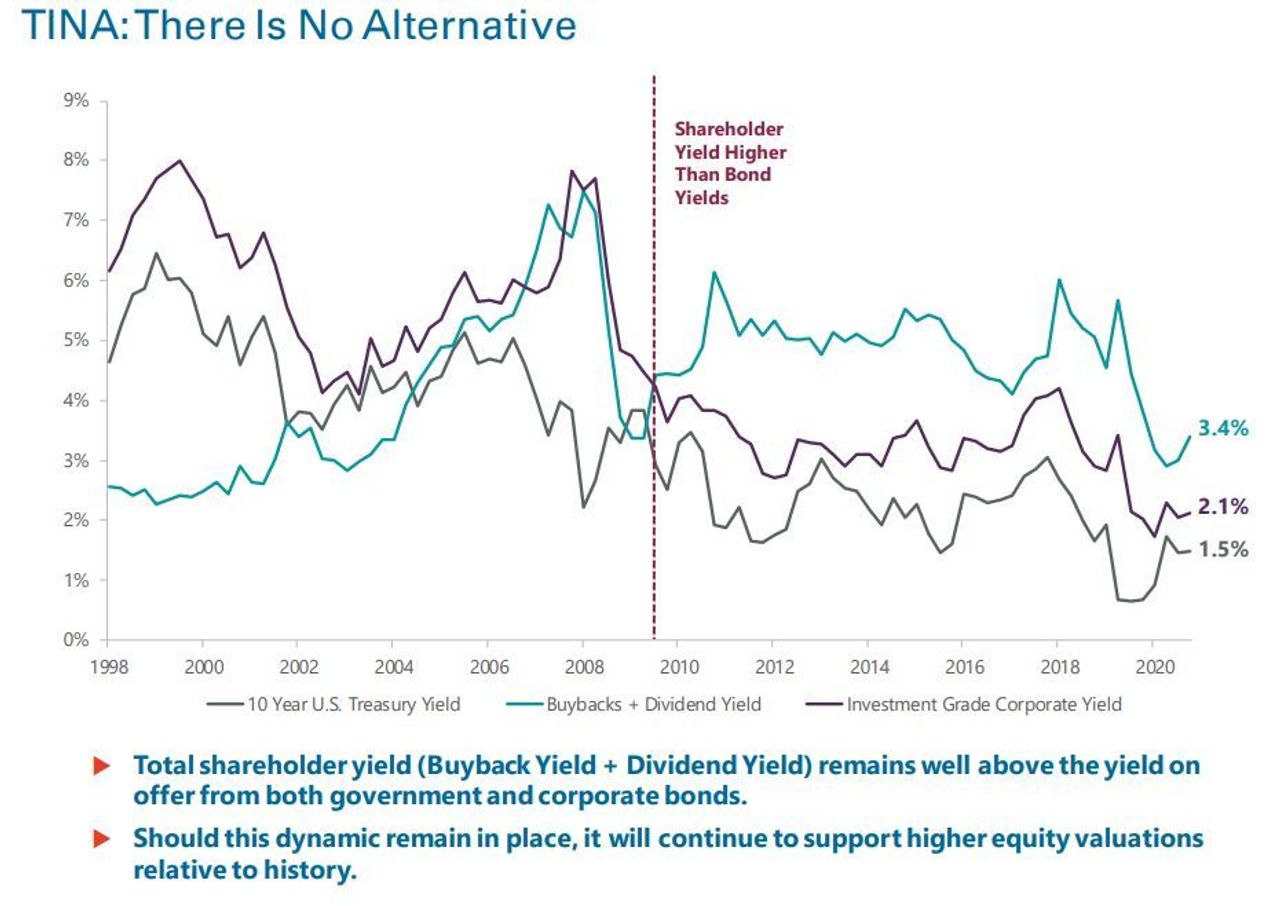 At 8:30 a.m. Eastern, we’ll get December producer prices that are expected to show a 0.4% monthly rise, with weekly jobless claims due at the same time.

Fed. Gov. Lael Brainard will testify at 10 a.m. Eastern at her Senate nomination hearing as the next vice chair of the central bank. In prepared remarks released Tuesday, she said inflation was “too high” and the Fed needs to focus on getting it back down to 2%.

Coinbase shares (COIN) are climbing, after the crypto exchange announced plans to buy derivatives exchange FairX. And here’s a guide to answering the cryptocurrency question that will show up on your tax forms this year.

A lab study showed cannabis compounds stopped infections from the virus causing COVID-19 by blocking its path to cells.

Taiwan Semiconductor (TSM)(TW:2330) reported record profit and revenue thanks to surging demand for its chips.

Valued at $9 billion, private-equity firm TPG Partners will make its public debut on Thursday, with shares set to start trading at $29.50. 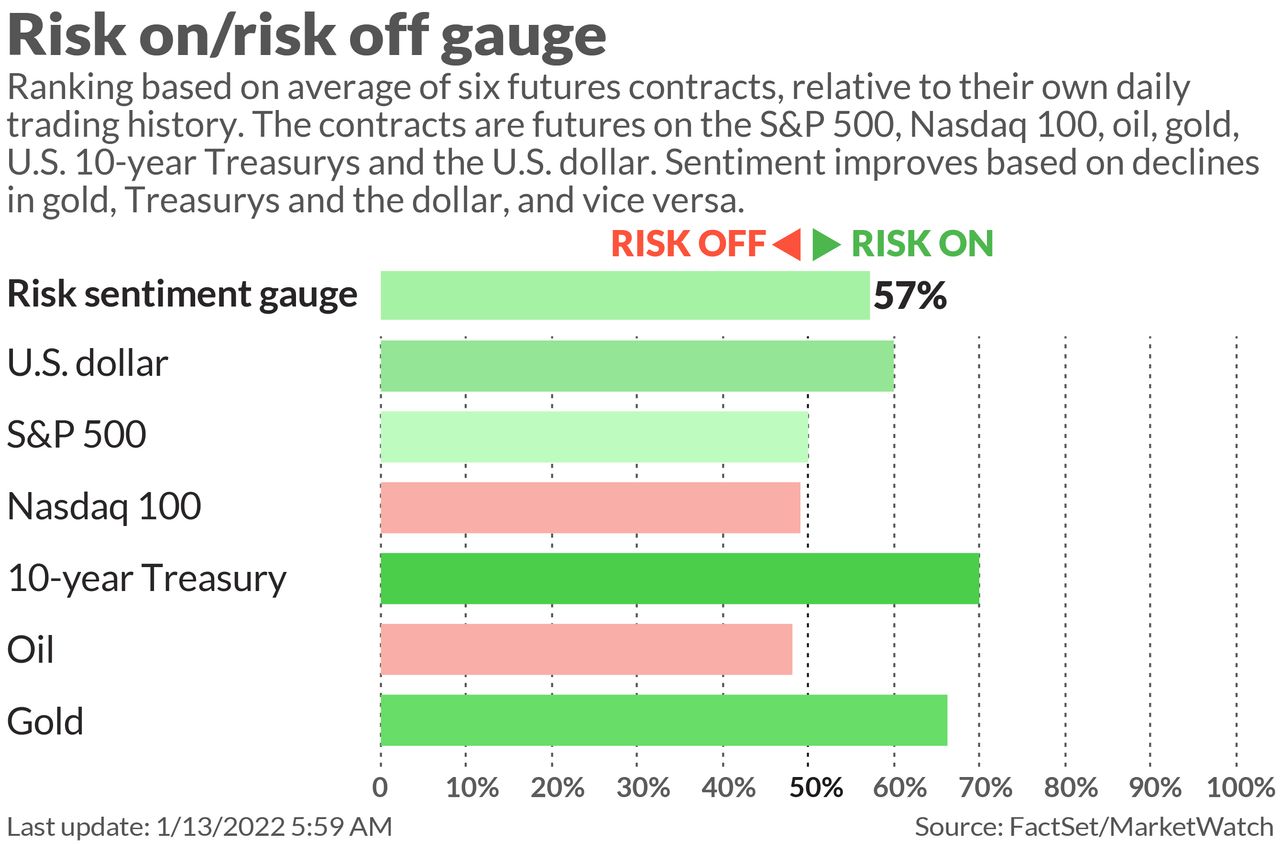 Stock futures (ES00)(YM00)(NQ00) are holding steady as bond
yields (BX:TMUBMUSD10Y) creep up in the wake of four-decade high consumer prices. The dollar (DXY)continues to drift lower, and oil prices (CL00) are also under pressure.

These are the most active tickers on MarketWatch as of 6 a.m. Eastern.

Fans mourning ’60s icon Ronnie Spector, who died after a short battle with cancer at 78.

Let’s get things started. The Academy of Motion Picture Arts and Sciences asked who should host this year’s Oscars and Twitter responded: 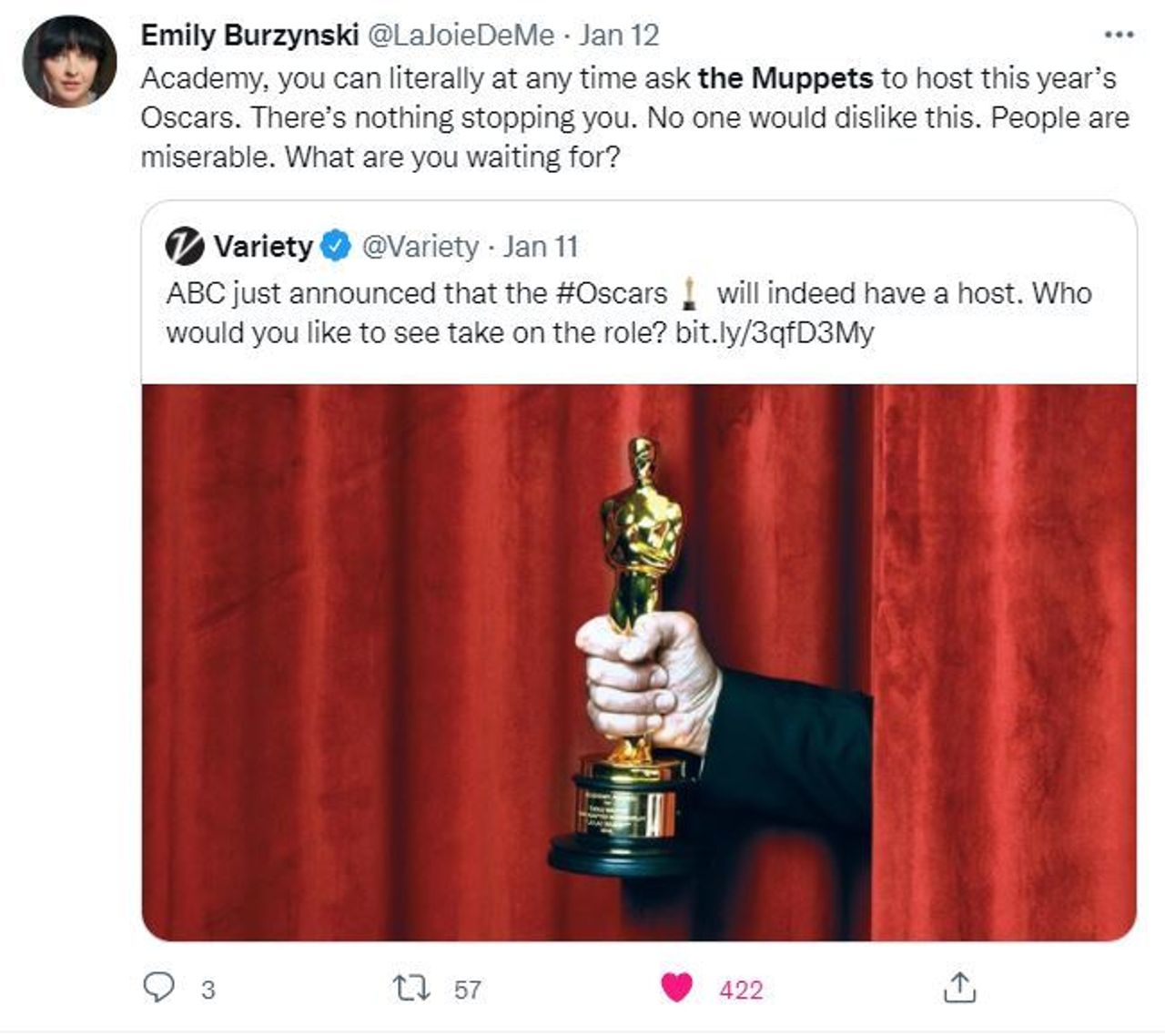 A Chinese woman has gotten stuck in lockdown with her blind date.

Market On Close: Small MOC but no signs the trades want out yet.