Need to Know: From tech to financials, here are dozens of inflation-sensitive stocks that crush it when prices are rising, from Credit Suisse.

15
SHARES
109
VIEWS
Share on FacebookShare on Twitter
Need to Know: From tech to financials, here are dozens of inflation-sensitive stocks that crush it when prices are rising, from Credit Suisse.

From tech to financials, here are dozens of inflation-sensitive stocks that crush it when prices are rising, from Credit Suisse. 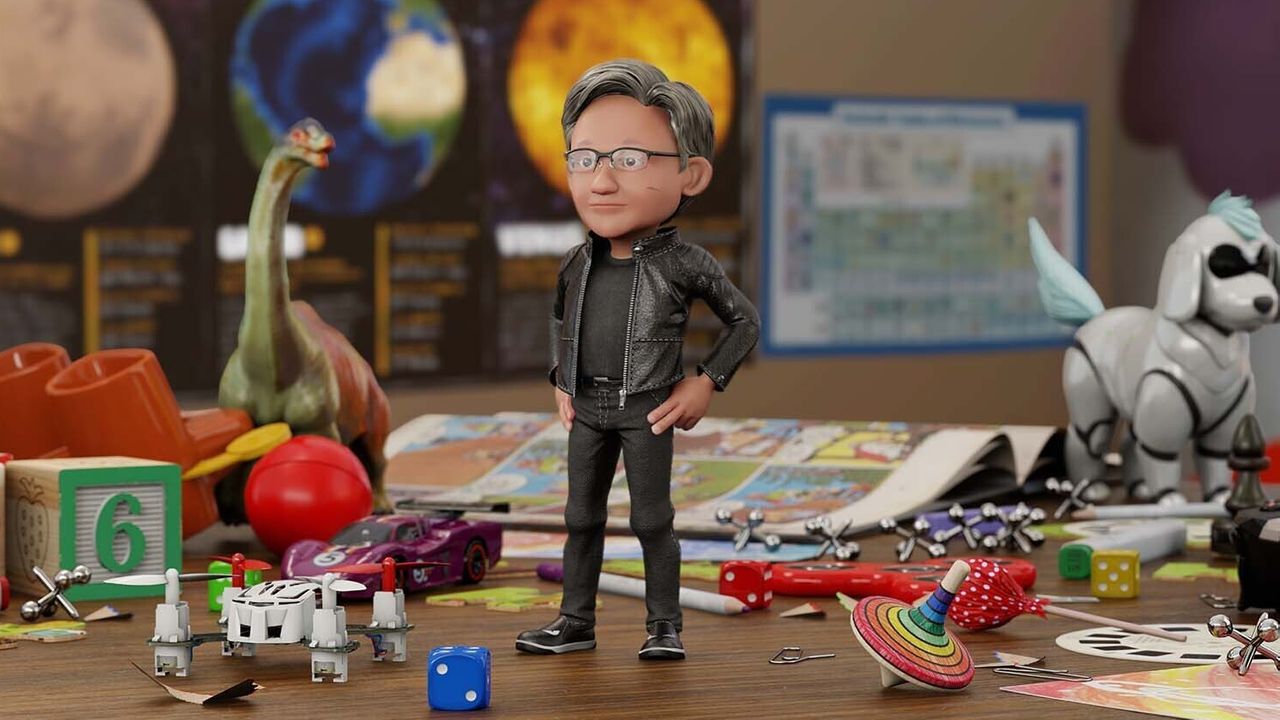 China’s interest-rate cuts and some easing of the bond selloff seem to have cheered up investors — at least for now — who have been hitting the sell button over Federal Reserve rate-hike fears.

A day after Chinese President Xi Jinping warned of fallout from Fed tightening, the country’s central bank has cut benchmark lending rates for a second month. Stock futures are up following another Wall Street selloff that saw the Nasdaq’s (COMP)descend into correction territory.

How much inflation fear is merited for equity investors? Keep it in check, says our call of the day from Credit Suisse strategists, who note that since the COVID-19 pandemic’s onset, “the most inflation-sensitive stocks have substantially outperformed,” and often traded at a big discount. 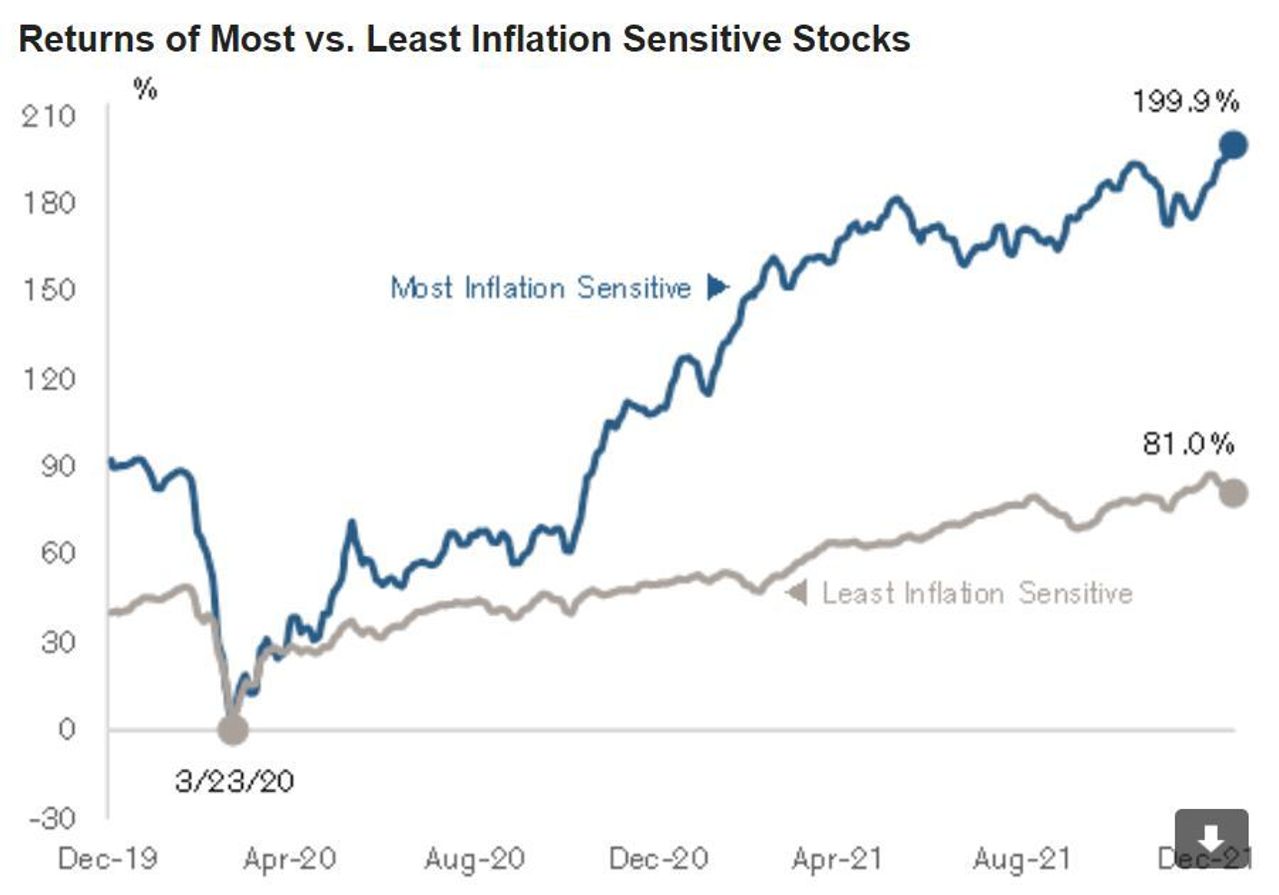 Jonathan Golub, chief U.S. equity strategist, and Patrick Palfrey, senior equity strategist, told clients that they expect inflation will move higher and stay there longer, due to several factors, including a strong economy and higher commodity and home prices. 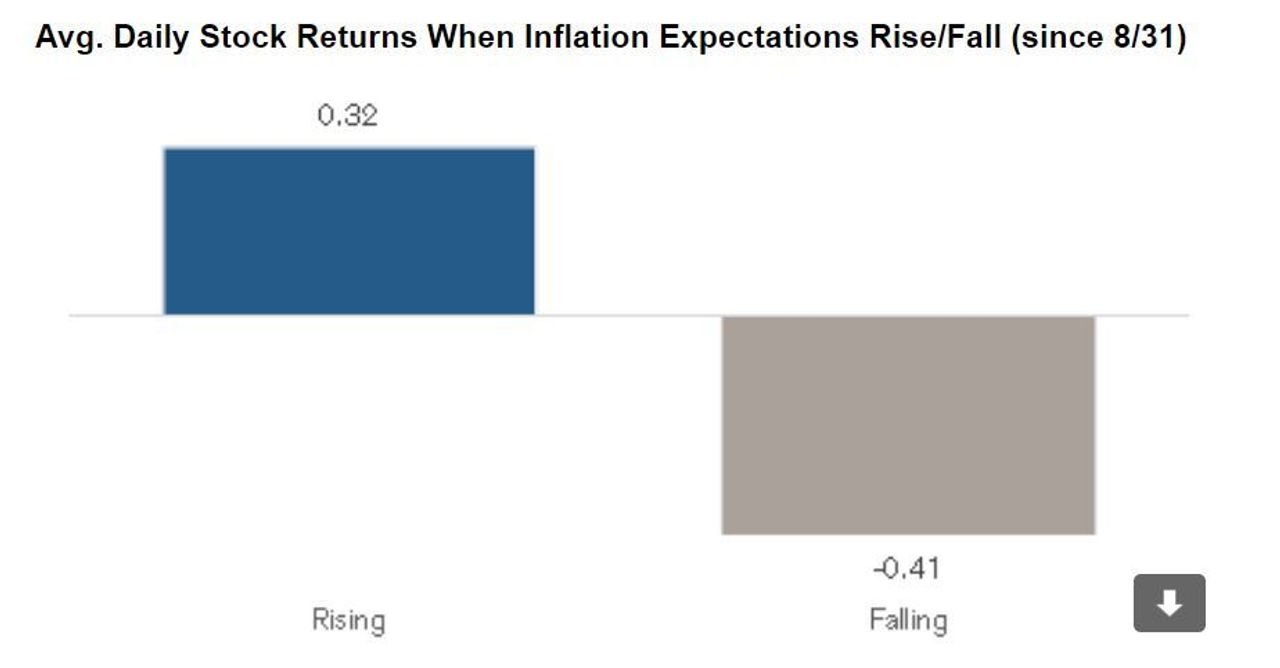 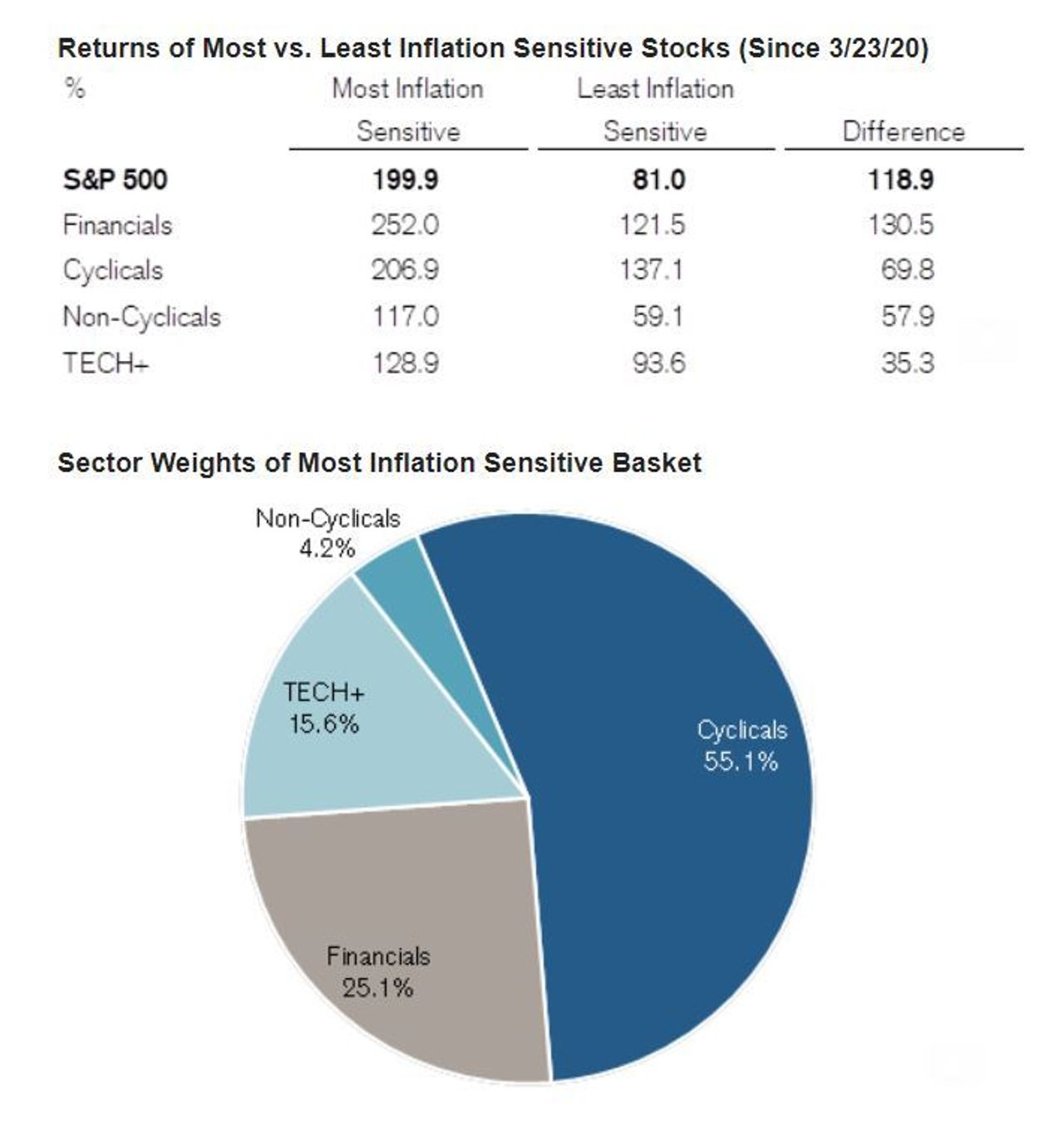 Golub and the team have come up with exhaustive lists of companies that are most sensitive to inflation. Here’s a rundown of tech names, including Apple (AAPL) and Microsoft (MSFT) — least sensitive — and Nvidia (NVDA), Western Digital (WDC) and Micron Tech (MU) — most sensitive. 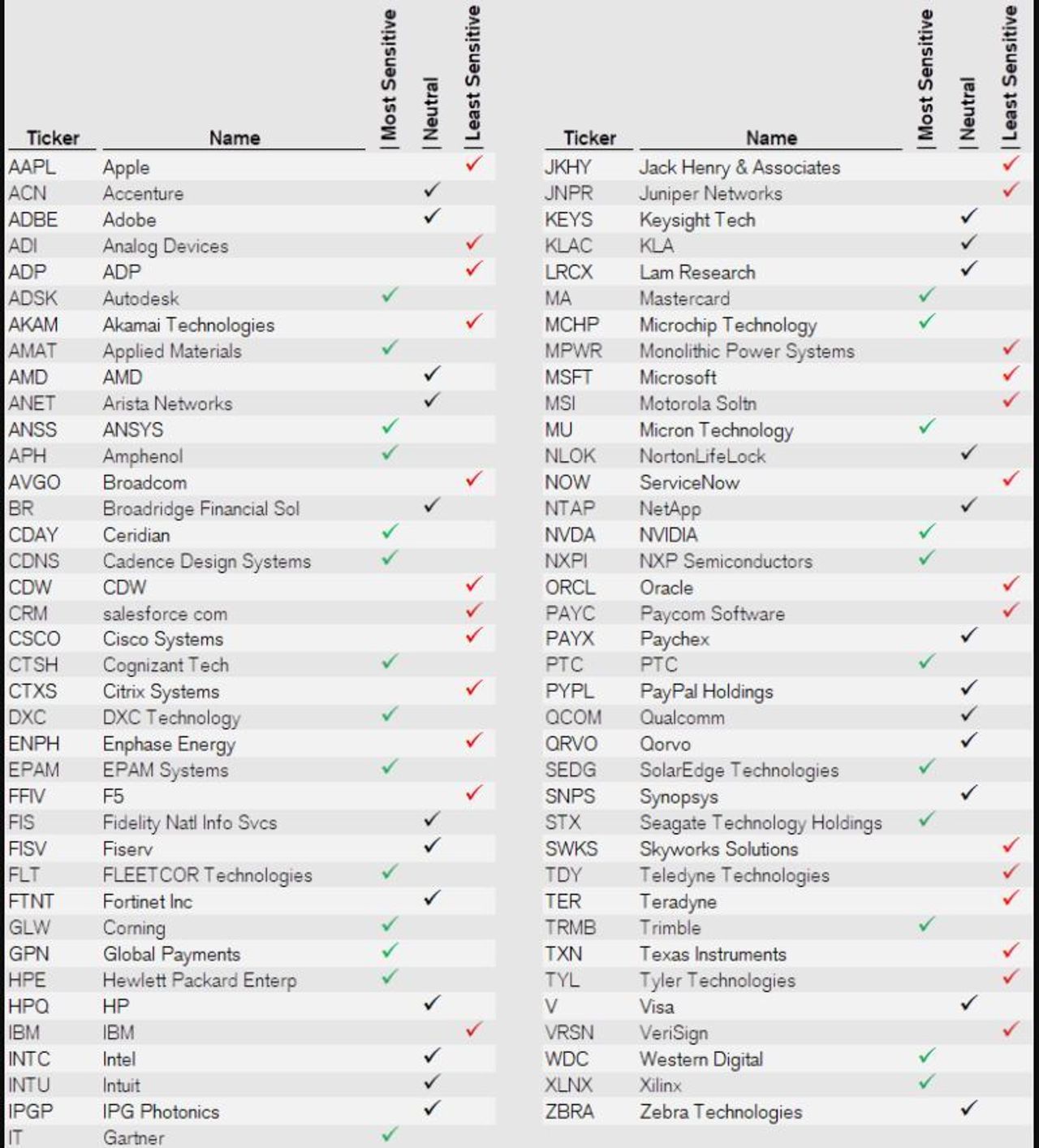 Across other sectors, they highlight other highly inflation-sensitive stocks. For example, in energy, that includes Marathon Oil (MRO), Schlumberger (SLB) and Hess (HES) in the energy sector, with DuPont (DD), Dow (DOW), Eastman Chemical (EMN), Freeport-McMoRan (FCX) and Mosaic (MOS) in materials.

Read:
At least 7 signs show how the stock market is breaking down

HSBC has cut its overweight rating on U.S. stocks, partly on rising rate expectations, saying China may be one place to hide.

Casper Sleep (CSPR) stock is up 11% after the mattress and sleep accessories group said shareholders have approved a buyout.

Travelers Cos. (TRV) is surging on a profit beat, Signet Jewelers (SIG) on higher guidance, and Baker Hughes (BKR) is up modestly after results. American Airlines shares (AAL) are up on a revenue beat and lower losses, while United Airlines (UAL) is taking a hit from after a weaker capacity outlook for 2022, while Alcoa stock (AA) is rising after an earnings beat.

Netflix (NFLX) will report results after the market close, but how important is that subscriber-growth number?

Read:
Here’s what’s coming to Netflix in February 2022 — along with a price hike

Weekly jobless claims and a Philadelphia Fed manufacturing survey are due at 8:30 a.m. Eastern, followed by existing-home sales.

The end of President Joe Biden’s first year in office was marked by defeat, as Democrats failed to change Senate filibuster procedures to push through election legislation because two party members sided with Republicans.

And geopolitical worries are in focus, with eyes on Russian troops along the border of Ukraine.

Scientists are warning that antimicrobial resistance has become a leading cause of global deaths, killing 3,500 people daily and more than from malaria or HIV/AIDS.

In a bid to boost vaccination levels, Austria is kicking off a lottery for those who have the COVID-19 shots, offering handouts worth 500 euros ($568) for perks such as hotels and restaurants. 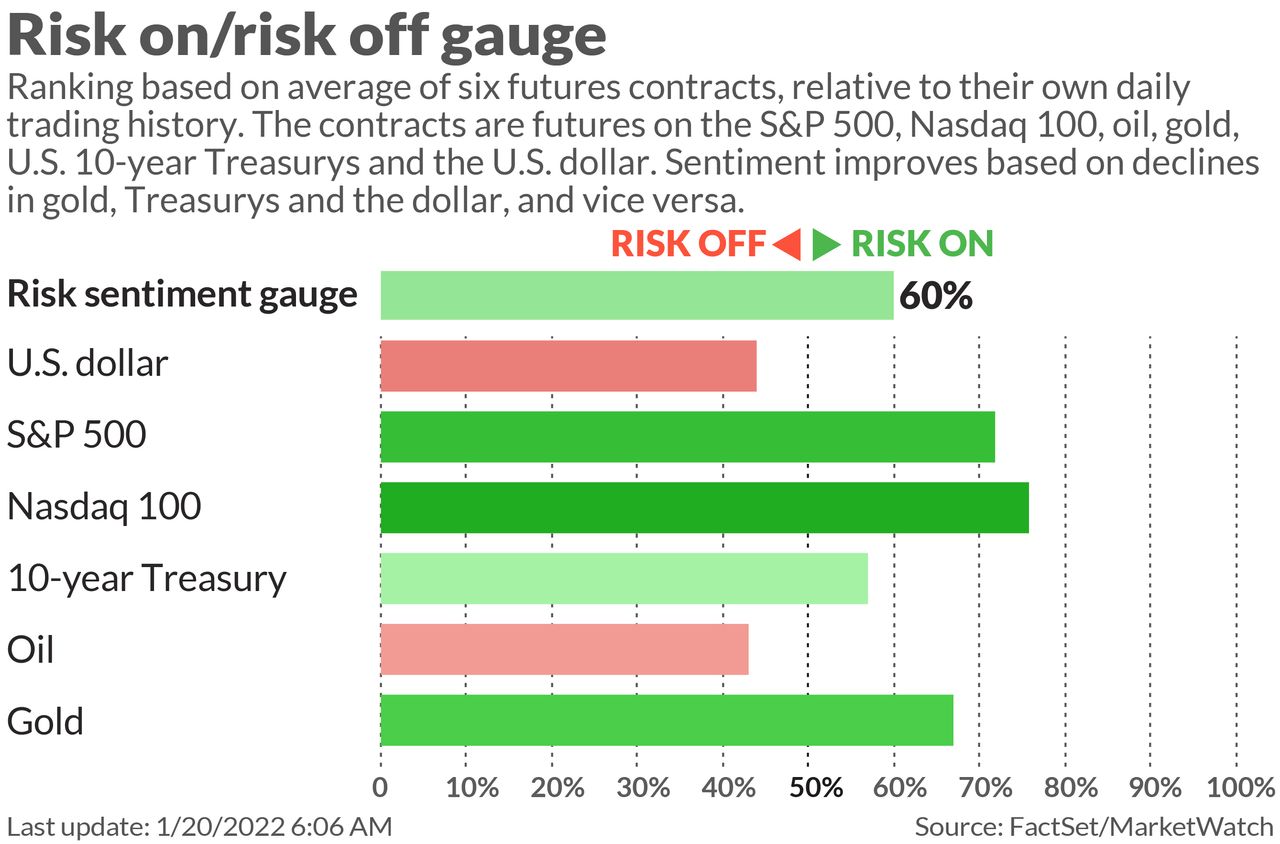 Read: Oil could break the stock market’s back if crude ‘goes parabolic’ — How to prepare

Commodities are off to a strong start this year, but it isn’t just about oil and metals, notes Chris Weston, Pepperstone’s head of research.

“We’ve seen some big moves in AG’s [agriculture] and soft commodities too and I have an eye on coffee and hogs — lean hogs could be starting something beautiful. I know this isn’t a market that comes onto everyone’s radar too often, but for trend-followers or momentum players, when this goes it can go and will often be traded by CTAs (systematic trend followers),” he told clients. 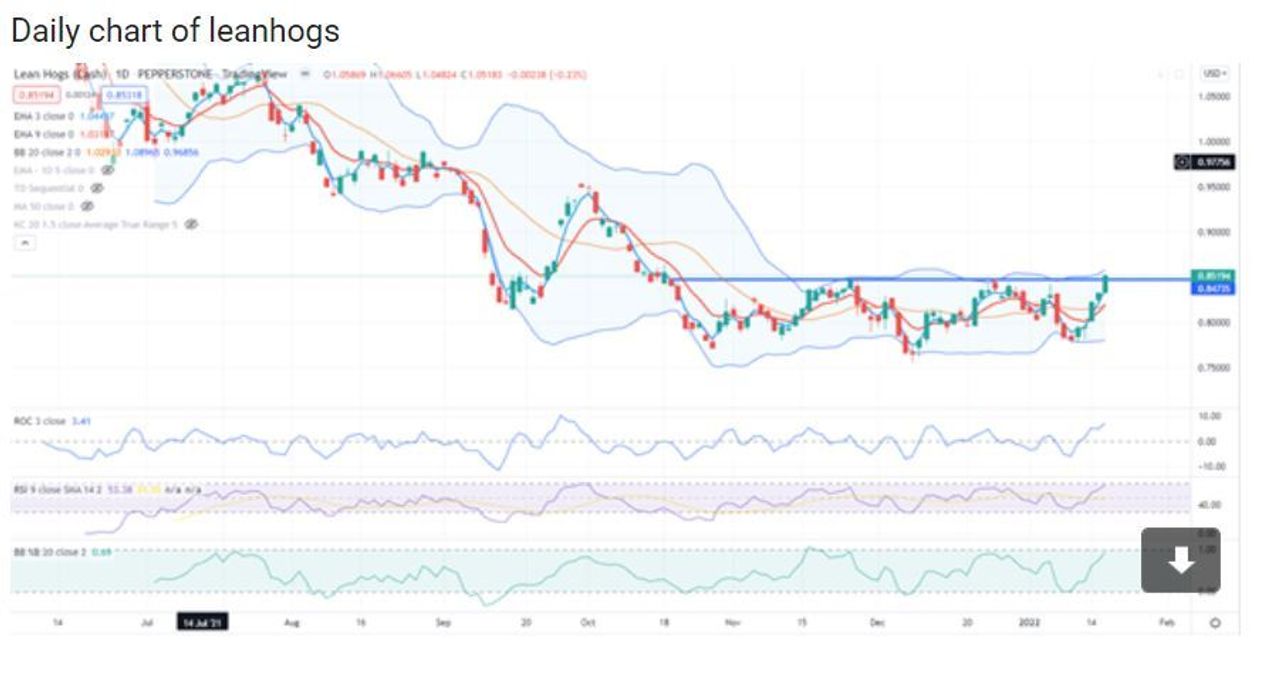 Here are the most active tickers on MarketWatch as of 6 a.m. Eastern.

A disabled Tongan man swept away during the island’s deadly tsunami, survives 24 hours in the ocean.

Insights from a man who read all 27,000 Marvel superhero comics.

The museum at the end of the world has finally reopened.