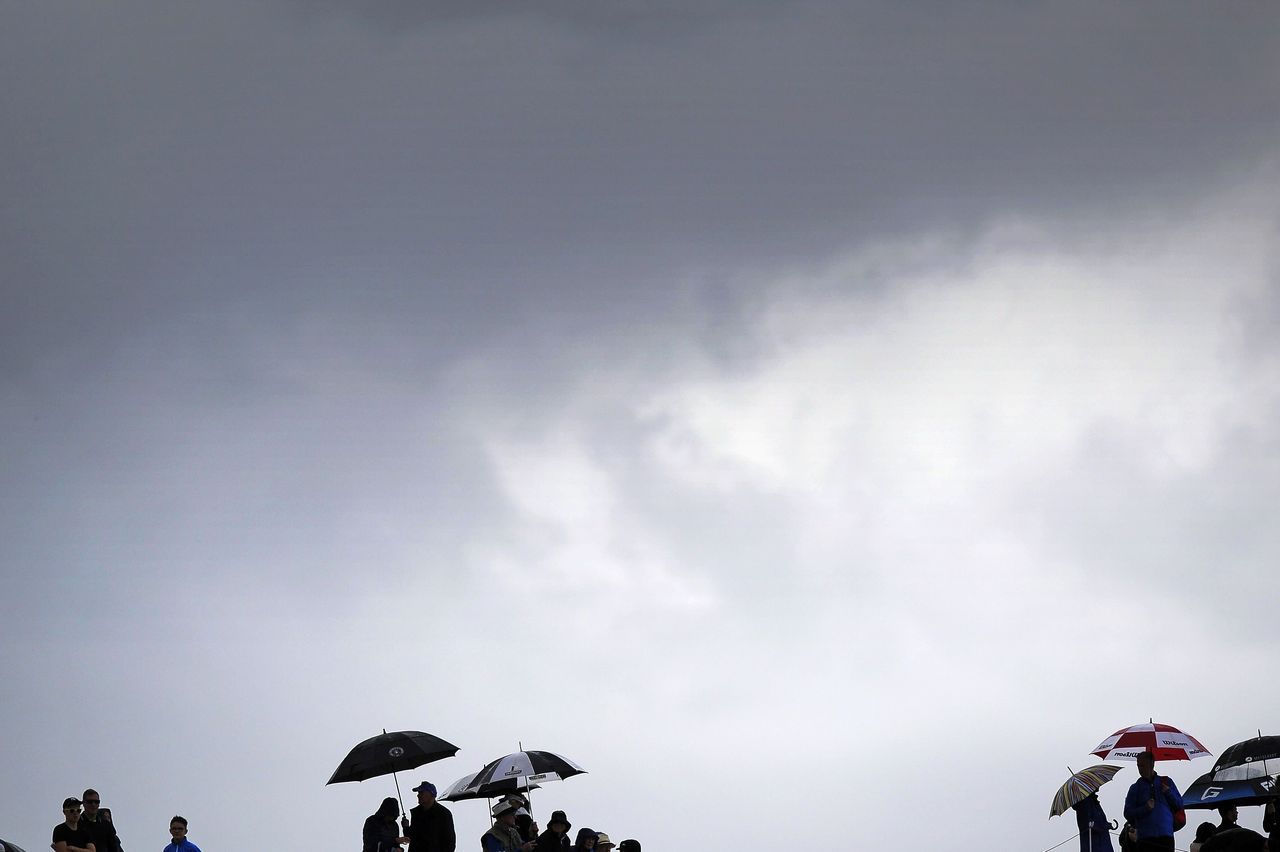 Welcome to turnaround Tuesday, though there’s little turn at play considering Monday was the fourth straight day of gains for both the S&P 500 (SPX) and Nasdaq Composite (COMP).

While Wall Street stocks continue to trek higher this quarter, the mood darkens among global fund managers. So says the latest monthly survey from Bank of America, which reports those managers have turned negative on global growth expectations for the first time since early COVID-19 pandemic days — April 2020.

The chief reasons are inflation worries and slowing China growth that have led to an exodus out of bonds and into cash, where levels leapt to a 12-month high. The survey is the least bullish since October 2020. 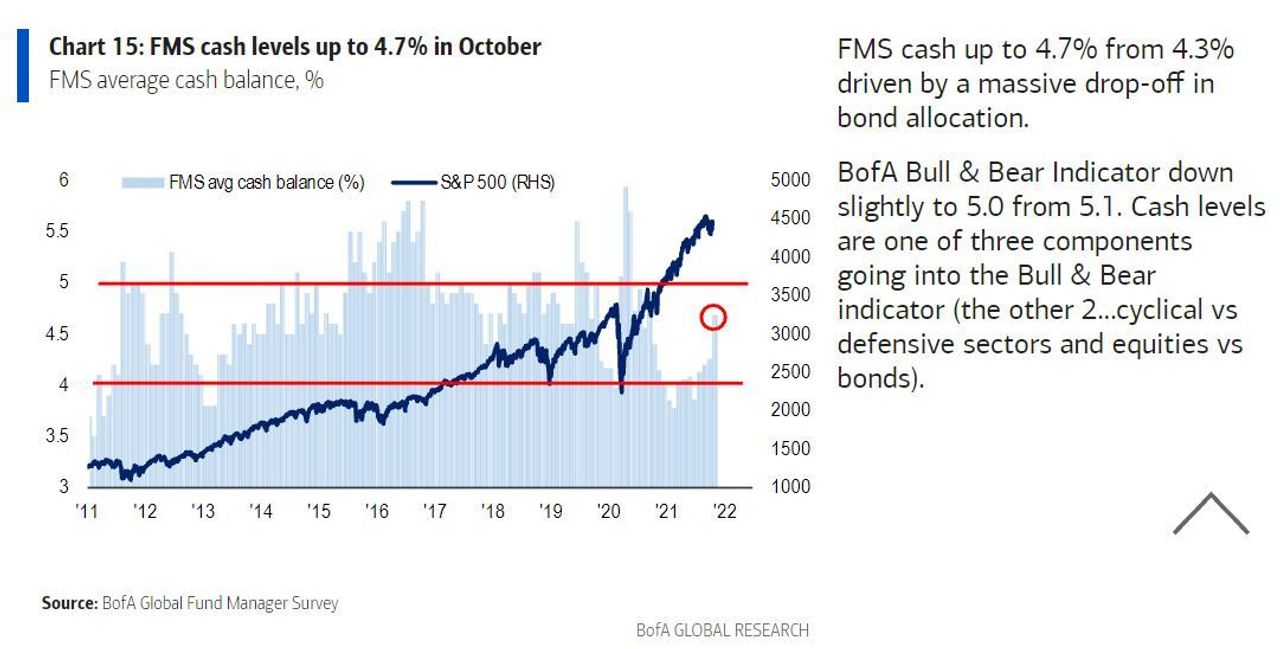 Our call of the day takes a look at just where those managers are putting money. One big difference between this month and last was that big shift to cash and a sizable move out of bonds. Global bond allocation, in fact, dropped to a net -80%, the lowest ever, as inflation fears continue to push up interest-rate hike expectations.

Money is still going into stocks, which jars a bit when considering the negativity on the global economy. 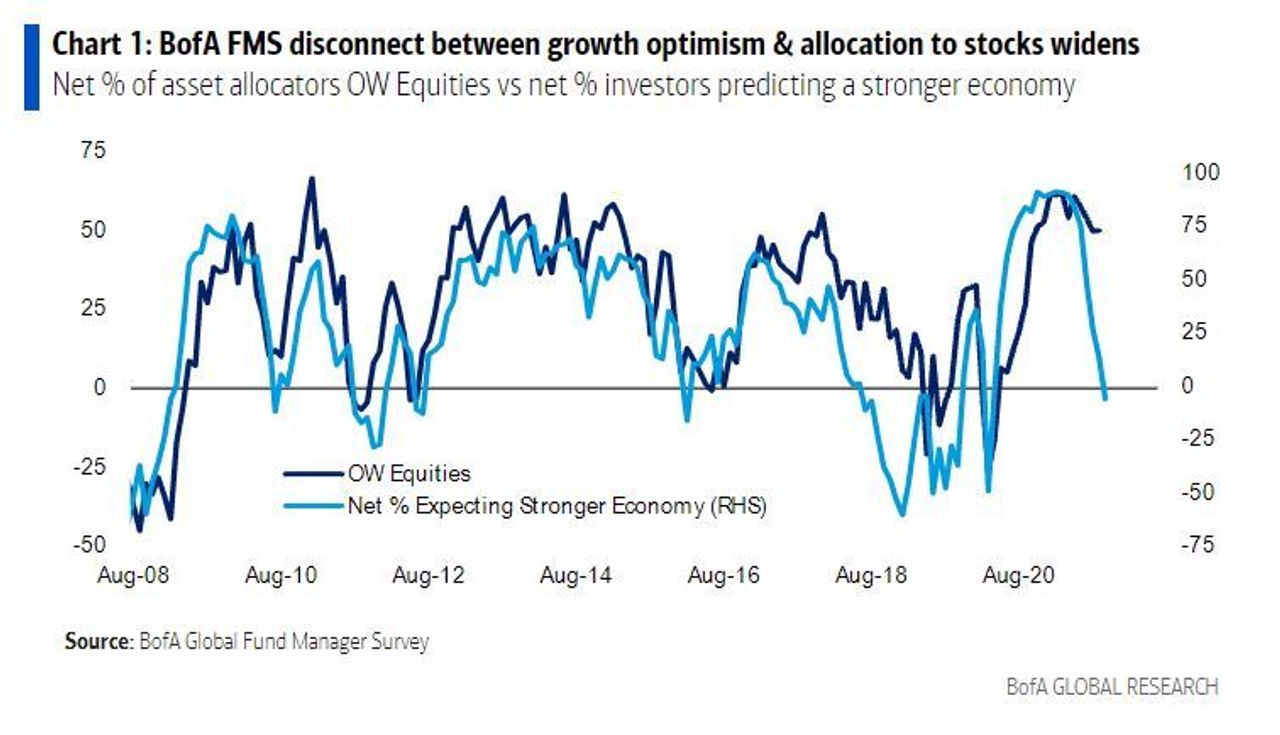 Read:
Fund managers haven’t been this pessimistic on the economy since the early days of the pandemic

Where are they positioning now? Long on those assets exposed to inflation and short on those that could suffer from a Federal Reserve taper of its stimulus efforts. 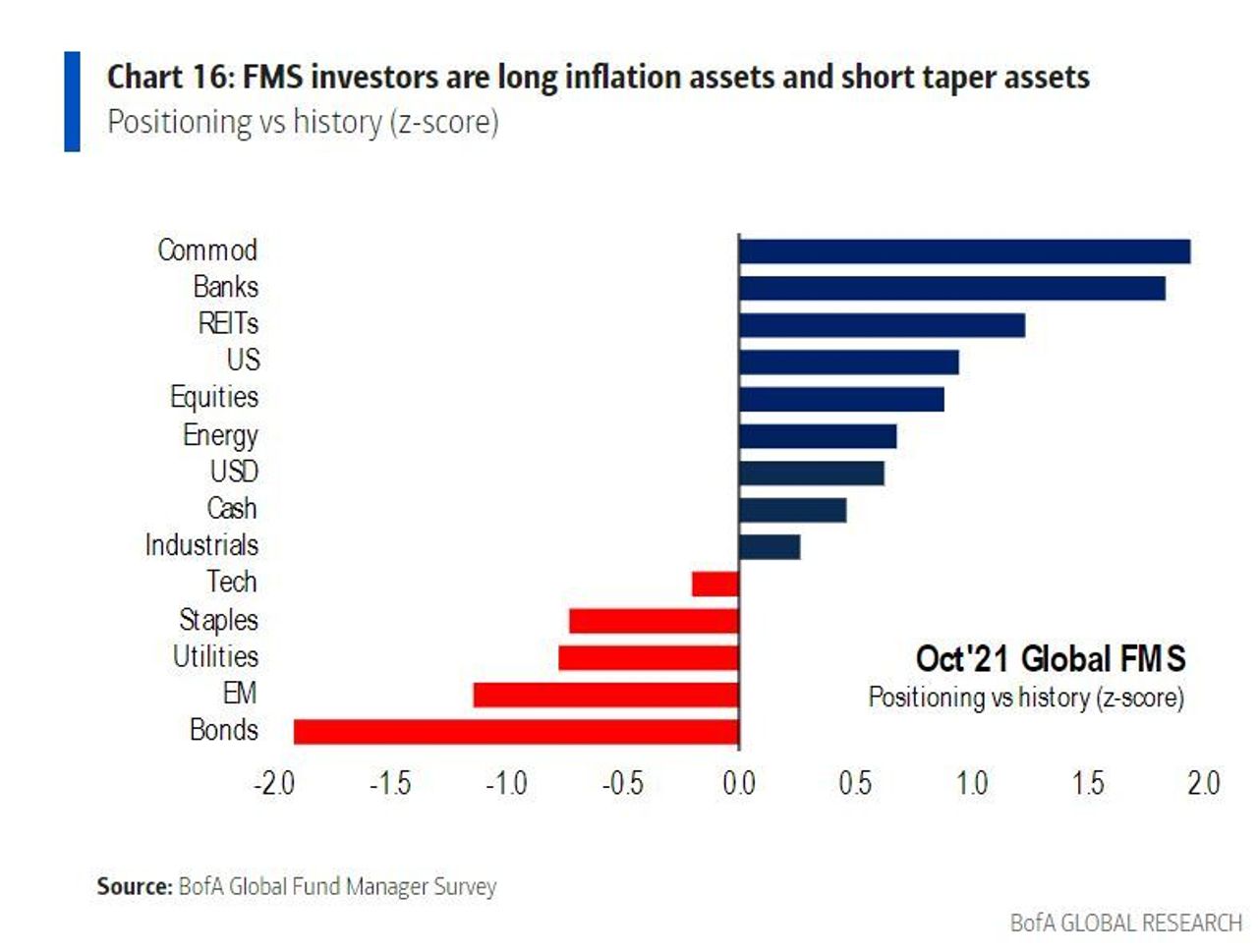 Energy, cash, banks and commodities were ahead in the latest month, and healthcare, bonds and staples were kicked to the curb. 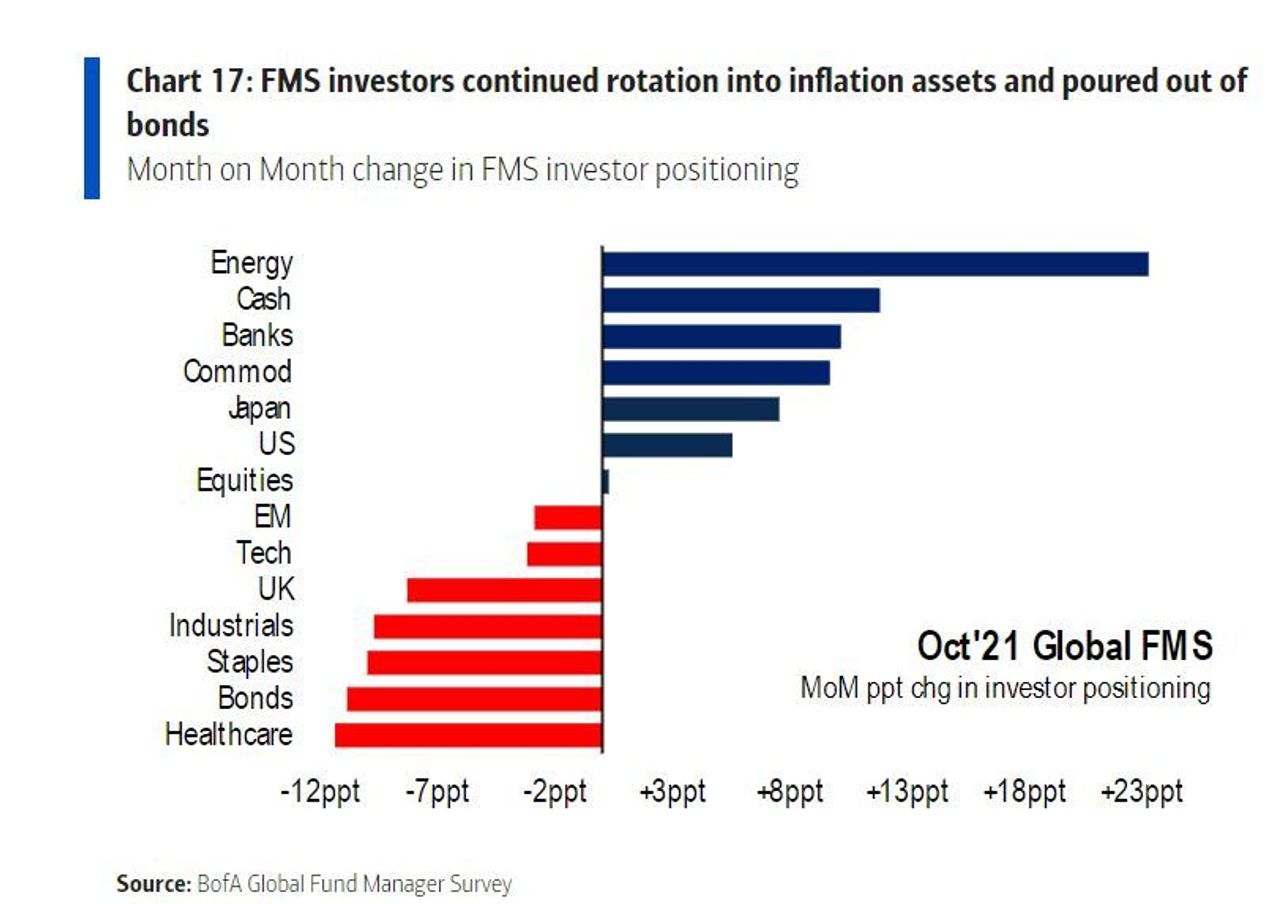 Global profit expectations have also turned negative, to the lowest level since May 2020, and corporate profit margins are expected to continue deteriorating — a net 51% of managers expecting that to happen. That means overweight commodities and banks, and underweight bonds, emerging markets and utilities — perceived as vulnerable to interest rate hikes, said Bank of America.

Here are two more worthwhile charts from the survey, the below showing 38% of investors believe inflation is permanent and 69% see it as transitory, though that gap is narrowing.

And this one on oil, that shows things a bit neck-and-neck as to whether crude will hit $100 a barrel this year, as Bank of America itself believes will happen. 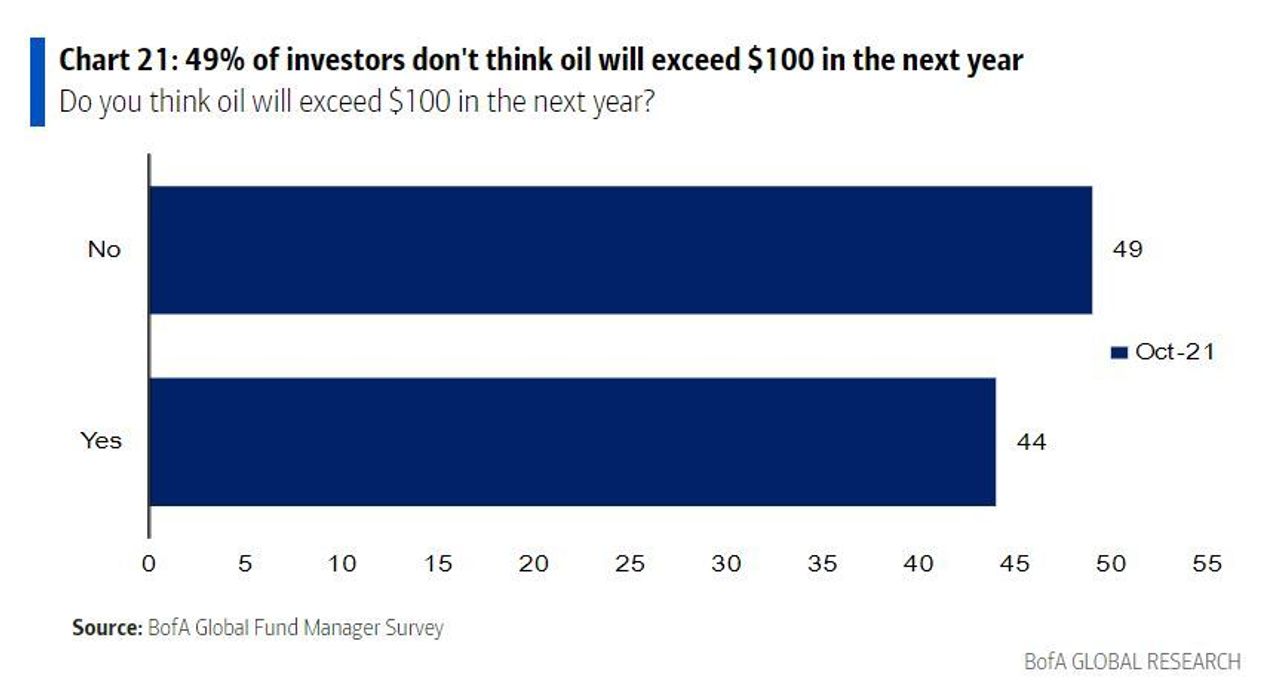 But clearly expectations for higher oil aren’t hurting the energy sector as the money flows in, even as some say beware on that bet.

Read:
Netflix and Tesla will look to buck the earnings-slowdown trend

Chinese tech group Alibaba (BABA) has developed its own processor via in-house chip unit T-Head to power its data-center servers.

Invesco, which seemed days away from bringing its exchange-traded fund to market, has put a halt to those plans. ProShares, meanwhile, is expected to list its own ETF on Tuesday, along with Valkyrie, which gets witty with its own ticker BTFD. Bitcoin (BTCUSD) itself is holding at around $62,000, keeping fresh highs at bay.

Building permits and housing starts for September are due ahead of the market open. 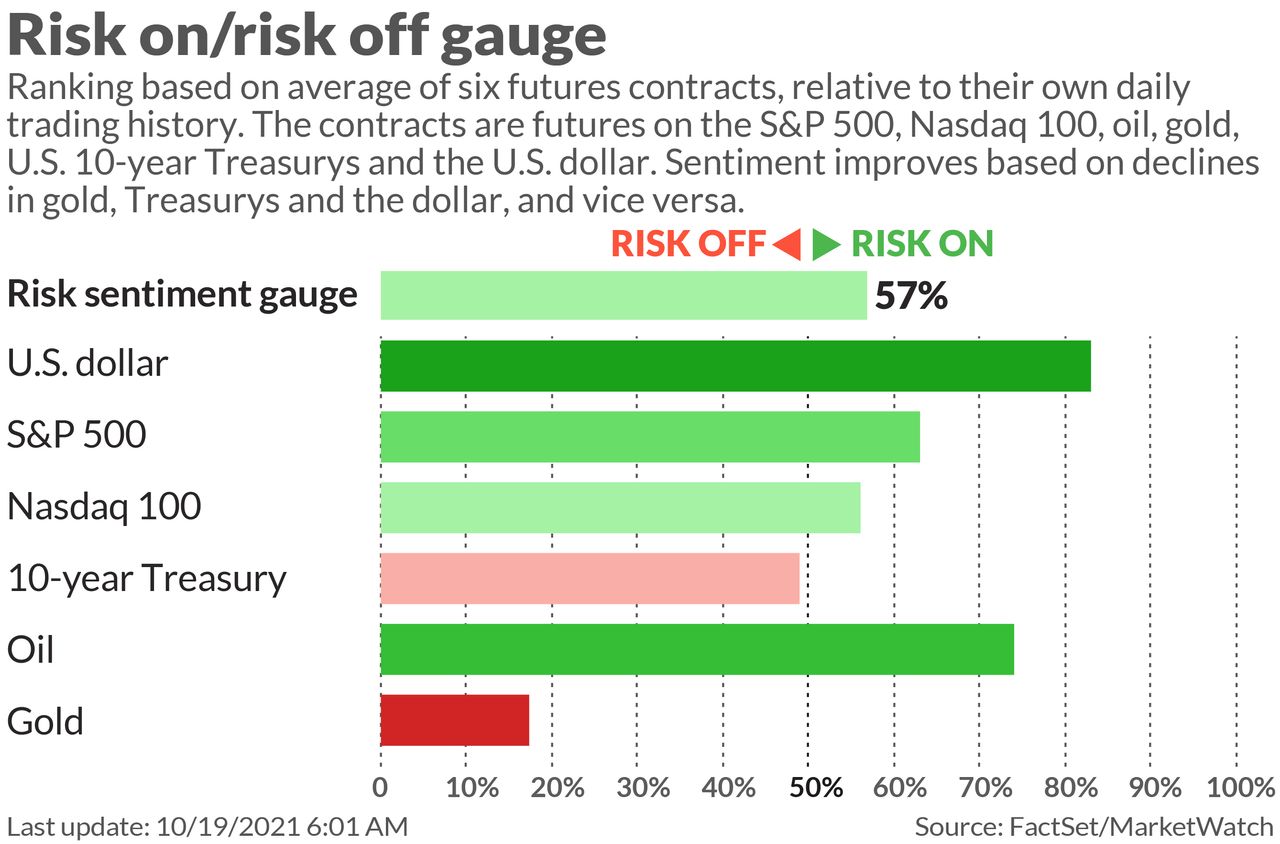 Stock futures (YM00)(ES00)(NQ00) are moving up as bond yields
(BX:TMUBMUSD10Y) cool slightly. Watch rising copper prices (HG00) as a supply squeeze has been pushing up prices. Crude oil (CL00) is also higher, along with gold (GC00), as
the dollar (DXY) is falling.

That dollar weakness has prompted a warning from Saxo Bank’s chief investment officer, Steen Jakobsen. “A more significant U.S. dollar breakdown could accelerate volatility in the FX market and see commodities prices ripping further as commodity markets and the U.S. dollar are often ‘co-dependent’ in major market moves, as was the case in the massive run-up in commodities prices in 2002-08,” Jakobsen told clients in a note on Tuesday.

Read:
Coal-fired electricity forecast to rise in the U.S. for first time in seven years

In India’s flooded south, a couple raced to their wedding in a giant cooking pot.

Diver finds what’s believed to be a 900-year old crusader sword on the Israeli seabed.

SpyGate: Early selling then a more neutral day until the end.

SpyGate: Early selling then a more neutral day until the end.