Need to Know: Here are 30 stocks that Goldman Sachs likes when the economy stutters and markets gyrate

18
SHARES
130
VIEWS
Share on FacebookShare on Twitter
Need to Know: Here are 30 stocks that Goldman Sachs likes when the economy stutters and markets gyrate 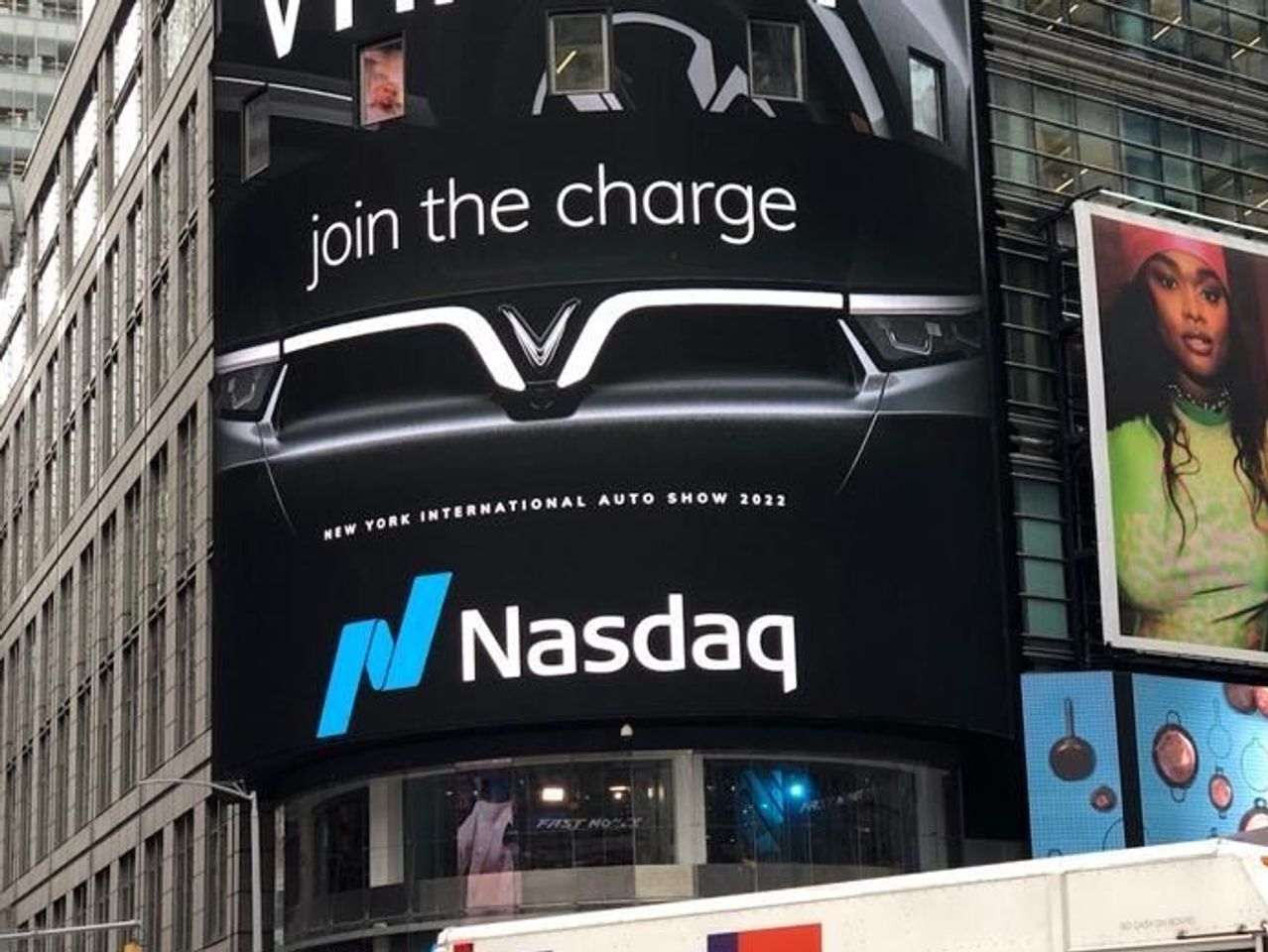 Wall Street is wobbling ahead of Tuesday’s open, as big earnings loom and with ample, gloomy distractions out there.

Fighting has ramped up again in Ukraine as the battle begins for the country’s eastern front. Apart from the tragic humanitarian crisis, the conflict is already causing the World Bank and others to cut their global growth forecasts.

Where to invest against such a volatile backdrop? Our call of the day from Goldman Sachs strategists offer up a group of equities they say can hold their in these uncertain times.

“Stable stocks –- those with low share price and earnings growth volatility -– typically outperform in environments of slowing economic growth and tightening financial conditions,” say a team led by Ben Snider and David Kostin in a note from late Monday. 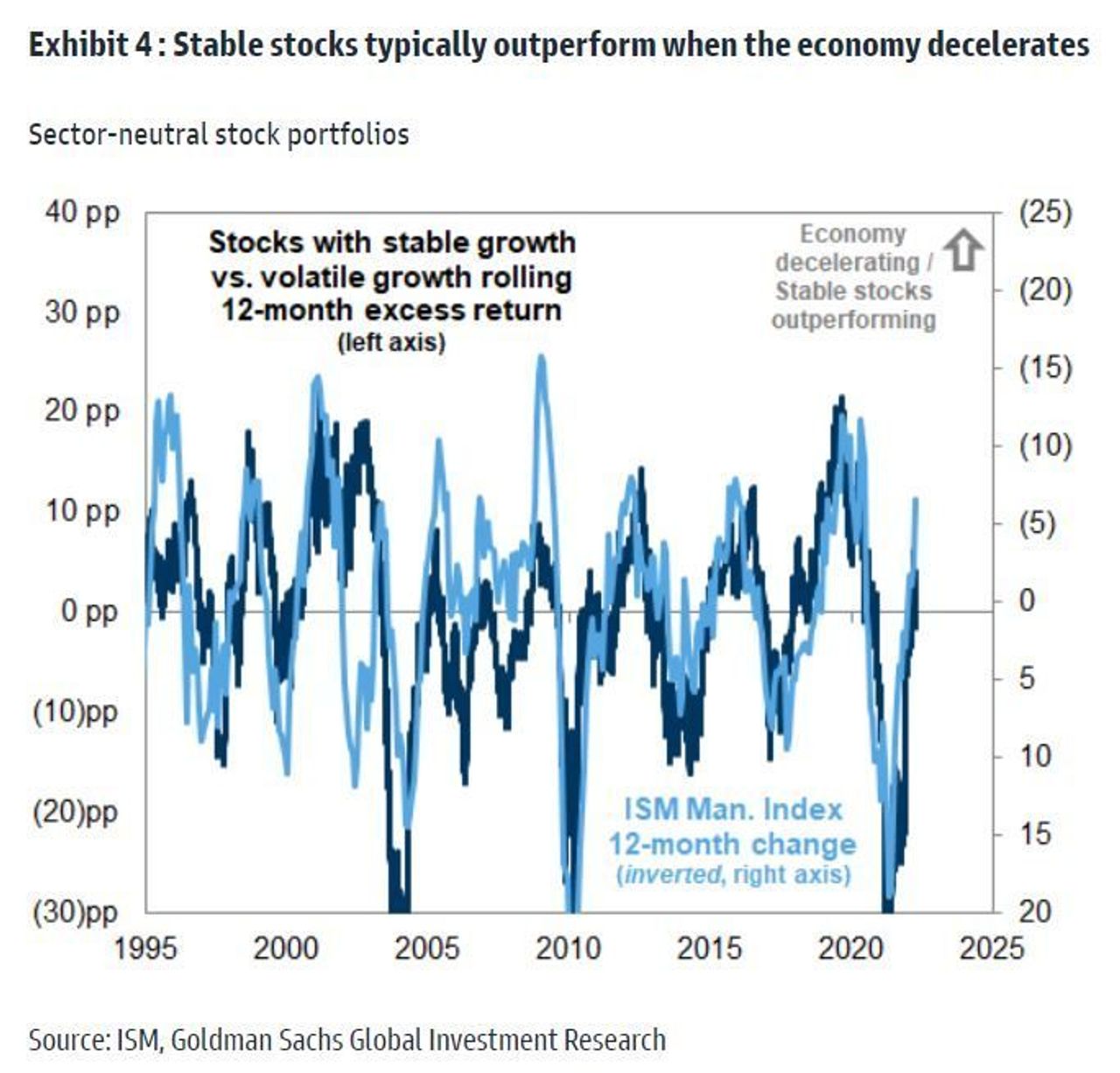 After lagging dramatically against a strong global economic backdrop for the past two years, their stable stocks basket has outperformed the S&P 500 (SPX) by 5 percentage points over the past six months, with more “room to run,” they say. 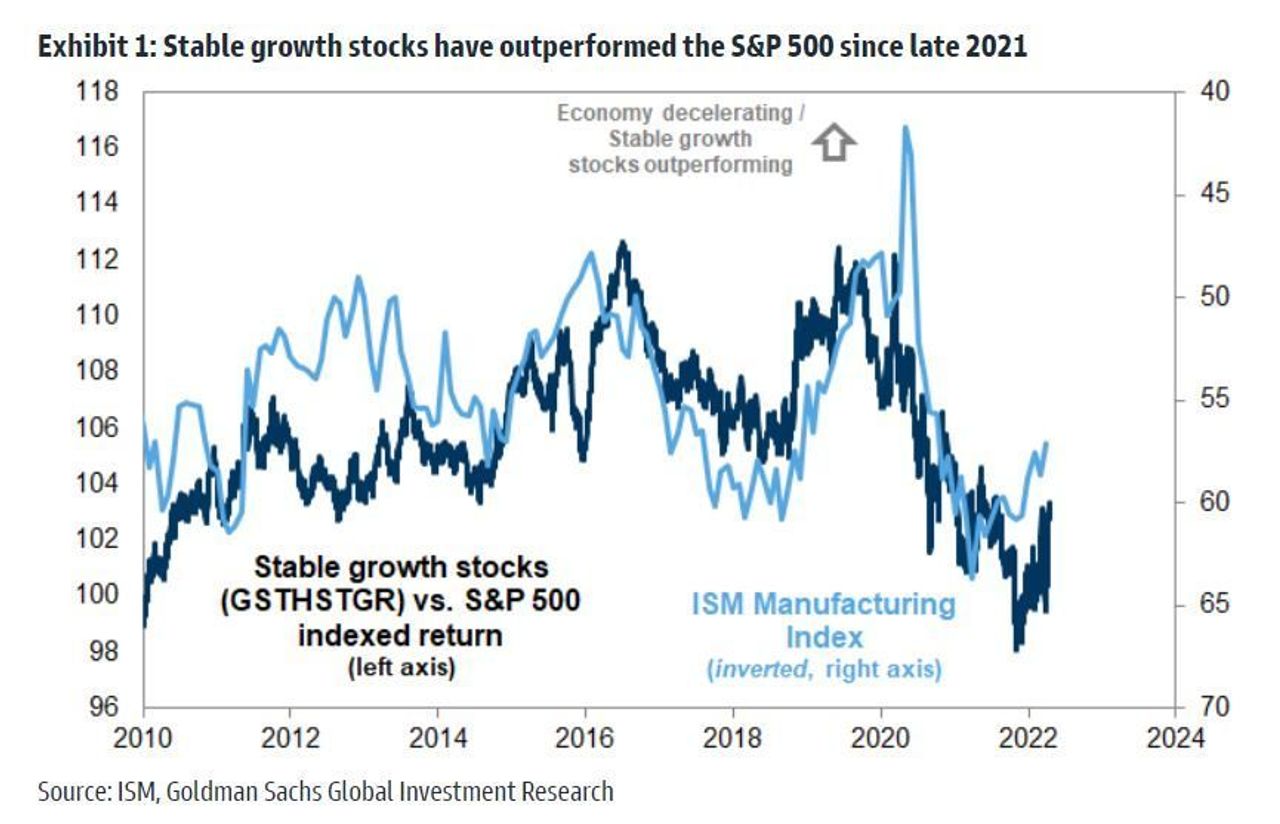 Those stocks remain cheap, trading at a price/earnings premium of around 8% versus a 35-year average of 15%. During a similar batch of slowing growth and Fed tightening in 2018, the premium hovered at 20% for that group, they note.

“Despite recent outperformance, stable stocks do not appear to be pricing the slowdown suggested by recent industry rotations or our economists’ GDP forecasts,” said Goldman.

As for the stock names, their stable basket consists of 50 Russell 1000 (RUI) stocks with the most stable EBITDA growth over the past 10 years. Excluded are those whose biggest year-over-year earning fall in the past five years ranked in the bottom 10% of their sector. Stocks in the bottom 10% of their sector based on consensus 2023 EPS expectations are also excluded.

Below are roughly 30 of the 50 stocks Goldman listed:

Netflix (NFLX) is in the earnings spotlight, with investors looking for a rebound from the streaming giant’s results, due after the market close. Ahead of that, Johnson & Johnson (JNJ) stock is down on disappointing results and Hasbro (HAS) also falling on earnings news. IBM (IBM) is also reporting late.

United (UAL), Southwest , American (AAL) , Alaska Air (ALK),
Delta (DAL) and JetBlue (JBLU) are creeping higher after a judge in Florida struck down the national mask mandates for the transportation sector and those companies dropped mask mandates. There was cheering and jeering on some flights: 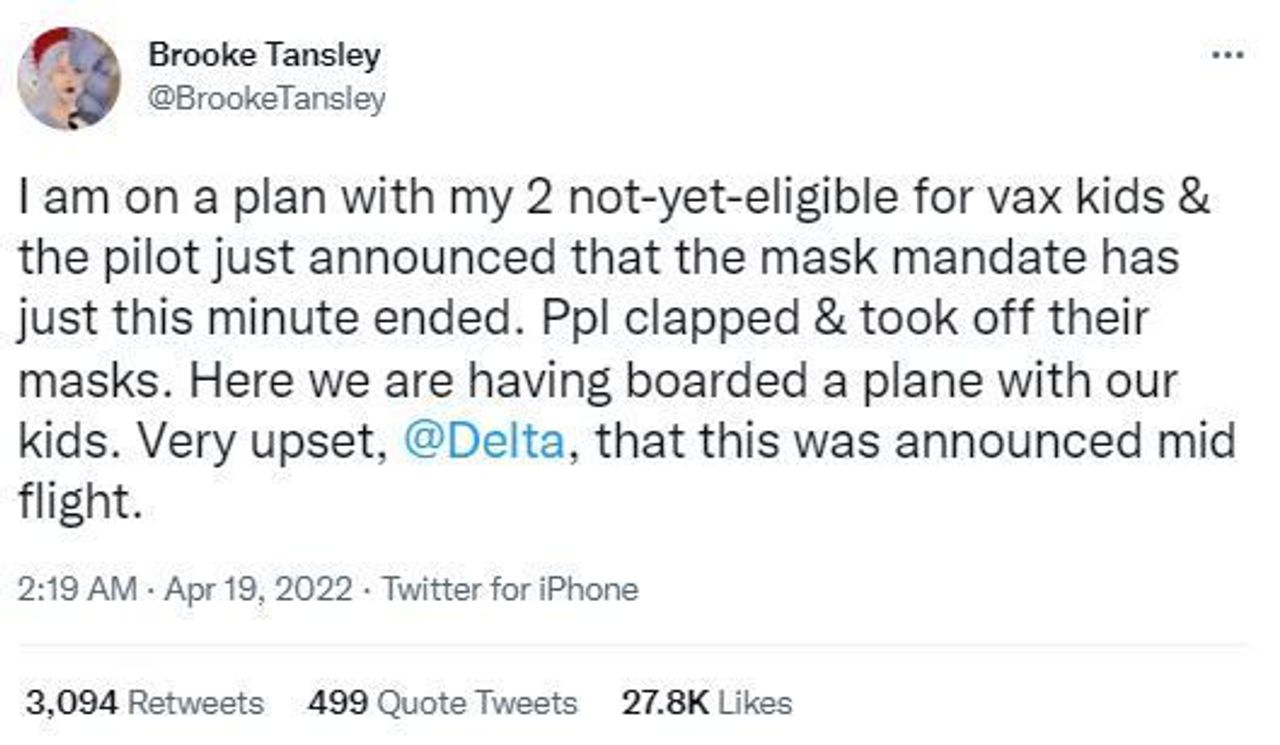 St. Louis Fed President James Bullard said he wouldn’t rule out a 75-basis point rate hike, with Chicago Fed President Charles Evans and Minneapolis’s Neel Kashkari due to speak Tuesday. Housing starts are ahead of that.

G20 finance ministers and central bankers meet in Washington later, with a focus on fallout for the global economy from the Ukraine war.

Russia has issued a new ultimatum to Ukrainian holdouts in Mariupol, as its forces launched a fresh attack on the eastern front of the country in what many see as a new phase of the war. 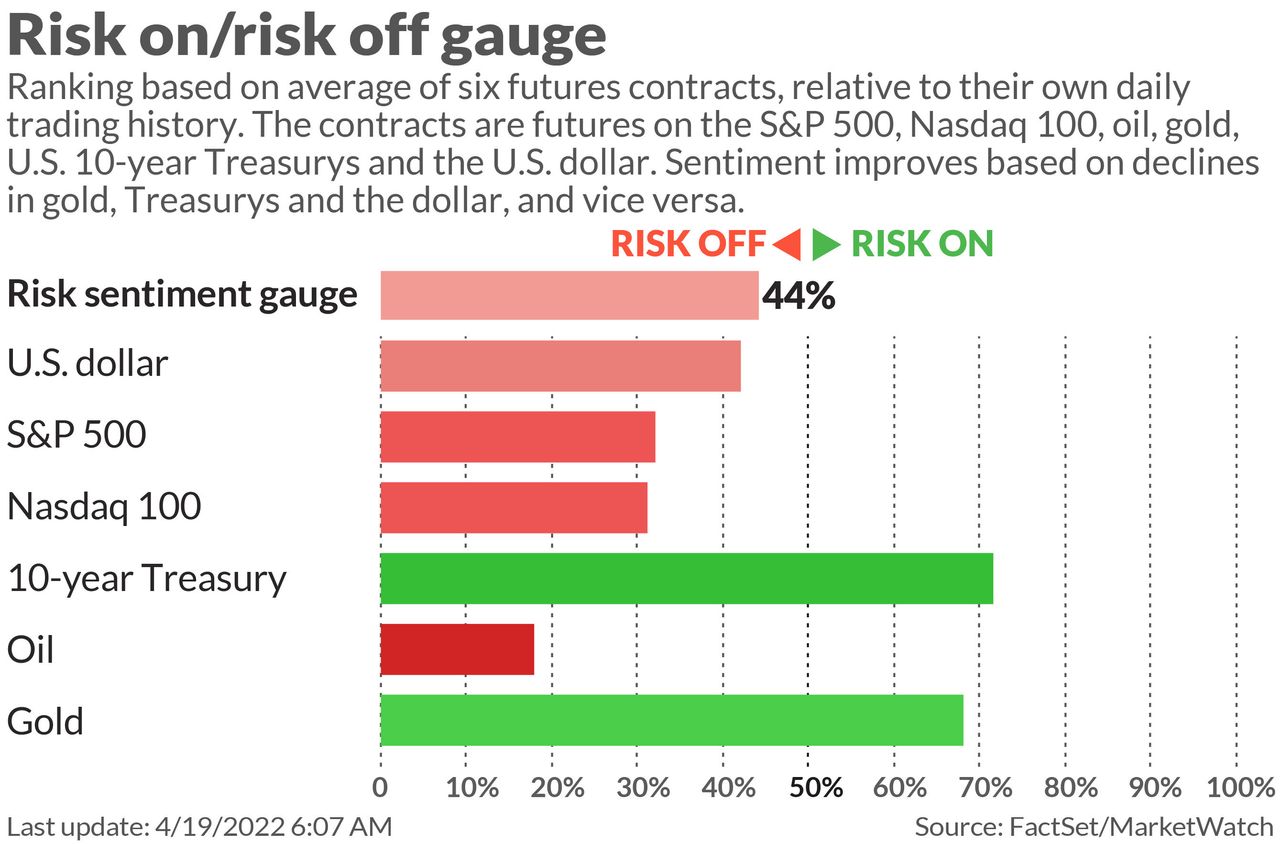 Stock futures (YM00)(ES00)(NQ00) were steady, while bond yields (BX:TMUBMUSD10Y)(BX:TMUBMUSD02Y) hold steady. Oil (CL00)(BRN00) and natural-gas prices (NG00) are down. Europe stocks (XX:SXXP) are falling and Asia was mixed, with a 2% tumble for the Hang Seng (HK:HSI), led by tech despite a supportive move by China’s central bank. Elsewhere, the Japanese yen (USDJPY) keeps sliding and cryptos are bouncing back with bitcoin (BTCUSD) back over $40,000.

“While the close proximity in the timing between the first [Fed] hike and curve inversion perhaps points to a more truncated late-cycle period this time, the current cross-market setup does not point to a return to the correlation between curve flattening and subsequent bearish equity performance that existed during the late-1960s and through most of the 1970s,” said a JPMorgan team led by Jason Hunter.

They see a likely floor for the index at 4,100 to 4,300, and “view the current price action as a consolidation related to the initial removal of accommodative monetary policy.”

These were the most-searched tickers on MarketWatch as of 6 a.m. Eastern Time:

The “cash me outside” teen who shot to fame by trying to fight Dr Phil, pays all cash for $6.1 million mansion.