Need to Know: Here’s where JPMorgan is seeing stock bargains, as the bank lifts its end-year S&P 500 target to 4,600

15
SHARES
106
VIEWS
Share on FacebookShare on Twitter
Need to Know: Here’s where JPMorgan is seeing stock bargains, as the bank lifts its end-year S&P 500 target to 4,600

Here’s where JPMorgan is seeing stock bargains, as the bank lifts its end-year S&P 500 target to 4,600
By Barbara Kollmeyer 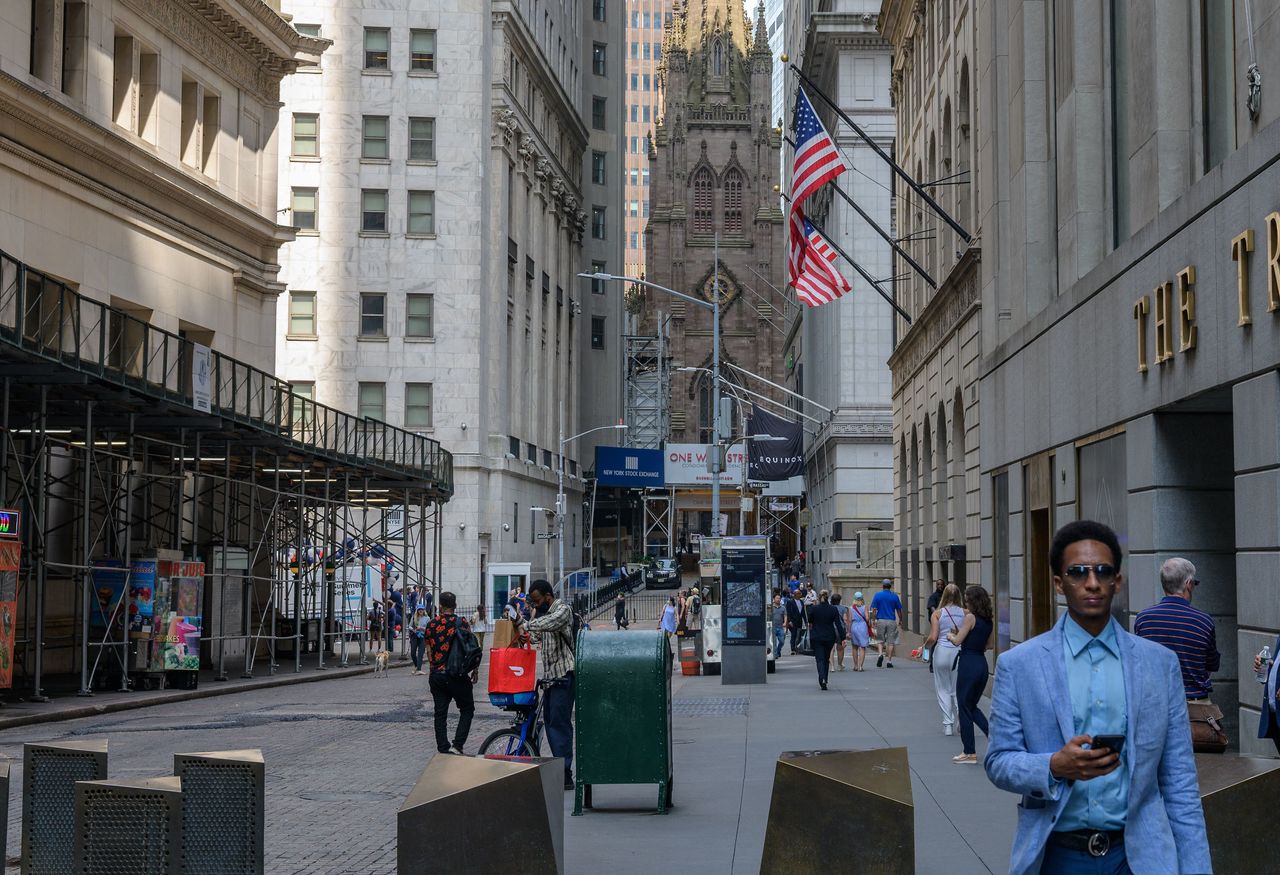 Stock futures are looking up for Tuesday, perhaps a sign the market’s teflonlike tendencies that have helped it shake off crisis after crisis remain. Assets took a dive on Monday amid fears highly contagious coronavirus variants could thwart a “back-to-normal” economy.

“So investors are facing the very real prospect that limitations on daily life could be a factor affecting markets and corporates even into 2022, which is a far cry from the hopes many had at the start of this year when the vaccine rollout began,” summed up a team of Deutsche Bank strategists led by Jim Reid.

“We remain constructive on equities and see the latest round of growth and slowdown fears premature and overblown,” said the JPMorgan team, led by Dubravko Lakos-Bujas. “Even though equity leadership and bonds are trading as if the global economy is entering late cycle, our research suggests the recovery is still in early-cycle and gradually transitioning toward mid-cycle.”

For example, they see “a more sustained cycle, for the U.K. and Asia, even though macro indicators appear to be cresting. The U.S. recovery is rooted in labor market improvements, a “still very strong consumer setup,” healthy company fundamentals, central bank support and potential for more fiscal stimulus, said the strategists.

As for the delta coronavirus variant, JPMorgan doesn’t see the latest COVID-19 wave derailing broader economic reopenings, thanks in part to low to stable hospitalizations from vaccinations. “As argued previously, reopening of the economy is not an event, but rather a process, which in our opinion is still not priced-in, and especially not now given recent market moves,” said the strategists.

Consumer discretionary (retail, travel and leisure), semiconductors, banks and energy are “strong buys at current levels,” due to recent pullbacks that have created lots of “attractive opportunities.” The team noted that an increasing number of reopening stocks are 30% to 50% off first-quarter 2021 highs, with some even reversing back to June 2020 levels when COVID-19 uncertainty was worse. 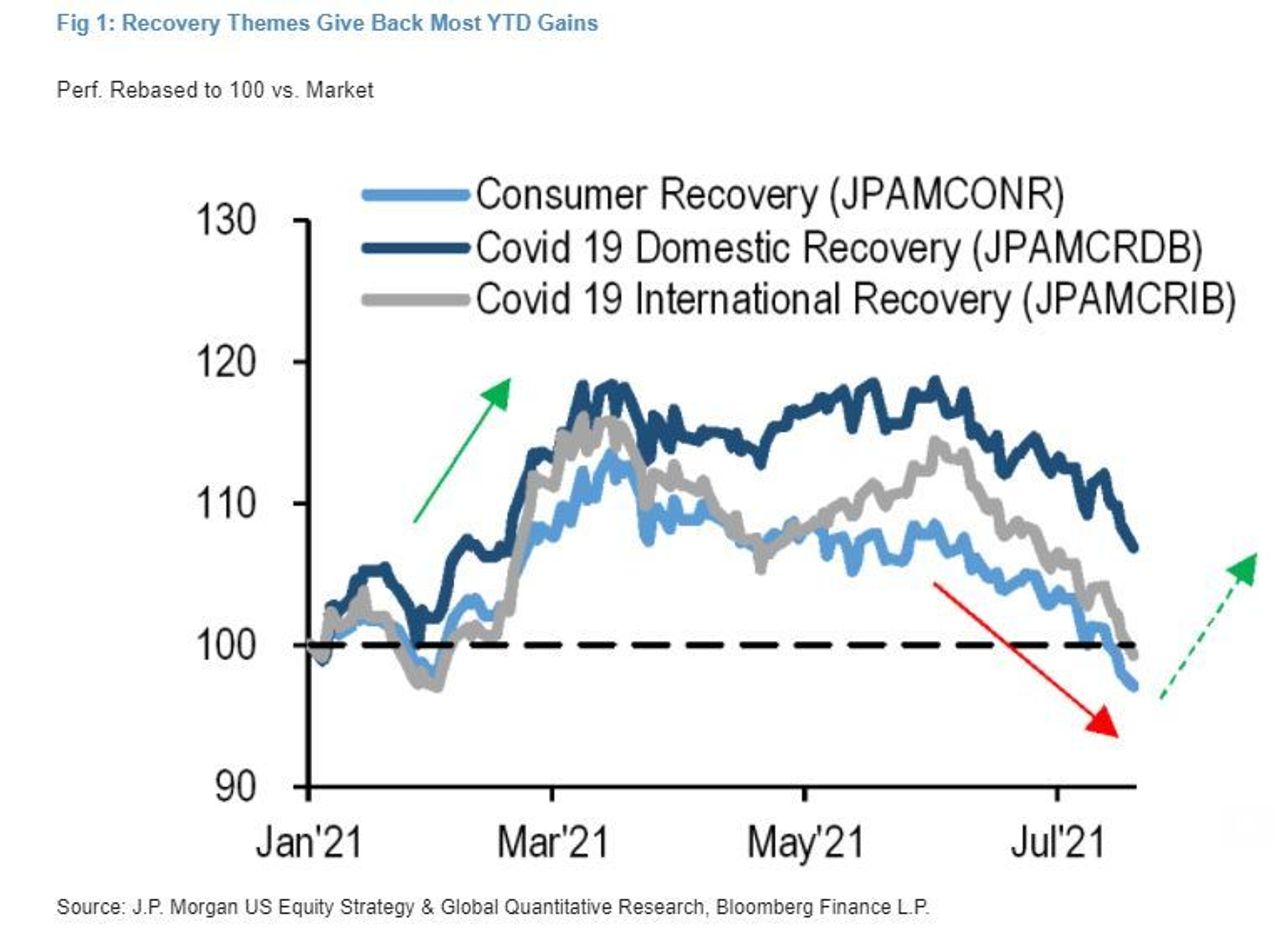 For large-cap energy stocks, JPMorgan sees “increasing potential for a sharp short squeeze and move higher, given its extreme disconnect from oil fundamentals.” For semiconductors, the team pointed to analysis showing the sector is only 30% to 40% into the current upcycle, with strong annual growth seen into next year with upward earnings revisions.

Growth stocks are no longer such a straightforward trade, given that related sectors and themes have “significantly outperformed and are now increasingly vulnerable to yields normalizing off of current low levels and to profit-taking as we enter earnings season,” said Lakos-Bujas and the team.

While the prospect of bond yields moving lower is a risk for the overall market, the bank sees those normalizing and retracing higher into the second half of 2021. But it also warns that while all of the above sectors look attractive due to position unwinding by investors and a push into bonds, any reversal of those signals “could easily amplify moves in the opposite direction.” 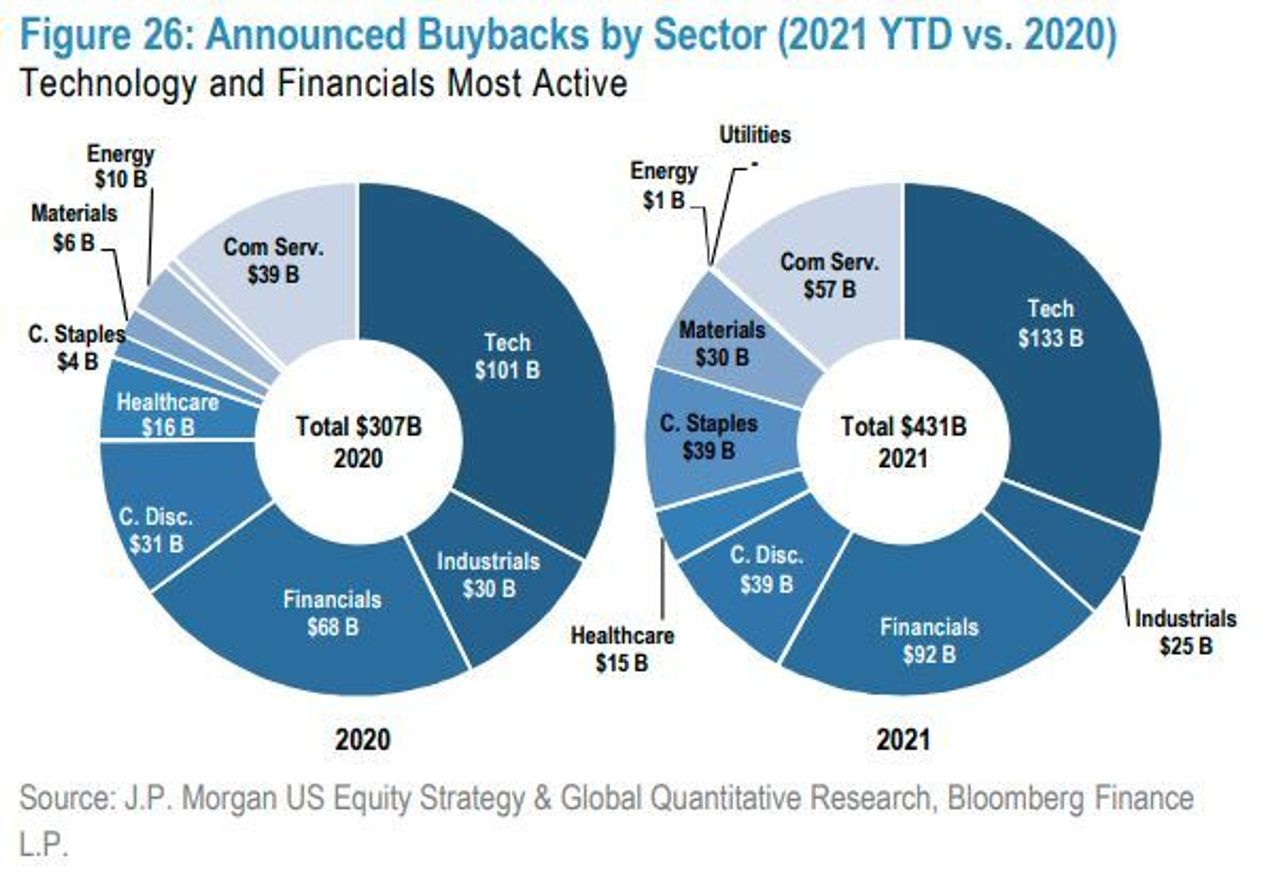 A rebound, but not for bitcoin

Stock futures (ES00)(YM00)(NQ00) are indicating a portion of
Monday’s losses could be clawed back, with European equities (XX:SXXP) also higher, and even oil is seeing a bit of a bounce. Bitcoin (BTCUSD), however, has dropped below $30,000, as Monday’s selloff continues.

A relatively light earnings day has Netflix (NFLX) in the spotlight, with the streaming-service provider set to report results after the close of markets. Meanwhile, the chief executive officers of media groups Comcast (CMCSA) and ViacomCBS
(VIAC)reportedly met in recent weeks to discuss possible overseas streaming partnerships.

Are rising COVID-19 cases starting to affect corporate plans to bring workers back to the office? Technology giant Apple (AAPL) has reportedly delayed its employees’ return by a month.

Meanwhile, movie-theater chain AMC Entertainment (AMC) plans to reopen two of the top-grossing theaters in the Los Angeles area. They have been shut for more than a year.

Shares of International Business Machines (IBM) are up, after the tech stalwart posted revenue growth for a second consecutive quarter that beat expectations.

Europe’s “Titanic of the mountains” gets a second chance.

Need to Know: An era of scarcity is coming. Three stocks to ride out stickier-for-longer inflation, from this fund manager.