Need to Know: Megacap tech stocks have been on a roll. They could thrive even if interest rates turn higher again.

13
SHARES
96
VIEWS
Share on FacebookShare on Twitter
Need to Know: Megacap tech stocks have been on a roll. They could thrive even if interest rates turn higher again.

Megacap tech stocks have been on a roll. They could thrive even if interest rates turn higher again. 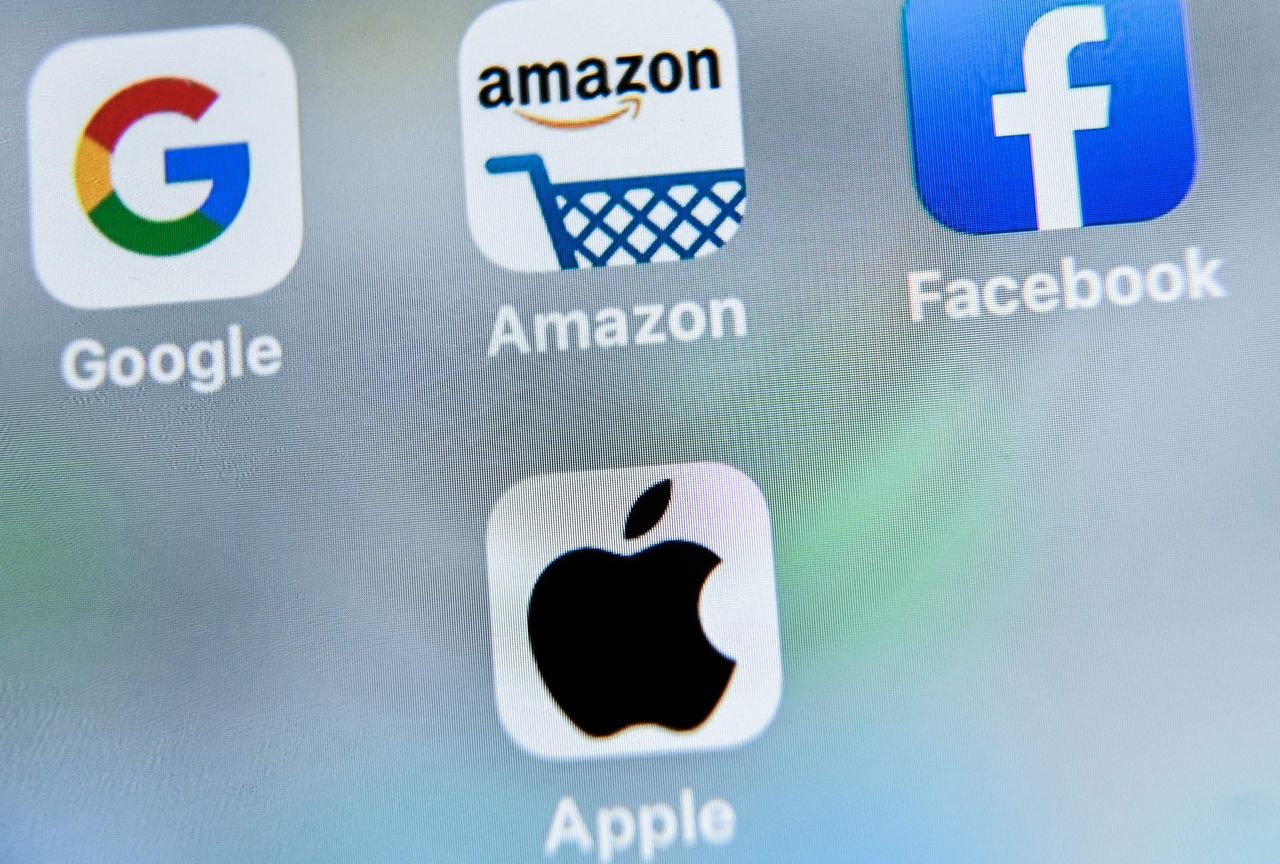 The megacap technology stocks have been outperforming the broader market of late. The NYSE FANG+ index (XX:NYFANG) — which includes Facebook (FB), Alphabet (GOOGL), Amazon (AMZN) and Apple (AAPL) — has climbed 5% over the last month, compared with just 1% growth for the equal-weighted S&P 500 (XX:SP500EW). 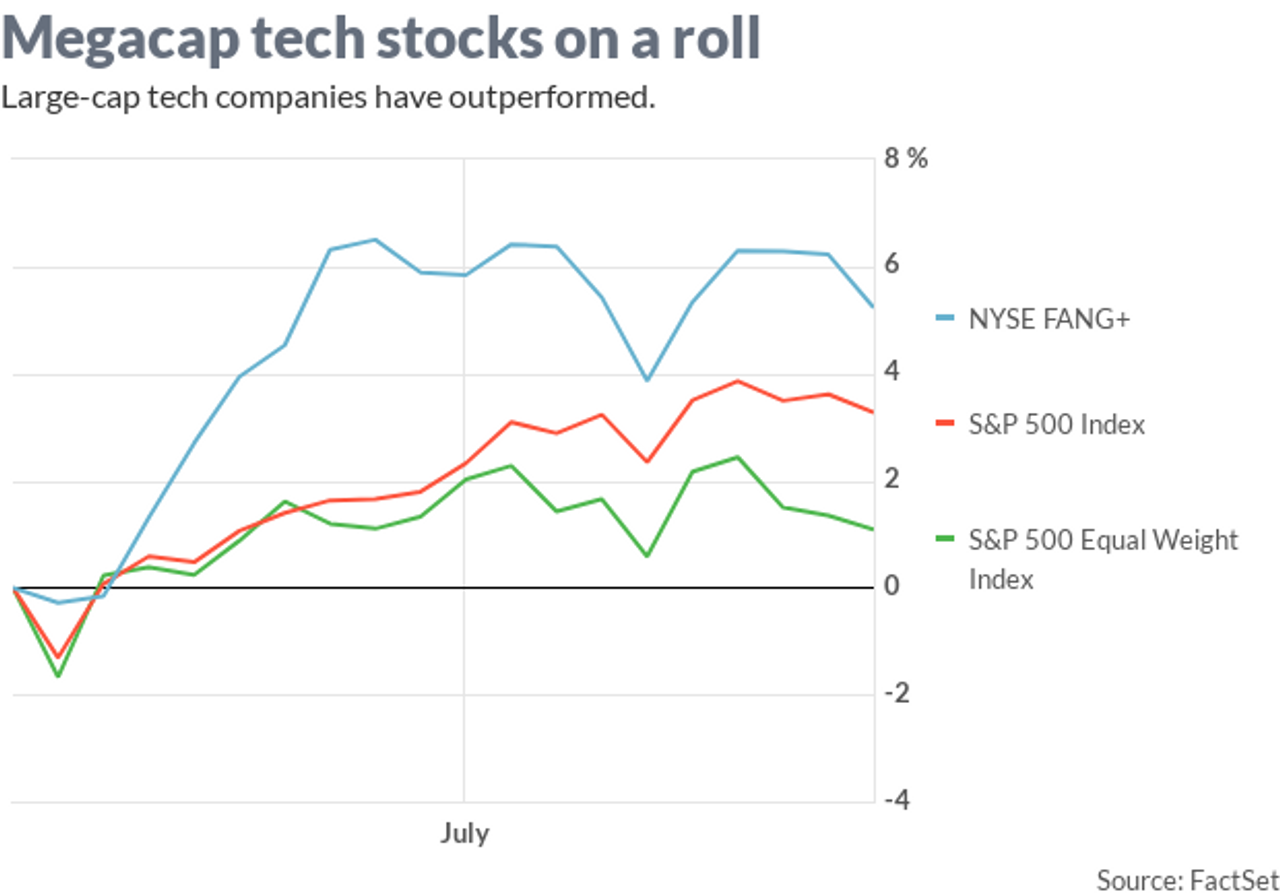 Given the relief in bond yields, that makes intuitive sense. Tech stocks struggled when the yield on the 10-year Treasury (BX:TMUBMUSD10Y) rose as high as 1.75%, which by Thursday’s close had fallen down to 1.30%. The knee-jerk expectation in markets is that when interest rates rise, tech stocks fall, and vice versa.

There are two reasons why that relationship should hold. The first is simply that higher interest rates choke off economic growth, raising the cost of borrowing for consumers and businesses alike. The second is that, if a stock is the sum of its discounted future cash flows, then those flows are worth less, as the rate at which they are discounted increases. For growth stocks in the technology sector that are banking on future profits more than current ones, a higher discount rate is bad news.

The thing is, that relationship, while sounding logical, isn’t borne out by historical data. Andrew Berkin studied the relationship for a paper, “What Happens to Stocks when Interest Rates Rise.” Looking at 90 years of data, the S&P 500 (SPX) rose, on average, 10.8% when bond yields fell, and rose 12.2% when bond yields rose. Even separating out periods by quintiles when yields rose the most, the S&P 500 still
gained 9%, on average. The relationship, or non-relationship as it were, also held outside the U.S., though it covered a shorter time period.

“The reality is that most of us haven’t experienced sustained rising interest rates in the past. No one knows how people will react. And indeed, shares may fall on the back of a rising rate environment, even if the history suggests otherwise. But what this paper shows us is that that is not necessarily the case, which is what is to be construed if you read any of the popular financial news outlets,” Knights said.

Key data are on tap with the U.S. retail sales report for June, and shortly after the open, the University of Michigan’s consumer-sentiment report, with the latter also eyed for the reading on consumer inflation expectations.

Moderna (MRNA) jumped 8% in premarket trade on the news the vaccine-making biotech will be included in the S&P 500.

Intel (INTC) is in talks to buy GlobalFoundries from Mubadala Investment at a valuation of about $30 billion, according to The Wall Street Journal. A deal would boost Intel’s efforts to compete with Taiwan Semiconductor Manufacturing (TSM) in making microchips for other companies.

Didi Global (DIDI) may see pressure, after China sent regulators to the ride-hailing business, further escalating pressure on the company after its U.S. initial public offering.

Floods in Germany and Belgium have led to at least 100 deaths, authorities said on Friday. 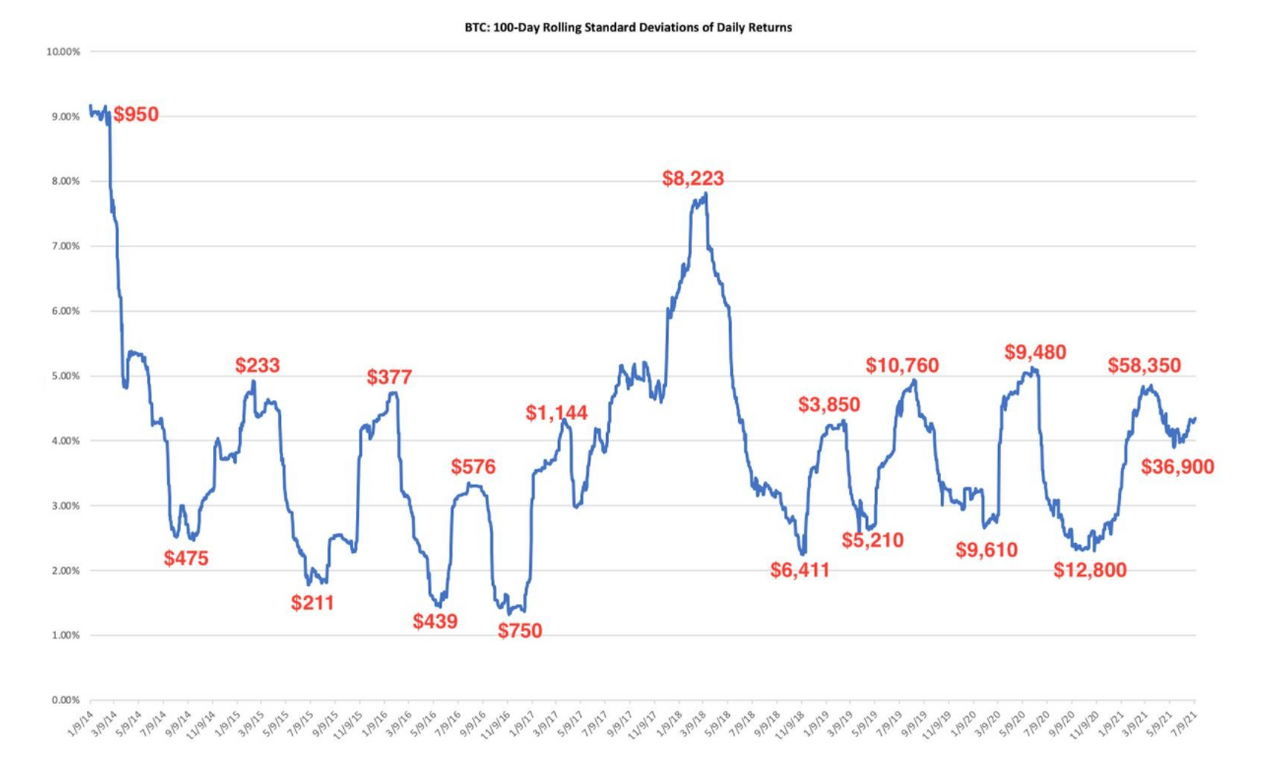 When is the best time to buy bitcoin (BTCUSD)? According to DataTrek Research, when volatility is low. “Buying during periods of low volatility (between 2% and 3%, ideally towards the low end of that range) tends to yield positive future returns. The notable exceptions (September 2014, November 2018) came after especially large rallies (November 2013, December 2017) which took longer to burn off,” it said, referring to 100-day periods for volatility.

A snake expert who said he was immune to venom turned out, alas, not to be.

Restoration work on a 16th century painting will wipe the smile off a vegetable seller.