Need to Know: Oaktree’s Howard Marks is finding bargains. ‘I am starting to behave aggressively,’ he says

14
SHARES
102
VIEWS
Share on FacebookShare on Twitter
Need to Know: Oaktree’s Howard Marks is finding bargains. ‘I am starting to behave aggressively,’ he says

Oaktree’s Howard Marks is finding bargains. ‘I am starting to behave aggressively,’ he says 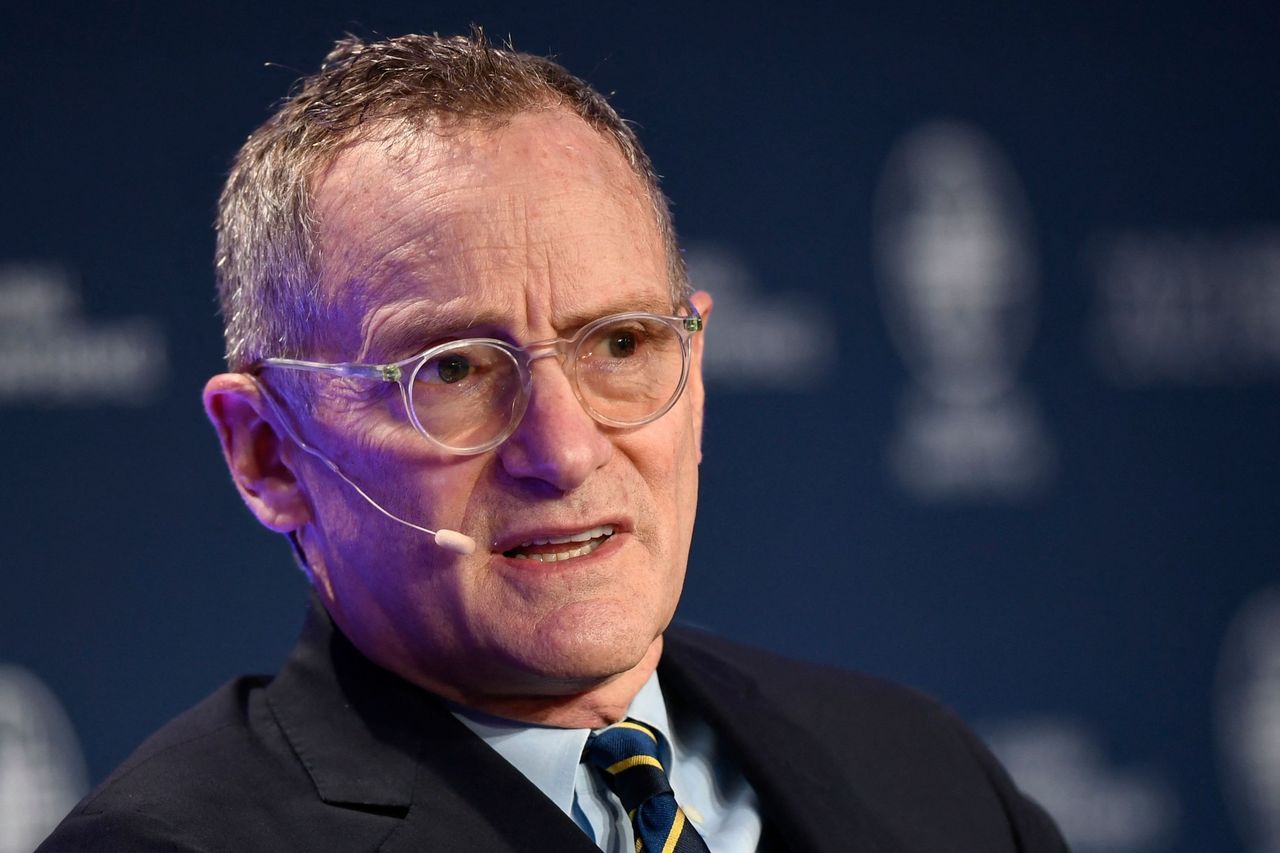 Exactly how much bounce is left in this bear market?

A little more judging by stock futures reaction this morning. Thank China for some of that as the country announced the biggest easing in COVID travel requirements since about March 2020.

China’s news may add to the sense that inflation has peaked, given the supply constraints that the lockdown there has produced.

That brings us to our call of the day from a well known voice on Wall Street, Oaktree Capital’s founder Howard Marks, who says now’s the time for “bargain” hunting follow the market’s selloff.

Marks is best known for his lengthy investment letters, and warnings. In early May he cautioned over bull-market excess, which seems as prescient as his similar year-earlier warning.

“Today I am starting to behave aggressively,” he told the Financial Times in an interview. “Everything we deal in is significantly cheaper than it was six or 12 months ago.”

“Things may well go lower. In that case, I hope we’ll have the will to buy more. It makes no sense to say: “I’m not going to buy until we reach bottom.” We never know when we’re at the bottom, and certainly I’m not saying we are today,” Marks said.

The past year saw him pushing for more defensive investing, as he expected interest rates would go up, pushing asset prices lower.

He had a particular warning for investors, lulled into complacency by a long bull market, and taking risks without considering the downside. “And they push into new areas that they have never been in before,” such as private assets, where he warns that when withdrawals are hitting an “illiquid market with declining values, those funds melt down.”

Bargain hunting does not include bitcoin and other cryptocurrencies, as he says “assets that don’t have cash flow don’t have intrinsic value.” Whether the young enthusiasts or the older doubters are right should be decided in about 10 years, he said.

Airlines and other China-related travel stocks surged, with travel-booking group Trip.com (TCOM) up 22%, after the government cut COVID quarantine rules for foreign travelers from 21 to 10 days.

The G-7 is expected to announced temporary price caps on Russian gas and oil.

CVS (CVS),  Walmart (WMT)and Rite Aid (RAD) have been limiting
purchases of morning-after pills amid high demand following the Supreme Court ruling stripping the constitutional right to abortions. Instagram and Facebook (META) have been taking down posts offering those pills.

On the data front, trade in goods data is due ahead of the open, followed by the S&P Case-Shiller home price index and consumer confidence. We’ll also hear from Richmond Fed President Tom Barkin early and San Francisco Fed President Mary Daly.

The Securities and Exchange Commission has fined Ernst & Young a record $100 million for employees cheating on CPA ethics exams. 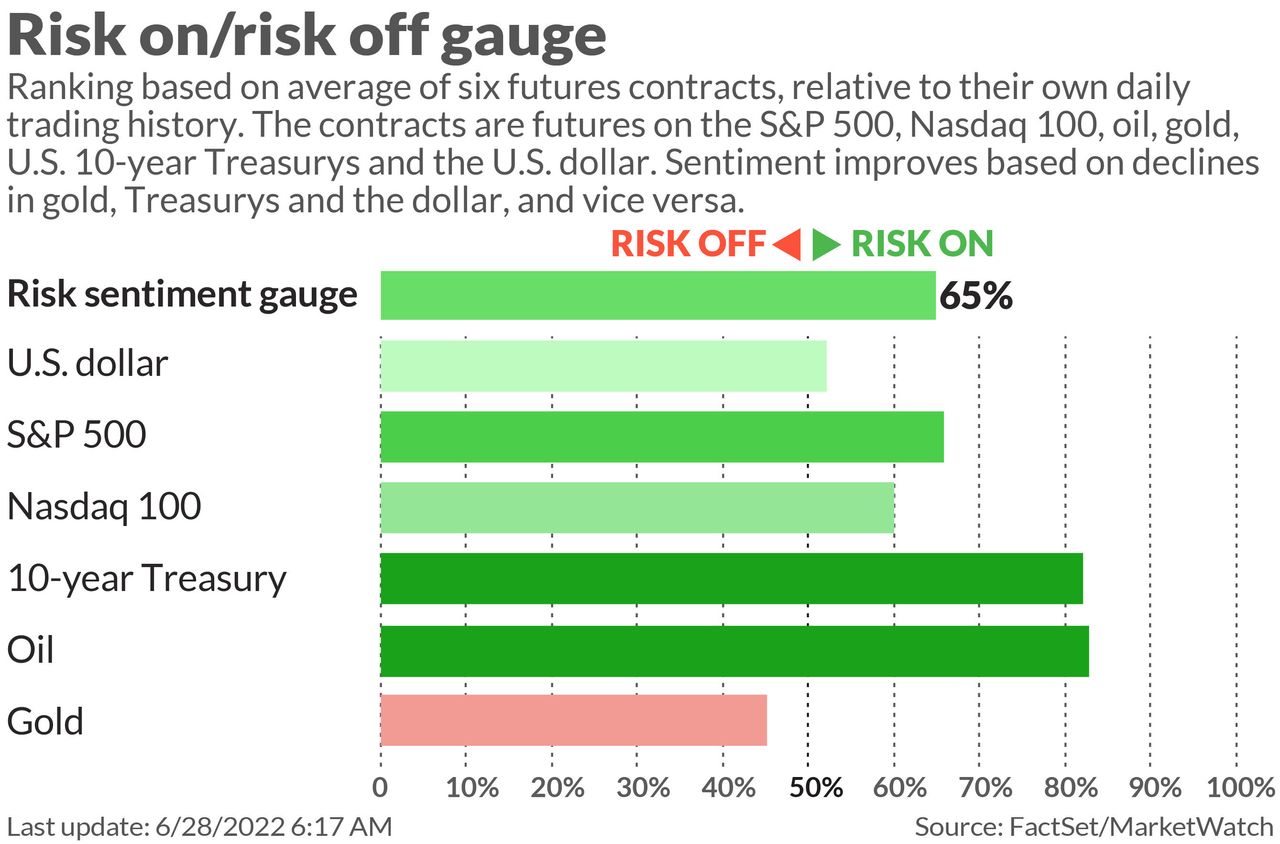 Here’s one of the reasons investors have been a little more optimistic lately — an easing in commodity prices (for now at least). Chart from Peak Trading Research: 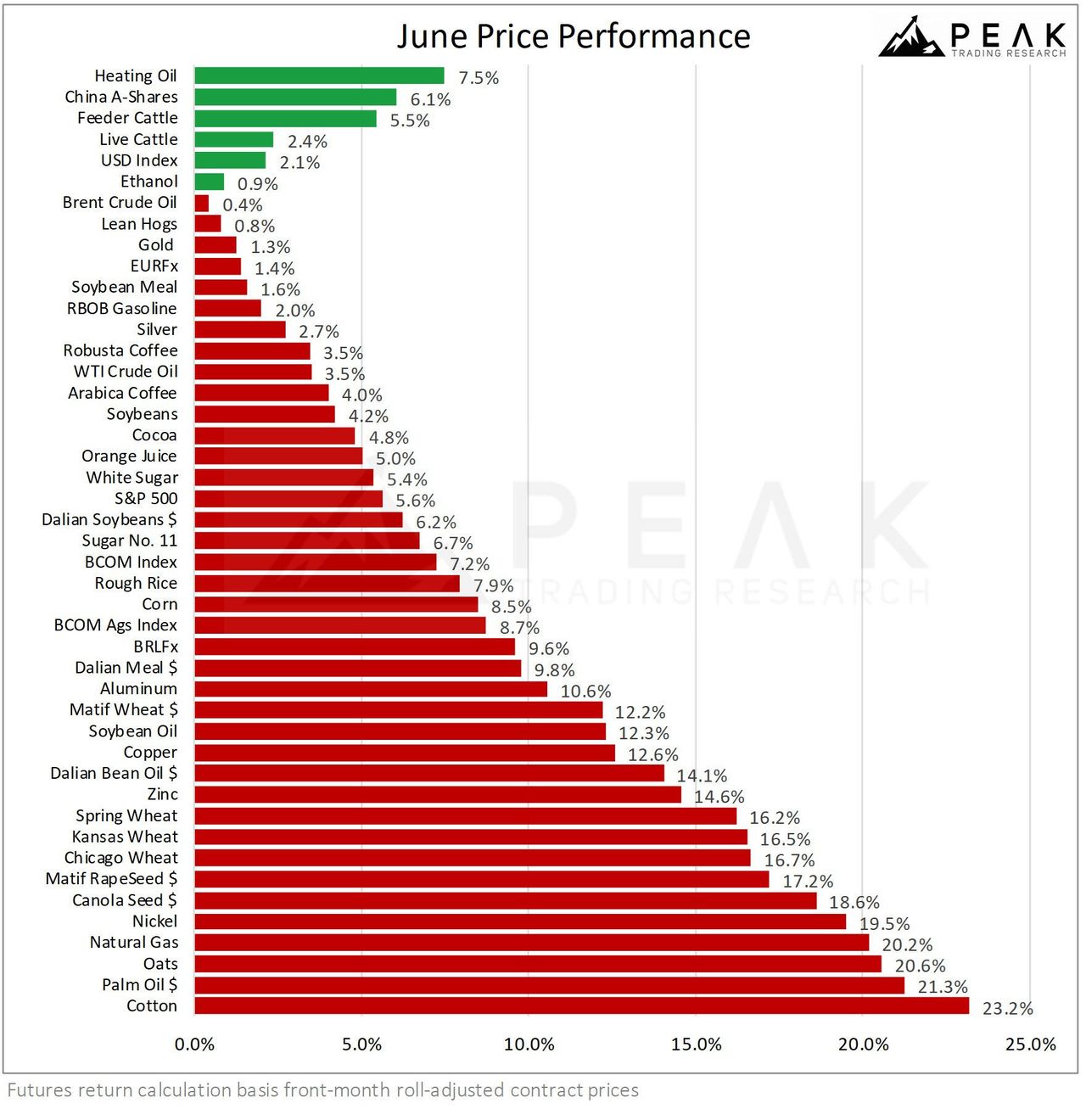 These were the top-searched stock-market tickers on MarketWatch as of 6 a.m. Eastern Time:

Emergency rescues in the Spanish seas will cost you.

Is love blind? Check out the responses to this tweet: