15
SHARES
104
VIEWS
Share on FacebookShare on Twitter
Need to Know: The stock market is ‘vulnerable to good news’ and a 10% to 12% rally, says this strategist

The stock market is ‘vulnerable to good news’ and a 10% to 12% rally, says this strategist 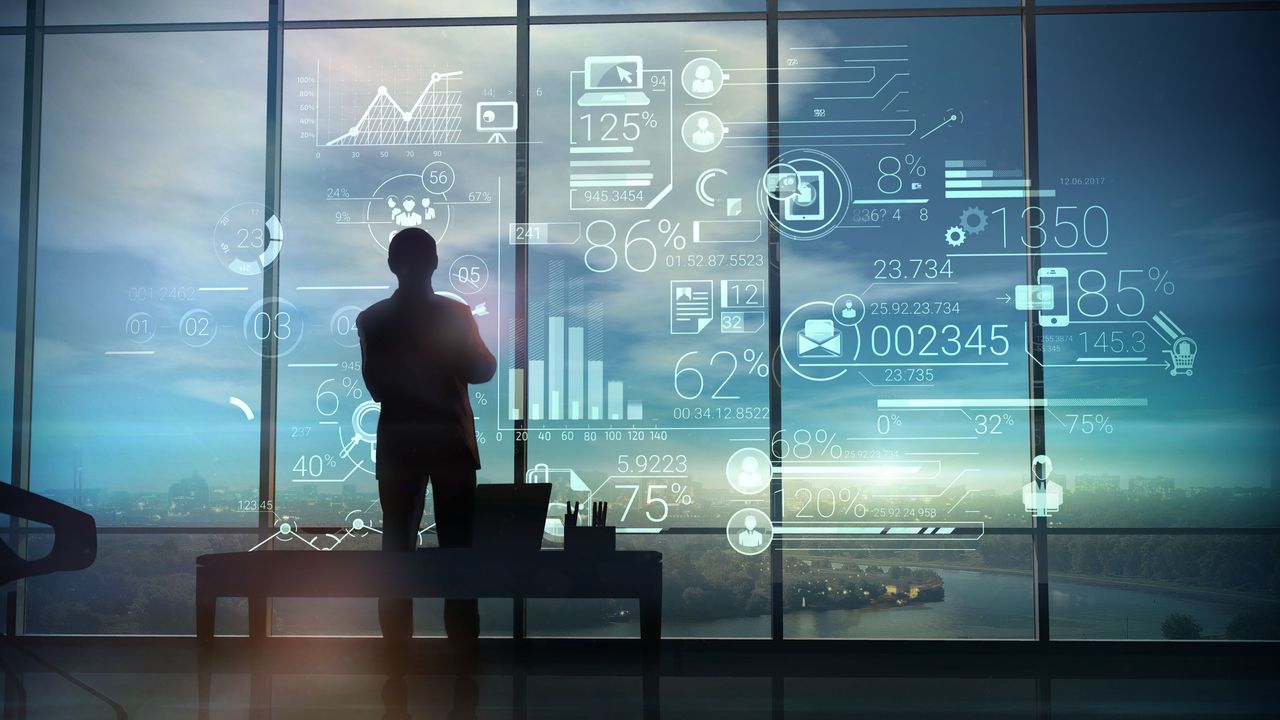 Accentuate the positive, they say. And why not, as we cruise into Monday with stocks pointing higher amid hopes for easing U.S. tariffs on China.

Granted, optimism is a tall order these days, with the U.S. economy slowing, COVID not done yet (let’s hope monkeypox passes fast) and Russian boots still on the ground in Ukraine. As the S&P 500 index (SPX) teeters perilously close to a bear market, investors remain understandably torn between buying the dip and selling the rip.

That doesn’t mean some aren’t giving calls for the bottom a shot.

Last week, we heard from technician Tom DeMark, who, after calling the COVID bottom in 2020, predicted a “shocking rally” was headed our way as inflationary drivers —-energy and commodities —- start to peak.

In that upbeat vein is our call of the day from the Stuck in the Middle blog’s Mr Blonde, who says oversold conditions are “leaving markets vulnerable to some good news.”

“A precise catalyst is not always easy to identify, but Mr. Blonde sees inflation momentum passing its worst, rate markets calming as the most hawkish Fed scenarios are being removed,” writes Mr Blonde.

He expects a relief rally to play out over the next four to six weeks, and on his risk scale (1 to 10 — the worst), it’s a move from 2 to 4 for him. “It reflects the view major equity indices can rally 10% to 12% and still be in a clear downtrend, so the risk/reward has shifted somewhat.”

Mr Blonde’s graph below summarizes 2-year rolling S&P 500 drawdowns, with 20% pullbacks not only not unheard of, but also possible outside of big economic downturns. In his view, equity markets have already met minimum criteria for a cyclical bear market, pricing in around 80% odds of a “normal” recession. 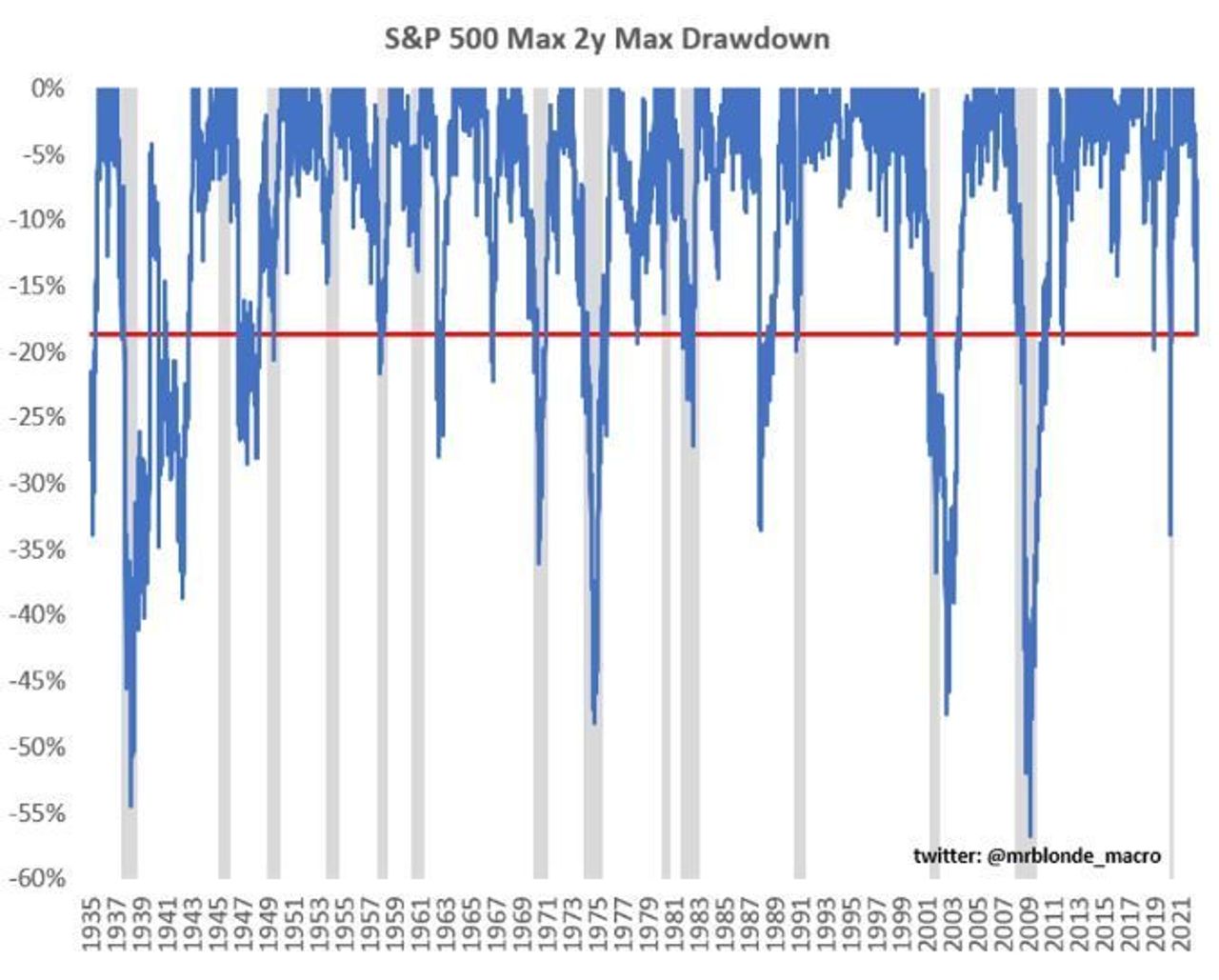 “Bottom line, meaningful damage already done and being more bearish today than 6 months ago is probably inappropriate even if the correction has further to go,” he said.

Elsewhere, he points to the Nasdaq Composite (COMP), ripe for relief as it’s fallen 20% over 7 straight weeks, has retraced 50% of its rally from the lows of March 2020, and its forward valuation has reverted to the pre-COVID average, among other factors.

Then there’s the abundance of “growling bear markets” stories in the media — a simple reflection of market sentiment. While reluctant to rely on any sentiment signals, he notes that over the last 30 years, similarly bearish attitudes have led to higher stock prices four to six weeks later.

His sentiment measure adds in surveys from Investors Intelligence and the American Association of Individual Investors, normalized over rolling two-year periods. And sure there are false-positive risks here , but “30-year historical probability of higher prices in 4-6 week are hard to fight,” he says. 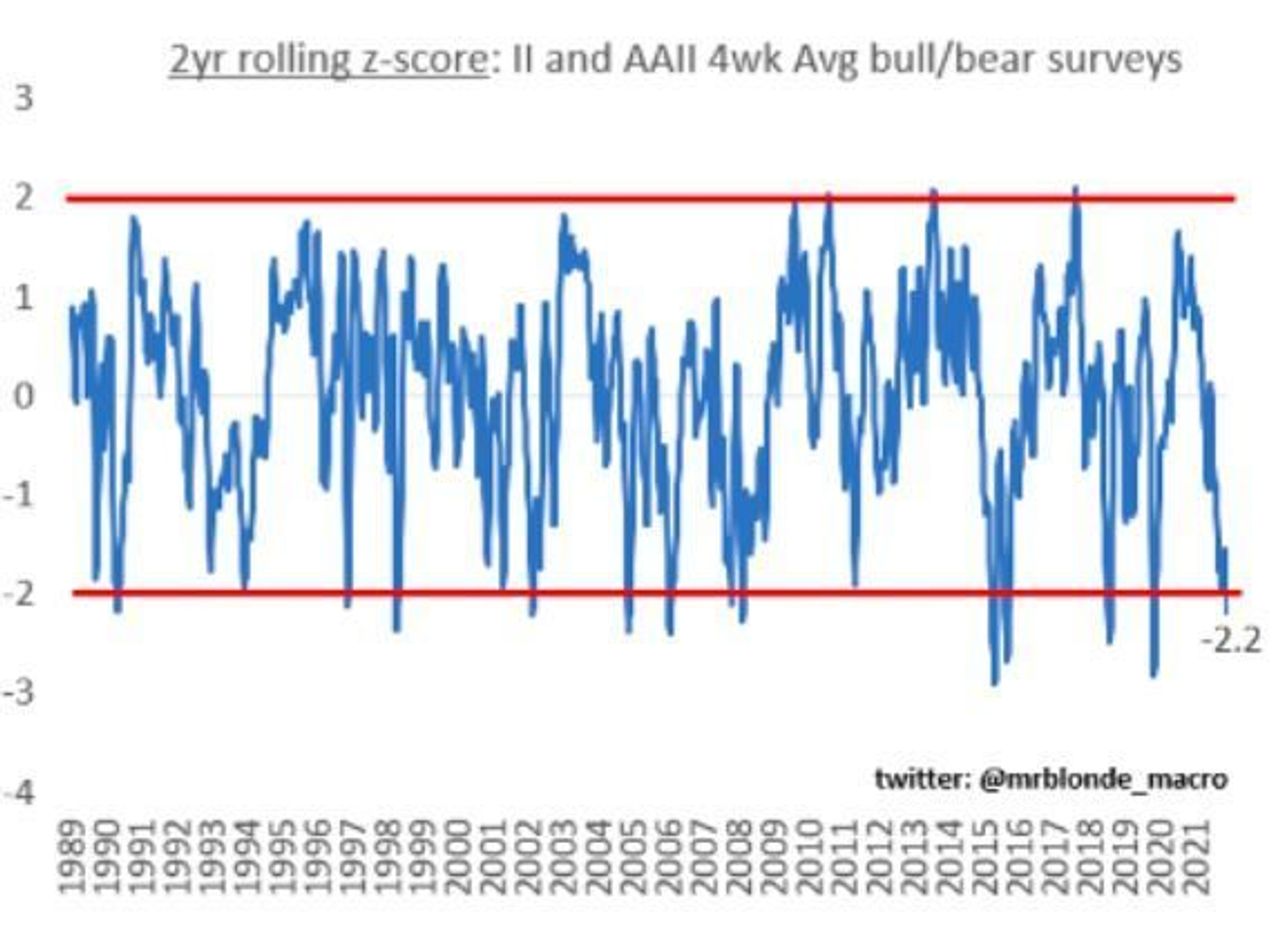 More evidence that a turning point is ahead: a recent Bank of America fund managers survey showing managers with the highest cash balances in 20 years, plus recent capitulation among retailer traders. Citing Goldman Sachs, Mr Blonde said they appear to have sold 50% of what they bought in 2020-2021.

Yet deep capitulation eludes, he says, noting that his own preferred measure still has not breached a negative 2.5%. Standing in the way are still-standing energy, utilities, insurance and staples, though the last sector just started selling last week. 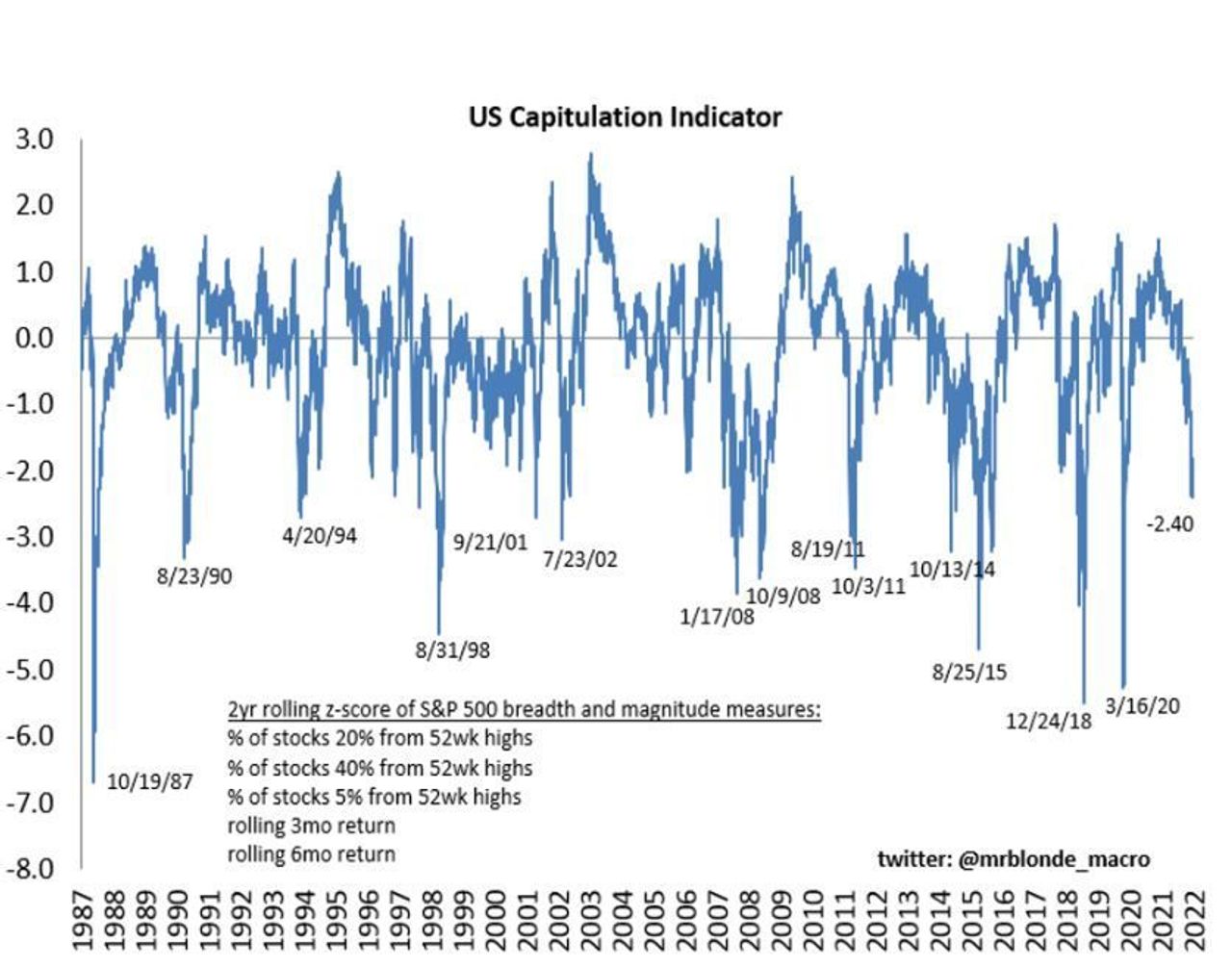 Overall, Mr Blonde believes that we are probably passing the worst of inflation momentum, “and if the market starts to believe this it can remove the more hawkish scenarios and act as a positive development.” Not making it easy is the fact that the Fed has “put all its policy chips on the most lagging indicator of them all,” inflation.

On his Asia tour, President Joe Biden said a U.S. recession was not inevitable, and said America would defend Taiwan in case of China aggression. Elsewhere, Russia has been pressing its offensive in eastern Ukraine.

U.S. officials are voicing caution over a monkeypox outbreak, with one U.S. case and several in Europe, with experts pointing to sex at two raves in Spain and Belgium,

After a two-year absence, the World Economic Forum in Davos, Switzerland is back, with plenty of urgent issues for the uber-rich to try to sort. Addressing the crowed (virtually of course), Ukraine President Vlodomir Zelenskyy was urging ‘maximum’ sanctions on Russia over the brutal invasion of his country.

Atlanta Fed President Raphael Bostic and Kansas City Fed President Esther George will both speak at events Monday. The U.S. data calendar is empty, but the week will bring us the minutes of the latest Fed meeting on Wednesday and its favorite inflation gauge on Friday. 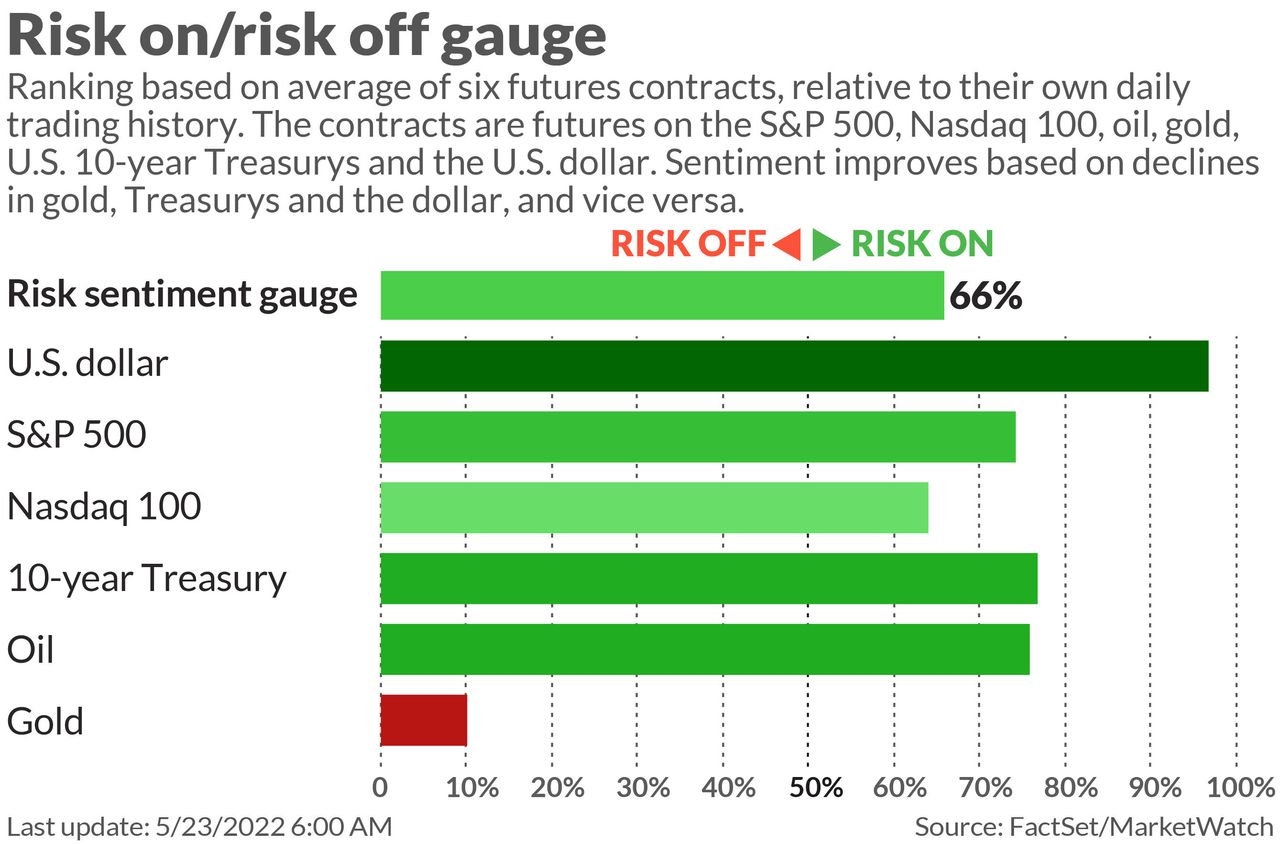 Stock futures (YM00)(ES00)(NQ00) are pushing higher, along with bond yields (BX:TMUBMUSD10Y)(BX:TMUBMUSD02Y), and oil prices (CL00) are also up. And with risk appetite higher, the dollar (DXY) is down across the board. Cryptocurrencies are stabilizing, and stablecoin Luna has gotten a boost as investors have been burning their coins.

A lackluster opening for the new Downton Abbey movie may be proof older women are still wary post COVID.

How a couple and their 19 dogs escaped a war-torn Ukraine city.