Need to Know: These two bitcoin bear market indicators may tell investors when cryptos will bounce back, says J.P. Morgan

Need to Know: These two bitcoin bear market indicators may tell investors when cryptos will bounce back, says J.P. Morgan 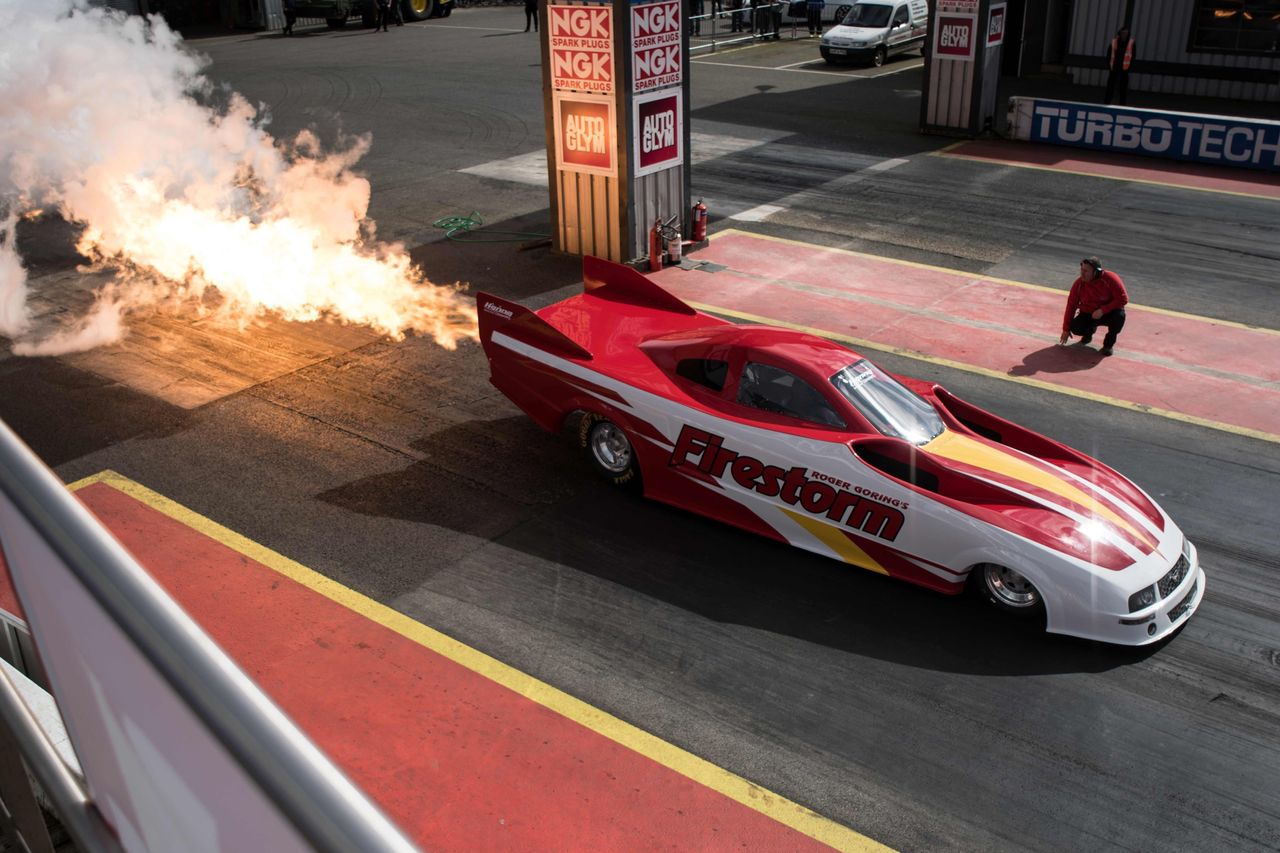 Bitcoin and other crypto assets have had a rough ride over the past month.

While the leading crypto got a boost on Wednesday after news that lawmakers in El Salvador voted to approve bitcoin as legal tender, its price remains nearly 40% below highs of around $60,000 from as recently as a month ago.

Our call of the day, from strategists led by Nikolaos Panigirtzoglou at investment bank J.P. Morgan, is that two key measures indicate that bitcoin (BTCUSD) is in a bear market—and they can also tell investors when it’s over.

The first red flag is that bitcoin futures have shifted into “backwardation” for the first time since 2018, the strategists said. Backwardation is when the current price of an asset is higher than the price trading in futures markets. Futures for the other leading crypto asset, ethereum (ETHUSD), have also approached that critical turning point into backwardation, as seen in the chart below. 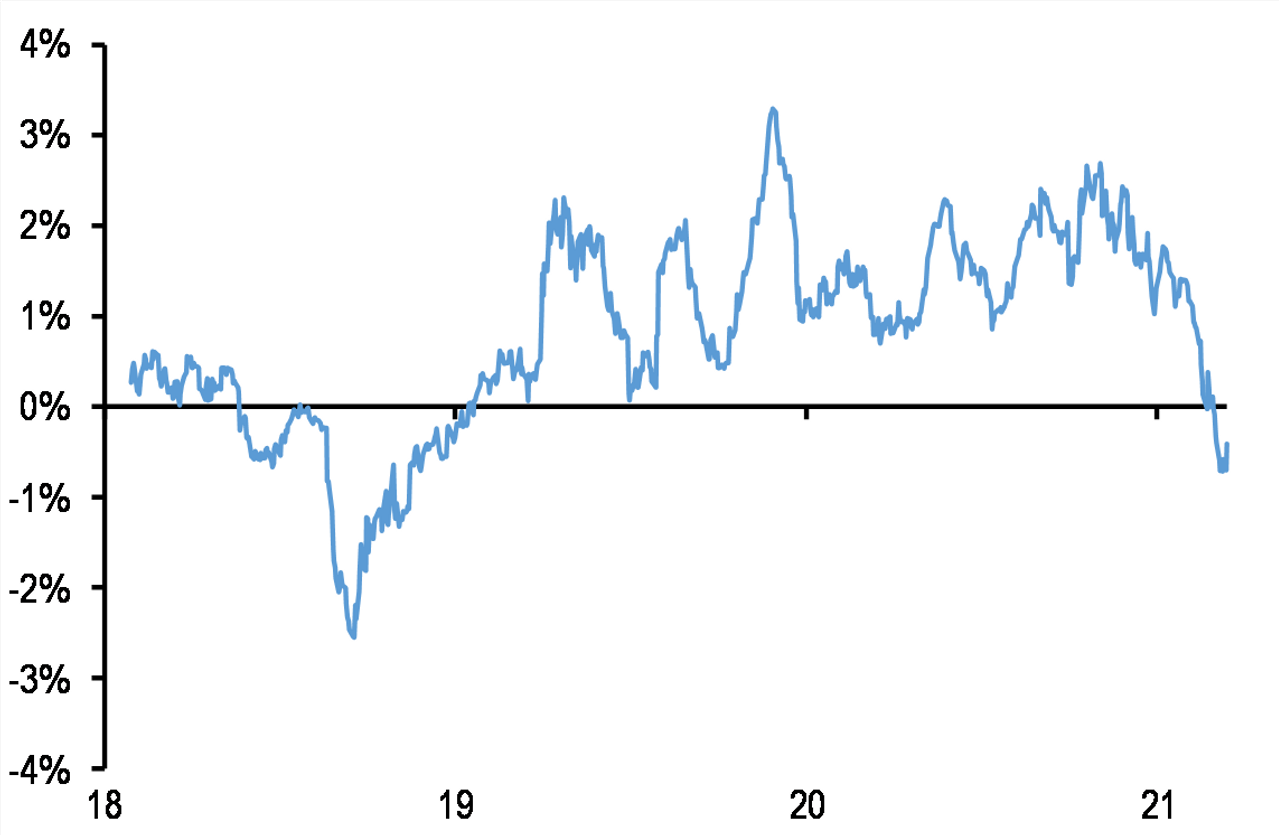 “This is an unusual development,” said the J.P. Morgan team. “And a reflection of how weak bitcoin demand is at the moment from institutional investors that tend to use regulated CME futures contracts to gain exposure to bitcoin.”

Normally, when demand for bitcoin futures isn’t weak, the futures trade at a higher price than the spot price—typically around a 10% futures to spot spread. However, when price expectations for bitcoin turn bearish, the futures curve slips backward, and this was the case for most of 2018, according to the strategists.

“We believe that the return to backwardation in recent weeks has been a negative signal pointing to a bear market,” said Panigirtzoglouand his team. “We are thus reluctant to abandon our negative outlook” on bitcoin, they said, until the 21-day rolling average of the 2nd CME bitcoin futures spread over spot shifts back into positive territory.

“We believe that the share of bitcoin in the total crypto market would have to normalize and perhaps rise above 50% (as in 2018) to be more comfortable in arguing that the current bear market is behind us,” said the J.P. Morgan team. 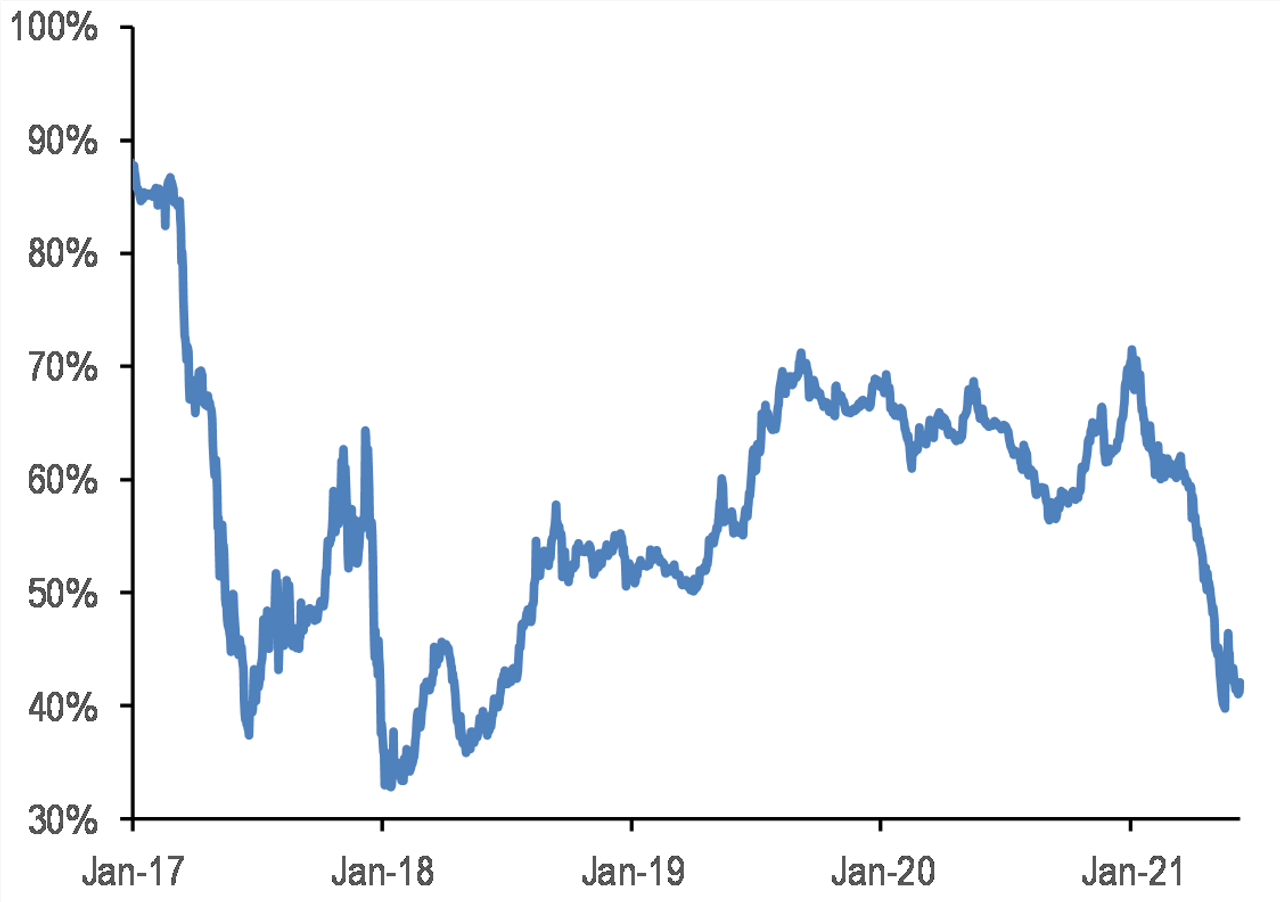 The U.S. business of JBS (BR:JBSS3)paid an $11 million ransom in bitcoin to cybercriminals who last week knocked out plants that process around 20% of the U.S. meat supply. The Brazilian food giant said the payment was made to protect against further disruption.

On the U.S. economic front, investors can expect initial jobless claims for last week at 8:30 a.m. Eastern, along with continuing jobless claims for the week of May 29, and the consumer price index—CPI—for May. Later, figures for business formations in May and household wealth in the first quarter of the year are due.

U.S. President Joe Biden and British Prime Minister Boris Johnson are set to ease transatlantic COVID-19 travel restrictions. With Biden in the U.K. for this week’s Group of Seven meeting, the two leaders are expected to announce a new task force with the goal of reopening U.S.-U.K. travel as soon as possible.

Company actions to address climate change have yet to have a critical aggregate effect, with none of the major stock market indexes on track to hit the widely-used target of keeping global warming below 2°C above pre-industrial levels, according to a report. In fact, the British FTSE 100 and American S&P 500 are on temperature pathways of 3°C or above.

European equities (XX:SXXP)(UK:UKX)(DX:DAX)(FR:PX1) are mixed but
mostly into the green, while stocks in Asia (JP:NIK)(HK:HSI)(CN:SHCOMP) finished the trading day largely higher. 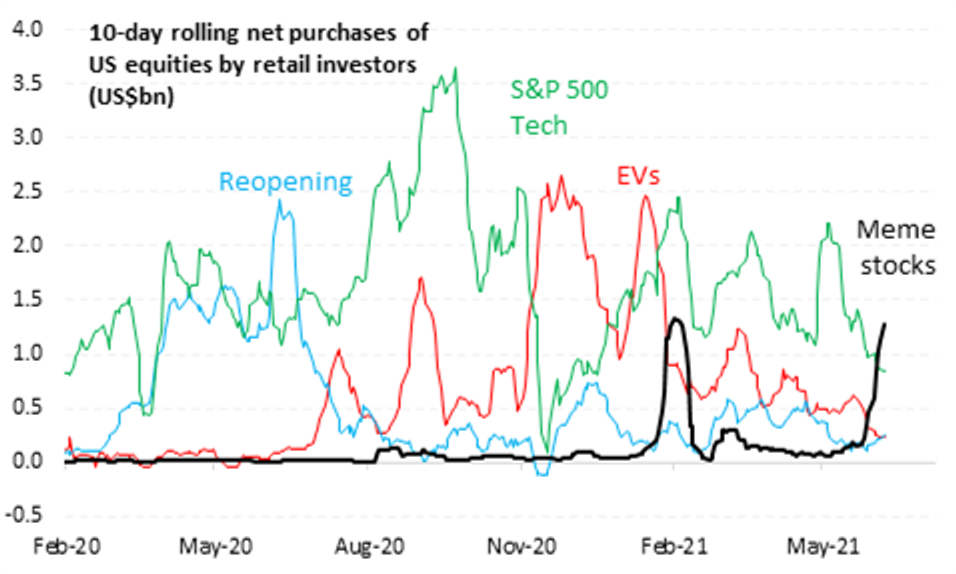 Chart from Vanda Track, via the Irrelevant Investor blog.

In case there was any doubt, the meme trade—epitomized by stocks like GameStop (GME), AMC (AMC), BlackBerry (BB), and Clover (CLOV)—is in full swing. Our chart of the day, from Vanda Track and courtesy of Michael Batnick at the Irrelevant Investor blog, shows the buying patterns of individual investors since February 2020.

“First, it was the reopening, then tech, then EVs, then meme stocks, then tech, and now meme stocks again,” Batnick said. “I expected trading to die down once the economy reopened and people started leaving their homes. I was wrong. This is here to stay.”

Farmers with renewable energy sources, like those run off cow manure, can make 10 times more money running crypto mining machines than from selling energy to providers.

“Baywatch” star David Hasselhoff is saving lives again, but not as a lifeguard. The actor has been recruited by German health authorities to encourage people to get vaccinated against COVID-19.

SpyGate : Bots were slow and small in size