Need to Know: Trump’s about to leave DC. That’s bad news for these stocks, strategist says

Trump’s about to leave DC. That’s bad news for these stocks, strategist says 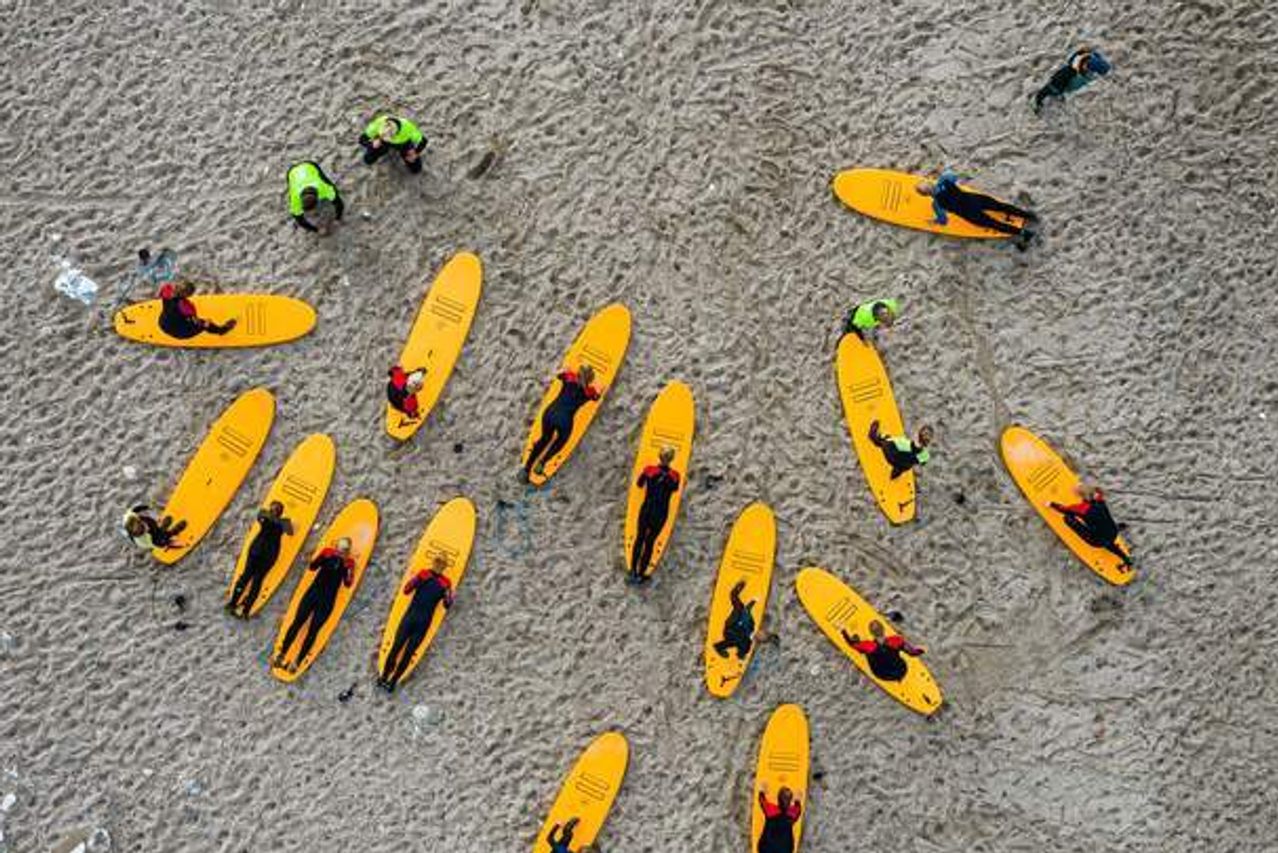 A modest recovery looks to be under way after Monday’s pullback, as hope springs eternal for fresh stimulus from President-elect Joe Biden’s administration. And why should the market stop doing what it has been doing for a long time now? Bounce back again and again.

But is there trouble in paradise? “The equity market’s ability to rally decisively in the face of the tragic events at the Capitol on 1/6, the virus’ escalation, a poor employment report and rising yields confirm that a new, more speculative, more volatile phase of the bull market has begun,” BTIG’s chief equity and derivatives strategist Julian Emanuel and equity strategy associate Michael Chu, tell clients in a note.

“Such a phase lasted 6+ months in 1999-2000, as the S&P 500 advanced a further 25%, with multiple 15% selloffs in between. The depth of any such pullbacks in 2021 is largely dependent on yields,” they say. And if yields keep rising, as they did Monday, then high-multiple growth names could be in trouble, they say.

They also provide our call of the day, and zero in on one sector they say investors might want to sidestep going forward.

Last month, they warned that communications and media stocks face risks from higher rates, increased regulatory scrutiny, and “a world fatigued by years of media overconsumption.”

Emanuel and Chu update those thoughts on Tuesday: “President Trump’s leaving office is bound to naturally diminish appetite for media, as will the reopening of the economy and the eventual return of travel and ‘away from screen’ leisure activities.” That and recent moves to restrict access to content providers and platforms by Alphabet GOOGL, Apple AAPL, Facebook FB and Twitter TWTR may only inspire politicians to seek more oversight on them.

Then there is also the matter of investors shifting toward value and away from growth stocks, which would lean on the communications sector.

Here’s their list of S&P 1500 communications services stocks that have outperformed their broader index since the end of 2019, but are set to move from “leaders to laggards as politicians pay more attention to media, while the rest of us pay less attention.” 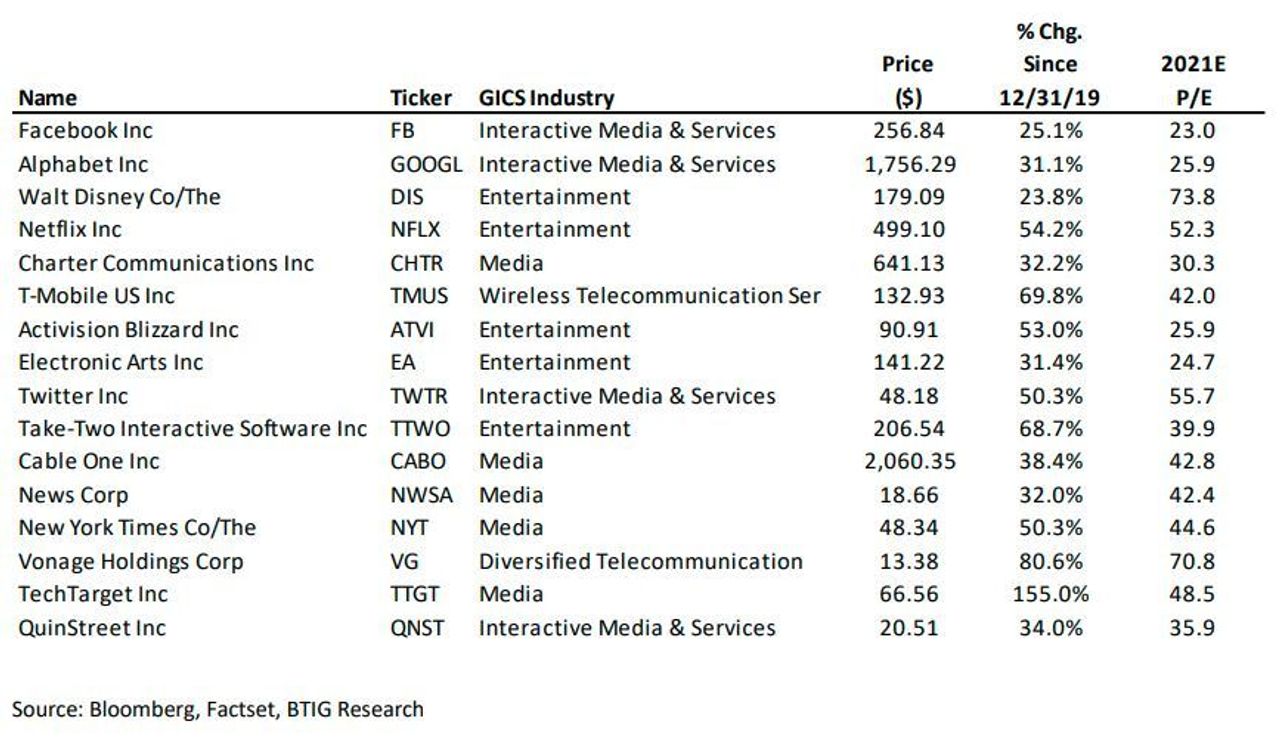 Among those stocks listed above are Facebook, Disney DIS, Netflix NFLX, the New York Times NYT, and the publisher of MarketWatch, which produces this report, News Corp. NWSANWS

Last word goes to Howard Marks, co-founder and co-chairman of Oaktree Capital Management. He explains at length in his latest newsletter how investors may be not be looking at that growth versus value stock strategy quite right.

“Some of today’s lofty valuations are probably more than justified by future prospects, while others are laughable — just as certain companies that carry low valuations can be facing imminent demise, while others are just momentarily impaired,” he says. Read more here.

Bitcoin BTCUSD volatility continues, with the cryptocurrency up 8% after tumbling between Sunday and Monday.

U.S. small-business sentiment sunk to a seven-month low in December. The Job Openings and Labor Turnover Survey results are also ahead.

German lender Deutsche Bank DB has reportedly halted dealings with President Donald Trump and New York’s Signature Bank SBNY is calling for his resignation, after it also said it would no longer do business with him after last week’s riots on Capitol Hill. Trump tried to blame those attacks last week on “Antifa people”, Axios reported, citing a tense phone call between him and House Minority Leader Kevin McCarthy, who responded that no, it was “MAGA. I know. I was there.”

Shares of Zoom Video ZM are down after the communications technology company said it is selling $1.5 billion in stock.

Some Democratic lawmakers say they have tested positive for COVID-19 while sheltering with colleagues who declined to wear face masks during last week’s Capitol Hill riots.

Retailer Walmart WMT will start its own financial technology company for customers and employees with a backer for investment platform Robinhood.

Here’s a look at how COVID-19 is progressing in the U.S., with deaths and cases off their peaks a bit.

I spy. Angelina Jolie is more than an actress?