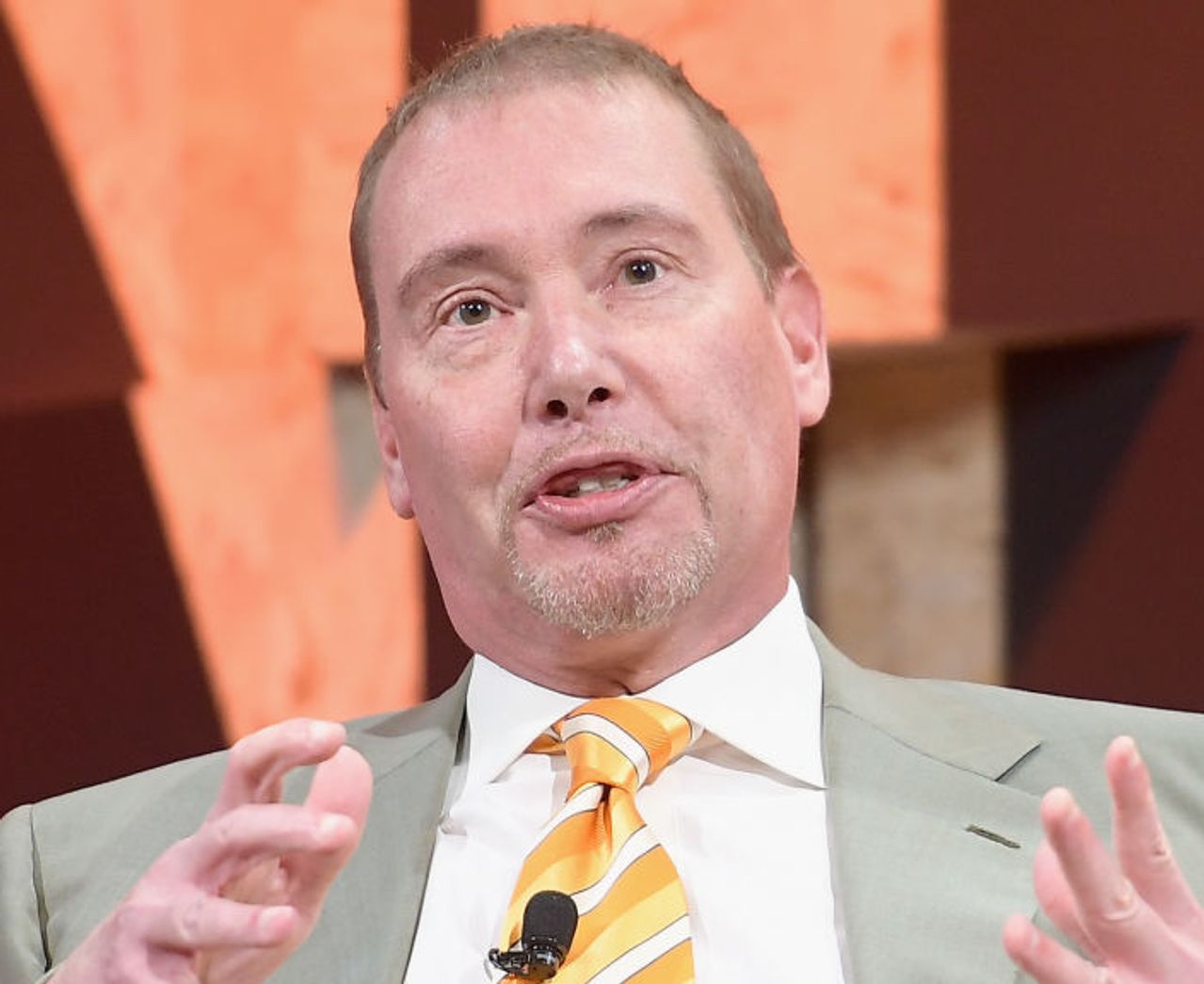 Are stocks ready to break away from that rocky start to 2022?

The S&P 500 (SPX) snapped a five-session losing streak on Tuesday, after Federal Reserve Chair Jerome Powell vowed the central bank will use its “tools” to get inflation under control without damaging the economy. And equity futures are rising, despite some big data that could show the fastest annual rise in consumer prices since 1982.

A rebound with teeth to it may not quite be here yet, say some. “Bounces from oversold levels tend to be hard and fast, and yesterday’s 150-point intraday reversal definitely counts as hard and fast,” noted Jani Ziedins, of the CrackedMarket blog. “That said, more often than not, the third bounce is the real deal, meaning we could see a couple tests of the lows before this is all said and done.” 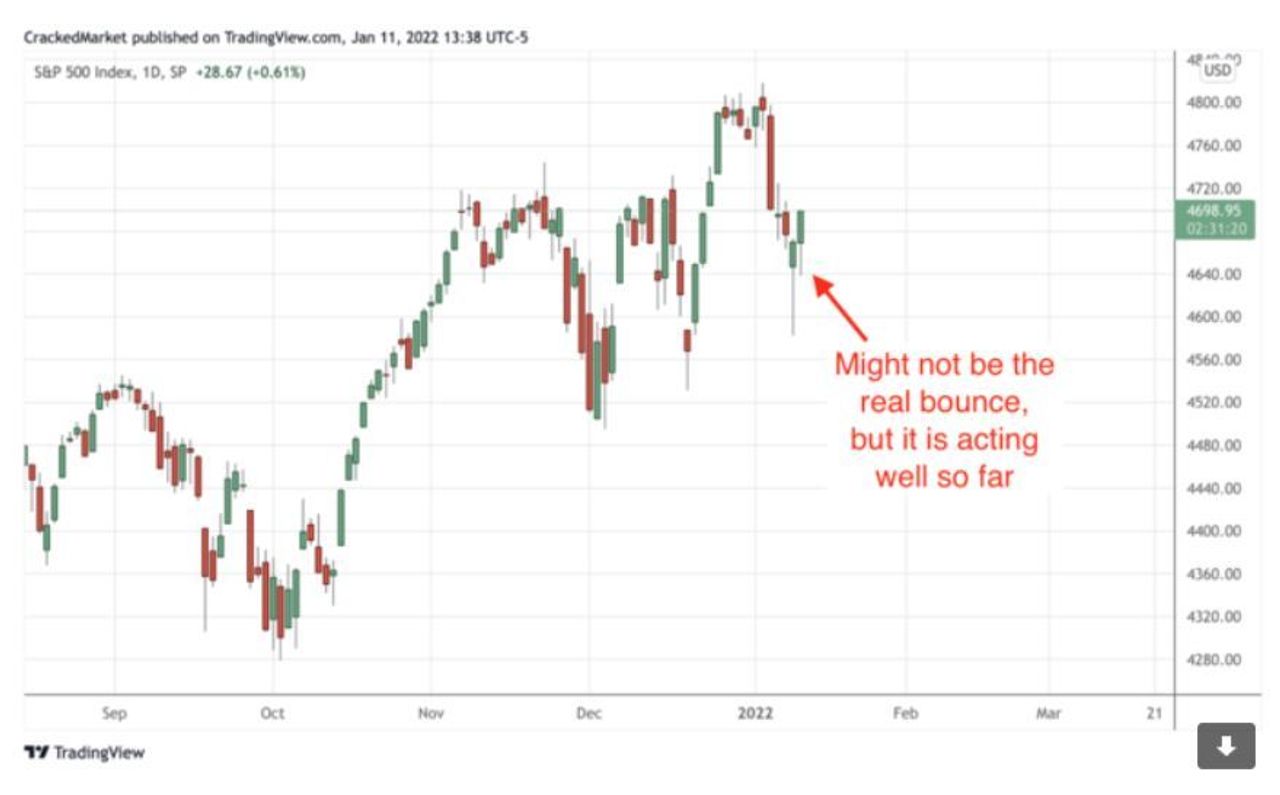 On to our call of the day from so-called bond king DoubleLine CEO Jeffrey Gundlach, who unveiled his predictions for the year ahead. And he sees headwinds for a stock market that has been “supported by QE [quantitative easing]” and now faces Fed tapering, with Powell sounding “more hawkish” every time he speaks.

“Today [Tuesday] sounds like Jay Powell repeating the 2018 formula: end QE and raise official short-term interest rates,” Gundlach said in a webcast to clients that was live tweeted late Tuesday. He said that he’s not “predicting a recession yet,” but sees those pressures building.

He said the yield curve had seen “pretty powerful flattening,” and was “approaching the point where it signals economic weakening. At this stage, the yield curve is no longer sending a ‘don’t worry be happy’ signal. It is sending a ‘pay attention’ signal, he said.

Gundlach highlighted a chart that showed consumer sentiment “free-falling,” which “looks somewhat recessionary.” He said surging car prices could be one culprit as prices have climbed so much “people don’t think this is a good time to buy a car if they can find one.” That surge in prices has even made it possible to make money by flipping and selling, he said. 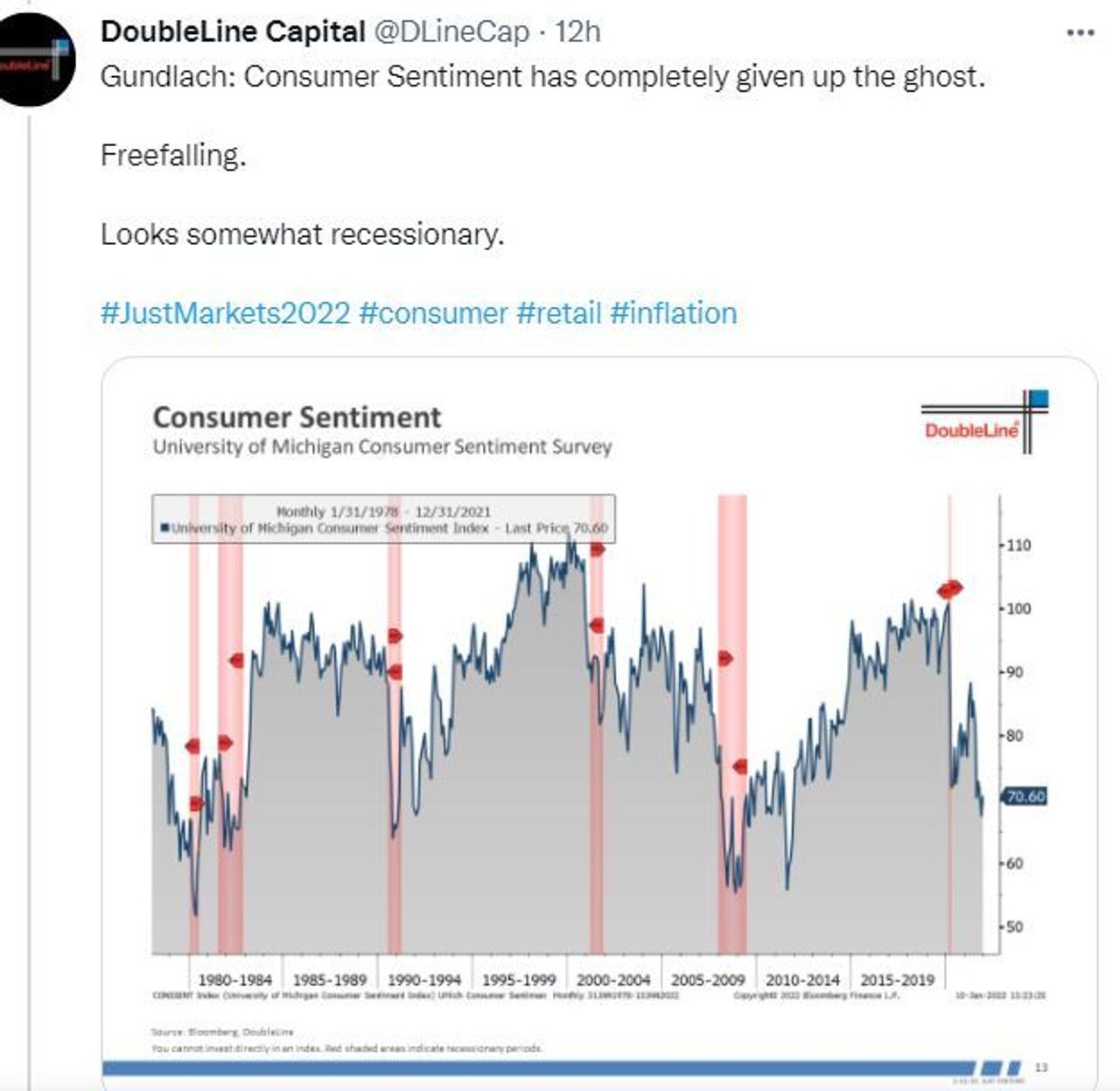 The money manager said the housing market is being boosted by low supplies and should stay supported provided mortgage rates are low. He is neutral on gold and sees the dollar continuing to weaken.

U.S. stocks are expensive versus just about everywhere else, Gundlach said, as he pointed out that European markets, a favorite of his in 2021, were looking good again for 2022. 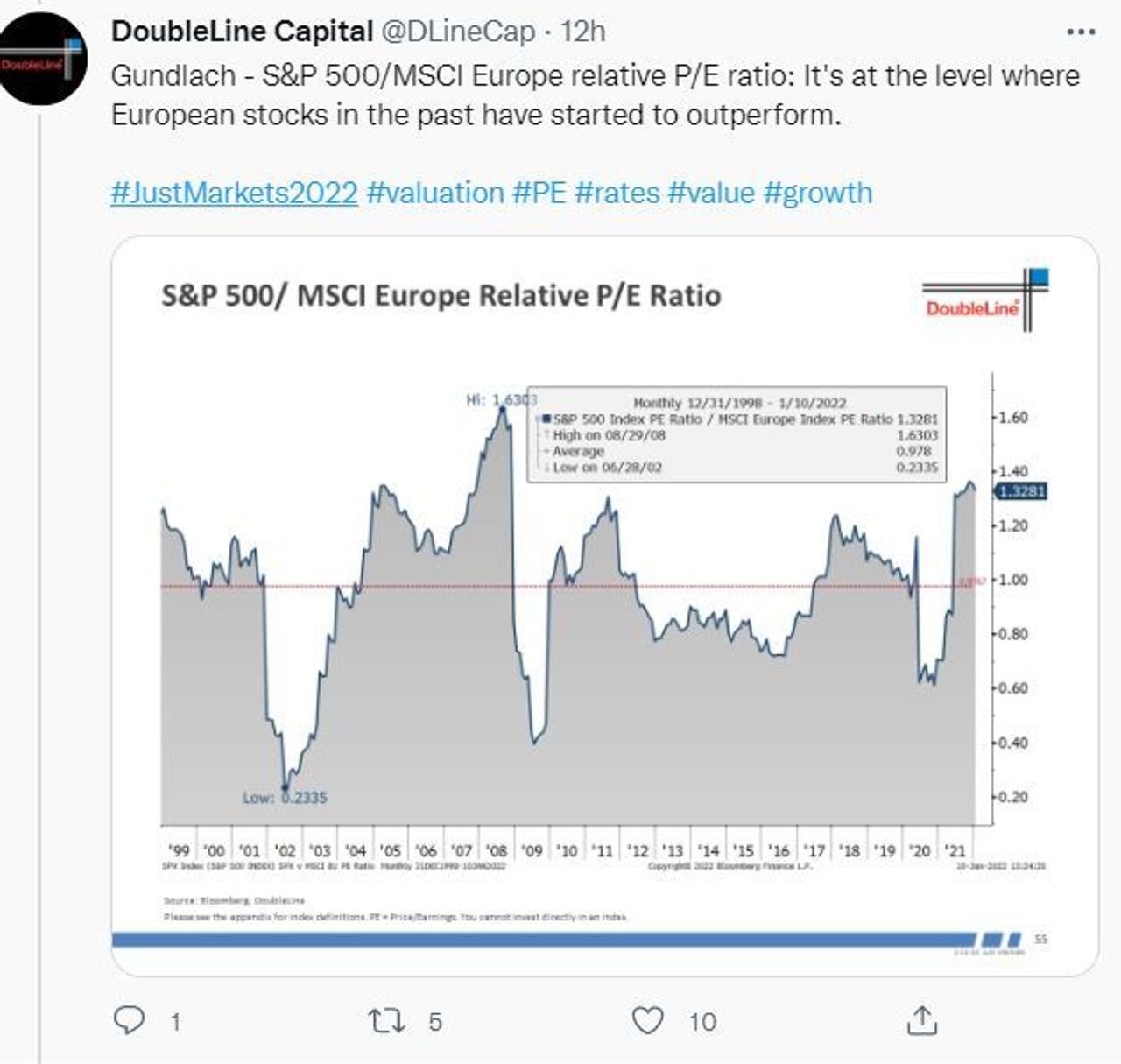 Looking back on Gundlach’s 2021 forecast, the manager advised a “winning” formula of half cash and Treasury bonds, 25% in equities, mostly emerging markets and Asia, and 25% in real assets such as gold or property to hedge against higher inflation. He expected U.S. equities would lag behind the rest of the globe, alongside rising inflation and volatility.

The iShares MSCI Emerging Markets ETF (EEM) lost 5% in 2021, versus a 27% rally for the SPDR S&P 500 ETF trust (SPY), a popular exchange-traded fund that tracks the index. Real estate indeed proved a savvy investment spot, though gold dropped 3% in 2021, and Treasury bonds had a dismal year.

Apart from December consumer prices — expected to rise 7% on an annual basis and 0.5% on the month — the Federal budget and the Fed’s Beige Book are due later.

The European Medicines Agency has warned too many COVID-19 boosters could end up harming immune systems, echoing comments from the World Health Organization. Meanwhile, the omicron coronavirus variant may peaking in the U.K., offering hope for the U.S. and elsewhere. And the White House is getting ready to ship millions of COVID-19 tests to public schools.

Biogen (BIIB) share are down 9% on news Medicare will limit coverage of the biotech’s controversial and expensive Alzheimer’s drug Aduhelm and future others like it.

Shares of Immuron (IMRN)are soaring, after the Australia-based biopharmaceutical company received $4.5 million from the U.S. Defense Dept to evaluate a key drug for military use.

A 19-year-old German teen said he managed to hack into 13 Tesla (TSLA) autos around the world via a software flaw that let him start the cars, unlock doors and windows and disable security systems.

And a reminder that Friday will mark the start of earnings season kickoff, with banks — including Citigroup (C), JPMorgan (JPM), Wells Fargo (WFC) and BlackRock (BLK) — due to report. (See preview.) 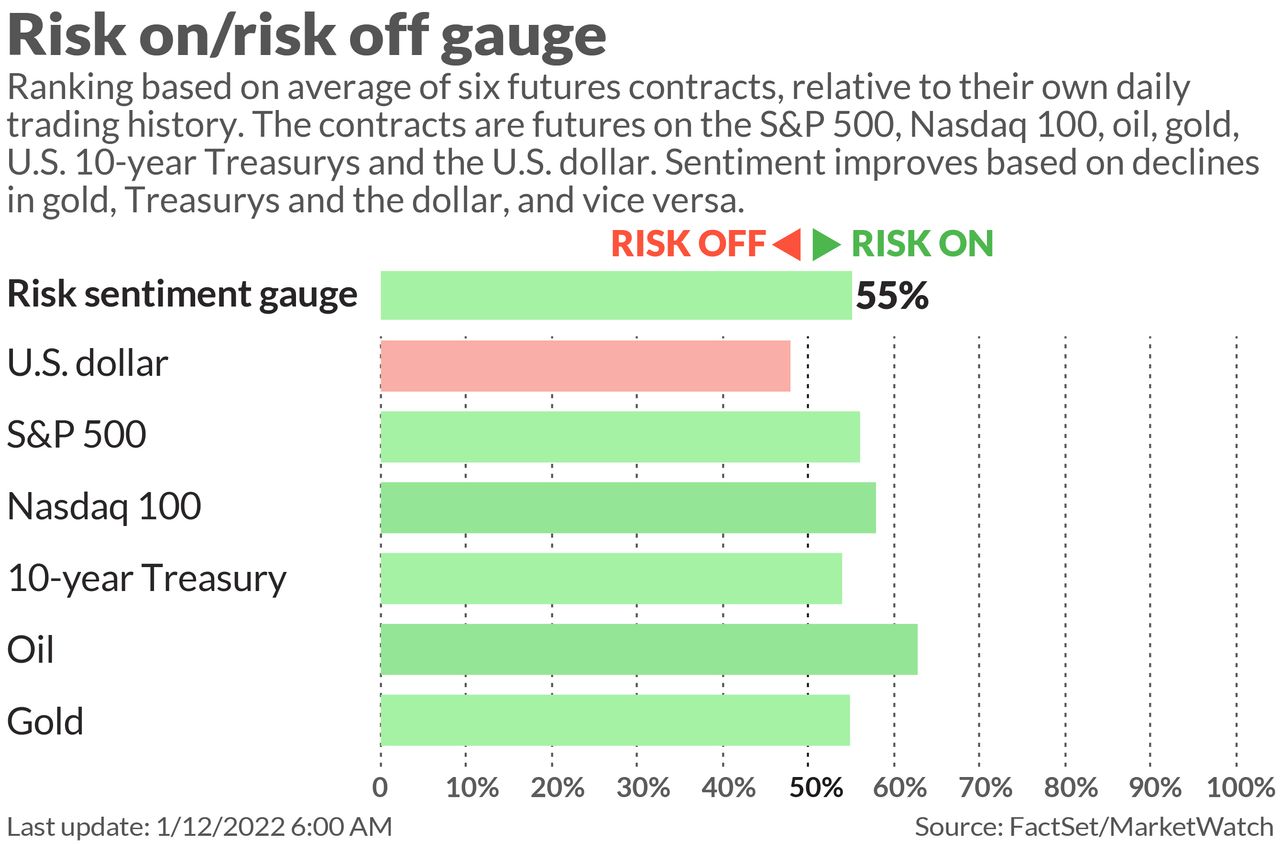 Where does a rise in real yields start to hurt stock investors? A team of strategists at UBS, led by Bhanu Baweja, said when yields rise more than 40 basis points over three months, “the impact on the market becomes material and goes nonlinear.” 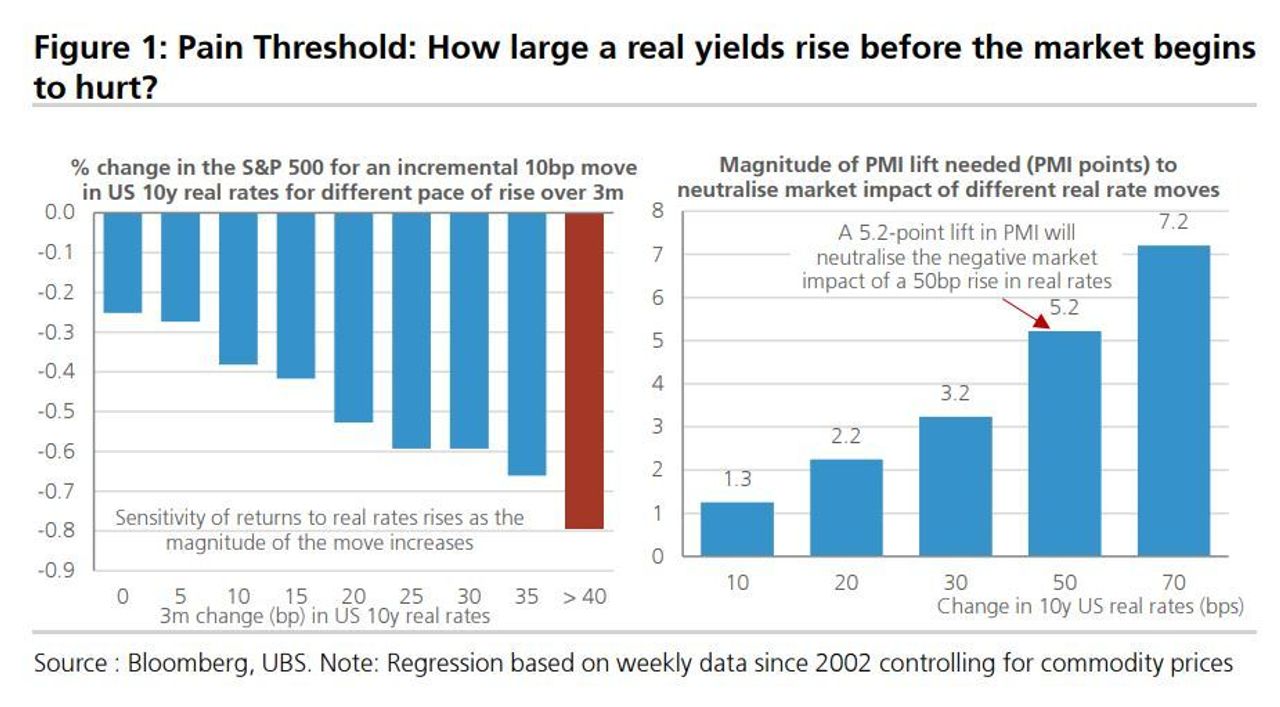 “This is the range we regard as the rough threshold of real-rate painfor the market. An incremental 10bp rise in real yields from here causesthe market to drop by about 0.8%, ceteris paribus. But what if otherthings are not equal? A 5.2-point rise in PMIs will negate the hit to themarket from a 50bp rise in real yields,” said the strategists in a note to clients.

Here are the most active stock-market tickers on MarketWatch, as of 6 a.m. Eastern

Goldfish learns to drive, thanks to robots.