The Census Bureau reports New Home Sales in July were at a seasonally adjusted annual rate (SAAR) of 901 thousand.

The previous three months were revised up, combined.

Sales of new single-family houses in July 2020 were at a seasonally adjusted annual rate of 901,000, according to estimates released jointly today by the U.S. Census Bureau and the Department of Housing and Urban Development. This is 13.9 percent above the revised June rate of 791,000 and is 36.3 percent above the July 2019 estimate of 661,000.
emphasis added 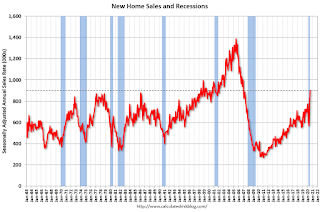 The first graph shows New Home Sales vs. recessions since 1963. The dashed line is the current sales rate.

This is the highest sales rate since 2007. 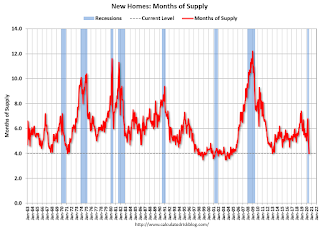 The months of supply decreased in July to 4.0 months from 5.5 months in June.

This is in the normal range (less than 6 months supply is normal).

“The seasonally-adjusted estimate of new houses for sale at the end of July was 299,000. This represents a supply of 4.0 months at the current sales rate.” 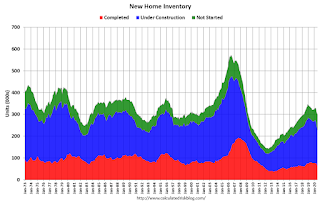 On inventory, according to the Census Bureau:

“A house is considered for sale when a permit to build has been issued in permit-issuing places or work has begun on the footings or foundation in nonpermit areas and a sales contract has not been signed nor a deposit accepted.”

Starting in 1973 the Census Bureau broke this down into three categories: Not Started, Under Construction, and Completed.

The third graph shows the three categories of inventory starting in 1973.

The inventory of completed homes for sale is still somewhat low, and the combined total of completed and under construction is close to normal. 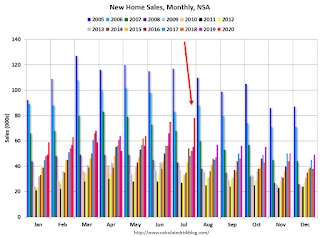 This was above expectations of 786 thousand sales SAAR, and sales in the three previous months were revised up, combined. I’ll have more later today.

5 Things to Know for Today

OP: Your FED is lifting us higher

OP: Your FED is lifting us higher