S&P’s this morning        High 322.65 Low 322.02 Change higher by 0.16%.
Tokyo -370.96  Hong Kong -234.14    London +0.93 Germany +42,63
S&P Futures are trading higher this morning. Futures have flipped from down 0.15% to up 0.16% this morning. Iran’s retaliation attempt was clearly design to be symbolic in nature as zero casualties have been reported. Asian stocks closed lower overnight due to the heightened geopolitical tensions in the Middle East. Japanese stocks ended sharply lower and the yen turned volatile after Iranian forces launched a barrage of more than a 35 ballistic missiles against two Iraqi military bases that house American and coalition forces. The Nikkei index briefly fell over 600 points to below the 23,000 line for the first time since November before recovering some lost ground to end the session down 370.96 points, or 1.57 percent. The Shanghai Composite index fell 37.91 points. European stocks have reversed direction this morning. Earlier today the European markets were lower with the German DAX, France’s CAC 40 index and the U.K.’s FTSE 100 were down between 0.4 percent and 0.6 percent. These markets have turned and are now trading higher and the DAX is now higher by 0.27%.

OIL PRICES:
Oil prices are trading higher this morning. WTI futures touch the $65.85 level hours after Tehran fired an estimated 35 ballistic missiles from Iranian territory against at least two Iraqi military bases hosting U.S.-led coalition personnel. At this time there have been no casualties reported. President Trump tweeted  “All is well! Missiles launched from Iran at two military bases located in Iraq. Assessment of casualties & damage taking place now. So far, so good! We have the most powerful and well-equipped military anywhere in the world by far! I will be making a statement tomorrow morning.” The American Petroleum Institute reports inventories of crude oil
in the US fell by a sizable 5.9M barrels in the latest week. Later this morning, the official inventories figures will be released from the Department of Energy.
WTI is at $62.25 a barrel, Brent Crude is at $68.06 a barrel.
For news on oil type in .OIL or “OPEC” into NewsWare

Economic:
Major central banks are going to find difficult to combat an economic downturn as they are running out of monetary policy tools, Bank of England Governor Mark Carney said in an interview with the Financial Times. “It’s generally true that there’s much less ammunition for all the major central banks than they previously had and I’m of the opinion that this situation will persist for some time,” the outgoing governor warmed. The euro is falling against the dollar as German manufacturing orders unexpectedly fell 1.3% in November, signaling that the downturn in the country’s industrial sector continues. The U.S. trade deficit narrowed in November for the third straight month, dropping to its lowest level in three years as the rate of imports dropped and exports picked up.  Traders in the futures market are beginning to embrace the Federal Reserve’s proposed replacement for the troubled London interbank offered rate. The Federal Reserve Bank of New York added nearly $100 billion in short-term liquidity to financial markets.
Economic Reports:
At 08:15 am ET ADP Employment Report.
At 10:30 am ET The EIA oil stockpiles report
At 10:00 am ET Factory Orders & the ISM non manufacturing Index.
Fed Speak:
At 10:00 am ET  Federal Reserve Governor  Lael Brainard
To access Economic news type  .Economic into NewsWare.
Options Activity:
Bullish option activity in   BYND, MU & RH
Bearish option activity in  AEO, CSIQ & SIG
To access news related to options type .OPTIONS into NewsWare
Sector Update: Headlines to Note-
Retail:
WBA      .ERN   Trading lower by 4% after earning miss. Affirms 2020 guidance.
M         P/SGN   Announced plans to close more than a dozen stores early this year.
KSS        .REC   Cowen lowers its price target to $53 from $56.
FDA/Drug Makers:
VSTM    P/SGN   Announced licensing agreement with Chugai Pharma
AVXL   P/SGN     Receive U.S. Patent for its neurodegenerative treatment.
MBOT  P/SGN    Receives intention to grant from EU Patent Office covering its self-cleaning shunt
DOW 30:
BA        P/SGN   Down 1.76% this morning due to another BA aircraft crash.
MSFT      .MA     Morgan Stanley lifts its price target to $189 from $157.
IBM      P/SGN    Announced the expansion of IBM Q Network, which now includes over 100 organizations
Rumors:
SPY     P/SGN     President Trump to make an announcement this morning on the Iranian tensions.
BBBY     .ERN     To release earnings this afternoon. A move of $2.15 is expected.
LNN      .ERN     To release earnings tomorrow morning. A move of $7.25 is expected.
Upcoming Earnings and yesterdays near term option volumes 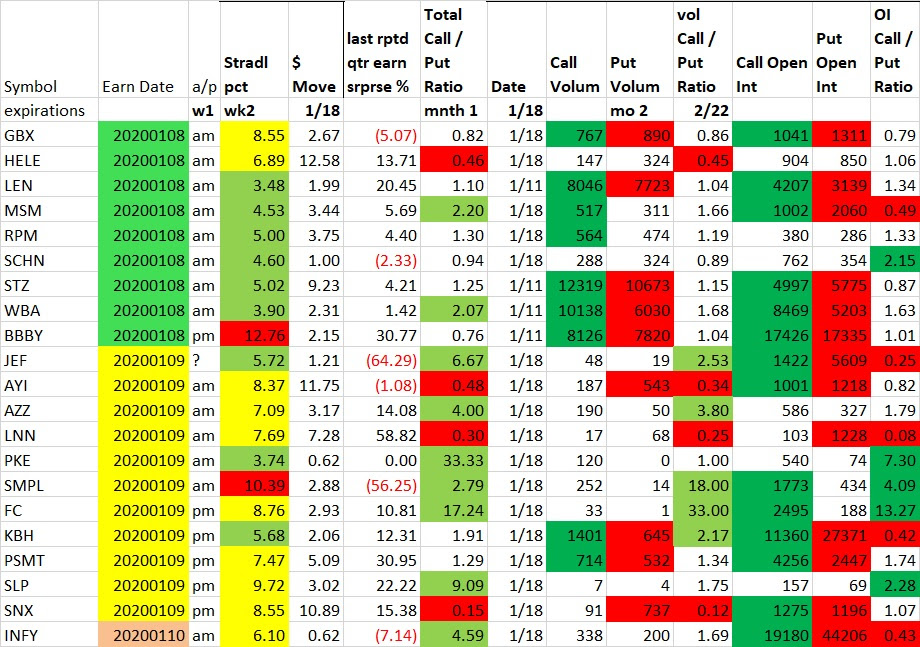 OP: S&P Charges Higher, But Don’t Rule Out a Pullback