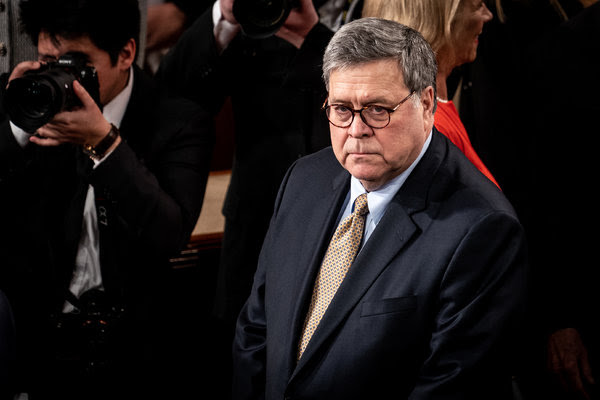 “I cannot do my job here at the department with a constant background commentary that undercuts me,” Attorney General William Barr said on Thursday.  Erin Schaff/The New York Times

Attorney General William Barr said in an interview on Thursday that President Trump’s attacks on the Justice Department had made it “impossible for me to do my job,” adding, “I’m not going to be bullied or influenced by anybody.”
Mr. Trump has repeatedly criticized officials in the department and denounced a sentencing recommendation for his associate Roger Stone. Here’s a transcript of excerpts from Mr. Barr’s interview with ABC News.
Mr. Trump did not immediately respond on Twitter, but his press secretary, Stephanie Grisham, said, “The president wasn’t bothered by the comments at all.” The attorney general had let the president know some of what he planned to say and is remaining in his job, a person familiar with the events told The Times.
Another angle: Critics of Mr. Barr dismissed his comments as mainly a way to deflect responsibility for carrying out Mr. Trump’s political wishes. “The tell here will be Trump’s reaction,” said Joe Lockhart, a White House press secretary under former President Bill Clinton. “If he doesn’t lash out, we’ll all know this was pure political theater.”
(Visited 21 times, 1 visits today)