Does this mean Dan Andrews can let go of the North Face jacket?

Australian unemployment rate has fallen from 6.3% to 5.8%.

What does this mean for QE?

The ASX 200 fell for a second session, dropping 0.7% to 6745.9.  The major banks and miners fell, while it was a weak day for CSL, Wesfarmers, Woolworths, Transurban, ResMed and Afterpay.
The S&P 500 and Dow Jones had closed at record highs after the US central bank predicted a fast economic recovery from the pandemic, and said it would keep interest rates at close to zero until 2024.
US futures were pointing to a mixed session on Wall Street tonight.
Australia’s unemployment rate fell from 6.3% to 5.8% in February, with seasonally adjusted employment increasing by a better-than-expected 89,000 people.
Some analysts said this has raised concerns the RBA’s case for further monetary easing has been weakened.
Qantas has told around 7500 workers from its mothballed international division they will receive $500 a week as part of the federal government’s $1.2 billion aviation support package.
Source: SMH 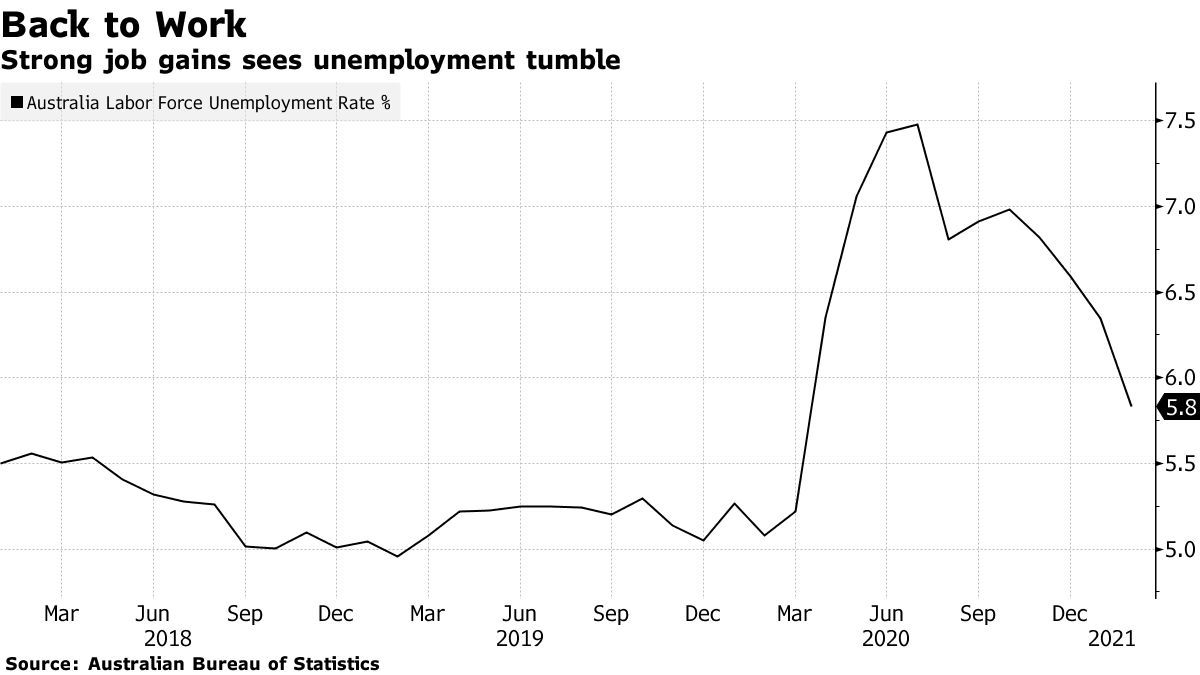 The latest intercepts come from a recently-completed expansion aircore drilling program at the Morning Bill prospect and from wide-spaced reconnaissance drilling on a host of regional targets elsewhere on the Glenlyle tenement.

The targets were selected due to the presence of geophysical signatures similar to Morning Bill or the nearby Cayley Lode discovery, where Stavely Minerals (ASX: SVY) encountered “exceptional” copper, gold and silver grades in late 2019 nearby to its Thursdays Gossan deposit.

Indian benchmark indexes have fallen every day this week and they closed 1% lower on Wednesday, as a fresh surge in domestic COVID-19 cases and rising U.S. bond yields hurt risk appetite.

The country reported its highest rise in daily COVID-19 cases in more than three months on Thursday.

The trustee for Peak Asset Management Unit Trust (“Peak”) is a corporate authorised representative (#1249050) of Equity Underwriters Pty Ltd (AFSL #244040).Peak accepts no responsibility for any views expressed and marketing material contained in this email except where the message specifically states otherwise and the sender is authorised to state them to be the views of Peak. Information provided in this email is general advise only and does take account your objectives, financial situation or needs.  Before acting on any advice in this email, Peak recommends that you consider whether it is appropriate for your circumstances.  If this email contains reference to any financial products, you should obtain the current Product Disclosure Statement (PDS) or other disclosure documents for the particular products and consider this information before making any decisions regarding the products. The Financial Services Guide (FSG) can be found at www.peakassetmanagement.com.au  or by telephoning Peak on 1300 304 460
Tags: austrailia
Previous Post