Yesterday we spoke with ASX:CLB’s James Baillieu and Keith Cohn who are looking forward to the quarterly report, which should be out before months end.

It seems that their strategy to go online and focus on the B2B business is paying off and we hope that this also translate to a higher stock price.

Also for us in Nico-Lab, we should hear from the company shortly.

Just take a look at 4DX ($650M market cap, with less than $1M revenues) and EMV ($190M market cap, nil revenues), to indicate how well the medtech space is tracking.

Last night, stocks fell on speculation that recent gains have outpaced prospects for a quick end to the stalemate over fresh economic stimulus. Treasuries and the dollar climbed.

Prospects for U.S. fiscal stimulus before Election Day dimmed on Tuesday, with House Speaker Nancy Pelosi demanding the Trump administration revamp its latest offer and Senate Republican leader Mitch McConnell pushing a smaller-scale strategy that she quickly rejected. His proposal to vote next week on just one provision appeared to stoke opposition even from President Donald Trump, who tweeted “Go big or go home!!”

“It’s been a rollercoaster ride in terms of communication from both sides,” said Mark Heppenstall, chief investment officer at Penn Mutual Asset Management. “There are still going to be significant pockets of stress in the economy,” and a fiscal package could help bridge the gap until we do get a vaccine, he added.

The SPI is down 50 points this morning. 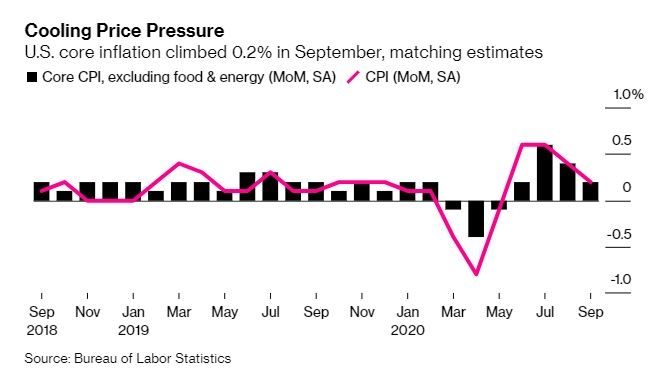 Closely watched biotech Mesoblast (ASX:MSB) says that over 150 severely ill COVID-19 patients on ventilators have been enrolled in a study of its stem cell treatment, remestemcel-L.

That’s over half of the 300 patients needed for phase 3 trial to see if Mesoblast’s inflammation-fighting treatment cuts death rates in the severely ill COVID-19 patients.

A pilot study involving just a dozen COVID-19 patients on ventilators being treated at New York’s Mt Sinai Hospital in March and April suggested the intravenous transfusion worked wonders, with nine of the 12 patients suffering from acute respiratory distress syndrome (ARDS) being discharged from the hospital in an average of just 10 days.

“There is an urgent need for targeted treatments to reduce the continued high mortality in COVID-19 ARDS patients who are dependent on mechanical ventilators,” Mesoblast chief medical officer Dr Fred Grossman said.

“We expect to complete the enrolment target in this important trial by the end of the year as the enrolment rate continues to increase in line with the surge in new infections across the United States.”