It will be a big week next week with CLB, TYM, BCC, ICI and WNB among others releasing their quarterly updates!

For those in Nico-Lab, we will be meeting with Paul Lappin, chairman, for a beach walk on Saturday morning to give you some more insights, following the great update released yesterday!

Weakness in the USD has also seen a resurgence in base metals overnight with Gold, Silver, Platinum and Copper moving up nicely

As there will be a public holiday in Victoria tomorrow, there won’t be a morning or arvo wrap, so we will see you Monday!

The S&P 500 Index closed lower after an up-and-down session that saw the index whipsawed by takes on the progress toward a deal. House Speaker Nancy Pelosi continued talks with White House representatives even as the odds remained long for a deal that could pass in the Senate. Small caps lagged behind.

“You look at the trading today and it’s almost like watching a cat with a laser pointer,” Mark Hackett, chief of investment research at Nationwide, said by phone. “Pelosi comes out midday and says she’s excited about the deal, and then two minutes later says she doesn’t think a deal will get done, and the market’s reacting. Investors are fixated on the shiny object, which is the stimulus deal.”

Energy producers were among the worst performers as oil fell toward $40 a barrel in New York. Social media firms fared better after Snap Inc. reported strong earnings, with Twitter Inc. and Facebook Inc. both up more than 5% at one point.

Of the 84 companies in the gauge that have reported earnings this season, only 10 have missed analyst profit forecasts. Tesla Inc. rose ahead of financial results later Wednesday. Netflix Inc. sank the most since March after subscribers fell short of predictions. A surge in copper lifted materials producers.

The U.S. 10-year yield broke above 0.8% to the highest since June and European yields also rose after Democratic House Speaker Nancy Pelosi expressed hope for political compromise on a bill this week. Rates came back from their peak as negotiations dragged on Wednesday.

The SPI is down 49 points this morning. 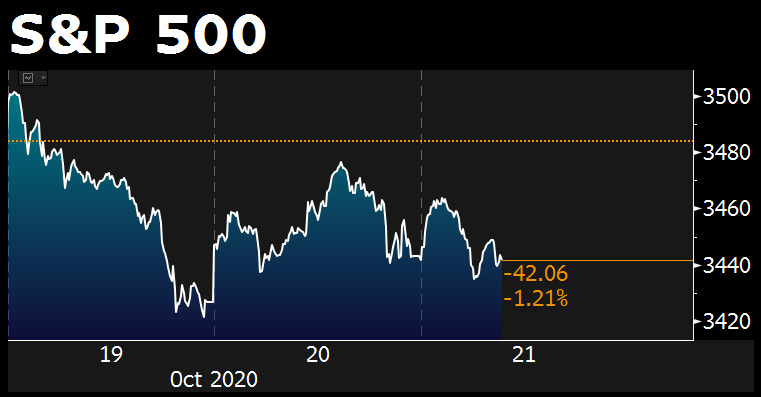 By the closing bell yesterday, Resources & Energy Group (ASX:REZ) shares had rocketed 228 per cent to 10.5c on the exchange of a whopping 574.3 million shares.

But that’s just the tip of the iceberg, according to one analyst, who predicts more share price growth ahead.

That strong kick to the share price was all thanks to news of a new, extremely high-grade gold discovery at the Gigante Grande prospect, part of the East Menzies Gold Field project in Western Australia.

Drilling by REZ delivered a peak high-grade hit of 1m at 76.4 grams per tonne (g/t) included in an interval of 20m at 5g/t from a 66m mineralised zone starting at just 71m.

To put that into context, anything around 5g/t is generally considered high-grade and while there is no official definition for a ‘bonanza’ grade (just a way of describing speccy finds), it’s safe to say the 76.4g/t hit would definitely make it into the bonanza category.

The new discovery is significant for REZ because these new results demonstrate strong potential for Gigante Grande to host a very large mineralised system.