PEAK ASSET: MORNING WRAP 4 NOVEMBER: | ASX to edge higher | Stocks Rally With Oil Ahead of Election Outcome | The RBA turned to quantitative easing – what does it mean for ASX small caps? |

How was your Cup Day? Any winners?

You missed an eventful 24 hours, as our American friends cast their last votes and results are starting to flow …

It will certainly be a “monumental” day, provided a clear winner does emerge …

This is great for our stock market!

Last night, U.S. stocks rallied for a second day, led by a surge in banks as Treasury yields climbed, with investors placing final bets before the American election outcome. The dollar weakened and crude oil increased the most in almost a month.

The S&P 500 was poised for its biggest two-day gain since June with an increase on Tuesday of as much as 2.4%. Financial firms rallied the most since July.

Democratic nominee Joe Biden leads President Donald Trump in the final polls, with some investors speculating his victory would bring a surge in federal spending.

Meanwhile, Alibaba Group Holding Ltd.’s U.S.-traded shares tumbled as much as 9.7% after China halted the initial public offering of Ant Group Co., in which Alibaba owns about a one-third stake.

Treasuries fell and a gauge of the dollar dropped the most in more than three weeks as a risk-on mood prevailed. Oil extended gains after jumping on Monday on increasing signs OPEC+ will delay a planned easing of output cuts.

“It’s a reflection of the market’s belief there is not going to be a whole lot of uncertainty after election day,” said Matt Stucky, portfolio manager for equities at Northwestern Mutual Wealth Management Co.

“The worst outcome for election day is a really uncertain winner scenario where it’s going to take weeks and a lot of legal back and forth before the decision is ultimately made.”

The SPI is up 11 points this morning. 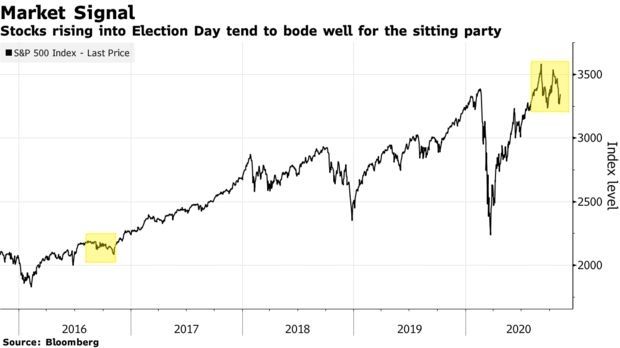 Want to join the Peak Community and get access to our "hand-picked" corporate deals?

Yesterday, our central bank announced an unprecedented package in attempt to improve our COVID-19 hit economy including:

It also hinted more would be done if necessary, including purchasing more bonds.

And it reiterated that it expects rates to stay at these levels for the medium term (at least three years).

While the bank admitted the recovery was underway and expects positive GDP growth in the September quarter, it will take some time to reach pre-pandemic economic output and employment levels.

It said the package would lower financing costs for borrowers, lower exchange rates and support asset prices and balance sheets.