Note: Be careful with diffusion indexes. This shows a rebound off the bottom – some improvement from May to August – but doesn’t show the level of activity.

Manufacturing activity in the region continued to expand this month, according to firms responding to the August Manufacturing Business Outlook Survey. The survey’s current indicators for general activity, new orders, and shipments remained positive for the third consecutive month but fell from their readings in July. The employment index also fell from its reading in July but remained in positive territory for the second consecutive month. Most of the future indicators remained elevated, suggesting that the firms expect growth over the next six months.

The diffusion index for current activity fell 7 points to 17.2 in August, its third consecutive positive reading after reaching long-term lows in April and May … On balance, the firms reported increases in manufacturing employment for the second consecutive month, but the current employment index fell 11 points to 9.0 this month.
emphasis added

This was below the consensus forecast. Here is a graph comparing the regional Fed surveys and the ISM manufacturing index: 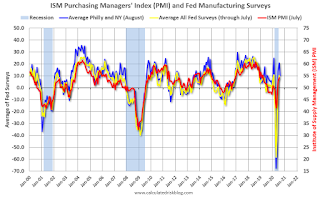 These early reports suggest the ISM manufacturing index will stay positive in August, but will likely not change much from the July level.

Blackstone has $46 billion of dry powder for commercial property deals. It’s real estate head lays out why he still sees big opportunities in offices — and how the red-hot logistics market is undervalued.

Blackstone has $46 billion of dry powder for commercial property deals. It's real estate head lays out why he still sees big opportunities in offices — and how the red-hot logistics market is undervalued.