Manufacturing activity in the region increased this month, according to results from the January Manufacturing Business Outlook Survey. The survey’s indicators for current activity, new orders, shipments, and employment were all positive and increased from their readings in December. The survey’s future activity indexes remained at relatively high readings, suggesting continued optimism about growth for the next six months.

The diffusion index for current general activity increased nearly 15 points this month, from a revised reading of 2.4 in December to 17.0 … Manufacturers continued to report expanding employment this month. The employment index increased 3 points to 19.3.
emphasis added

This was well above the consensus forecast. Here is a graph comparing the regional Fed surveys and the ISM manufacturing index: 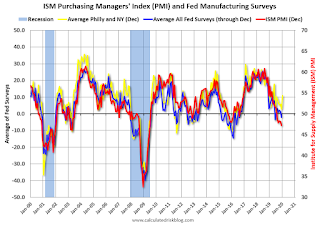 These early reports suggest the ISM manufacturing index will likely rebound into positive territory in January.