Transfer payments decreased by $70 billion in July, but were still $1.7 trillion (on SAAR basis) above the February level.  Most of the increase in transfer payments – compared to the level prior to the crisis – is now from unemployment insurance.

However, there will be sharp decline in unemployment insurance in August.

This table shows the amount of unemployment insurance and “Other” transfer payments since February 2020 (pre-crisis level).  The increase in “Other” was mostly due to other parts of the CARES Act such as the $1,200 one time payment.

A key measure of the health of the economy (Used by NBER in recession dating) is Real Personal Income less Transfer payments. 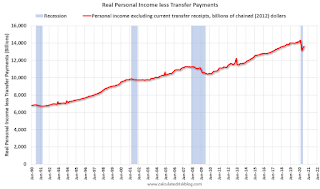 This measure of economic activity increased 0.7% in July, compared to June, and was down 5.0% compared to February 2020 (previous peak). 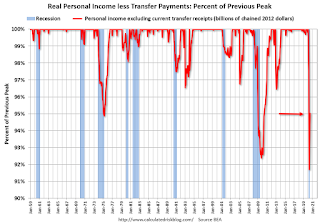 Another way to look at this data is as a percent of the previous peak.

Real personal income less transfer payments was off 8.3% in April. This was a larger decline than the worst of the great recession.

Preparing a cat for a road journey