Momentum is have its worst day on record – by far. Dispersion between stocks is the highest on record – by far. These relative moves in stocks/sectors are painful for many funds, a sharp reversal from last Wednesday, and compounded by the high grosses HFs have been running per the MS PB Content team. But a bull market rotation is not the same as a bear market rotation. Any pain is offset by a) the market rally (MS PB Content also notes that nets are high) and b) the P/L cushion coming into this event (the average fund has outperformed the market YTD) and a violent unwind on the long side of people’s books is unlikely in QDS’ view. Tech stocks can lag, but they are unlikely to sell off hard and take the overall market lower with them.  Macro flows should be supportive as retail has pulled nearly $200bn from equities this year and will likely add on the back of the election and vaccine developments, and systematic strategies will likely turn buyers once realized vol normalizes. 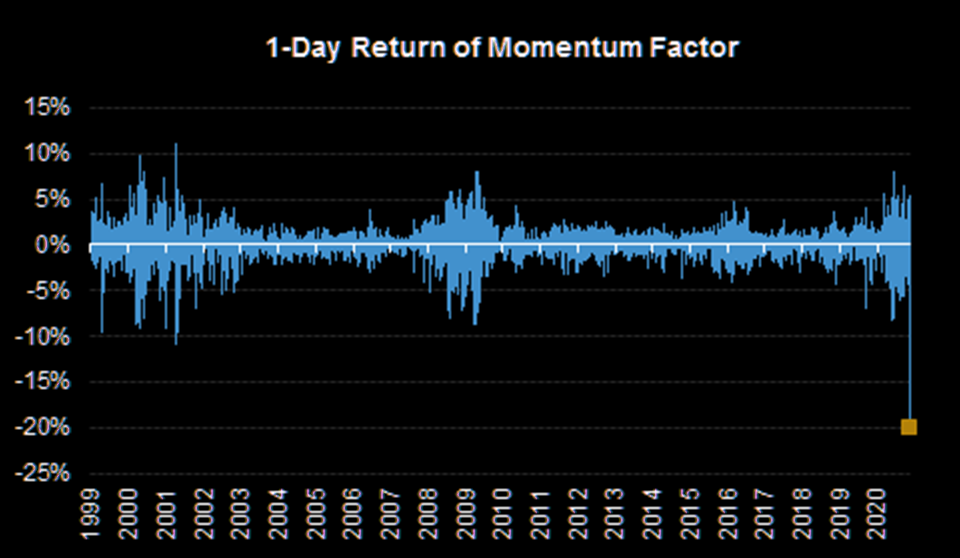 In a post-COVID world

"We remain firmly of the view that the post-vaccine economy will be characterized by a massive consumer boom. It will be financed by a combination of stimulus payments and savings generated by months—it will be a year, at least by the time herd immunity is reached—of enforced cutbacks in spending on discretionary services. The scale of households' cash build since the pandemic began is mind-boggling, with savings account balances at commercial banks and thrifts rising by a total of almost $2T in just eight months" 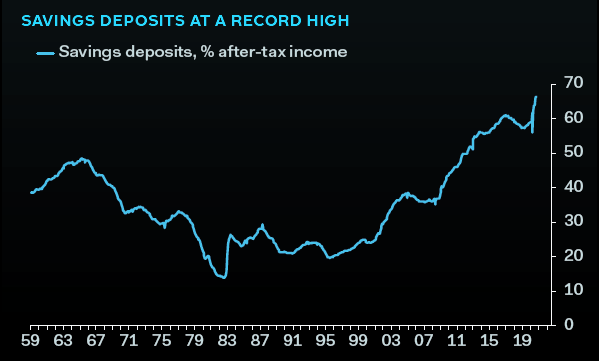 Tech and yields have a special "connection" as tech is the sensitive "duration" trade. The crowd has been taught to buy tech on any dips. Maybe that will work again, but whatever you do in tech space, be sure yields are on your "side".

QQQ vs US 10 year inverted. 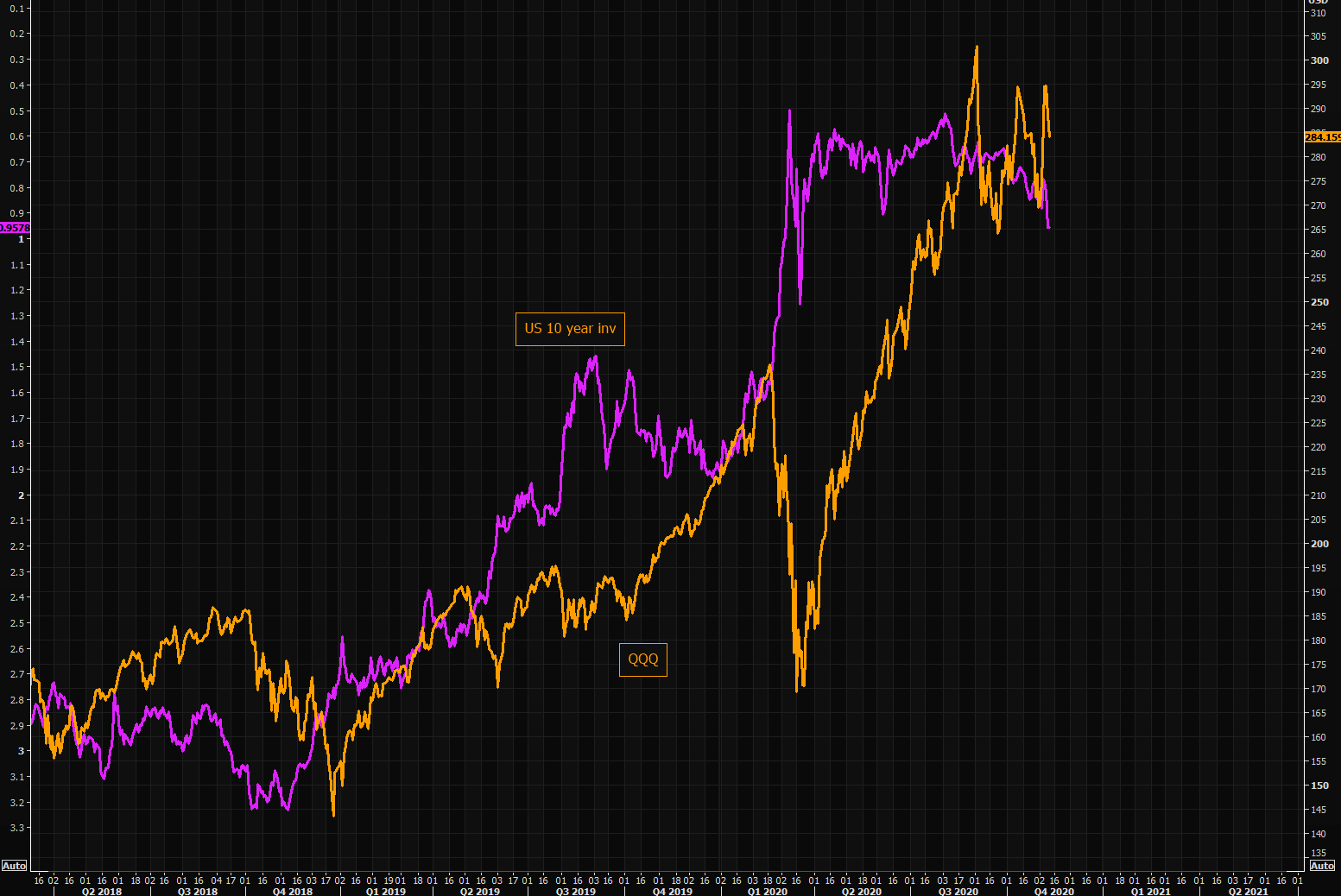 European banks, hated by majority, put in one of the biggest moves higher ever yesterday, and we are seeing the move continue today, although less violently.

It was only a few weeks ago so many were sending us the "European banks about to break out charts". If the vaccine will save EU banks is to be seen.

On Oct 23 we wrote about the EU banks outlining a few important points;

"Despite all the bearish arguments to be made, some early possible green shoots have been emerging lately…earnings have started to lead when it comes to EU banks…Do recall the M&A set up via GS we outlined earlier today"

We concluded our logic with;

"Things can move quickly when it comes to "forgotten" sectors. We like convexity plays for a possible further squeeze in the SX7E."

The move higher has been brutal and more violent than we imagined, but EU banks remain stuck in a range, and as we approach the upper part of the range, the prudent investor should not get too greedy. Chasing longs here looks like a very late trade. 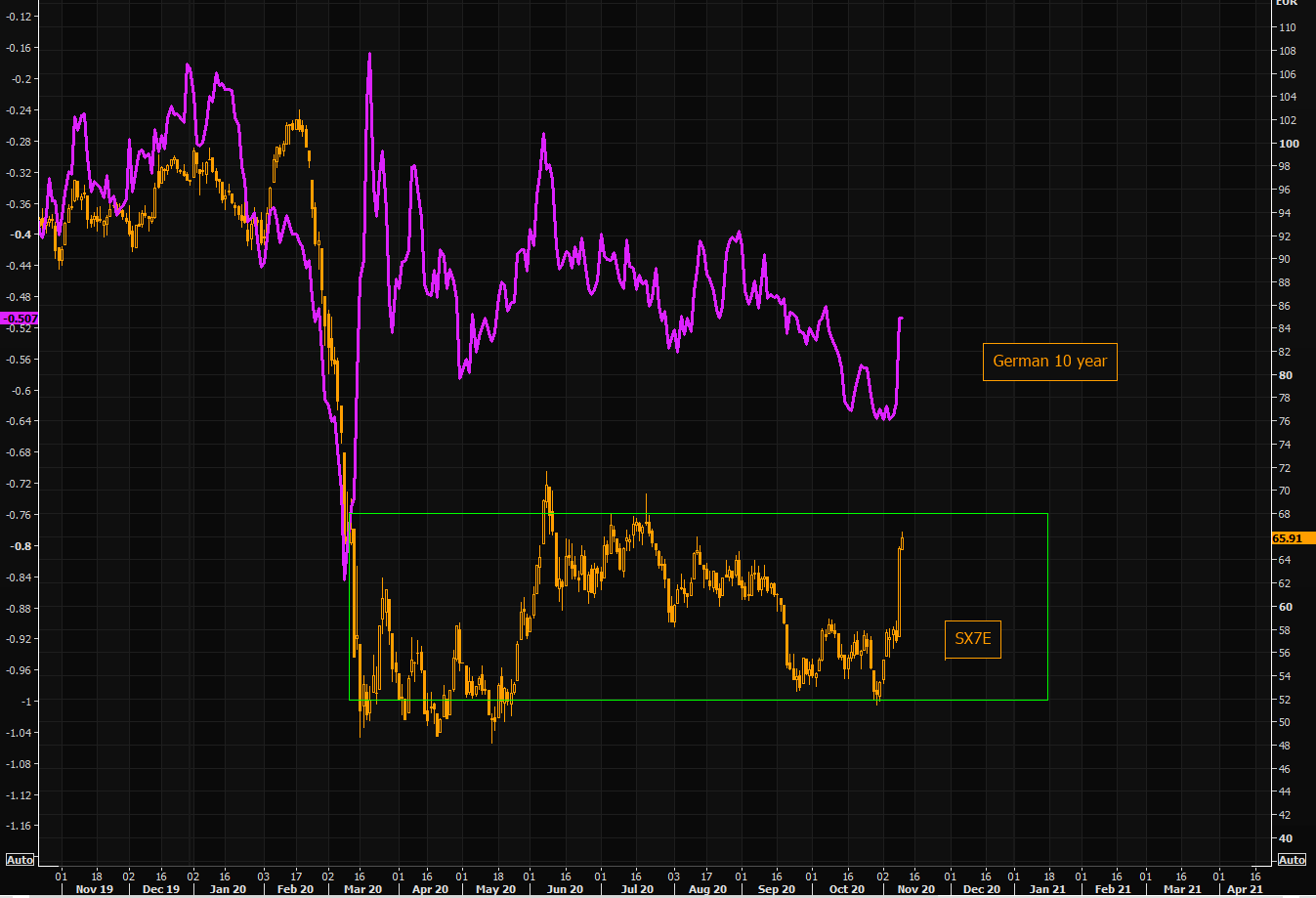 Small investor favorite stock picks continues to outperform. This is very good ingridient to suck more money into the markets and create the year-end melt-up.

Does NASDAQ need retail army to go all in before we can catch some real bids?

Volatile range for NASDAQ seems the base case scenario for now, but be careful, that burns a lot of premium… 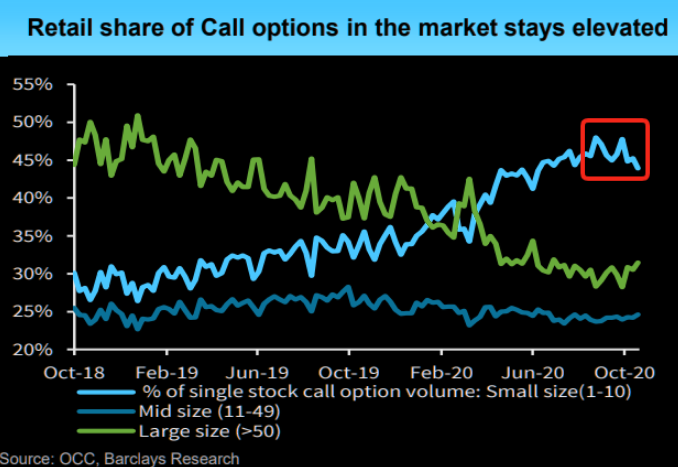 Upside used to be the main pain trade, but this has now shifted to a rotation frustration. We are seeing the NASDAQ vs Russell ratio move lower again, as Russell trade up 2% and NASDAQ is down approx. the same amount.

Until now you just had to "guess" direction and pace, now you need to add one more dimension to it… 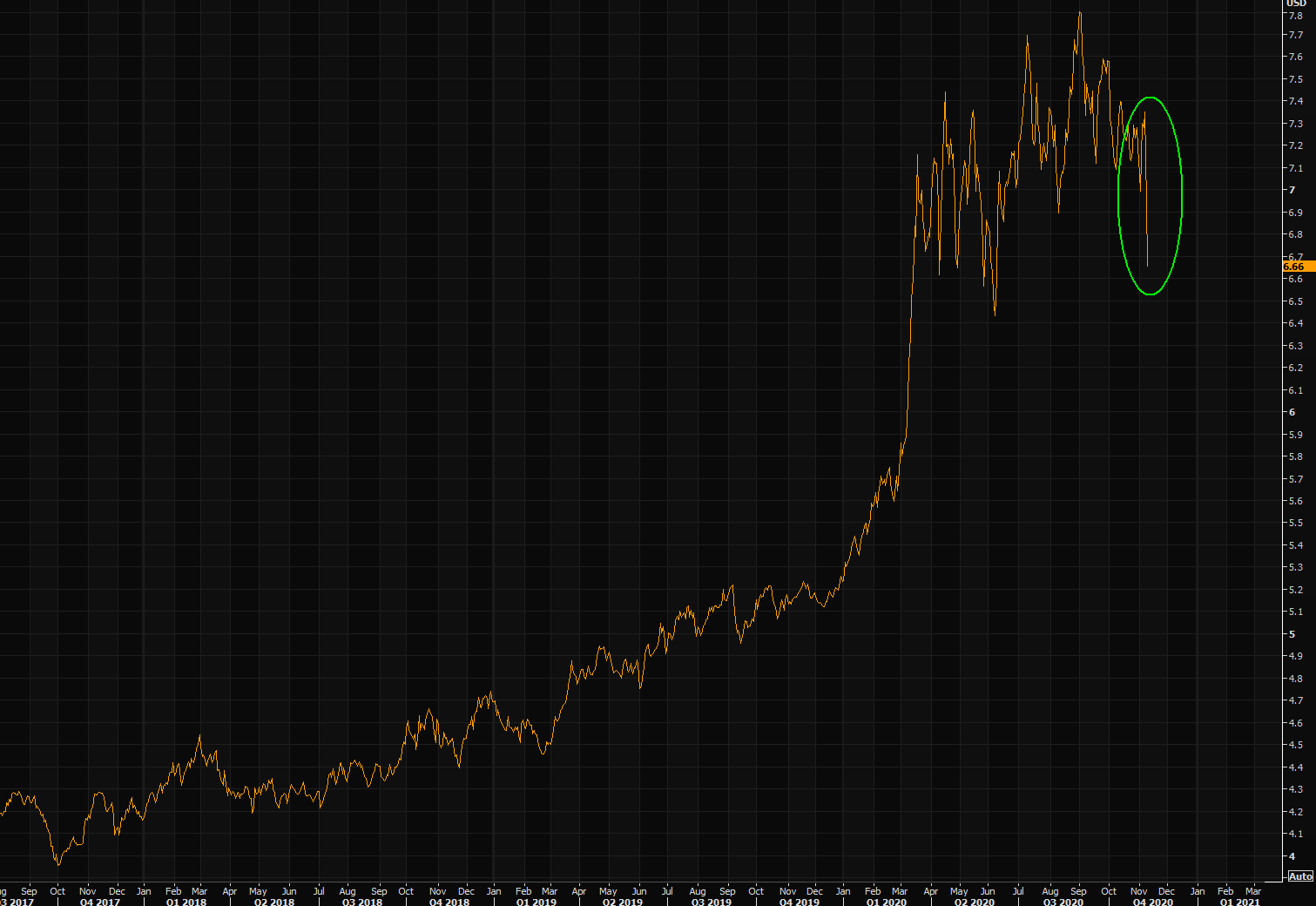 "Alongside the younger cohort of retail investors, I’d argue the core equity community holds a reasonably high degree of length (this is borne out clearly in Prime Brokerage data); on a scale of -5 to +5, let’s mark that camp at +4. the systematic trading crowd is more middle of the road — call it +3 — and, should be buyers of higher prices over the next week and the next month. so, when I throw those pieces in the blender, it feels like the trading community is approaching +4 … while the other active market participants we address feel lighter on the risk dial. therefore, I suspect the arbiter of the next 200 handles higher in S&P would need to come from elsewhere … retail, foreign, sovereign. the real money community was conspicuously quiet last week … I suspect that won’t last for too long"

VIX term structure is violently lower across the entire structure, but especially in the short end of the curve. As we pointed out, the 2/8 months VIX futs spread was in less panic than the actual VIX index, so despite all the comments of the VIX post elections puke, under the hood showed relatively little stress. 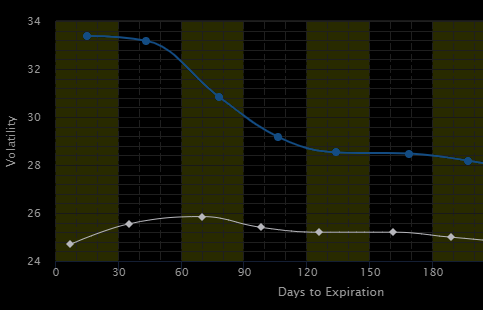 This election bounce has already surpassed what is supposed to happen…

Px action yesterday was very "erratic", and the candles left huge shadows. We remain true to our logic, this market is stuck for some longer…. 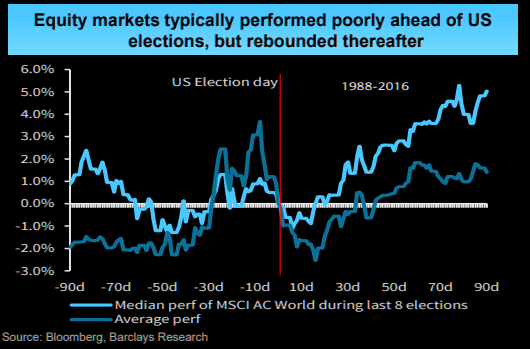 GS (and everyone else): Vaccine-led recovery to lift cyclical assets

GS: "Global economic recovery to broaden and deepen next year. Cyclical assets do not fully reflect our forecast of sustained expansion" 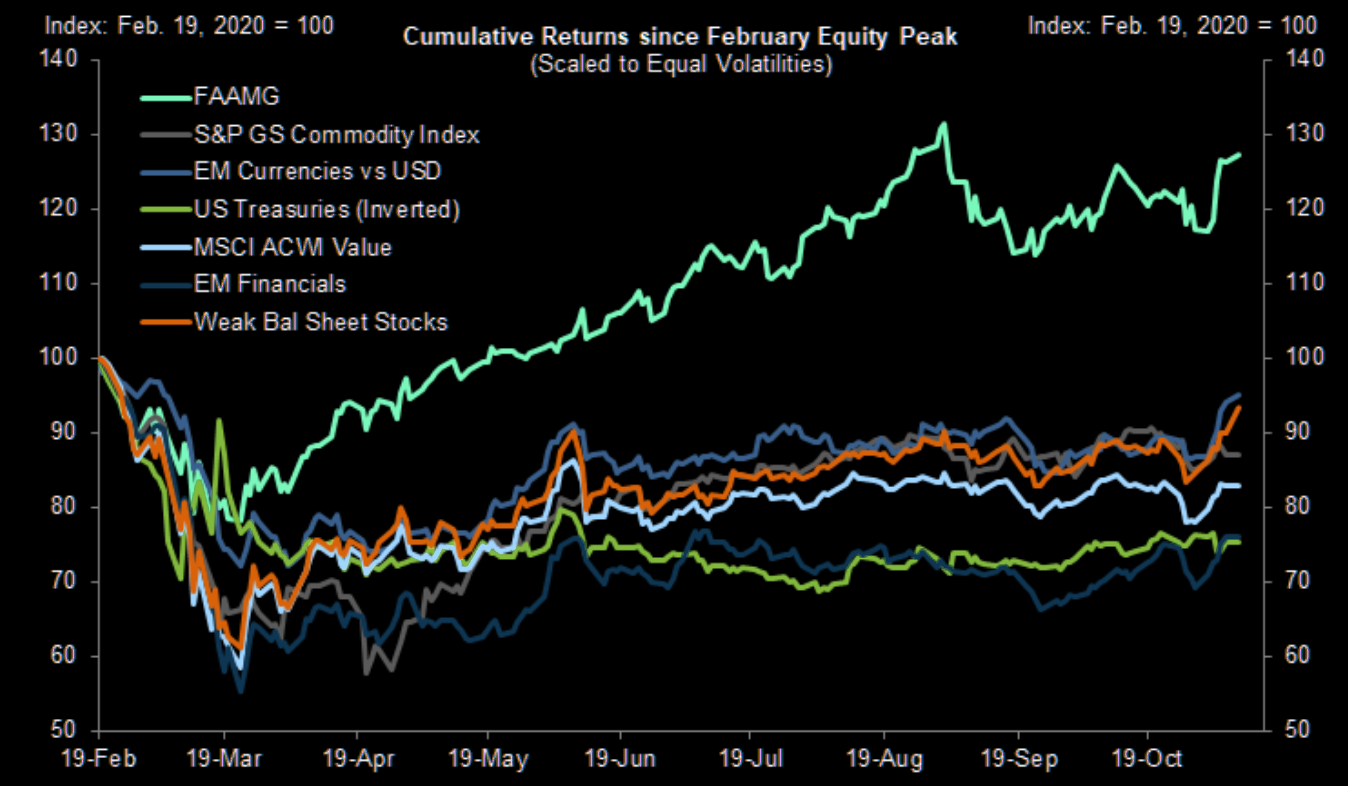 KWEB has given back the entire "break out" move. 100 day moving average is still "comfortably" lower. BABA, the biggest component, continues crashing and has not closed here since early September (currently breaking below the 100 day).

Funny how lately everybody loves the EM story, but do not want to realize EM these days is practically about tech…

Watch Chinese and Asian tech closely here as this space was leading on the way up. 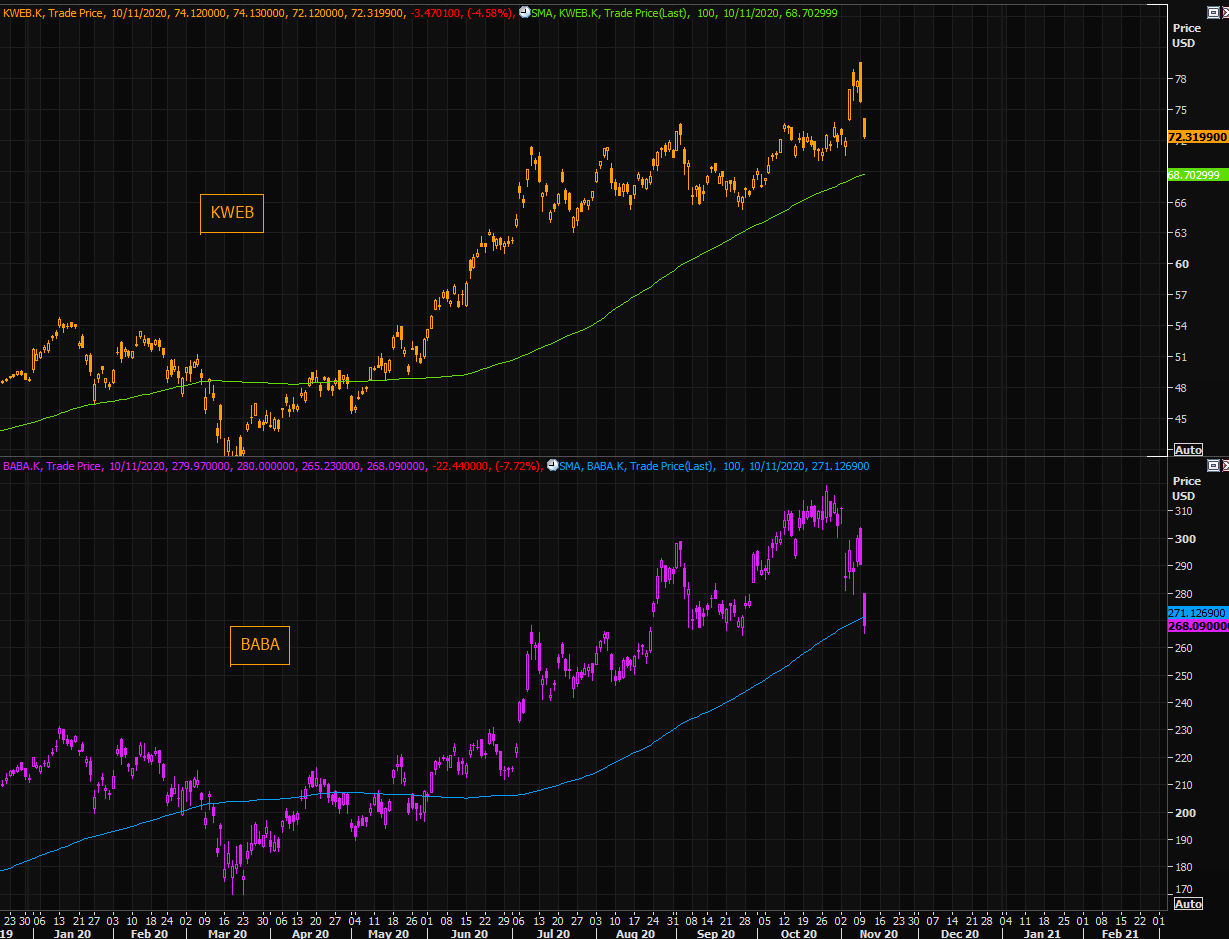 Could Chinese tech "bear" spill over to NI(h)Opium?

Do you consider NIO a part of the recent Chinese tech upside panic or is it a story of its own? You could make the bullish and the bearish argument fundamentally when it comes to NIO, but the psychology of masses is always the same. NIO is putting in the biggest negative candle today in pretty much forever. This is not a small cap any more, market cap $58bn, and has managed attracted many eager punters over the past few months.

Most parabolic charts end in tears. One of the latest "casualties" is ZM, down today again.

The psychology of speculation tends to follow the same patyh, always has and always will. The chart shows ZM and NIO. They have nothing to do with each other as businesses, but the psychology of the parabolic move is there.

Do we even need a catalyst? 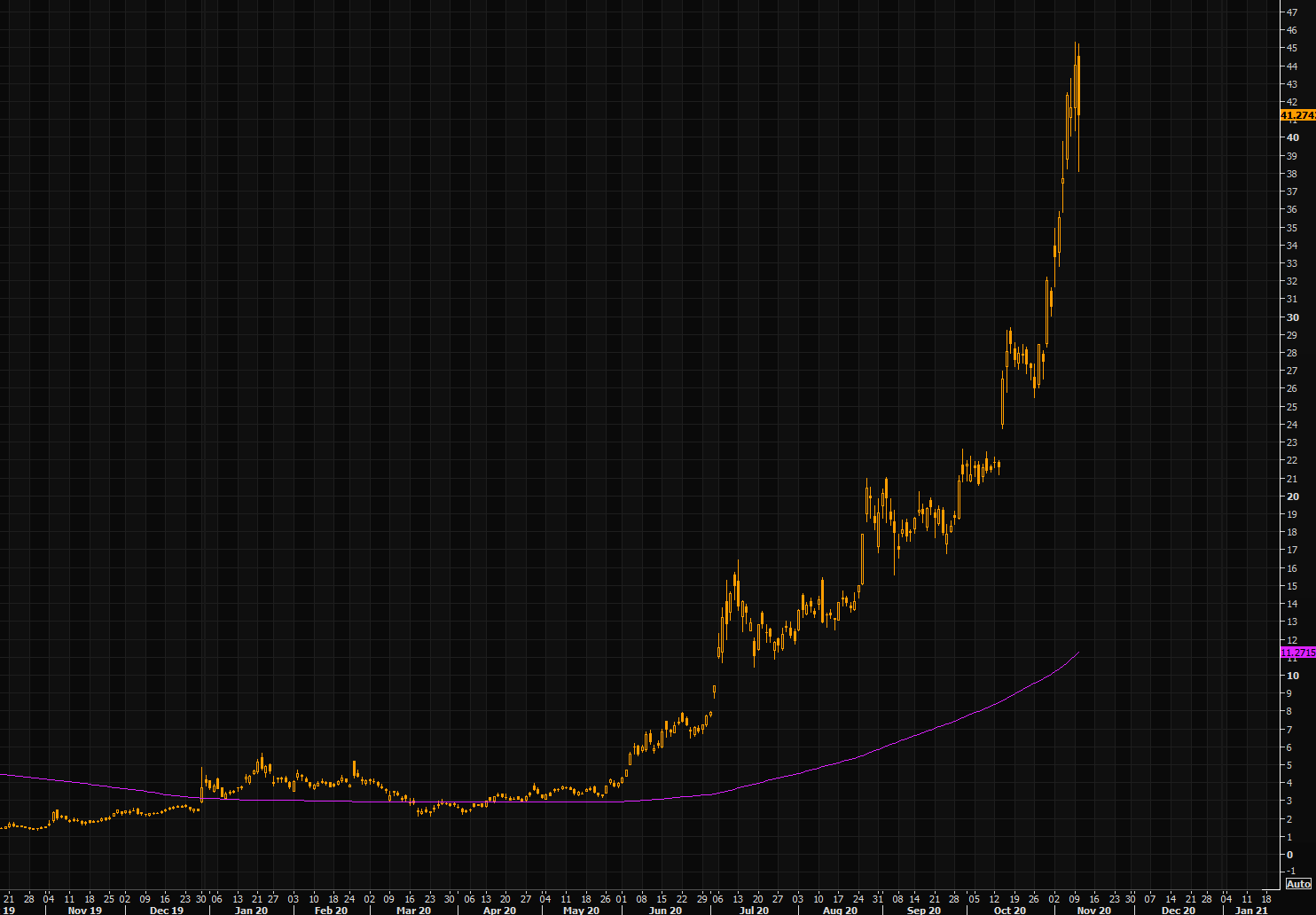 Will financials close this monster-gap even more?

Another attempt at a step in the right direction for the relative trade financials vs S&P500 vs 10 yr breakevens. 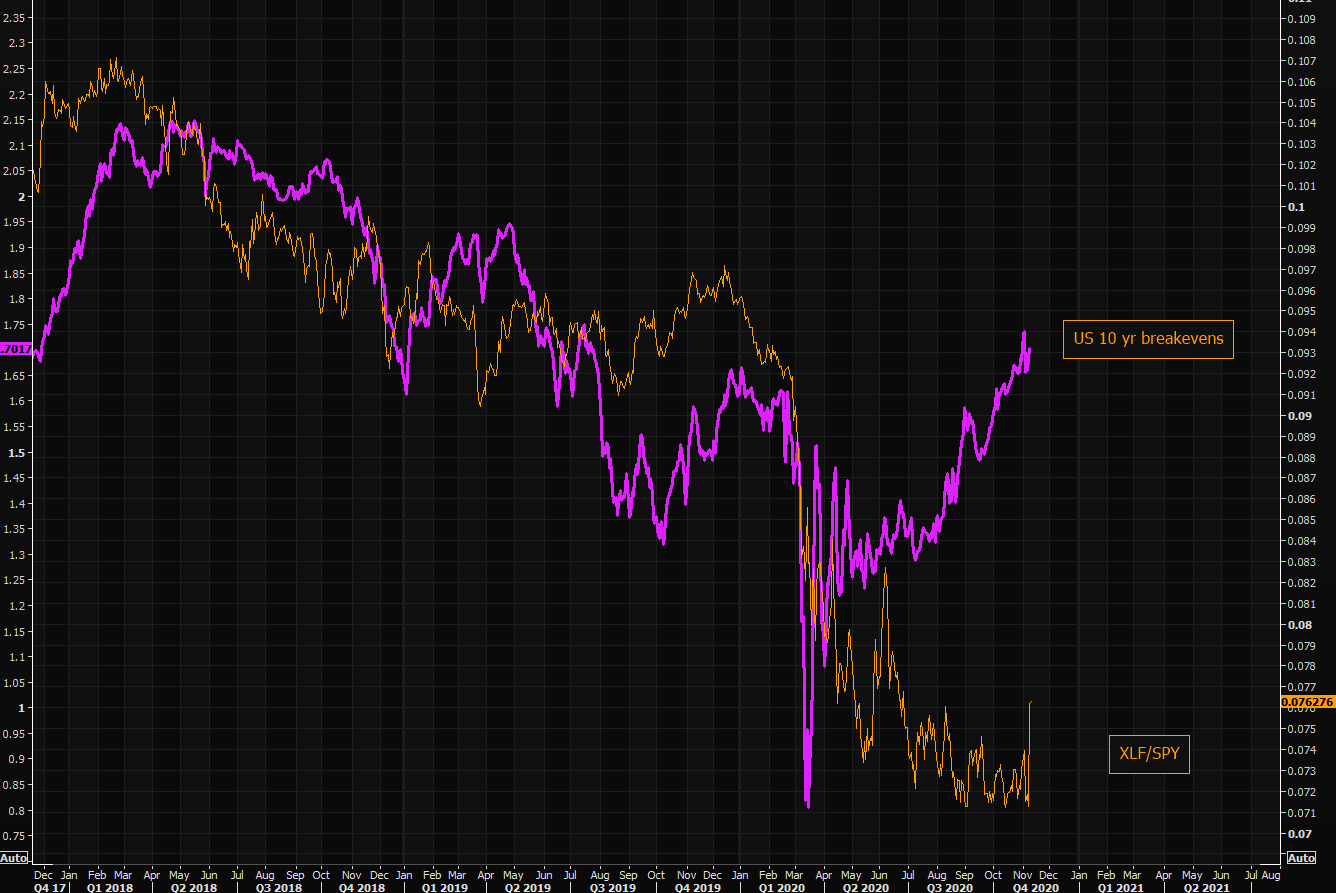 What could go wrong? Model signalling almost 0% risk of a 10% draw-down in the next 12 months….

The GS model shows probability of a 10% S&P 500 drawdown in the next 12m based on current valuations and CAI levels. Should we "laugh this off" as a model that no one looks at – or is this actually somewhat synonymous with the ever growing post-COVID complacency out there? 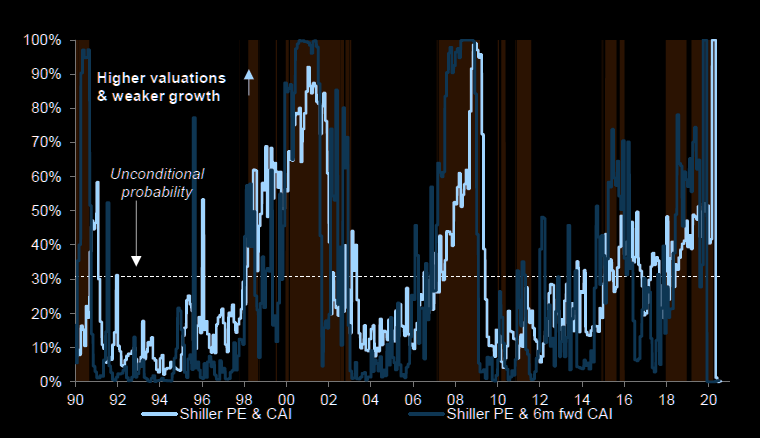 How strong is EU's antitrust case against Amazon?

WSJ reports that "The European Union is planning formal antitrust charges against Amazon. com Inc. over its treatment of third-party sellers". If Amazon is found guilty, it could be fined as much as 10% of its annual revenue.

The question is how strong is EU's case. Alec Stapp brings out an interesting point that Amazon is not even close to the list of % its revenue comings its own private labels. Will this potentially be another dud of a regulator going after a big tech company? 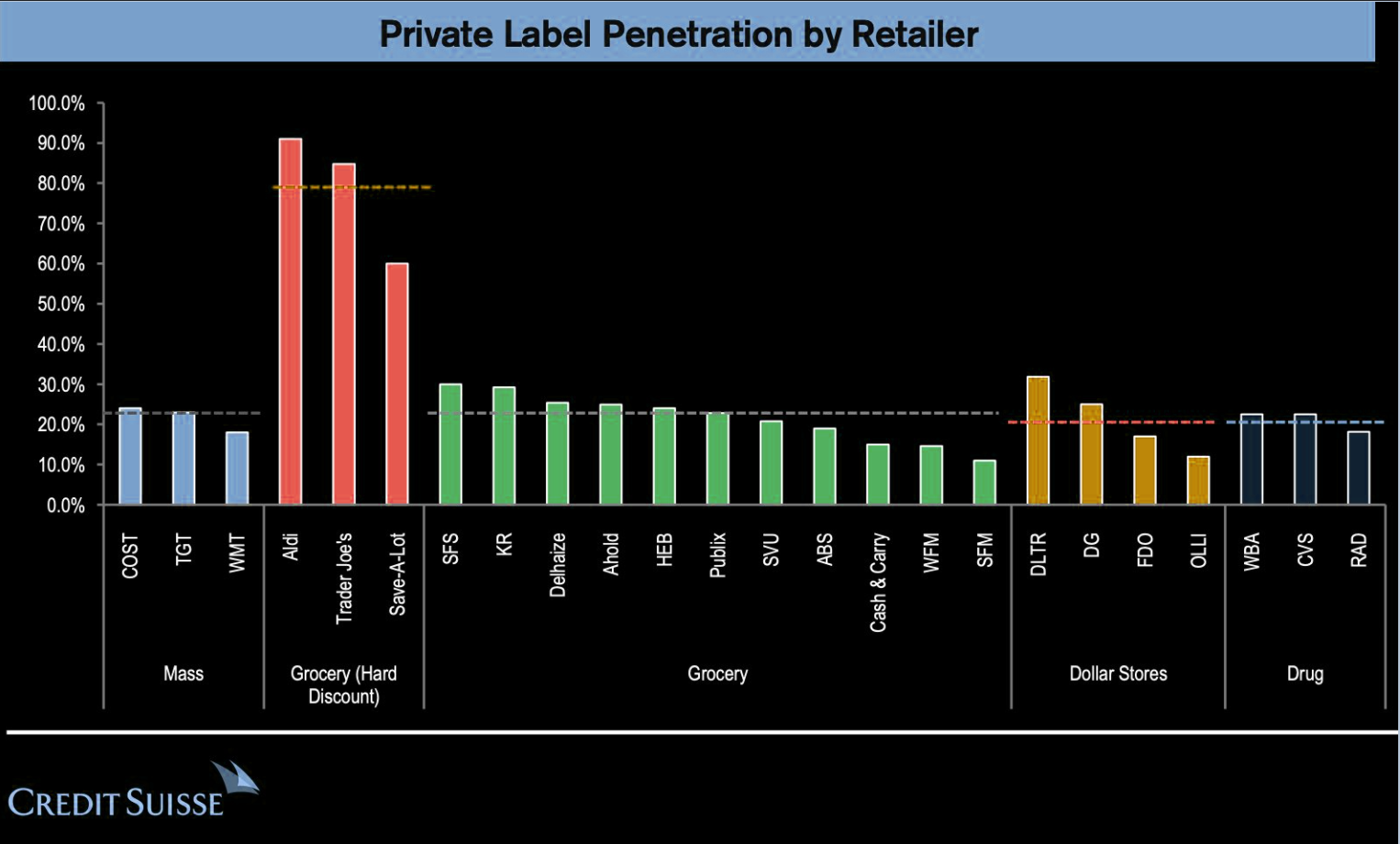