Total nonfarm payroll employment rose by 661,000 in September, and the unemployment rate declined to 7.9 percent, the U.S. Bureau of Labor Statistics reported today. These improvements in the labor market reflect the continued resumption of economic activity that had been curtailed due to the coronavirus (COVID-19) pandemic and efforts to contain it. In September, notable job gains occurred in leisure and hospitality, in retail trade, in health care and social assistance, and in professional and business services. Employment in government declined over the month, mainly in state and local government education.
…
In September, the unemployment rate declined by 0.5 percentage point to 7.9 percent, and the number of unemployed persons fell by 1.0 million to 12.6 million. Both measures have declined for 5 consecutive months but are higher than in February, by 4.4 percentage points and 6.8 million, respectively.
…
The change in total nonfarm payroll employment for July was revised up by 27,000, from +1,734,000 to +1,761,000, and the change for August was revised up by 118,000, from +1,371,000 to +1,489,000. With these revisions, employment in July and August combined was 145,000 more than previously reported.
emphasis added 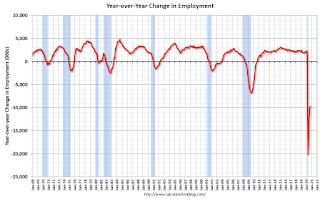 The first graph shows the year-over-year change in total non-farm employment since 1968.

In September, the year-over-year change was negative 9.65 million jobs.

Payrolls for July and August were revised up 145 thousand combined. 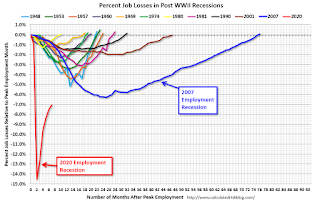 The second graph shows the job losses from the start of the employment recession, in percentage terms.

The current employment recession is by far the worst recession since WWII in percentage terms, and is still worse than the worst of the “Great Recession”.

The third graph shows the employment population ratio and the participation rate. 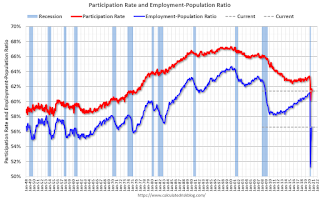 The Labor Force Participation Rate decreased to 61.4% in September. This is the percentage of the working age population in the labor force. 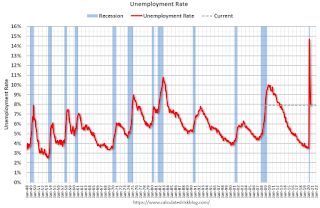 The unemployment rate decreased in September to 7.9%.

This was below consensus expectations, however July and August were revised up by 145,000 combined.

I’ll have much more later …