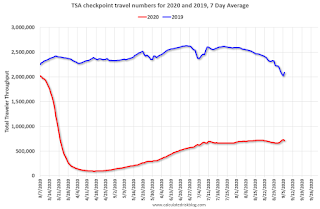 This data is as of September 6th.

The seven day average is down 66% from last year. Usually travel declines at this time of year (see Blue line), but travel is holding steady this year (so increasing as a percent of travel last year). 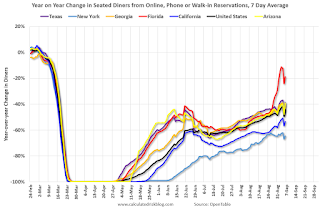 This data is updated through September 6, 2020.

Note that this data is for “only the restaurants that have chosen to reopen in a given market”. Since some restaurants have not reopened, the actual year-over-year decline is worse than shown. 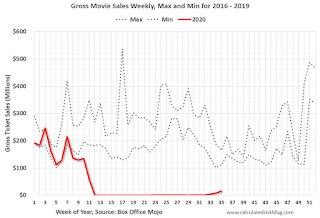 This data shows domestic box office for each week (red) and the maximum and minimum for the previous four years.  Data is from BoxOfficeMojo through September 3rd.

Movie ticket sales have picked up over the last few weeks, and were close to $16 million last week (compared to usually under $200 million per week in the late Summer / early Fall).

Most movie theaters are still closed, but are reopening (probably with limited seating at first). 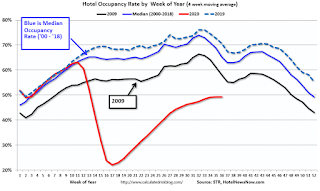 This data is through August 29th.

COVID-19 crushed hotel occupancy, and is currently down 27.7% year-over-year.

The leisure travel season usually peaks at the beginning of August, and then the occupancy rate typically declines sharply in the Fall.

With so many schools closed, the leisure travel season might have lasted longer than usual this year, but it is unlikely business travel will pickup significantly in the Fall. 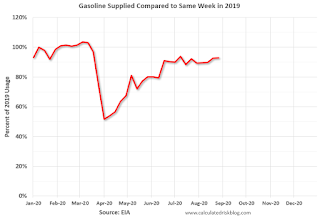 This graph, based on weekly data from the U.S. Energy Information Administration (EIA), shows gasoline supplied compared to the same week last year of .

At one point, gasoline supplied was off almost 50% YoY.

Note: I know several people that have driven to vacation spots – or to visit family – and they usually would have flown.   So this might be boosting gasoline consumption over the summer – and summer vacation might have lasted a little longer this year. 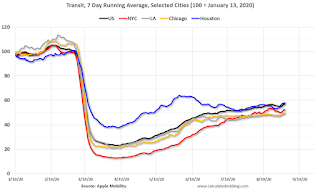 This data is through September 6th for the United States and several selected cities.

According to the Apple data directions requests, public transit in the 7 day average for the US is still only about 57% of the January level. It is at 49% in Los Angeles, and 58% in Houston. 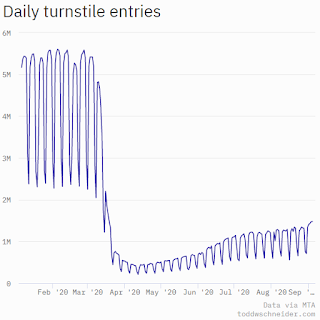 This data is through Friday, September 4th.

Renewables are not to blame for California blackouts