Starbucks Corporation SBUX recently announced that it will include plant-based food and beverages to menus across Asia from September in a bid to attract more customers. The company’s new menu will comprise products from Impossible Foods, Oatly and Beyond Meat, Inc. BYND.

The company will launch new products in markets including Hong Kong, Singapore, New Zealand, Taiwan and Thailand. The new products will be based on the local tastes and preferences.

The company announced that its new products will have the Spiced Impossible Puff and Maize Impossible Sandwich in Hong Kong, and Beyond Meat Bolognese Penne in Taiwan. In Singapore, the company will launch the Impossible Wrap including an Impossible Burger patty, avocado omelette, mushroom, caramelised onion and cheese.

Starbucks’ recent collaboration with Beyond Meat to roll out a plant-based lunch menu in the China is a testament to the same. Now customers can enjoy pastas and lasagna made utilizing Beyond Meat's plant-based beef products. It will also include meatless pork alternative known as Omnipork and popular non-dairy milk called Oatley. The new menu is available at more than 3,300 Starbucks locations in China. Both the companies have already partnered to roll out a plant-based sandwich to Canadian locations. 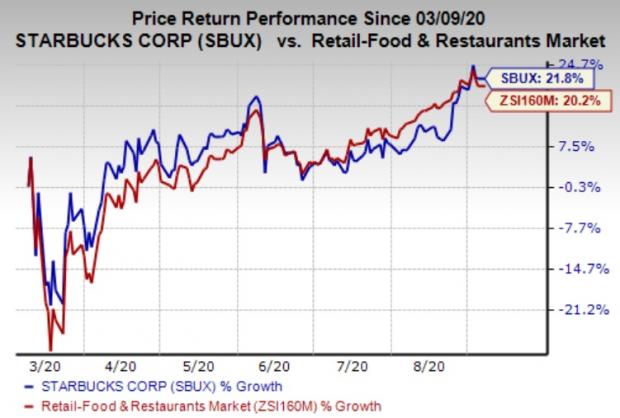 Some better-ranked stocks worth considering in the same space include Jack in the Box Inc. JACK and Papa John's International, Inc. PZZA, each sporting a Zacks Rank #1 (Strong Buy). You can see the complete list of today’s Zacks #1 Rank stocks here.

Papa John's has a three-five year earnings per share growth rate of 8%.

The Hottest Tech Mega-Trend of All

Last year, it generated $24 billion in global revenues. By 2020, it's predicted to blast through the roof to $77.6 billion. Famed investor Mark Cuban says it will produce "the world's first trillionaires," but that should still leave plenty of money for regular investors who make the right trades early.

MBA Survey: “Share of Mortgage Loans in Forbearance Declines to 7.16%”

Is the Options Market Predicting a Spike in Entravision (EVC) Stock?

AP: Own an Echo? Amazon may be helping itself to your bandwidth

Is the Options Market Predicting a Spike in Entravision (EVC) Stock?