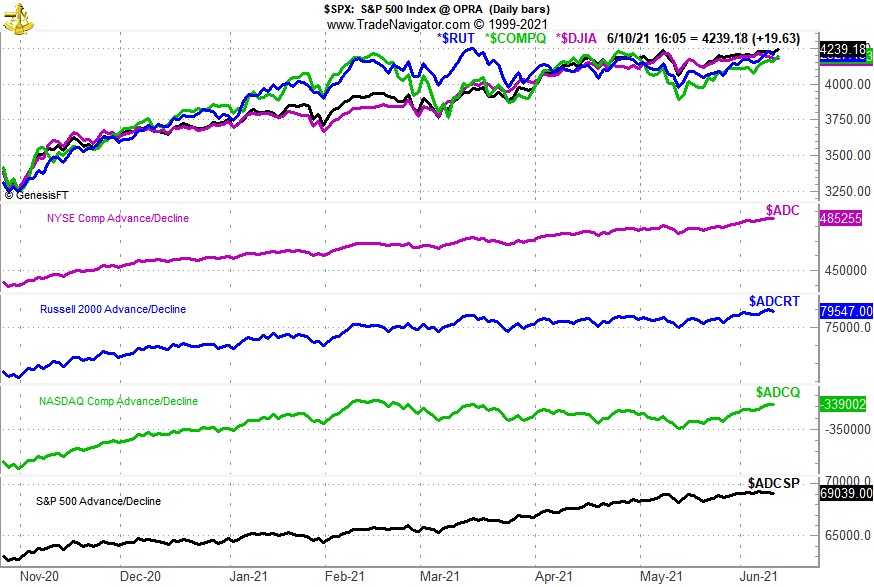 When NASDAQ turned and its advance/decline began trending lower, DJIA, S&P 500 and Russell 2000 essentially went nowhere and traded in a range. Bullishly, it appears NASDAQ’s advance/decline line appears to have bottomed in mid-May and is on the verge of eclipsing its peak from February. Broad participation across all the major indexes is a bullish sign and is generally indicative of a healthy move higher is underway. S&P 500 closed at a new all-time high today. DJIA, NASDAQ and Russell 2000 are closing in on their respective all-time highs.
In the near-term, new all-times are likely. However, June is the last month of NASDAQ’s “Best Eight Months” and historically soon after the start of the second half of the year, around mid-July, markets have stalled out and tended to slip into a sideways to lower trend. Inflation trends and the Fed are two possible catalysts that could clip the market’s wings this year. Inflation could prove to be more than just transitory and at some point, perhaps sooner than expected, the Fed will likely begin tapering asset purchases.
NASDAQ Seasonal MACD Update
In the chart below, NASDAQ’s Seasonal MACD Sell turned positive shortly after its advance/decline line turned up in May. It has remained positive since then and recent strength has reversed last weeks negative trend displayed by shrinking histogram bars. As of today’s close, it would take a one-day loss of 713.66 NASDAQ points (–5.09%) to turn its MACD indicator negative. 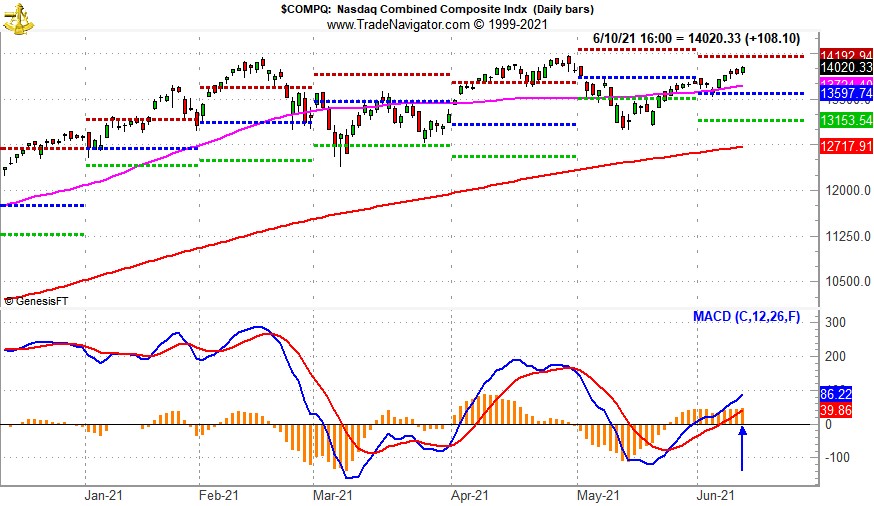 When NASDAQ’s MACD Sell indicator turns negative, we will issue our NASDAQ Seasonal MACD Sell signal and begin clearing out remaining technology and/or small-cap positions held in the Almanac Investor ETF Portfolios. Until that time, all related positions are on Hold.
Portfolio Updates
Over the last four weeks since last update through yesterday’s close, S&P 500 climbed 3.9% lower while Russell 2000 jumped 9.0%. During the same time period the entire portfolio climbed 2.2% higher excluding dividends and any fees. Overall portfolio performance was held in check by its cash balance and exposure to numerous defensive positions. The bulk of the overall portfolio gains were the result of advances in the Small-cap portfolio. Avid Tech Inc (AVID) produced a sizable portion of the gain and is currently the best position in the portfolio, up 163.1% after selling half the original position when it first doubled.
Overall, small caps are still the standout in the portfolio, up on average 88.2%. Four of the positions held are up triple digits. KB Home (KBH), WSFS Financial Corp (WSFS) and Customers Bancorp (CUBI) join AVID all up over 100%. With the exception of AVID, they are modestly lower today as the Russell 2000 has given way to NASDAQ today. Another standout recently, MGP Ingredients (MGPI), jumped over 22% since last update. MGPI’s most recent earnings recent (and the prior three) all beat estimates, but the current release was a homerun as reported earnings were nearly double the consensus.
Mid-cap positions advanced 1.8% over the last four weeks. Algonquin Power (AQN) was a suggested buy last update and can still be considered on dips below its buy limit of $15.45. AQN has recovered nicely since its mid-May low and appears to be gaining momentum. At current prices its valuation remains quite reasonable and its dividend yield is quite attractive at over twice the rate a 10-year Treasury currently pays.
JetBlue Airways (JBLU) is still the top-performing position in the Mid-Cap portfolio, up 110.1%. JBLU is on Hold. We have previously noted that the bulk of potential gains from JBLU have likely already been achieved. Should JBLU make another run back above $20, it might be time to consider closing out the position. In the meantime, a reasonable tight stop loss remains in place and should preserve the bulk of the gains so far.
Valmont Industries (VMI) is the second-best performing position amongst mid-cap positions, up 54.1%. VMI is in the metal fabrication industry but sells its products across numerous sectors. A massive federal infrastructure spending bill would likely be a direct benefit however, VMI’s success is not linked entirely to whether one is passed. VMI is on Hold.
In advance of the upcoming “Worst Four Months,” all defensive positions (shaded in grey in table below) can be considered on dips or at current levels. Suggested buy limits are included. Abbott Labs (ABT), AT&T (T) and Verizon (VZ) can be considered at current levels up to their respective buy limits. Other defensive positions, AEE, BIP, DTE, DUK, EXC and SO can be considered on dips.
Please see table below for specific stop losses and current advice for each position in the portfolio. All positions not previously mentioned are on Hold. 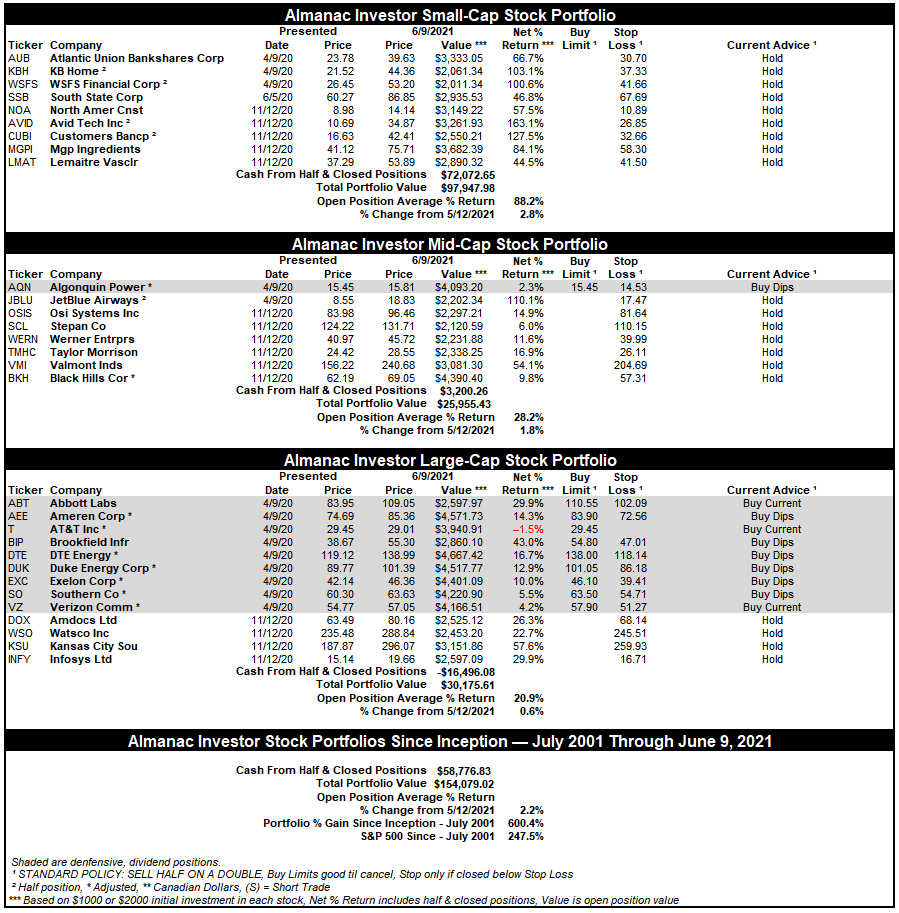 Pursuant to the provisions of Rule 206 (4) of the Investment
Advisers Act of 1940, readers should recognize that not all recommendations
made in the future will be profitable or will equal the performance of any
recommendations referred to in this Email issue. The information presented
in this Almanac Investor has been obtained from sources believed to
be reliable, but its accuracy is not guaranteed. The security portfolio
of the editor, its employees, or affiliated companies may, in some instances,
include securities mentioned in this Alert. Additional
disclosures can be found at www.stocktradersalmanac.com.

To unsubscribe
to Almanac Investor, please contact a Customer
Care representative by phone. To update or change your account information,
please visit www.stocktradersalmanac.com,
log-in and go to My Account.