3/25/2021: Dow 32619.48 | S&P 3909.52 | NASDAQ 12977.68 | Russell 2K 2183.12 | NYSE 15410.37 | Value Line Arith 8945.76
Fundamental: Supportive. Here in the U.S. vaccine rollout has accelerated and case counts have receded from their recent peaks which is supporting expanding economic activity. Weekly initial jobless claims have fallen to their lowest level since the start of the pandemic. Another massive stimulus package has been passed into law and funds are flowing. As of March 24, Atlanta Fed’s GDPNow estimate of Q1 growth stands at a solid 5.4%. Pushing back on the positives is talk of higher taxes and valuations in some areas of the market.
Technical: Diverging. DJIA, S&P 500 and Russell 2000 all closed at new all-time highs in March. NASDAQ did not. All four have been retreating since mid-March. NASDAQ and Russell 2000 have slipped below their respective 50-day moving averages. DJIA and S&P 500 are still above their 50-day moving averages. Profit taking and/or rotation is likely underway. Until this abates and all four indexes exhibit strength, meaningful gains could be hard to come by.
Monetary: 0 – 0.25%. No recent significant changes have occurred. The Fed has to walk a fine line to appease equity and bond markets and so far, it appears to be doing so as the 10-year Treasury yield has cooled. It seems reasonable to expect the Fed to unwind its current accommodative stance similar to the way it last did, slowly and well calculated.
Seasonal: Bullish. April is the last month of DJIA and S&P 500 “Best Six Months.” It is DJIA’s best month since 1950, second best S&P 500 and fourth for NASDAQ. DJIA has been up 15 Aprils in a row. Remain vigilant as our Seasonal MACD Sell for DJIA and S&P 500 can occur anytime on or after April 1.
Psychological: Climbing. According to Investor’s Intelligence Advisors Sentiment survey Bullish advisors have rebounded to 57.4%. Correction advisors have slipped to 23.8% while Bearish advisors are at 18.8%. All of these numbers are about the middle of the range that has existed for months as there have been only a few bumps in the market’s rocket-like move higher off of last March’s lows. Current elevated bullish sentiment suggests a cautionary stance at least in the near-term.
April Outlook: Late-March Weakness Sets Up End of Best Six Months Rally
The last month of our “Best Six Months” is now upon us. So it’s the perfect time to provide a refresher for longtime subscribers and primer for those that have recently joined us. We thank you all for the support. We do not simply “Sell in May and go away.” We employ a more nuanced and subtle approach to how we implement our Best & Worst Months Switching Strategies. We are not issuing the signal at this time.
As we prepare for our upcoming Best Six Months Seasonal MACD Sell Signal that can occur any time on or after April 1 there are several factors and aspects of the strategy we’d like to be sure you’re up to speed on. DJIA’s and S&P 500’s “Worst Six Months” are May through October. NASDAQ’s “Worst Four Months” are June through October. We begin tracking DJIA and S&P 500 for our “Best Six Months” MACD Seasonal Sell Signal on or after April 1. We begin tracking NASDAQ for its “Best Eight Months” MACD Sell Signal on or after June 1.
All three indices are currently in sell mode (you can see this in the DJIA in the chart below). We will issue our Seasonal MACD Sell Signal when corresponding MACD Sell indicators applied to DJIA and S&P 500 both crossover and issue a new sell signal on or after April 1. We will not be issuing our NASDAQ Best Eight Months MACD Sell Signal until on or after June 1. Historical dates for the “Sell Signal” can be seen in the tables under the “Our Strategy” tab on the website.
When we issue our DJIA and S&P 500 Seasonal Sell Signal you will receive an email Alert after the close that day. At that time we will either sell associated positions outright or implement tight trailing stop losses. Additional bearish/defensive positions in: iShares 7-10 Year Treasury (IEF), iShares 20+ Year Treasury (TLT), iShares Core US Aggregate Bond (AGG), Vanguard Total Bond Market (BND), ProShares Short Dow 30 (DOG), ProShares Short S&P 500 (SH) and/or other protective strategies may also be considered.
All current stock and ETF holdings will be reevaluated at that time. Weak or underperforming positions can be closed out, stop losses can be raised, new buying can be limited and we will evaluate the timing of adding positions in sectors that perform well in the Worst Six Months and presenting you with a new basket of defensive stocks.
April Rally
Recent weakness following the Ides of March arrived on cue with historical seasonal trends as you can see in the chart below of the “S&P 500 One-Year Seasonal Pattern Since 1949.” Weakness this week is rather typical of the week after Triple Witching as we discussed last month and as is detailed in the Stock Trader’s Almanac 2021. Today’s late-day rebound is encouraging, but the last several days of March often succumb to end-of-Q1 selling pressures. Late-March weakness has frequently been recovered early in April.
Once those end-of-Q1 pressures are alleviated we expect April to deliver its usual upside performance. In fact, this recent weakness sets up well for an April rally. An April rally would in turn set up a solid Best Six Months MACD Seasonal Sell Signal. With only 7 S&P 500 losses in the last 31 years, April has been a consistent performer. April is the first month of the second quarter and welcomes in the new earnings season, which promises to help buoy stock prices as year-over-year comparison should be improved over last year’s Covid-impacted numbers.

Seasonal patterns remain on track as you can see in the chart above, though they are more pronounced from the powerful post-Covid bear market recovery rally and recent increased volatility. Levels may be more extreme, but the seasonal trends remain intact this year as they have been since September 2020 as we last illustrated in the December Outlook. 2021 as represented by the orange line in the chart above has exhibited rather typical post-election year seasonal patterns with the late-February weakness, early March strength and the recent week after Triple Witching selling.
In addition to April bullish seasonality current fundamentals are supportive. Vaccines are rolling out as hoped and positive cases continue to retreat here in the States. The jobs market continues to improve and funds are flowing from the latest giant stimulus legislation. Q1 GDP and earnings are expected to be robust, but valuations are high and the threat of higher taxes could take the air out of the market.
The Fed has managed to appease the market for the time being, but if inflation fears ramp up quickly, pushing long bond yield higher, the market is prone to a correction or consolidation. Lingering pandemic/vaccine and geopolitical issues around the world, along with teetering market internals, a stretched technical picture, and the end of the Best Six Months November-April on the horizon, it is not inconceivable to expect the market to consolidate over the Worst Six Months May-October (AKA “Sell in May”).
The market is also prone to some mean reversion after the 1-year gain of 74.8% on the S&P 500 from the March 23, 2020 low. We ran the numbers on the 1-year rolling returns for the S&P 500 back to 1949 on the blog earlier this week. While these giant spikes do come at the early stages of extended bull runs, gains of this magnitude have not been sustained and the market has tended to revert to the mean. The arithmetic mean or average rolling 1-year return since 1949 is 9.15%, which isn’t bad either.
Last time we had a 1-year rolling return of this magnitude in 2010 when the S&P was up 68.6% on March 9, 2010 from the March 9, 2009 secular bear market low we had a 10.3% correction to the July 2, 2010 low and a 15.75% rolling 1-year return from March 9, 2010 to March 9, 2011. And let’s not forget the May 6, 2010 flash crash. While we are by no means “bearish” perhaps a little caution and portfolio defense in the near future is not a crazy idea.
The prospects for the resumption of the rally are encouraging, but heeding our “Sell Signal” when it arrives and following our defensive portfolio maneuvers can help reduce risk in the event April fails to live up to its reputation. Avoiding losses is even more important than making gains.
Pulse of the Market
After struggling to maintain pace with technology stocks throughout much of last year, DJIA is the second-best performing index of this year. Of the five key indexes that we routinely track, only the Russell 2000 is having a better year. On March 17, DJIA closed above 33,000 for the first time ever (1). This puts DJIA comfortably ahead of our schedule for DJIA to reach 38,820 by 2025.
But recent, seasonal week-after-quarterly-options-expiration weakness has transpired pulling the market lower as the end of the first quarter approaches. Due to recent weakness, both the faster and slower moving MACD indicators applied to DJIA have turned negative (2). Historically, late-March weakness has set up April (DJIA’s top month since 1950) nicely. DJIA has been positive in 15 straight Aprils. DJIA’s last down April was in 2005. 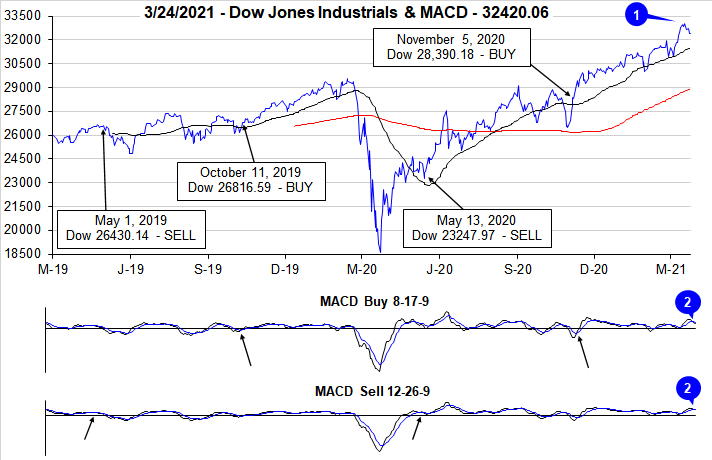 DJIA’s leadership this year can be confirmed by its eight weekly gains over the first twelve weeks compared to seven by S&P 500 (4) and six from NASDAQ (5). DJIA’s current streak of eight advancing Mondays (or first trading day of the week) (3) is also notable. DJIA’s last Monday winning streak lasted thirteen weeks started in mid-May of last year and lasted into August. During that run DJIA gained nearly 4075 points (16.7%).
Market breadth measured by NYSE Weekly Advancers and NYSE Weekly Decliners (6) was positive in two of the last four weeks. For the week ending March 12, Weekly Advancers reached their second highest level of 2021 as NASDAQ joined DJIA and S&P 500 with a weekly gain. However cumulative market Advance/Decline lines have been trending lower since mid-March (technology since mid-February).
Weekly New Highs (7) had expanded to their highest level since January 2004 two weeks ago. That peak at 951 was one better than the peak reached in April 2010 when the market corrected over 10% from its April high to an early July low. Prior to the surge in Weekly New Highs, Weekly New Lows jumped to over 200, the most in nearly a year. The most clearly bullish scenario is expanding New Highs and shrinking New Lows. That trend had been in place and appears to be in danger now. The market could experience some rotation, a sideways period or possible even a pullback or correction before it resumes its climb higher.
The Treasury yield curve has continued to steepen over the past four weeks as 90-day Treasury yields held steady just above 0% and the 30-Year Treasury yield climbed to its highest level since July 2019 (8). Historically speaking, rates are still low, but the surge in long-dated yields could encourage the Fed to take some action. A repeat of Operation Twist could appease the market.
Click for larger graphic…