Could DC’s New Political Alignment Be a Fiscal Goldilocks Scenario?

[2021 Stock Trader’s Almanac shipping update: Following production delays at our publisher, John Wiley & Sons, the 2021 Almanac was shipped to all existing members on December 28 via USPS. The USPS is also experiencing some delays, but your 2021 Almanac should be arriving soon in your mailbox, if it has not already. New Members that joined since December 30, we are shipping your 2021 Almanac as quickly as possible based upon the date you signed up.]
Now that the Georgia Senate seats runoff is settled and Joe Biden’s presidential election win has been certified we have more clarity on the political alignment for the next two years. We can extrapolate expected market performance based historical market performance under various political alignments and scenarios.
The two newly elected Democratic Senators from Georgia have tipped the balance of power in the Senate toward the Dems to an effective 50/50 split with the two Independents that caucus with the Dems. Democrats will gain control of the Senate with Kamala Harris’ tie-breaking vote once she is sworn in as vice president. Though the Democratic majority in the House of Representatives was diminished in the November elections they still maintain control.
So the Dems control the White House and have virtual control of Congress, albeit by the thinnest of margins. The Senate majority is so thin you could consider this a split Congress. The thinking here is that this slim Democratic majority is likely sufficient to pass additional stimulus packages and perhaps even some real infrastructure legislation that has eluded Washington for decades. Yet, it’s not wide enough to push through any major tax increases or a Green New Deal.
In our Political Alignment Market Performance chart below you can see that the market has done best under a Democratic President with a Republican Congress gaining an average of 16.4% since 1949 and less than half as well with a Democratic Congress averaging 7.4% a year. However with a split Congress and a Democratic President, DJIA has returned an impressive 11.7%, though this is an extremely small dataset of four instances all under Obama from 2011-2014. 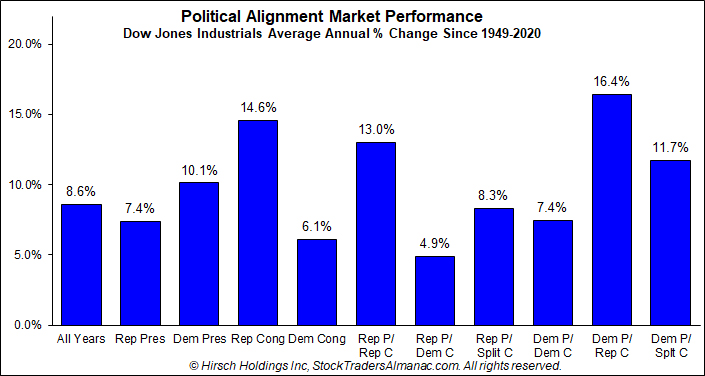 The other political cycle wrinkle to note is that we have change in party with a new, first year Democratic President. There are limited data points here as well with four. But they all came with democratic control of Congress and significantly higher performance for the S&P 500, averaging 10.6% with a median gain of 15.1% versus 7.0% for the average post-election year since 1949. The only loss came during Jimmy Carter’s first year that was saddled with the rampant stagflation of the late 1970s.

We have concerns about the slow vaccine rollout, high unemployment and new jobless claims, and the lagging service/restaurant sector and travel/leisure industry. As detailed on page 32 of the new 2021 Almanac, there is also the Post-Election Year syndrome, where we have historically paid the piper with a long history of bear markets, wars and foreign fiascos plaguing the Post-Election Year. But we are encouraged by the low rate environment, more fiscal stimulus and tame inflation. We suspect pent up demand to be unleashed later this year that should alleviate any market or economic setbacks we may experience in 2021.
ETF Trades & Portfolio Updates: Small Caps & Financials Surge Higher
Based upon the NYSE ARCA Natural Gas Index (XNG) there is a seasonal tendency for natural gas companies to enjoy gains from the end of February through the beginning of June. Detailed in the Stock Trader’s Almanac 2021 on page 92, this trade has returned 13.8%, 11.5%, and 19.3% on average over the past 15, 10, and 5 years respectively. Seasonal strength can be seen in the following chart, highlighted in yellow. 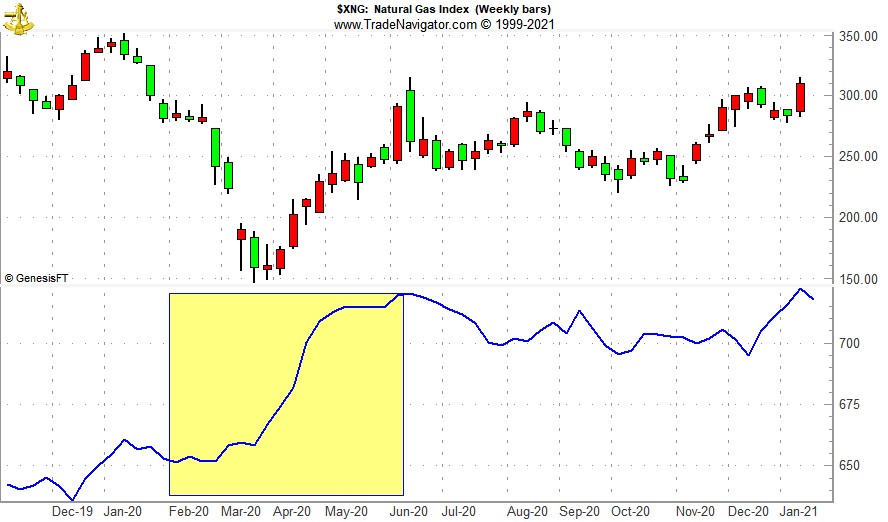 One of the factors for this seasonal price gain is consumption driven by demand for heating homes and businesses in the cold weather northern areas in the United States. In particular, when December and January are colder than normal, we see drawdowns in inventories through late March and occasionally into early April. This has a tendency to cause price spikes lasting through mid-April and beyond. Crude oil also has a tendency to rise during this timeframe in anticipation of the summer driving season.
Natural gas and crude oil prices both plummeted last year as the global pandemic significantly cut demand. Prices have recovered as lockdowns eased and economies have recovered, but not fully as the pandemic continues. As vaccine rollout accelerates, energy demand is also highly likely to improve. The increase in demand also appears it could arrive when supplies may be under pressure by a new administration in the White House and production cuts from OPEC.
First Trust Natural Gas (FCG) is an excellent choice to gain exposure to the company side of the natural gas sector. FCG could be bought on dips below $10.00. Once purchased, consider using an initial stop loss of $8.40 and take profits at the auto sell, $12.52. Top five holdings by weighting as of yesterday’s close are: Diamondback Energy, Devon Energy, Apache Corp, Occidental Petroleum and Hess. The net expense ratio is reasonable at 0.6% and the fund has approximately $117.7 million in assets. 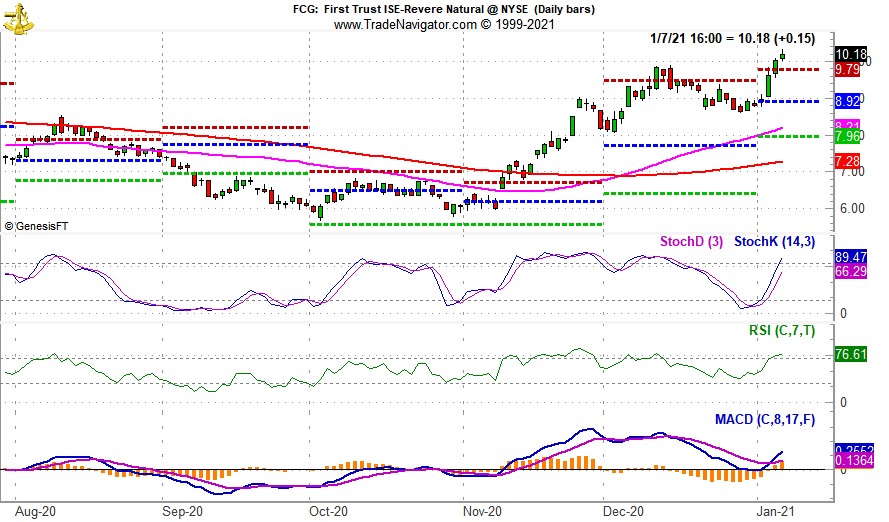 Sector Rotation ETF Portfolio Update
Broad market strength in November and December has continued into the New Year and the overall Sector Rotation Portfolio has benefited nicely. Nearly every position in the portfolio is positive. The lone exception is iShares Silver (SLV). As is often the situation, the portfolio has its leaders and its laggards. Since our November 5 Seasonal Buy signal the best performing position has been SPDR Financials (XLF), up a solid 21.5%. iShares PHLX Semiconductor (SOXX), SPDR industrials (XLI) and SPDR Materials (XLB) are all up double-digits. Vanguard REIT (VNQ) is the laggard, up just 2.9% (excluding dividends and fees).
Last month’s Seasonal Sector Trades ideas targeting seasonal strength in copper have been added to the portfolio. United States Copper (CPER) and Global X Copper Miners (COPX) were added in mid-December when both broke out above projected monthly resistance. CPER and COPX are on Hold.
Last month’s trade aimed at oil stocks, SPDR Energy (XLE) has also been added to the portfolio. XLE is on Hold.
With the exception of the new trade idea, all other positions in the portfolio are currently on Hold. Many positions have enjoyed solid gains and the broad market is headed toward a seasonally soft patch that can last from mid-January into early February. Please see table for updated buy limits and stop losses.

Need to Know: Bigger stimulus? Here’s why now may be seen as the ‘peak of this bubble,’ warns strategist