Market at a Glance – 11/24/2020
11/24/2020: Dow 30046.24 | S&P 3635.41 | NASDAQ 12036.79 | Russell 2K 1853.53 | NYSE 14249.50 | Value Line Arith 7612.43
Fundamental: Mixed. Vaccines are nearly ready, but distribution still remains a challenge. And as we await an approved vaccine, Covid-19 cases are surging, triggering new shutdowns and economic easing rollbacks around the country. As a result unemployment and weekly initial jobless claims remain elevated. The housing market remains firm, but the migration driving gains is likely to slow. Corporate earnings have largely held up in industries and businesses that remained/remain open. More importantly, the outlook continues to improve, and the market is rising because of this.
Technical: Breaking out. DJIA, S&P 500 and Russell 2000 have all broken out to new all-time closing highs. NASDAQ is close and a breakout by it would be bullish confirmation. NASDAQ has been held back as traders and investors pulled back from this year’s pandemic success stocks in favor of names best positioned to benefit from a vaccine. Today’s broad rally included NASDAQ and could be an early indication that the rally is gaining momentum.
Monetary: 0 – 0.25%. As expected, the Fed’s November meeting announcement did take a back seat to election results as little new was said and no changes to policy were made. However, in the time since that meeting Treasury Secretary did announce that he did not intend to renew or extend the Fed’s Main Street Lending, municipal lending and corporate credit programs. They were and still are set to expire at the end of the year. All three programs were established as part of the Fed’s COVID-19 response earlier this year.
Seasonal: Bullish. December is now the number three S&P 500 and DJIA month since 1950, averaging gains of 1.5% on each index. It’s the top Russell 2000 (1979) month and third best for NASDAQ (1971) and Russell 1000 (1979). The “January Effect” of small-cap outperformance starts in mid-December. Wall Street’s only “Free Lunch” of distressed small- and micro-cap stocks making new 52-week lows on December Triple-Witching Friday will be served before the opening bell on December 21. Santa’s Rally begins on Thursday December 24 and lasts until the second trading day of the New Year. In years when Santa Claus did not come to Wall Street, bear markets or sizable corrections have often materialized in the coming year.
Psychological: Elevated. According to Investor’s Intelligence Advisors Sentiment survey Bullish advisors stood at 59.6%. Correction advisors stood at 22.2% while Bearish advisors were at 18.2% in the most current report from last week. There was a brief dip in bullish sentiment at the end of October, but it did not stick as the market quickly rebounded. Historically, holiday and yearend cheer have translated into market gains and high levels of bullish sentiment so it would not be surprising to see the same again this year and possibly even higher levels of bulls as positive vaccine news breaks.
December Outlook: Yearend Rally Powers Ahead
Stocks have been on the rise since the late-October lows in prototypical market seasonality fashion, though NASDAQ has lagged a bit. Honestly, NASDAQ tech stocks deserve a break, they have carried the market for months now as they have driven and supported the stay-at-home economy. This rotation into the reopening-economy big cap stocks and the new highs in the Russell 2000 small caps, which are more domestic-based firms, is encouraging.
The Russell 2000 index of small cap stocks is on a tear, up 20.5% for November alone and hitting a new all-time high in the process. DJIA is running a distant second for November, though up an impressive 13.4%. S&P 500’s 11.2% and NASDAQ’s 10.3% month-to-date gains are nothing to scoff at either. These are top-20 monthly percent gains of all time for DJIA and S&P 500 – 3rd best DJIA November and #1 S&P November; and NASDAQ’s 31st best month and 4th best November. And last but surely not least, if these gains hold, it will be the Best Russell 2000 Month of all time. 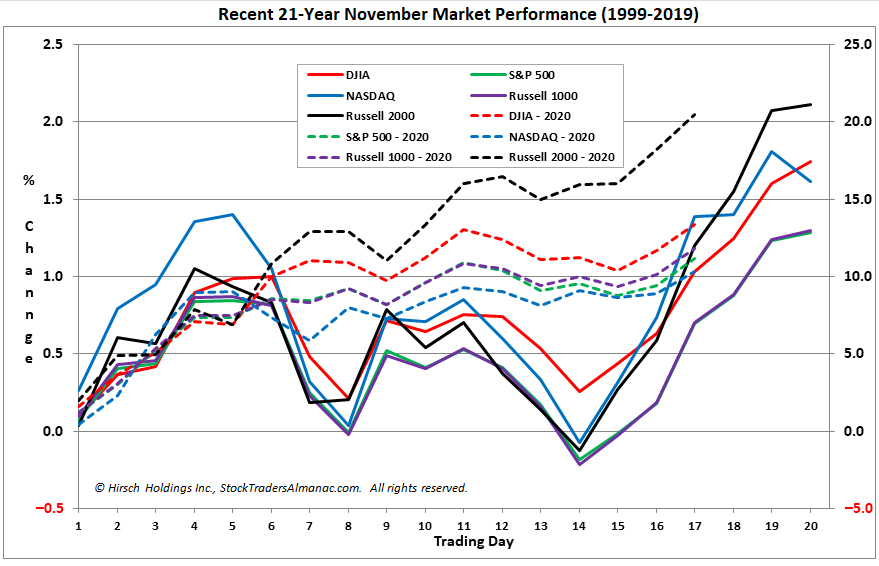 As of today’s close, from the close on November 5, 2020 when our Best Six/Eight Months Seasonal MACD Buy Signal triggered, the major indices are up respectably as well: DJIA +5.8%, S&P 500 +3.6%, NASDAQ +1.2% and Russell 2000 +11.7%. This continues the return of seasonality we discussed last month. November’s seasonal upside bias is quite clear in the updated chart here of S&P 500 for 2020 (right axis) overlaid on the One-Year Seasonal Pattern since 1950 and 1988 (left axis).
November 2020 strength comes on the heels of the perennial September and October weakness we experienced this year, which tracks historical pattern over the past 70-year and 32-year timeframes. With some vision now in the rearview mirror it appears S&P has made a classic late-October low. This October low was also a slightly higher-low than the September low and forms an uptrend line of support.

Before we get too far ahead of ourselves, it pays to remember that the first half of December is often weaker than the latter half, which is also when small cap stocks begin to outperform large caps (the old “January Effect”, not to be confused with our January Barometer). However, Russell 2000 November gains may be difficult to outdo.
Then there’s the usually strong Triple Witching Week and Week After. Triple Witching Friday, December 18 is also the close we use to select our annual basket of “Free Lunch” stocks making new 52-week lows. That list is emailed to subscribers over the weekend before the Open on Monday.
Our Santa Claus Rally (SCR) begins on Christmas Eve, December 24. The SCR is the last 5 trading days of the year and the first 2 of the New Year and is the first indication of the year to come. To Wit: “If Santa Claus should fail to call, Bears may come to Broad and Wall.
Yearend bullish seasonality is being buoyed higher by vaccine optimism and news that the Trump administration has officially authorized the Biden transition. And the market seems to be pleased with how Biden has been preparing his administration and his cabinet selections. There is also renewed hope for another stimulus package. We are encouraged by how resilient the market has remained in the face of rising COVID-19 cases – a testament to the promise of the medical solutions on the horizon and that we are better prepared for any new economic restrictions. The stay-at-home economy seems to be fusing with the reopening economy and this is positive for the market going into yearend and 2021.
Pulse of the Market
Octoberphobia did not spill over into November this year as DJIA rallied over 800 points (1) on the first trading day of November which was also the day before Election Day this year. Broad strength persisted through the election and into mid-November. On the close of November 5, our Seasonal MACD Buy signal was triggered (2) and we issued an email Alert. As of noon today, DJIA has advanced to over 30,000, up approximately 5.7% since our buy signal. 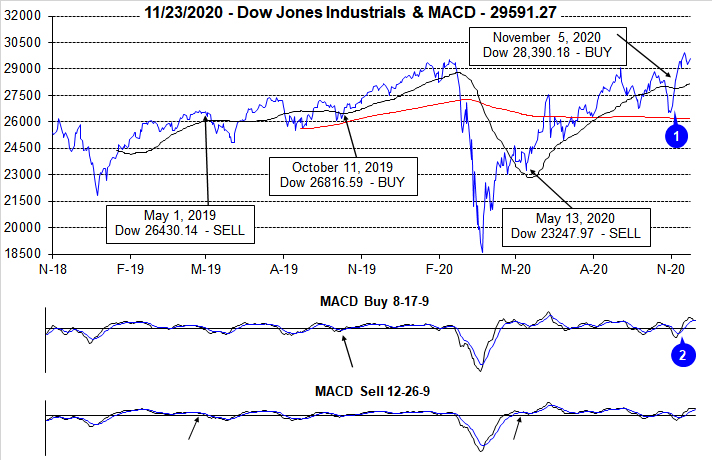 Historically, market strength around election time and in November is common as the removal of uncertainty over who will occupy the White House for the next four years appears to be more important than who is actually in power. Positive COVID-19 vaccine news has also helped outset surging cases and perhaps given a lift to everyone’s spirits and outlook. This is contributing to typical, bullish holiday and yearend seasonality. This is further evidence that seasonality still exists and was only suppressed by the pandemic.
Ever since the late-October Down Friday/Down Monday, DJIA has enjoyed solid gains on Mondays for four straight weeks (3). Since DJIA bottomed on Monday March 23, Monday has been the best day of the week up 26 of the last 35. Average Monday DJIA gains have been 0.83% with a total point gain of 6795.28. S&P 500 and NASDAQ have similar records over the same period with average gains of 0.74% and 0.88% respectively.
DJIA, S&P 500 (4) and NASDAQ (5) all had their second-best weekly percent gains in a November this year. Only the final full week in 2008 was stronger since 1950 for DJIA and S&P 500 and since 1971 for NASDAQ. Absent from the table, but perhaps even more bullish is the performance of the Russell 2000 small cap index this month. After lagging the other major indexes since August 2018, the Russell 2000 has surged over 20% this month and closed at a new all-time high multiple times.
Market breadth measured by NYSE Weekly Advancers and NYSE Weekly Decliners (6) has been positive as the market has climbed higher. Advancers have outnumbered Decliners by a robust margin over the last three weeks. This broad participation in the rally is bullish and suggests the rally can persist.
DJIA, S&P 500 and Russell 2000 have broken out to new all-time closing highs. NASDAQ is just below its old all-time high. As a result, Weekly New Highs (7) have expanded to their highest level since February of this year during the week ending November 13. Weekly New Lows have also declined to the lowest levels since August. Continued expansion of Weekly New Highs is a bullish trend.
Even as stocks have moved higher, the 90-day Treasury rate dipped to its lowest weekly level since the end of March (8), when it was briefly negative. The dip was minor, but it did help widen the spread between it and the 30-year Treasury rate. The spread has grown to its greatest size since February 2018 over the last five weeks. An expanding spread is generally a positive for banks and financials which could give the lagging sector a boost.
Click for larger graphic…

December Almanac: Small Caps Shine, Free Lunch Served, and Santa Visits
December is now the number three S&P 500 and Dow Jones Industrials month since 1950, averaging gains of 1.5% on each index. It’s the top Russell 2000 (1979) month and third best for NASDAQ (1971) and Russell 1000 (1979). In 2018, DJIA suffered its worst December performance since 1931 and its fourth worst December going all the way back to 1901. However, the market rarely falls precipitously in December and a repeat of 2018 is not highly likely. When December is down it is usually a turning point in the market—near a top or bottom. If the market has experienced fantastic gains leading up to December, stocks can pullback in the first half of the month.
In the last seventeen election years, December’s ranking changed modestly to #2 DJIA, #5 NASDAQ, but S&P 500 remains #3. Small caps, measured by the Russell 2000, have had a field day in election-year Decembers. Since 1980, the Russell 2000 has lost ground just once in ten election years in December. The average small cap gain in all ten years is a solid 3.0%. The Russell 2000’s single loss was in 1980 when the Prime Rate was 21.5%. 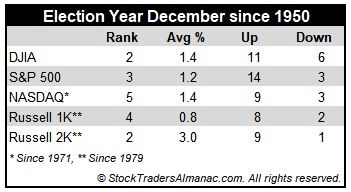 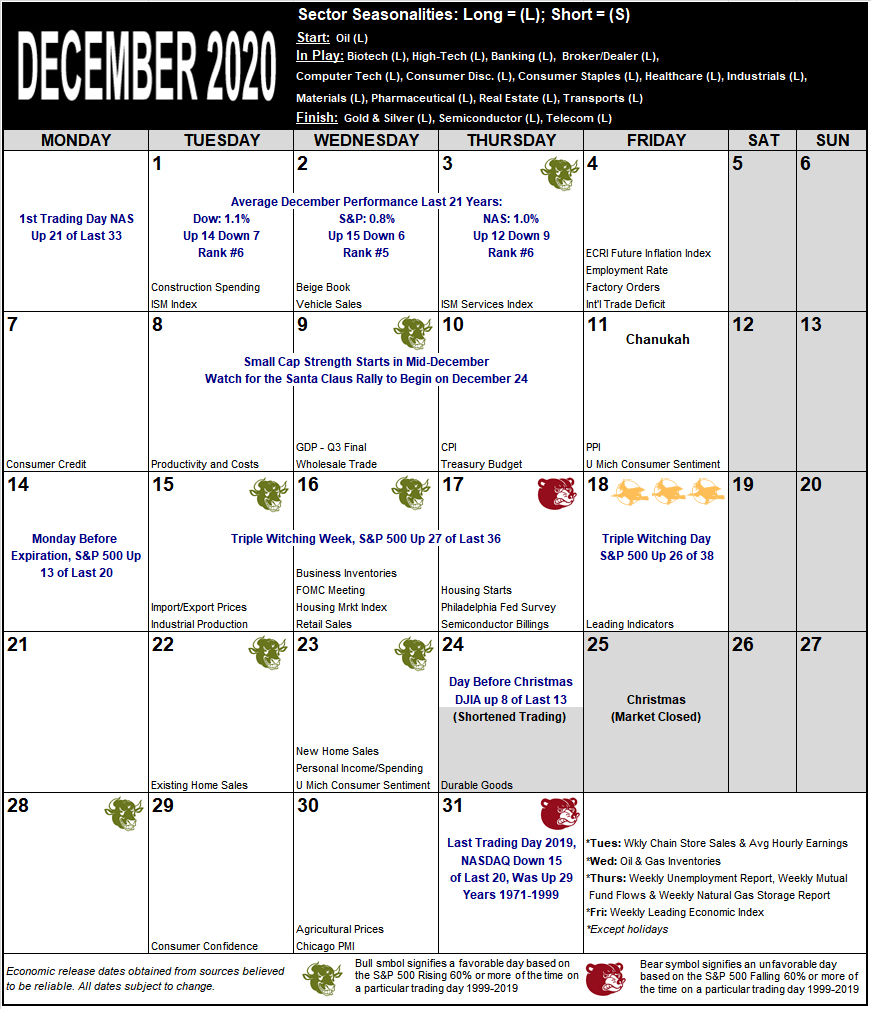 Pursuant to the provisions of Rule 206 (4) of the Investment
Advisers Act of 1940, readers should recognize that not all recommendations
made in the future will be profitable or will equal the performance of any
recommendations referred to in this Email issue. The information presented
in this Almanac Investor has been obtained from sources believed to
be reliable, but its accuracy is not guaranteed. The security portfolio
of the editor, its employees, or affiliated companies may, in some instances,
include securities mentioned in this Alert. Additional
disclosures can be found at www.stocktradersalmanac.com.

To unsubscribe
to Almanac Investor, please contact a Customer
Care representative by phone. To update or change your account information,
please visit www.stocktradersalmanac.com,
log-in and go to My Account.

MarketWatch: Is the stock market open on Wednesday, Thanksgiving and Black Friday?