by Contributor
in Private
0 0
0
14
SHARES
98
VIEWS
Share on FacebookShare on Twitter
ETF Trades: Eyeing Biotech and Technology on Dips

July’s employment situation report, normally released on the first Friday of August, has largely been a market disappointment over the last twenty-one years. DJIA, S&P 500, NASDAQ, Russell 1000 and Russell 2000 have all declined a majority of the time. Average, historical performance on the day has been negative with NASDAQ declining the most on average, off 0.50%. Median performance is similar to average performance confirming weakness is not due to one or more outliners. Modest strength in seven of the last ten years has improved average performance as the prior eleven-year stretch was nearly all bearish. 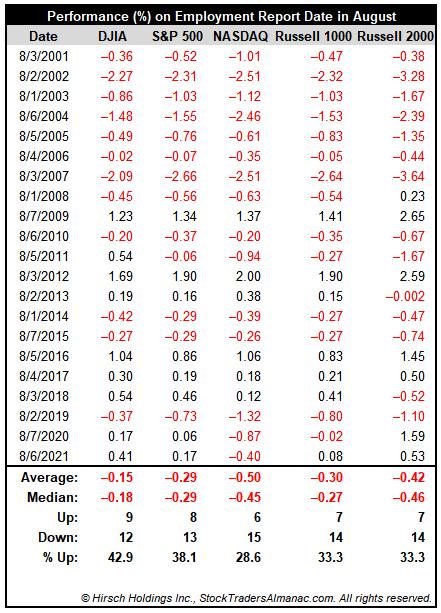 Consensus estimates for tomorrow’s jobs report are expecting 258,000 net new jobs were added in July. Excluding the losses reported in December 2020 and during the Covid-19 pandemic shutdown, this would be the fewest number of jobs since December 2019. This soft expectation for July does appear to be in line with the trend in weekly initial claims data that was released earlier today. Weekly initial claims were reported at 260,000 for the week ending July 30. This is nearly 100,000 more than were reported during March of this year. This trend also appears consistent with news of companies curtailing hiring and/or downsizing labor.
Historically, unemployment has been one of the last data points to rollover as the economy slipped into an official NBER recession. Although not officially there yet, employment data does appear to be trending in that direction making tomorrow’s jobs report all that much more significant. Better than expected numbers could easily keep the market’s current rally going while the opposite would only further tip the scales toward a recession. Given the full month of August has a tumultuous history a cautious stance still appears to be the prudent position at this time.
New Trade Ideas Based Upon August Sector Seasonalities
Although two new bullish sector trades begin in August, we will take a vigilant approach. Both new long trade ideas are suggested on dips. This is consistent with our near-term view that the market is likely to endure some additional weakness during the balance of the third quarter and possibly into Q4. We are also still looking for and awaiting a typical midterm bottom ahead of the Sweet Spot of the four-year cycle.
Biotechnology sector enters its historical favorable season in August. iShares Biotech (IBB) could be considered on dips below a buy limit of $112.00. An initial stop at $98.50 is suggested. The auto sell is $139.83 based upon historical average performance. A 13.5% average gain has occurred over the last 15 years while an average gain of 10.4% has taken place the most recent 5 years. Top five holdings are: Amgen, Gilead Sciences, Vertex Pharmaceuticals, Moderna and Regeneron Pharmaceuticals. 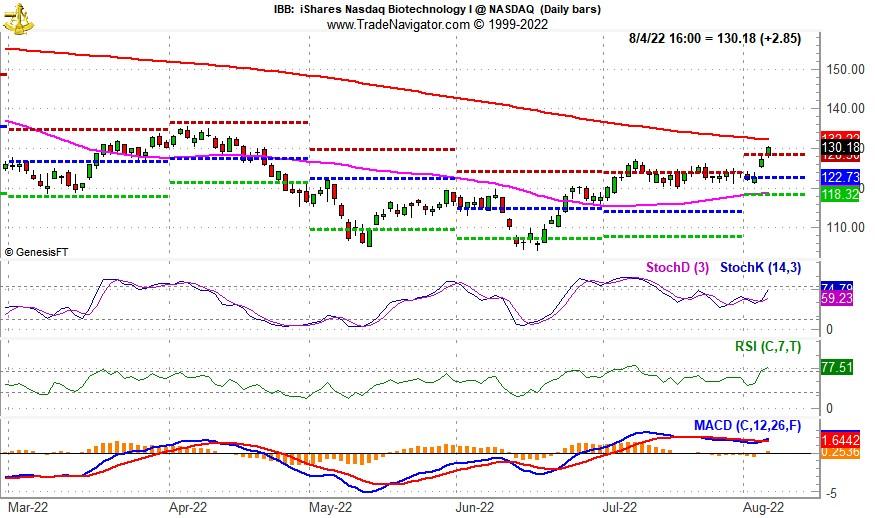 Over the last 15 years, High-Tech has generated an average return of 11.2%, and for the last five years the average has been a solid 17.6% during its bullish season from mid-August to mid-January. Our top ETF within this sector is iShares DJ US Technology (IYW). Set a buy limit of $85.75 and an initial stop loss of $77.18 if purchased. Should high-tech produce above average gains, profits will be taken at the auto sell of $104.89. IYW’s top five holdings are: Apple, Microsoft, Alphabet Class A & C shares and Nvidia. These five holdings represent 50.52% of IYW’s total holdings. Despite a challenging year thus far, technology is likely to resume its leadership role later this year. 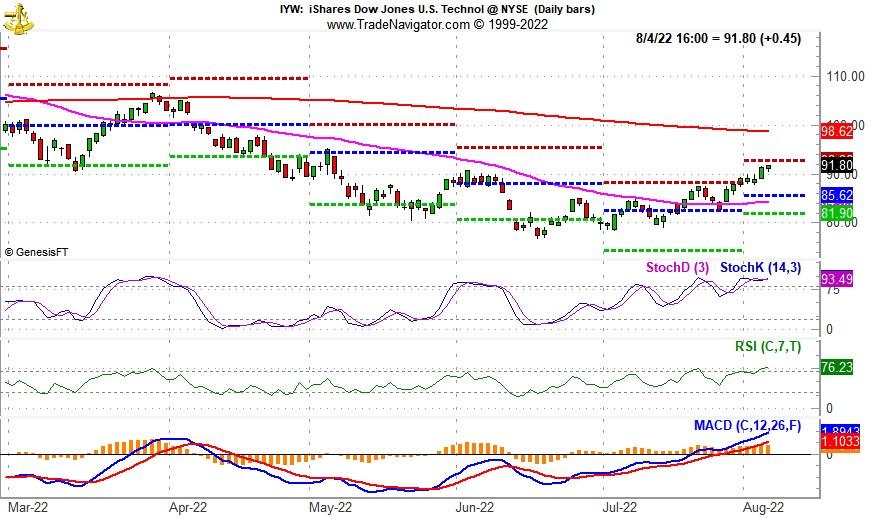 August’s final new trade idea is a short trade in the Semiconductor sector. Over the past 15 years the Semiconductor index (SOX) has declined on average 3.8% from the middle of August through the end of October. More recently, over the last five years this trade has not been all that successful with an average 0.7% gain. The combination of reported chips shortages and a consumer cutting back on discretionary spending makes it difficult to predict where the sector goes next, but worldwide shipments of PC, tablet and mobile phone chips are forecast to decline this year.
Given the elevated level of uncertainty currently shrouding the semiconductor sector, we are going to avoid using a leveraged, inverse ETF and instead consider establishing a short position in iShares Semiconductor (SOXX) near resistance at $432.00 or on a breakdown below $400.00. If shorted near resistance set an initial stop at $444.96, if shorted on a breakdown set a stop at $412.00. Top five holdings of SOXX are: Nvidia, Broadcom, Intel, Texas Instruments and Advanced Micro Devices. 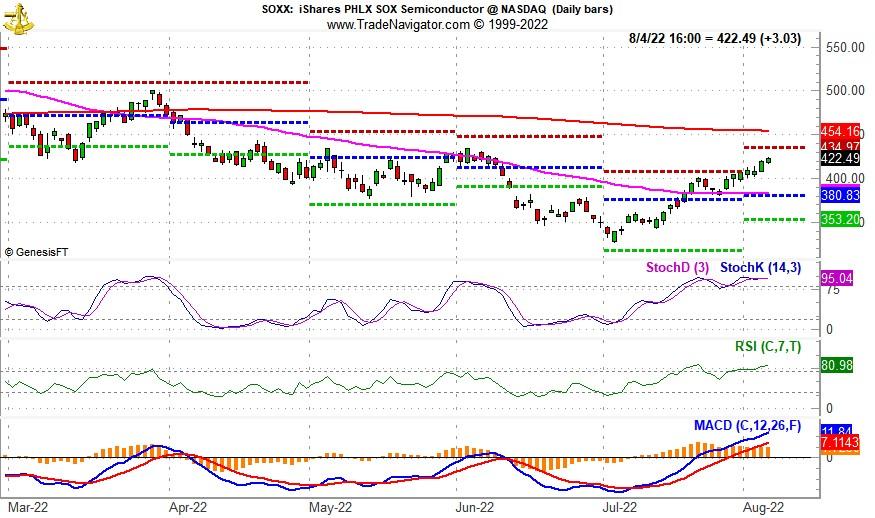 Sector Rotation ETF Portfolio Updates
The summer doldrums and the worst two-month span (August-September) of the year have arrived. Thus far it doesn’t really look or feel like it with the market maintaining its sizable gains from July. Last month’s trade ideas shorting the transport and industrial sectors have been added to the portfolio. iShares Transportation (IYT) was shorted on July 28 when it traded below $226.25. SPDR Industrials (XLI) was shorted the prior day when it traded above $92.10. Currently both positions are modestly underwater as they continue to creep higher.
Recent declines in crude oil price have undoubtedly contributed to recent strength in transports and industrials, but energy supplies remain tight and spare capacity is still limited. This suggests persistent energy declines are not highly likely. With a rebound in energy prices possible, we are going to increase the stop loss on the short IYT position to $240.00. Since all stops are based upon closing price, we will not close out IYT unless it closes above this new stop loss.
SPDR Biotech (XBI) has rebounded nicely since last update. XBI is a long-term holding that we entered into a few months early. Nonetheless the increased awareness and focus on health and contagious disease that has transpired alongside Covid-19 is a continuous reminder of the importance and potential impact the sector can and does have on everyday life. With the arrival of biotech’s favorable season, XBI can be considered on dips below $78.20.
Please see table below for current advice, updated buy limits and stop losses.

Tactical Seasonal Switching ETF Portfolio Update
Although the debate continues as to whether or not the U.S. is in recession, Q1 and Q2 GDP readings were negative, and the Fed appears to be slightly less hawkish when it comes to future interest rate hikes. As a result Treasury bond yields have declined and the prices of TLT, AGG and BND have improved. Excluding dividends and trading costs, all three positions are modestly in the red. Should recession fears be supported by weakening economic data, TLT, AGG and BND could quickly improve further. TLT, AGG & BND are on Hold.

Danny’s View: How Long Can The Rally Last?

Danny’s View: Bulls Are In Control/Where To Buy The Dip