March 2008
Most traders can easily recall when cotton had its "Gamestop" moment.  A few days before the Mar 2008 notice, cotton was trading in the high 60s.  Several "dark money" players had studied what happens to niche markets when they transition from floor to electronic, and they pounced.  Cotton jumped from 68c to near 90c in 2 hectic weeks, with several days locking limit.  Futures locked at 9138, while options hit 110.00c in synthetics.  The basis moved from a normal -6c to about -18c, wrecking balance sheets on firms large and small.  More than a few old-line cotton firms went bankrupt, or closed soon after.  The ICE did little, and said little about this tragedy of manipulation.

When the Trump admin was formulating the Phase 1 of the new China trade deal, it was thought that pork and cotton would be the 2 most favored of ag markets for export.  Then China rebuilt their swine herd much faster than thought possible, pushing soy and meal into the most favored status in spring and summer.  Lately its been corn that has been the darling of the ags, with record weekly purchases.  We have increased exports on cotton's balance sheet to more fairly account for where cumulative sales and shipments stand now, and have whittled another 150 kb off production.  Carryout looks closer to 4.0 Mb than it does to 4.5 Mb, which puts the ratio at 23%.

Bloomberg ran a survey of new crop acres, arriving at 11.5 M, down 5%.  This sounds like a reasonable reduction, as soy beats cotton, and corn/sorghum also win by a little.  But nothing is said about all those dryland acres in TX and whether or not they make a comeback.  Also worth noting is the huge storm that just dumped several inches of snow and rain on Cal and AZ.  If it rains in TX sufficient to plant dryland, then all of these acreage estimates will get scrambled.

Balance sheets have tightened dramatically as this year wore on, partially due to weather issues, partially to China's restocking, and partially due to the decline of the $.  As this was written, the $ is threatening to break out and break up through key  resistance at 9100, and possibly confirm a major low.  The $ touched 9100 today at 1100 and was poised just below as this was written at 1230 cdt.  It may be premature, but a 38% retrace of the entire move from the Mar high is 9480, which coincides with an intermediate and 4 wave high in Sep.  The 50% retrace is 9650. 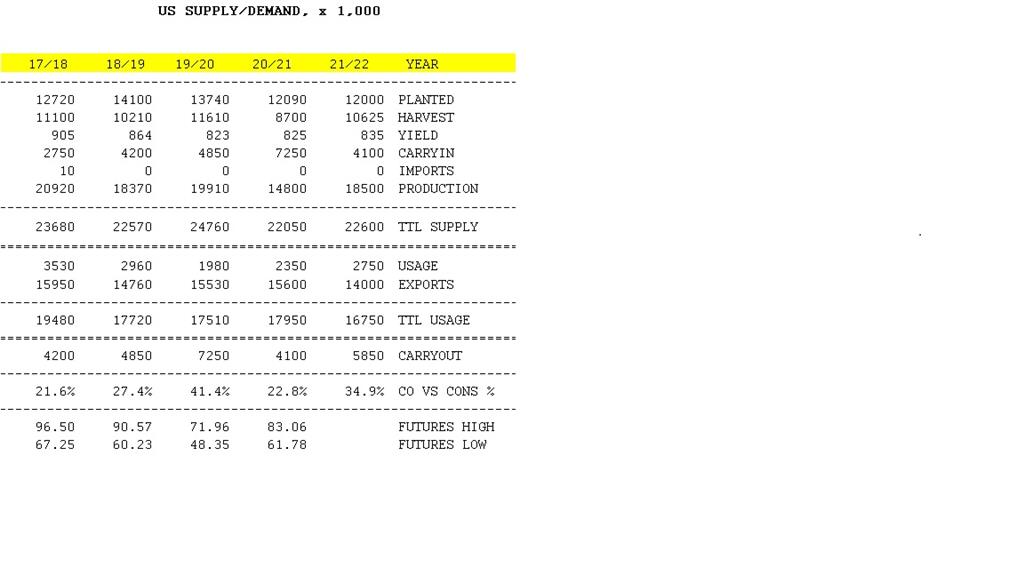