In Like A Lion
Whoever came up with the phrase that March come "in like a lion" was right for this March, and this year.  The South has be jolted by weather recently, with snows, freezes, record cold and all things that come with that.  W TX has been hammered since last July with a drought that has yet to relent.

Mother Nature has been much kinder to Australia this year, and while rains have not been perfect, farmers there can count on average conditions going into harvest.  Just 2 years ago the Aussies faced production of only 630 kb, and this year can easily quadruple that, or more.

Allenberg Chief Nicosia spoke at the Gin show in Memphis today, and while we have not yet its entirety, traders took it as bullish.  More on the speech tomorrow.

COT reports indicate specs and funds have pushed up their net longs to about the 75% decile between record short and record long.  Index funds are up to the 80% decile, and swap dealers are roughly 50%.  There is still room to add to longs for the specs, and open interest is well below the level on the last visit to the mid 90s.

Regards the $, it has been in a well-defined range for 3 months, but is pushing against the upper boundary of 9160.  Today's price was 9112 as this was written, 1230.  A break above 9160 could prompt one of those so-called "risk-off" trades, for everything.  Also noted is the track of the CRB, which has been repulsed at the 500 area, price where highs were made in May and Oct 2018.  This area also holds a high in 2006, and an intermediate low in 2010.  The CRB has basically doubled its price since the major low of 227 in April.  Momentum has turned down. 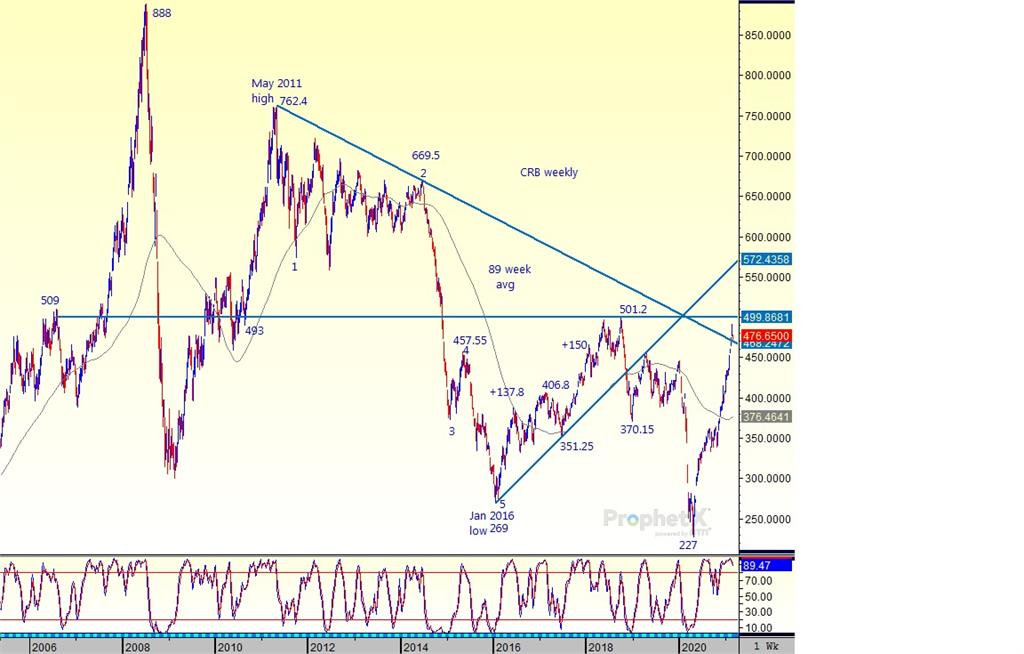