The 5 MB Disaster
Our estimate, based on recent classings, was that the US would lose another 1/4 Mb, possibly as much as 1/2 Mb.  But in no way, shape or fashion did we see a 1 Mb cut.  More adjustments downward came from the "hurricane" states, while the cowboy states of TX and OK kept searching for a bottom in yield and abandonment.  One issue we have had with discerning classing data is the late harvest.  That was running a month behind normal, pushing classings back too, and there was not much to indicate the crop had lost this much ground.  The US has lost right at 5 Mb from the beginning of the market year, stunning.

Exports came in right at our figure, and the export/total supply ratio now sits at 69%.  This is 2nd highest all-time, just behind the 16/17 year at 71% when the US shipped 14.92 Mb.  This will be the figure most likely to change in coming months, as production is probably set.

The US report was such a stunner not much attention was paid to world numbers.  End stocks dropped 1.2 Mb, mostly due to the US.  Pak lost another 200 kb, and is now importing more than what they produce, a rare year.  This country is much like TX this year and recent years, getting pounded by insects and poor weather.

We find the end stocks and ratio of 26% to be close to a "fair" price for cotton, even if price is somewhat high.  There were 2 years with identical ratios in 04/05 and 05/06, but price boxes then were mired in a zone with a high $, and highs then were only 61c and 58c.  In 14/15 and 15/16 ratios were 24.3% and 30%, with highs at 71.5c and 75.1c.  In 18/19 the ratio was 27.4% with a high of 90.6c, but this high came on the first day of the market year, reflecting more of the previous year.  The low that year occurred in the last month at 60c.  The world carryout has slipped to "only" 83%, which is 4th highest all-time.  End stocks of 96 Mb are also 4th highest.  The price discovery depends much on where stocks are, as the US is by far the most influential in this.  India is sitting on a carryout double their normal level, but so far this massive amount of cotton has not impacted price.  Lastly, new crop ratios indicate cotton will lose slightly to corn and soy, but not much.

The Mar continuous chart indicates this week is the 21st new high since the Apr low.  Same for the continuous Dec.  The spot continuous indicates this is the 20th week of new highs.  Next week falls on a Fib 233 count from a major high in Aug 2016.  We find no price objective of consequence nearby, and there is no indication of a reversal. 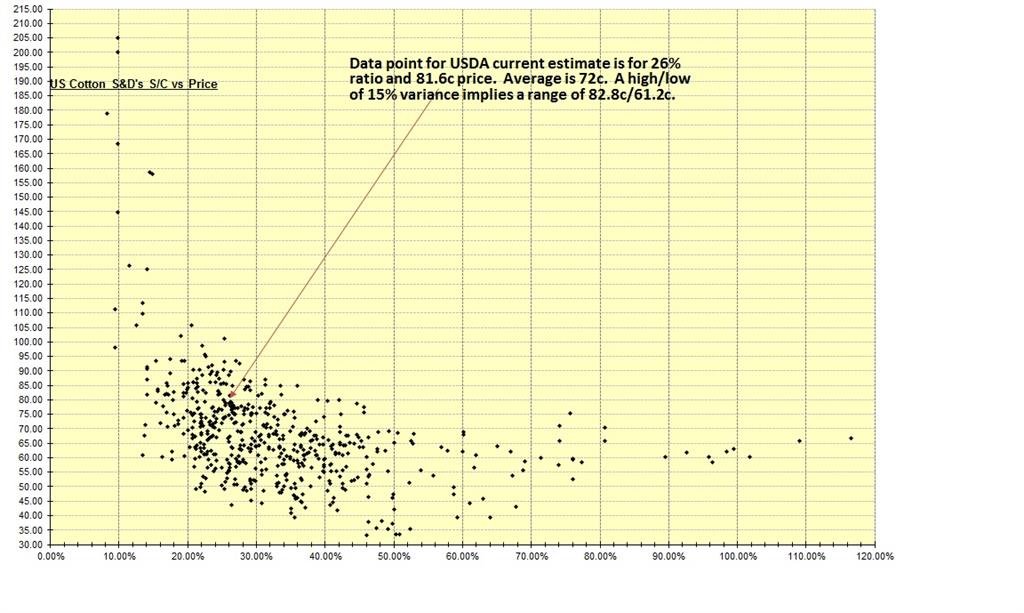