It's Simple
Forget about tomorrow's report, or the battle over acres, or the weather.  Things just got real simple if you are a cotton trader.  It's the $, 1st, 2nd and 3rd.  The $ made a major low right in time for its most reliable seasonal of the year, and has dutifully bounced enough to confirm at least a minor, and likely an intermediate low.  Momentum has turned north, and the public is at record long.  The other market that cotton follows like a duck on a junebug is copper, and it has convincingly topped out, reversed, and has turned its momentum negative.  One other market of the crazy celebrity type, Bitcoin, has today purged itself of a full third of its value from the Fri high.  We have often thought this thing is sort of an anti-dollar play, but it is also the Tulip trade of modern times.  Imagine, losing a third of value in just a day and a half.  Margin call mania, come tomorrow morn.

Scanning the survey for the report, one group, or person, lowballed production by 850 kb.  Our estimate is 15.75 Mb, and that number has company.  One entity sees production + 50 kb, but we wonder if he has looked at recent classing reports.  Our end stocks estimate, plus a couple others, show a level that is roughly 2 Mb below summer reports.  This came about mainly due to a decrease in production potential, that in late spring was just north of 20 Mb.

COT reports show cotton net long specs have moved up to about the 70% decile, still a long way from record.  Index funds show they are holding more longs than the spec category, and are near the 85% decile.  Weather reports were accurate regards weekend snow/rain on the Llano Estacado.  That key area got the equivalent of 1/2" to 3/4" rain, most of it in the form of snow.  Nice, but much more is needed.  Regards the $, what is it exactly that has caused this rally, or bounce, or whatever?  Check out the 10 year treasury chart.  Spot has closed a gap left during the wild days of Mar, on 3/20, and yield has reached 1.11%.  That's up from the all-time low rate of 0.5%.  With inflation around 2%, its a mystery why anyone would buy, or own, US treasuries.  And to the horror of many politicians, the Fed does not, and cannot, control the 10 year.

Cotton is at the top of a list a major trade house says is very high on "the pain trade."  This is due to a large net long, and one that continues to grow.  Today's low is the first place that one could say the bull has failed, given a close below 7865.  Last week's low is 7825, another critical support point.  Regards the $, it rose above the 21 day avg, but stalled today at the 34 day avg (9062).  The $ shows clear divergence between price and momentum on the low of 12/17 and the low last week. 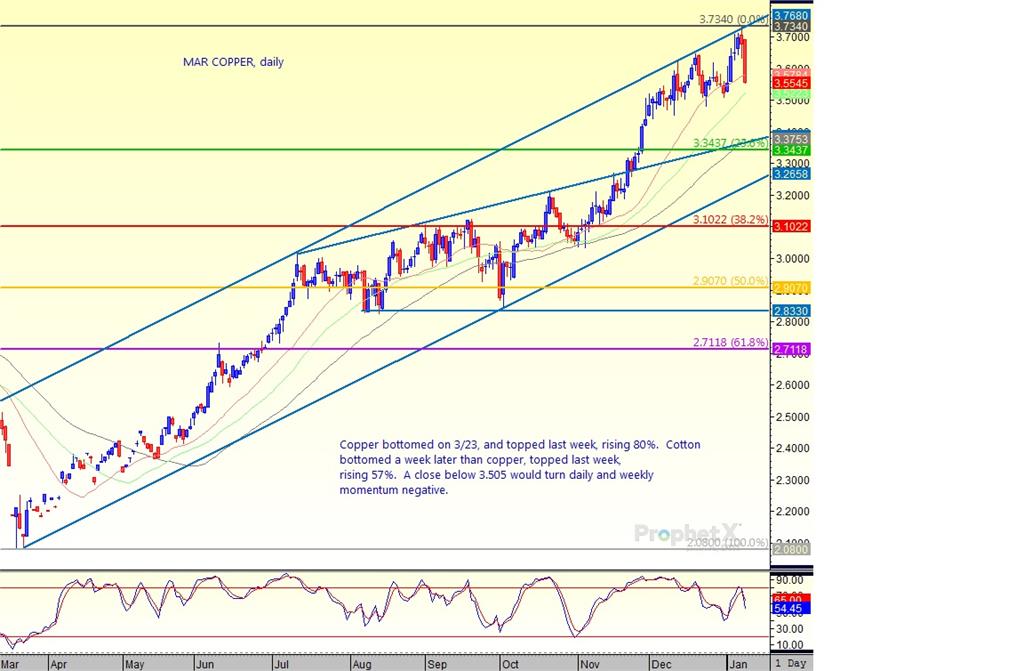 Bloomberg: Chart of the Day

Bloomberg: Chart of the Day