Higher in June
No matter what number comes out of the Outlook Forum, expect later estimates to show larger cotton acreage figures.  Cotton reached the highest level yet on the Mar 2022 ratio vs corn, and is near the highest level in 21 months on the spot ratio.  At 0.183 cotton is in the middle of a range with corn since 2013, so there should be no discernible shift, either way.  Cotton's ratio vs soy using the Mar 2022 contracts, is much the same as corn.  Cotton is near the high at 0.074 on Mar 2022, and is in the mushy middle of a range since 2013.  Same for wheat, even though there is no acreage give and take between cotton and wheat.

Consensus opinion holds that cotton acres will be much lower, as alternatives are better regards profits and returns.  Not now, not since cotton made a huge move up on the ratios from mid Jan.  Even though this Friday may show a cut in acres, cotton has pretty much eliminated any discount it held vs corn and soy in recent weeks.

Dec futures are trading a whopping $150/bale over loan, given a 3c basis.  We have previously recommended hedges at 73c, 77c, 81c, and again at 85c.  That gets total hedges up to 40% of production.  Without venturing a guess on new crop end stocks, the market is much too high for a farmer to go into planting without booking part of his crop.

Sales were scorching again at 306 krb, with China high at 99, Turk 2nd at 72, Pak 3rd at 52, and Viet 4th at 30.  Shipments were hotter, at 340 krb, and new crop sales were 4.  Rationing?  Not hardly, as John Wayne would say.  Anticipation of inflation, anticipation of a consumer party in 2021, and a shift of inventories from the US to Asia combine for the assault on 90c.  And, the Dec has crashed back into the acreage battle, easily competing with corn and soy.  If W TX can plant this year, total acreage could be 13.5 M.  If drought continues, it will be closer to 12.0 M.  The Outlook Forum will likely show a figure at 11.5 M, or lower.  That number is DOA. 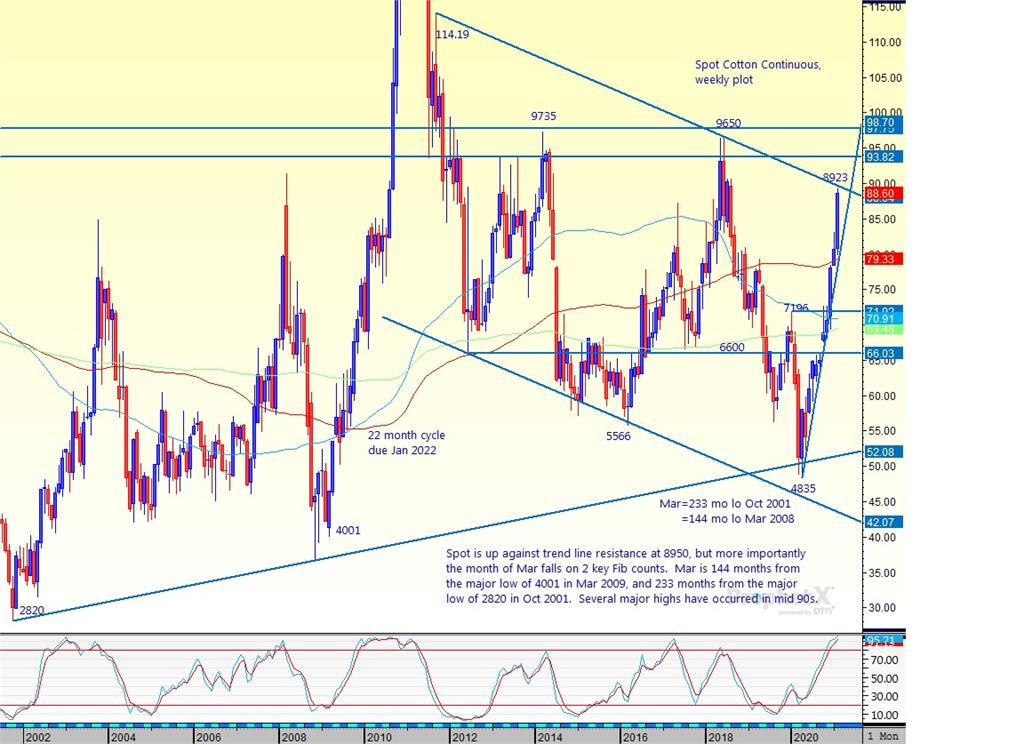