1984
A chart supplied by Gavekal indicates US household debt/assets ratio is at the lowest level since 1984.  That was when the US was digging out from 2 recessions in 2.5 years, and the low was made after Greenspan killed off inflation of 14%.  The consumer appears to be in nearly as much debt as Uncle Sam.

We find Rabo's price forecasts more than interesting, and push back on those that disparage their work.  In this business, when an analyst is willing to go out on a limb and put forth a forecast and an average for several months, he is open to being wrong and vilified by others.  Its fair game to criticize, but those that do must be willing to also lay bare their own numbers.  The $ has been flat for 7 weeks, since early Dec, and grain markets have that look of correction in the air.  Cotton has defied both sets of coattails, as it has rallied 17% since early Dec.  It has also recovered about half of the loss vs corn and soy since Oct.  The futures highs for new crop Dec from Christmas to end of Feb are:  6650 in Feb 2015;  6585 in Dec 2015;  7520 in Feb 2017;  7750 in Jan 2018;  7800 in Dec 2018;  7300 in Jan 2020.  The 79c print for spot Dec is the highest in 7 years.  Dec is fighting mightily to keep acres.

This market slices through technical objectives like warm butter, and has made mush of some old resistance for spot at 82c and Dec at 78c.  Below chart (from Dave Toth, RJO analyst) is that of spot corn continuous, a close cousin of cotton.  Current price may indicate a market near the end of a major 5 wave move up, from 310 to 540, +75%.  First sign of a real correction is violation of yesterday's low at 513. 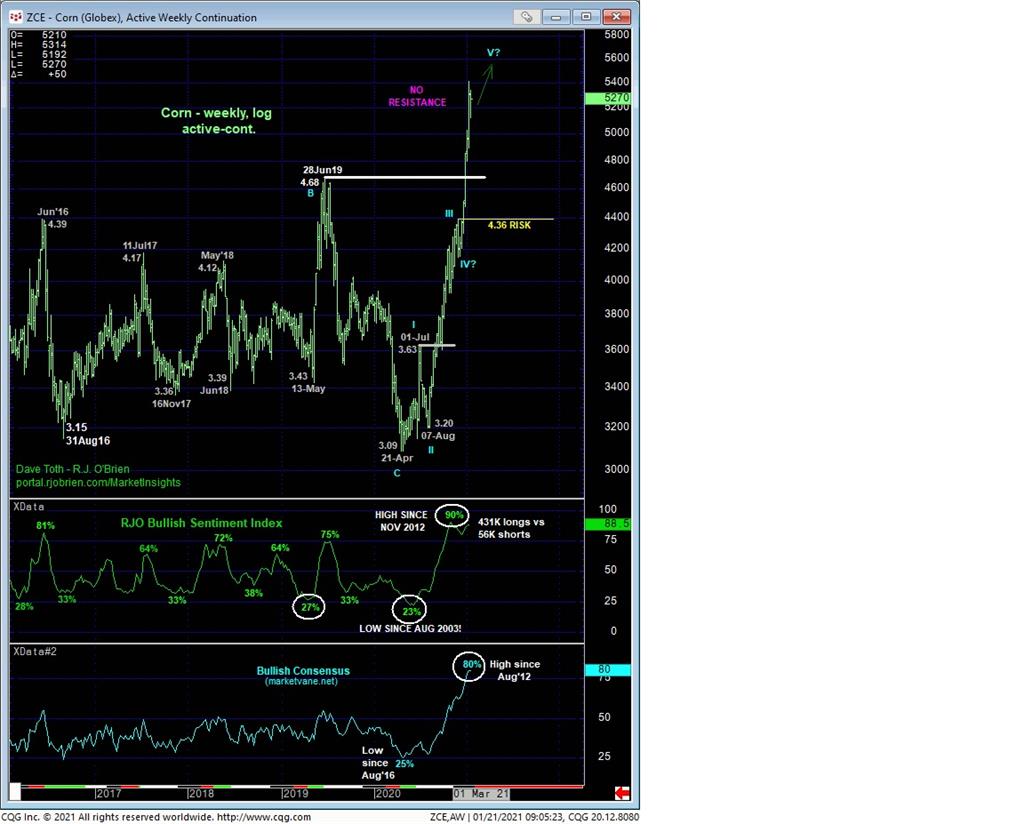