5 Weeks to Target
If sales keep hitting 300 krb/week, the US will have secured the target in 5 weeks.  Then what?  Unless the target is raised, this is going to be one big roll year.  Sales of 386 krb were best in 5 weeks, with Turk high at 66, Viet 2nd at 64, Pak 3rd at 63, and China in cleanup at 37.  New crop sales were also best in 5 weeks at 54 krb, scattered buyers.  Shipments at 288 krb were in line with figures since late Oct.  Without considering the roll, the US needs to sell only 66 krb/week to hit the target, and this week's shipment figure is dead center the target avg.

Cumulative sales are running tight with last year, which shipped 15.53 Mb (480#).  However, shipments are way out in front of all years for this week, and have been on a very stable line-slope, or pace since the year began.  If the shipment pace stays as it is, this year will match the same cumulative of the 10/11 and 05/06 years, in about 10 weeks.  The problem with comparing this year with those, is that 05/06 was distorted by the end of Step 2, and 10/11 was the crazy year in which price soared to +$2.  Disregarding 05/06, we note that the 10/11 year shipment pace cooled off dramatically in the last dozen weeks of the year, due to record prices.  Assuming the sales last year and this year will be identical at 18.155 Mb, and shipments this year will be better, say 15.75 Mb, the roll will be about 2.4 Mb.

Sales of corn and soy have been hotter than those of cotton, as the world appears to be restocking commodities.  Rising prices scare governments and end users to buy more and more, so as to keep a lid on the masses and make sure "the people" have corn to eat and cotton to wear.  In the here-we-go-again box, India's cotton areas in Punjab, Haryana, Madhya Pradesh and Maharashtra have all had a month of much below average rain.  Also of concern is Pakistan, coming off a disastrous year.  One confusing part of this market is in the spreads.  Mar/May is 70% of carry, and Mar/Jly is 61%.  May/Jly is 53%.  Then there is Jly/Dec, that is inverted at +460 points, which is roughly 425 points above carry.  We can't understand why there is so much carry from now to July, signifying adequate supply, then it goes upside down.


Today's low at 7985 matches the low on 1/12, so that is the breaking point to confirm a new direction.  Following comments and chart from Dave Toth, RJO tech analyst:
Overnight's failure below 20 Jan 8060 low and our micro risk parameter confirms a bearish divergence in very short term momentum.  This failure defines 21 Jan 8306 high as one of developing importance and a new micro risk parameter from which non-bullish decisions like long covers and cautious bearish punts can now be objectively based and managed.
For some ancillary but compelling reasons traders are urged to be on the alert for the early stages of a peak/correction/reversal environment that could be significant in scope until 8306 is taken out. 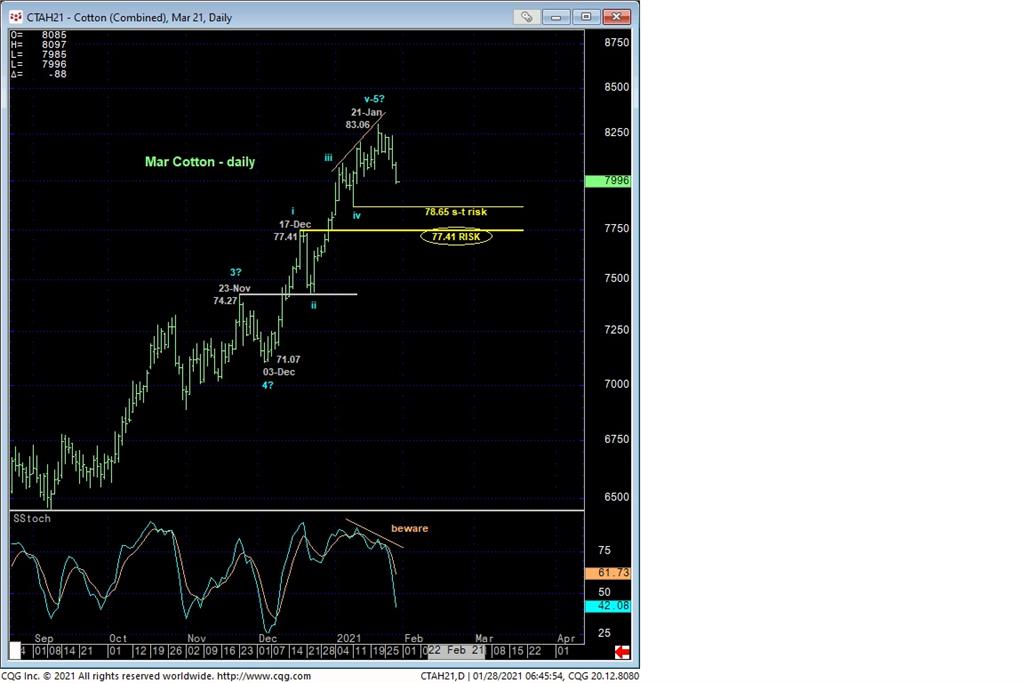 OP: Taking From the Rich?