It's All Relative
Before the Corona storm hit, spot futures traded 6675/7195, or avg 6935 for 2 months.  The carryouts for Dec and Jan were 5.5 Mb and 5.4 Mb, ratios were at 28%.  So how does one compare current price of 71c, to get the relative carryout based on year ago?  A straight-line comparison gets 5.58 Mb, all things being relative.  If we choose to equate price today to the ratio of last winter, the carryout must fall to 4.8 Mb.

There are some fundamental similarities with fall of 2019, as the crop was cut 900 kb from Oct to Nov, and carryout dropped same.  Price was 61c in Oct, rising to 72c in Jan.  Production dropped again in Dec by 600 kb, then got pinged another 300 kb in later months.

Regards the above numbers game, the market has priced in a much larger decrease in end stocks that any guess we have heard, from even the most rabid bull.  A crop of only 15.0 Mb along with an export ratio of 60% of supply gets exports of 13.7 Mb.  If we adjust the ratio to be set at 28%, a production of 15.0 Mb and exports of 14.9 Mb is calculated.  The ratio of exports vs supply rises to 67%, a little high, but not unprecedented.  This little exercise uses only last year as its relative comparison, and one has to assume that the market price in Dec/Feb was fair and accurate.  If it was, then this year's crop is about to collapse, or the price has to adjust downward.


A look at the soy market, as it has been a leader in the row crops.  Spot bottomed with cotton in early Apr, then took out two long term negative trend lines, one at 910, the other at 950.  Spot is up against long term resistance, between 1065 and 1095 there are 4 major highs, and 1 major low, going back to 2004.  There are also a couple of spike highs in 77 and 88.  This comes in the backdrop of record long net specs, and record high open interest.  So far, no top or reversal, but the spec position and the historical resistance do warn of that possibility. 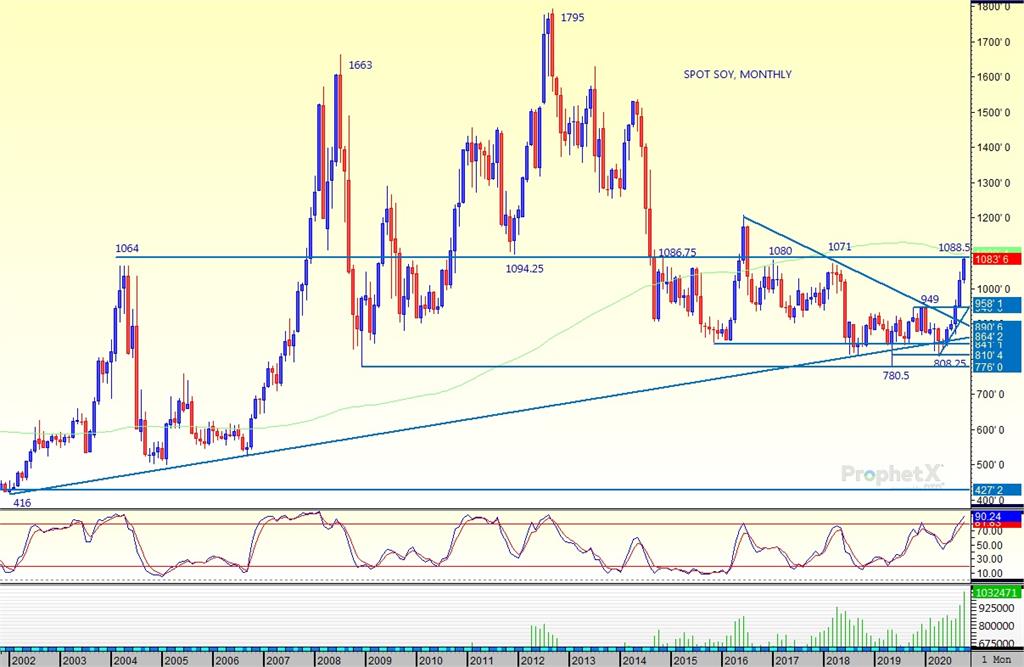 An iPhone for Every Wallet | The UN Turns 75

What usually happens when everybody expects the same thing….

What usually happens when everybody expects the same thing....