No Bull in the Numbers
The survey for the report is out, showing our numbers at the low for end stocks in both US and world balance sheets.  But we are not bullish, nor do we consider our figures bullish.  The production survey avg was lowered 1/2 Mb from Oct, but as we have said multiple times, the market is trading something more than that.  The end stocks avg was cut 400 kb, but again, the market says a bigger cut is in the works.

On the world side, we adjusted for a lower production, matching exactly our estimate for consumption.  This resulted in a carryout of 99 Mb, lowest of those surveyed.  But a 99 Mb is by no means bullish.  It is exactly the same as last year, and is tied for 3rd highest all-time.  The ratio at 87% is less than year ago, and is 4th largest all-time.

We don't know why the market rolled over today, but it appears we were right on the call yesterday to add to shorts.  Even though the $ was sharply lower, cotton is being influenced by normal liquidation into Dec notice.  Our 5.65 Mb US end stocks figure is a lot less than where things stood last May, but price then was 58c.  A "fair" value for a 32% ratio is ballpark 64c.  But that price must come with at least a 10% +/-, meaning a theoretical high/low of 7040/5760.  The observation of that price box suggests this year's high is in place, but the low is not.

The first leg down from 7260 is 454 points.  Subtract that from what may be a "b" leg high at 7094, get a target of 6640.  This is in the area of the key price level of 6600, which cotton has made important via several major highs and lows.  Timing for a low historically has been on or within a couple days of FND.  No surprise there. 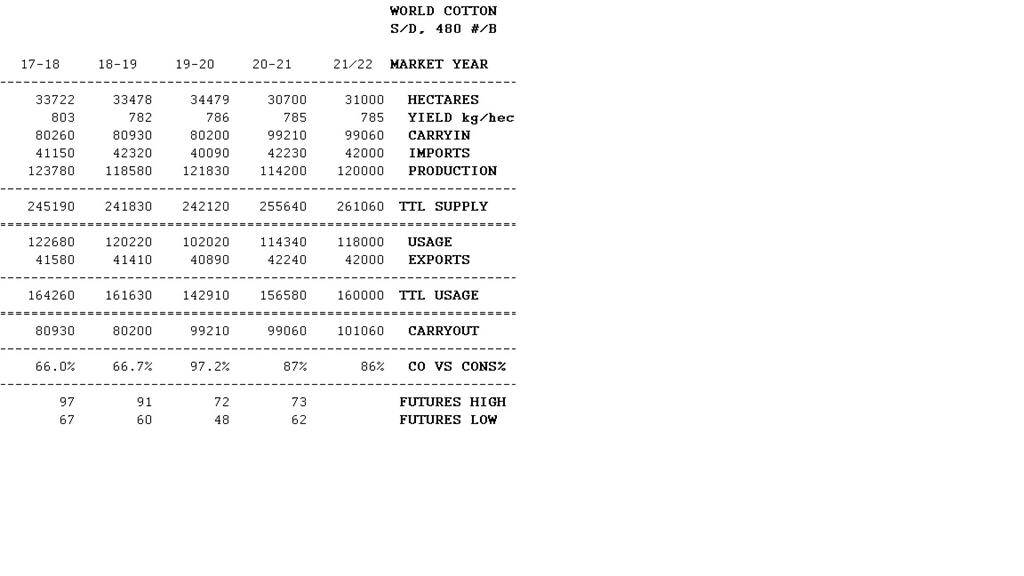