Beta Arrives Low
The slow-moving storm called Beta, has crawled from Houston up to the Delta, and is pouring rain on a crop mostly open, and mostly still in the fields.  It moves out late Thur, then goes on to aggravate farmers in the Carolinas.  This is not a major storm, but the Southern crop definitely does not want an event that will likely hurt grades.  Quantity losses will be minimal.  The market has mostly ignored Beta, and is likely looking to sales tomorrow for the next price mover.

Some dark clouds are forming in China over trade.  The Communist Party has developed a blacklist to target specific companies, in response to the US administration’s trade policies.  The recently formulated ban on Chinese exports of cotton textiles from Xingxiang and tomatoes is one example.  This blacklist is defined in China as “unreliables.”  That term reminds us of Hillary’s use of “deplorables” to describe Republican voters.

Last week’s sales were a surprise, our guess was 300 krb, and the actual was +150 krb.  Tomorrow’s number should be a good one, but we won’t embarrass ourselves again with a guess.  Stepping back a bit from the market, we find the current price is more or less in the vicinity of being fair, given a 12% decline in the $ from Mar high to Sep low, and a ~3 Mb decline in the US production.  No wonder price has risen 40% off what we think is a major, long term low, one that won’t be revisited any time soon.  But, there is a lot of room between 48c and 66c, and a lot of moving parts ongoing that will give the market some large gyrations.  Our bias is that a near term high is in place, next stop is a harvest induced low.

Chart and comments from Dave Toth, RJO tech analyst.  There is no question that the combination of waning upside momentum, an arguably complete Elliott 5 wave sequence, and historically frothy 2 year highs in the RJO sentiment index, warn of a peak reversal environment.  Longer term players are advised to pare bullish exposure and jettison remaining bullish exposure on a failure below 6340. 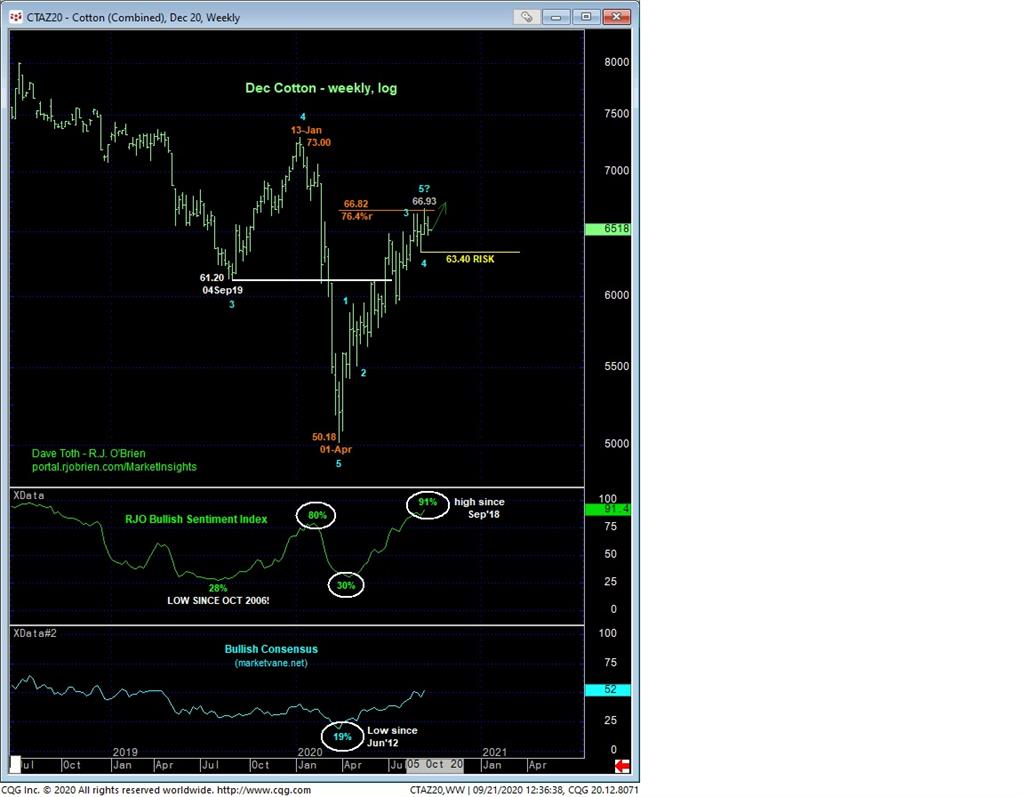 Nextgov: On TikTok, the Trump Administration Is Adopting China’s Own Vision for the Internet

Nextgov: On TikTok, the Trump Administration Is Adopting China’s Own Vision for the Internet