Water Futures
It looks like last week's big sales number was a one-off, with this week coming in at a miserly 111 krb.  Viet was high at 54, China 2nd at 45, and Mex took all the new crop sales at 51.  Shipments were 295 krb, best of this year.  Combined sales of 162 krb were in line with other weeks this year, sans last week.

California has finally taken a step to remove some, but not all, of the political and outright favoritism in the state towards water use.  A new futures contract is soon to be offered by Nasdaq later this year.  Between municipalities, environmentalists, and farmers, this should be a well-traded start-up.  We can't wait to see how the first squeeze plays out in the next drought.

Back in the good ol' days, before the Floor was closed, and when there were dozens of memberships in Memphis and Greenwood, the October contract was a real man.  Nowadays, Oct is a shadow of its glory days, with only 90 contracts in OI.  That nearly matches the cert stocks today, at 9.5k.  It was during Oct notice of 1973 when cotton nearly reached the magic $1 level, highest since the War of Northern Aggression.

Sentiment across the Board has shifted from a "buy everything, here comes inflation" mantra to the dreaded "risk off."  A lot of markets have become bloated with topwaters and excess long positions, and it takes a while to purge the weak and the old.  Copper and soy are a couple of close cousins to cotton, and their ascents and open interest warn of more long liquidation to come.  Cotton never reached a heavy net long, but had no reason to.  Rather than a bloated net long, cotton has a bloated balance sheet, as seen on the chart below.  World end stocks ratio is not quite a record, but is sky-high, tied for 3rd place all-time.


The time period for Dec from the major low last Sep to the low on 4/02, is equaled on 10/30.  The same period for the spot continuous chart indicates an equal time from low to low on 11/04.  Long term traders can watch that period for a potential low. 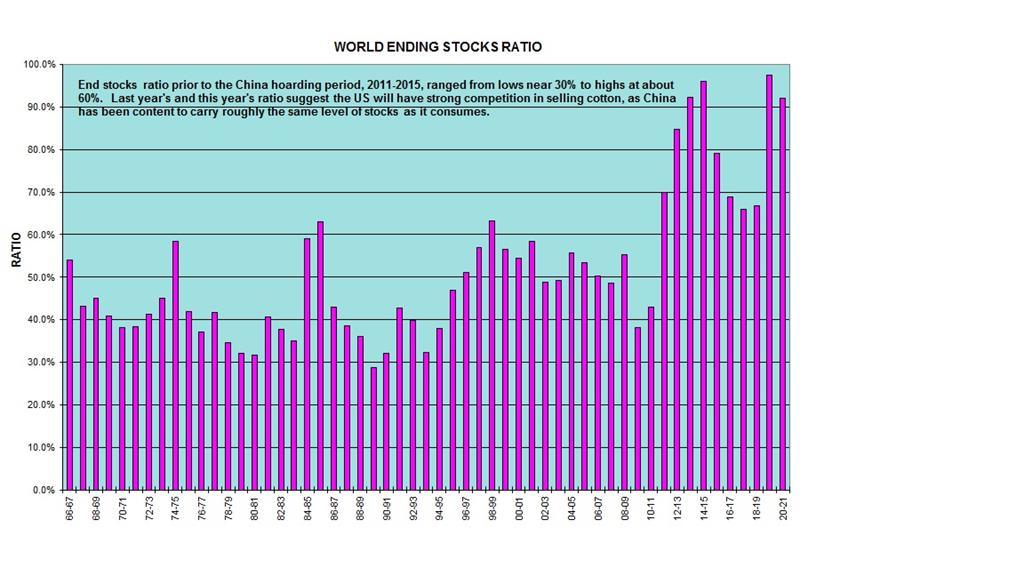 SpyGate : 137 bots stayed away from the AM trade